President Donald Trump added a new plank to his urgent push to slash taxes on corporations and reform the tax code: the ‘devastation’ wrought by Hurricanes Harvey and Irma.

Trump invoked the storms that battered Florida, leveled buildings in the Keys and left much of the U.S. Virgin Islands of St. John and St. Thomas uninhabitable.

‘With Irma and Harvey devastation, Tax Cuts and Tax Reform is needed more than ever before. Go Congress, go!’ Trump wrote on Twitter Wednesday morning.

He added in another tweet: ‘The approval process for the biggest Tax Cut & Tax Reform package in the history of our country will soon begin. Move fast Congress!’

President Trump tweeted that with hurricane devastation, ‘Tax Cuts and Tax Reform is needed more than ever before’

Congress quickly passed a relief bill in the wake of Hurricane Harvey, but that was considered a mere down payment on the massive storm, which caused widespread flooding in Texas in Louisiana.

Officials have yet to even put a number on the damaged caused by Irma, which leveled structures in the Florida Keys, up the Florida coast, and in Jacksonville.

It wasn’t immediately clear how a broad tax reform effort, sought in Congress for years, would provide immediate relief to those still without power or whose homes got destroyed. 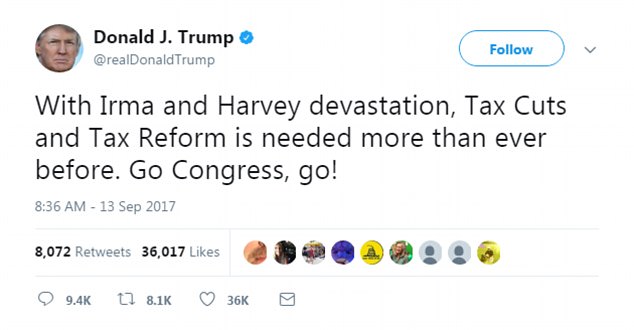 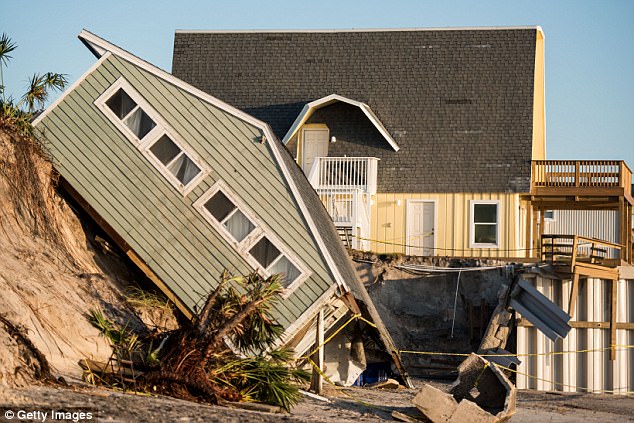 A beachfront home shows damage from Hurricane Irma on September 13, 2017 in Vilano Beach, Florida. Nearly 4 million people remained without power more than two days after Irma swept through the state 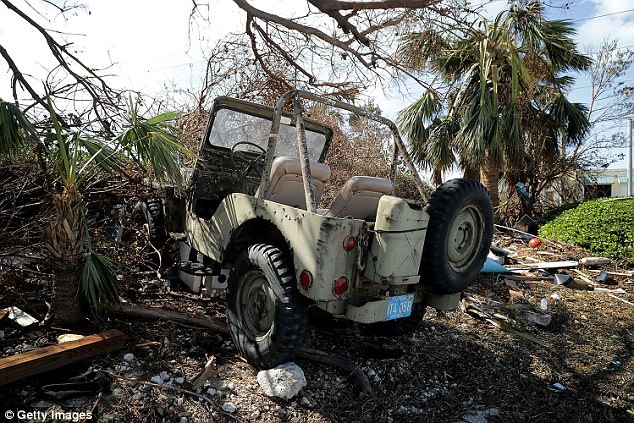 A jeep destroyed by hurricane storm surge water sits in a yard two days after Hurricane Irma slammed into the state on September 12, 2017 in Marathon, Florida. The Federal Emergency Managment Agency has reported that 25-percent of all homes in the Florida Keys were destroyed and 65-percent sustained major damage when they took a direct hit from Hurricane Irma

A list of principles released by the White House and leading Republicans stated agreement on small business tax relief, capital expensing, bringing back U.S. jobs, lower rates for ‘American families,’ and ‘ lower rates for all American businesses so they can compete with foreign ones.’

Office of Management and Budget Director Mick Mulvaney told Fox Business Network a reduction to a top corporate rate of 15 per cent was still a top goal.

‘Let’s put it this way, we’ll go to whoever will help us get it down to 15 percent. The president and I just talked not 15 minutes ago and he’s adamant about this 15 percent rate,’ Mulvaney said.

‘Pointed out, accurately by the way, that even in China or certain companies the rate is 15 percent. So to think we could compete internationally at 20 and 25 percent is not sitting very well,’ he said. 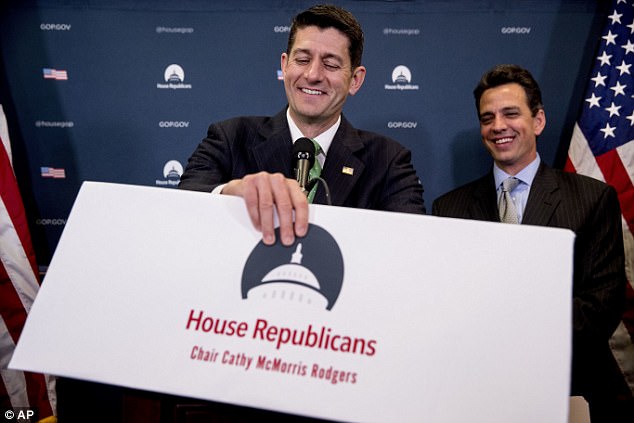 LET ME GET THIS STRAIGHT: House Speaker Paul Ryan of Wis., center, accompanied by Rep. Tom Graves, R-Ga., tries to fix a sign on his podium after a cameraman bumped it during a news conference following a GOP caucus meeting on Capitol Hill, Wednesday 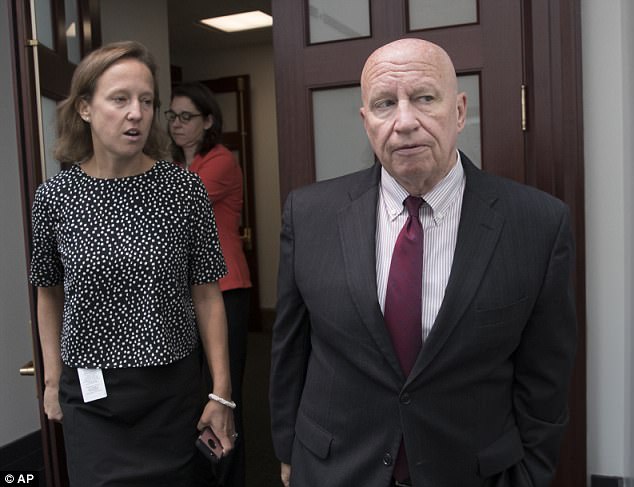 Trump was set to host Democratic and Republican House lawmakers at the White House on Wednesday, seeking to build support across the political spectrum for tax reform that he said should include tax cuts for the middle class.

The Republican president, who has shown a new willingness to engage with Democrats in recent days, discussed tax plans over dinner on Tuesday with a small group of Republican and Democratic senators as he tries to push for rapid tax legislation. 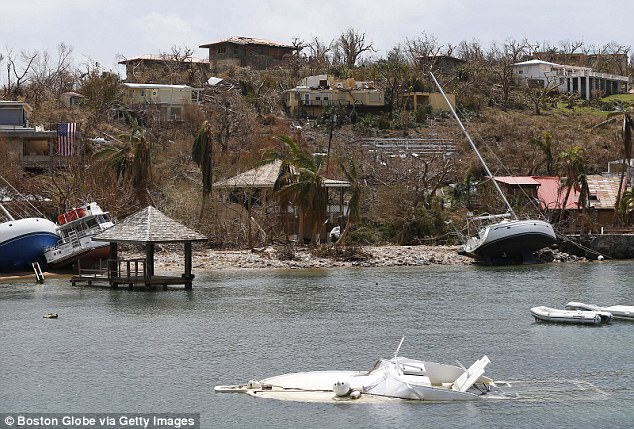 DEVASTATION: A sunken boat is seen in Great Cruz Bay on St. John in the US Virgin Islands on Sept. 12, 2017. The island was hit hard by Hurricane Irma

Several senators who attended the dinner said in television interviews on Wednesday that Trump had been clear the tax package could not be focused on wealthy Americans.

Republicans control both chambers of Congress and the party’s leaders have been trying for most of the year to come up with a detailed tax plan while ignoring the Democrats. Democrats have criticized their effort as aimed mostly at the rich.

‘The president stressed that he wants this to be a middle class tax cut,’ Republican Pat Toomey, one of the senators who attended the Tuesday dinner, told MSNBC.

Democratic Senator Joe Manchin told CBS News that Trump ‘was adamant this is not a tax cut for the rich’ and that the White House was ‘very aggressive’ on the need for a bipartisan plan.

The White House called the dinner ‘highly productive,’ saying in a statement it would ‘spur constructive discussion.’ 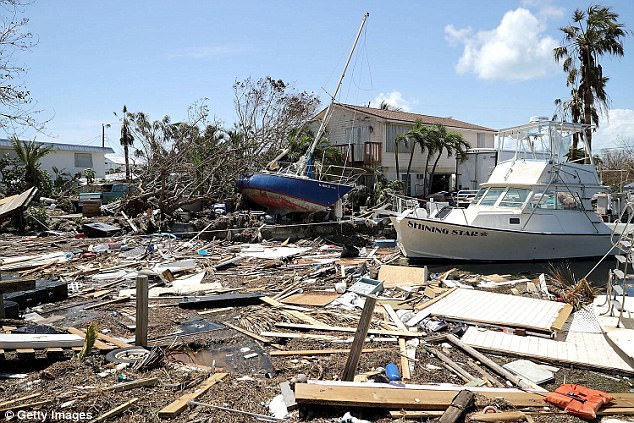 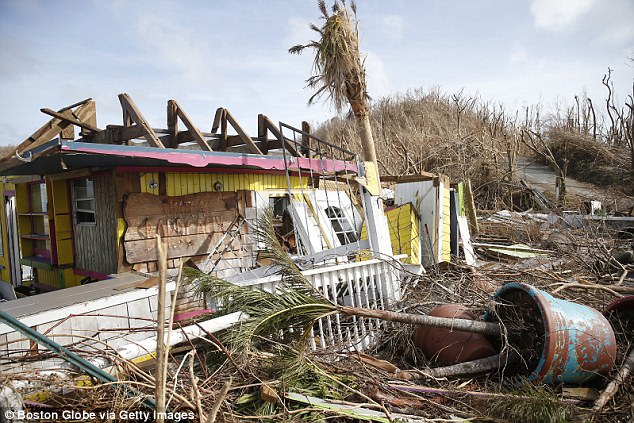 What was once a gift shop and restaurant now lays in ruins on of St. John in the US Virgin Islands on Sept. 12, 2017. The island was hit hard by Hurricane Irma

Trump is promoting his goals of a simpler U.S. tax code with lower rates, including on corporate taxes, even as a detailed plan has yet to emerge from either the White House or Congress.

He was due to meet on Wednesday with 13 lawmakers from the House of Representatives, including eight Democrats and five Republicans. House Republican leaders were also expected to give their members an update on the tax reform effort, including a general timeline to pass a bill.

‘The approval process for the biggest Tax Cut &amp; Tax Reform package in the history of our country will soon begin. Move fast Congress!’ Trump wrote.

Trump reached a surprising deal last week with Democratic leaders on fiscal issues, blindsiding Republican leaders. That led to a bill that Trump signed on Friday extending the government debt limit for three months and providing about $15 billion in hurricane-related aid.