President Donald Trump reportedly knew about the whistleblower complaint when he released the $400million in military aid to Ukraine in September.

According to The New York Times, which cited two people familiar with the matter, sources claimed that lawyers from the White House counsel’s office briefed the president on the complaint in late August.

The lawyers reportedly explained to the president that they were required to give the complaint to Congress.

The revelation that Trump may have known about the complaint before his decision to release the aid comes as investigators try to determine whether or not the aid was tied to the president’s request that Ukraine investigate former Vice President Joe Biden and his son, Hunter.

The impeachment inquiry is looking into the allegation that Trump withheld the nearly $400million in US military aid until Ukraine agreed to investigate the Bidens.

It was launched when the whistleblower revealed what was said on a July 25 phone call between Trump and Ukrainian President Volodymyr Zelensky, which the president again defended as ‘perfect’.

On Monday, hundreds of pages from Democratic Chairman Adam Schiff’s intelligence committee were being compiled into an exhaustive report that will begin to outline whether Trump engaged in ‘treason, bribery or high crimes and misdemeanors’ by withholding the $400million in aid.

The report may come as soon as next week.

Sending the case on to the Judiciary Committee, which is ready to start its own round of hearings in December, provides another chance to sway public opinion before a House vote, which is expected by Christmas, and a Senate trial in 2020.

‘The evidence of wrongdoing and misconduct by the President that we have gathered to date is clear and hardly in dispute,’ Schiff told colleagues in a letter Monday. 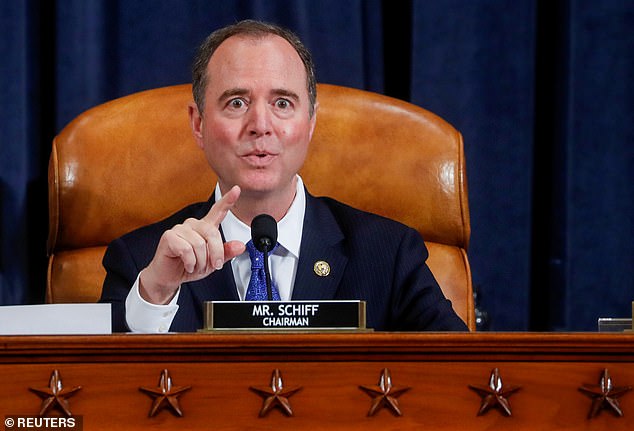 On Monday, hundreds of pages from Democratic Chairman Adam Schiff’s (pictured) intelligence committee were being compiled into a report that will begin to outline whether Trump engaged in ‘treason, bribery or high crimes and misdemeanors’ by withholding the aid

‘What is left to us now is to decide whether this behavior is compatible with the office of the Presidency, and whether the Constitutional process of impeachment is warranted.’

Republicans are not necessarily disputing the evidence but insist the president did nothing wrong.

While Trump lawyer Rudy Giuliani pursued the political investigations with Ukraine in what witnesses described as an irregular foreign policy channel, Republicans argue it’s not clear the president directly intervened to withhold the money to Ukraine.

Besides, they say, the military aid for the Eastern European ally countering Russian aggression was eventually released.