‘All of the women with whom Hunter pursued these relationships were involved in politics in some manner and Hunter sometimes met or socialized with them in professional settings,’ according to documents from the Department of Justice. 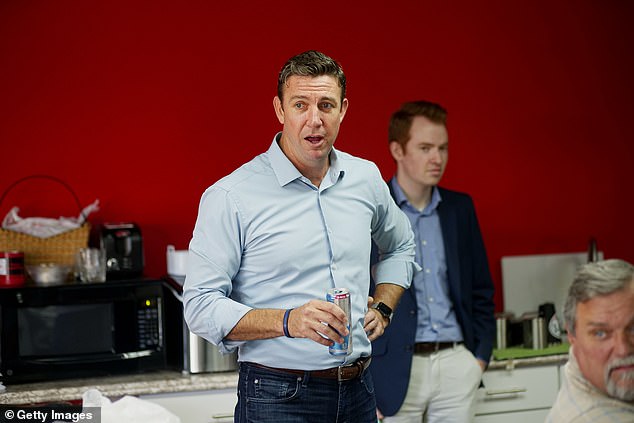 Prosecutors charged the California congressman used funds contributed to his Duncan D. Hunter for Congress Campaign to ‘carry out a series of intimate relationships’ beginning shortly after he assumed office in January 2009.

They are arguing to the judge that because the women ‘worked as lobbyists or congressional staffers,’ Hunter could claim he was justified in spending campaign funds on these ‘meetings,’ which is why they want the judge’s permission to tell the jurors about the romances.

‘At trial, the evidence will demonstrate that Hunter improperly used campaign funds to pursue these romances wholly unrelated to either his congressional campaigns or his official duties as a member of Congress,’ the document states.

Five women are cited in the prosecutors’ document.

‘Carrying out all these affairs did not come cheap – Hunter spent thousands of dollars treating women to meals, drinks, and vacations, and traveling to and from their homes,’ prosecutors charge.

The first woman is described as a lobbyist who Hunter began living with in her Washington D.C. area home. He used campaign funds to bring food and beverages to her home, they allege.

He also used campaign funds to pay for a ski vacation for the two of them in January 2010 in Lake Tahoe and to go on a double date at a Jack Ingram concert at the Birchmere Music Hall in Alexandria, Va.

In 2010, the couple went on a weekend double date with friends, one of whom was a fellow member of Congress although prosecutors do not name the lawmaker. Hunter spent $905 in campaign funds on that trip to Virginia Beach.

The next romance was with an aide who worked for the House Republican leadership.

The two began a relationship at the 2016 Republican National Convention, the documents read.

Hunter often stayed at her Washington D.C. home and ‘was careful that the pair were not seen together in public.’ 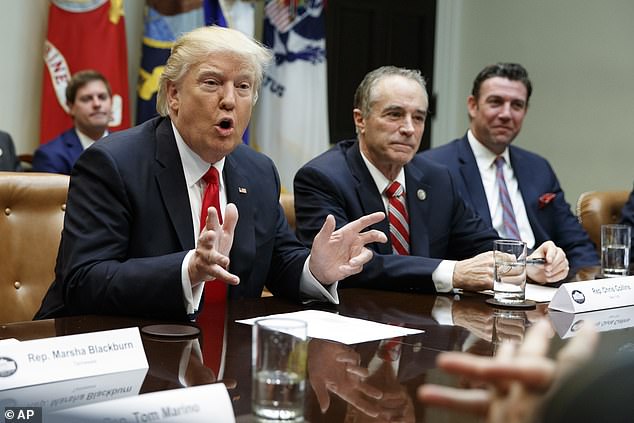 Hunter, far right, was an early supporter of President Trump

He used campaign funds to pay for drinks and ubers, including a ride back from her home to his Capitol Hill office.

His third romance was with an aide who worked in his congressional office and he used campaign funds to pay for their dates.

He paid $202 for a triple date at the H-Street Country Club in Washington D.C.

When Hunter’s high-school aged relative was in town in 2015, he used $352 in campaign funds to pay for pizza at Matchbox Pizza for the relative, the woman and a group of friends.

The fourth individual is described as a lobbyist with whom Hunter ‘engaged in intimate personal activities unrelated to Hunter’s congressional campaign or duties as a member of Congress.’

Hunter used campaign funds to pay $42 for the uber home after their encounter.

The fifth individual is a lobbyist with whom Hunter ‘engaged in intimate personal activities unrelated to Hunter’s congressional campaign or duties as a member of Congress.’

He used campaign funds to pay for the $32 uber back to his office after their encounter. 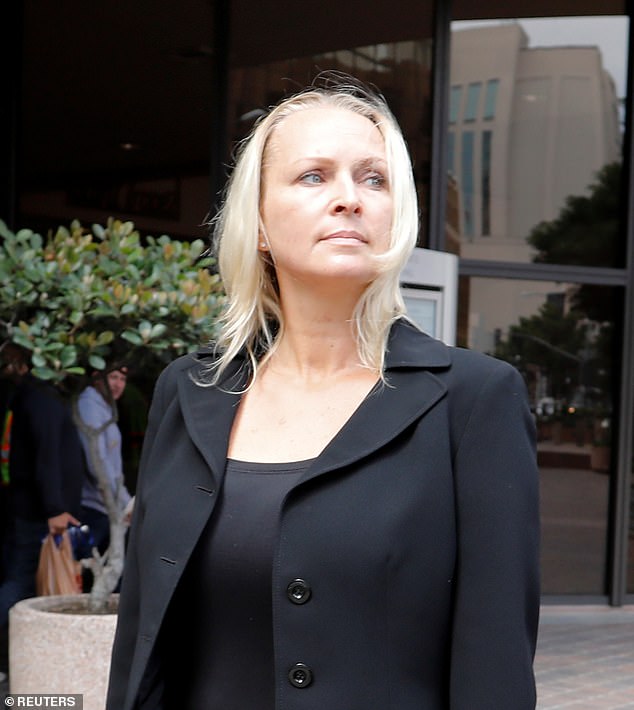 Earlier this month Margaret Hunter took a plea deal and will testify against her husband who, is being prosecuted on charges of corruption 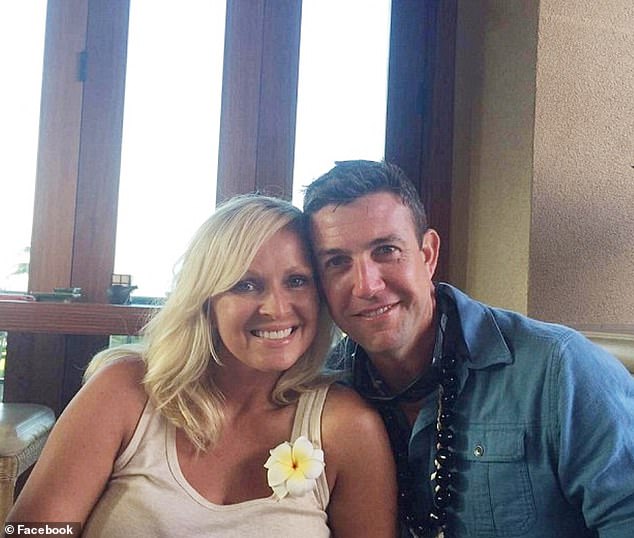 Spend, spend, spend: The couple are accused of spending on vacations to Hawaii and Italy, and spending sprees at Costco

The affairs are the latest details to emerge in the federal corruption case against Hunter.

Prosecutors allege he and his wife spent more than $250,000 in campaign money on a lavish lifestyle, bankrolling Italian and Hawaiian vacations, tequila shots and theater tickets while their household budget was in the red.

Last year, Hunter argued a ‘deep state’ conspiracy was after him.

‘I’ve never used my campaign for personal expenditures — ever,’ he said.

‘It’s the U.S. government trying to make you look bad,’ he said. ‘They can make it look however they want to make it look, we all know this.’

He won re-election in 2018 despite the charges against him.

Hunter is scheduled to go on trial in September.

Hunter, who is an ally to President Trump on Capitol Hill, also argued that two U.S. attorneys who worked on his case — Alana Robinson and Emily Allen — attended a Hillary Clinton fundraiser in 2015, and thus have a conflict of interest in his case.

The latest filing comes one day after Hunter’s legal team asked for the case to be dismissed based on the attorneys attendance at the Clinton fundraiser. The DoJ has asked for any claims of political bias to be excluded.

Earlier this month, Hunter’s wife, Margaret Hunter, plead guilty to campaign finance violations and agreed to testify against her husband at his upcoming trial.

‘I am deeply remorseful and I apologize,’ she said at the time.

Margaret Hunter could face up to five years when she is sentenced on Sept. 17. 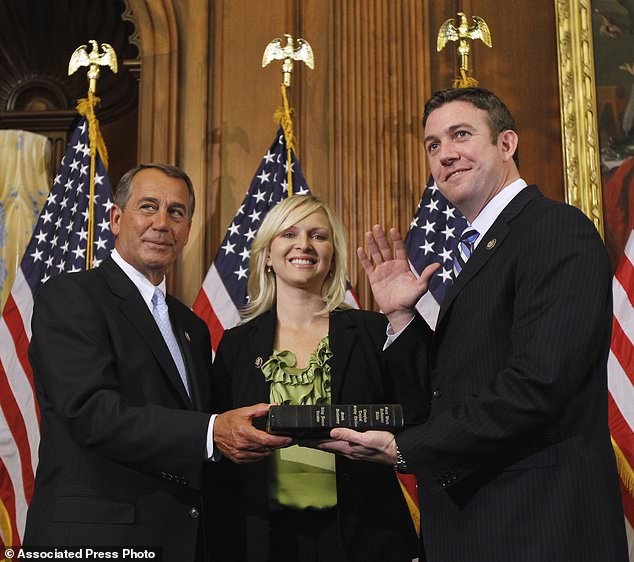 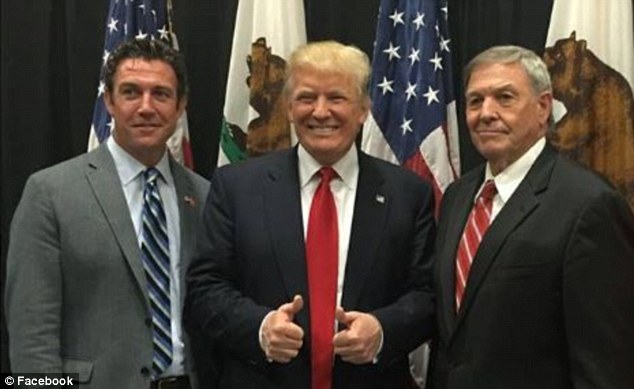 Hunter (pictured with Trump and his father, also named Duncan Hunter) was an early supporter of President Donald Trump

The couple, who have three children, pleaded not guilty last year after a federal grand jury indicted them on charges of spending campaign cash on $400 worth of tequila shots, golf outings, school tuition, and Costco shopping sprees between 2009 and 2016.

In all, prosecutors charged the Hunters with racking up $250,000 in personal expenses that they allegedly billed to his campaign.

In an August 2018 interview, Hunter blamed his wife the charges.

‘She was also the campaign manager, so whatever she did that’ll be looked at too, I’m sure,’ he said.

The original indictment revealed a lavish lifestyle the couple could not afford.

It revealed the couple overdrew their bank account more than 1,000 times in a seven year period and made purchases at a number of stores including Target, Barnes and Noble and Men’s Warehouse to charge to the campaign.

And, in one charge, Hunter is accused of dropping $462.46 in campaign funds for 30 shots of tequila and one steak at El Tamarindo restaurant during a bachelor party.

Hunter – whose father represented the same San Diego area for decades as a member of Congress – was seen as an up-and-coming Republican star.

A former Marine, he served three tours as an artillery officer in Afghanistan and Iraq, fighting in some of the bloodiest battles in Fallujah. 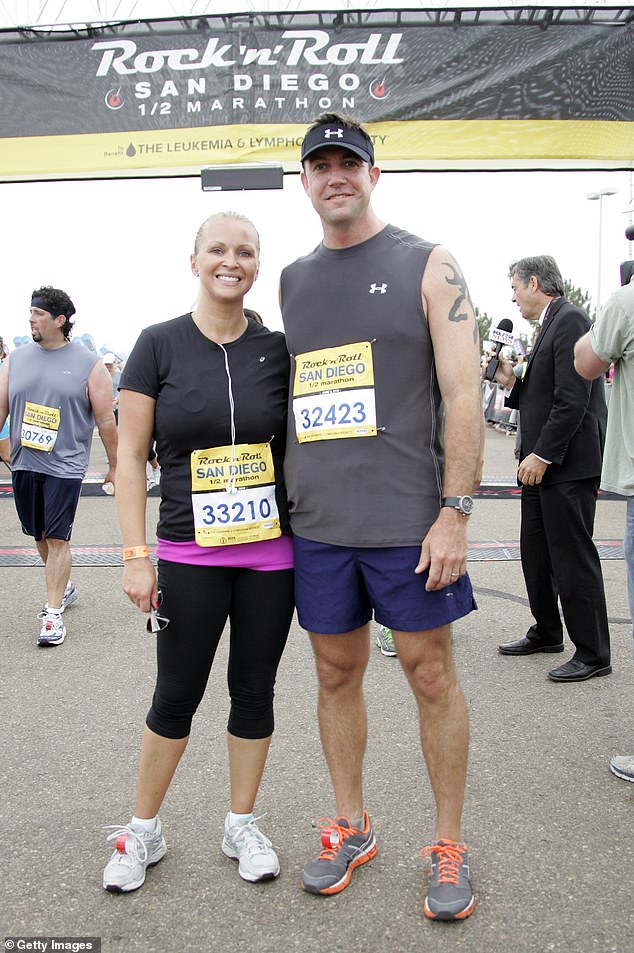 In February, Politico reported many of Hunter’s Capitol Hill colleagues saw him as a promising young lawmaker who appeared to have lost his way.

He gained a reputation for drinking heavily and carousing. There were reports he was involved with several women in Washington, which Hunter called ‘tabloid trash.’

Hunter’s office said at the time that one of the charges he repaid was a $600 fee for flying a pet bunny with his family.

There was no intent to stick donors with the cost, Hunter spokesman Joe Kasper said at the time. The congressman used airline miles to pay for his family’s travel and there was an assumption that bringing along the rabbit would not incur an extra charge, Kasper told The Associated Press.

When Hunter found out his campaign had paid for the rabbit’s transport, he paid back the money as part of more than $60,000 in other questionable charges, Kasper said.