Donald Trump sought to distance himself Monday from federal charges leveled against his former campaign chairman, saying on Twitter that the crimes alleged against Paul Manafort concerned activities that took place long before his White House campaign.

‘Sorry, but this is years ago, before Paul Manafort was part of the Trump campaign. But why aren’t Crooked Hillary & the Dems the focus?????’ the president tweeted.

Minutes later he insisted in a second tweet: ‘….Also, there is NO COLLUSION!’

That last note is meant to push back against nonstop claims from Democrats that his campaign worked hand-in-glove with Russia to tilt the results of last November’s election.

Trump has lately been on a digital rampage about reports that the Hillary Clinton campaign and the Democratic National Committee funded an opposition research project last year that resulted in a discredited ‘dirty dossier’ full of salacious claims about him.

President Trump pounced on Monday, denying Manafort’s alleged crimes predated his campaign and insisting that he never colluded with Russia to affect the 2016 election 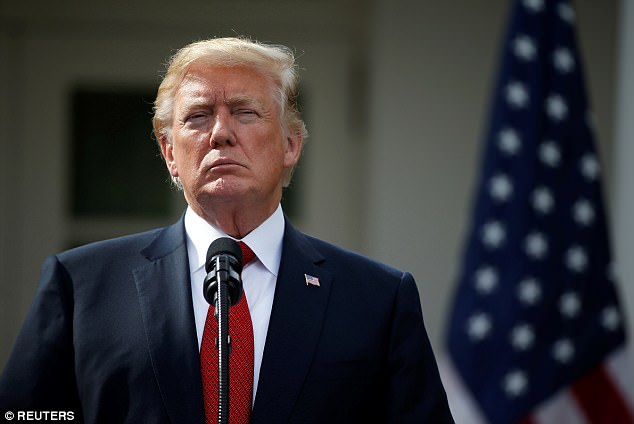 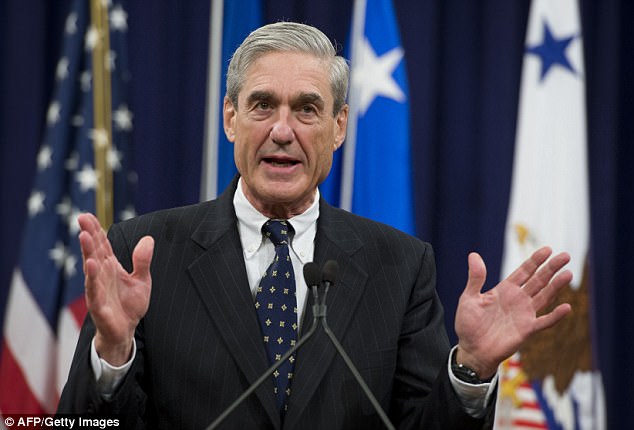 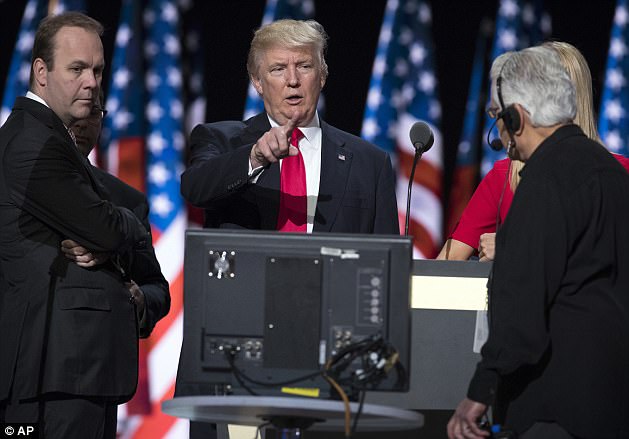 Trump campaign aide Rick Gates, shown at left during the Republican National Convention, is also being told to turn himself in

The indictments against Manafort and his former protege Rick Gates are purely focused on alleged financial crimes and do not include any charges related to the broader question of campaign collusion with Moscow.

It does describe criminal allegations that predate the Trump campaign; Trump’s name is not mentioned in the 31-page document.

Manafort and Gates surrendered to federal authorities on Monday as the first charges from a wide-ranging probe of possible Russian meddling in the 2016 U.S. presidential election were unsealed.

The pair appeared at FBI headquarters to be processed and left on their own recognizance after just a few hours. 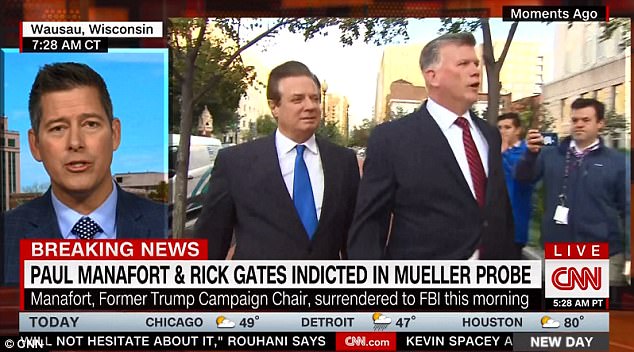 The government alleges that at least $75 million was moved by Manafort to offshore accounts without declaring the income to the government. Form there Manafort allegedly withdrew $18 million to fund a lavish lifestyle, and Gates pulled another $3 million out.

Among the expenses paid for by Manafort-controlled entities in Cyprus, according to the indictment, were $600,000 for antiques and $500,000 paid to a Beverly Hills tailor.

Other money went for premium automobiles and home renovations in Florida and the Hamptons. 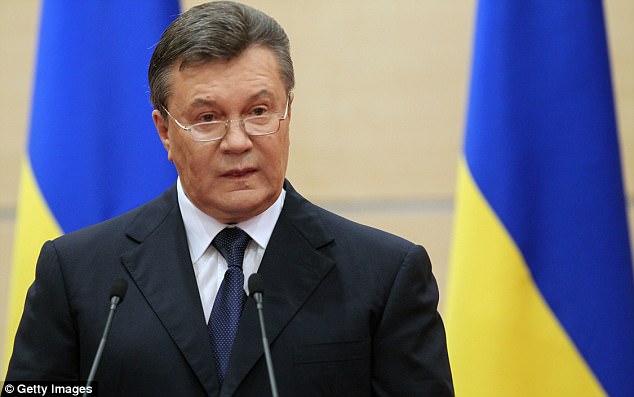 Democratic National Committee Chair Tom Perez said in a statement that the indictment ‘underscores the seriousness of the investigation into Donald Trump’s ties to Russia. It’s time for Republicans to commit to protecting this investigation and preserving the rule of law.’

‘Even with an accelerating Special Counsel investigation inside the Justice Department, and investigations inside the Republican Congress, we still need an outside, fully independent investigation to expose Russia’s meddling in our election and the involvement of Trump officials,’ she said.

‘Defending the integrity of our democracy demands that Congress look forward to counter Russian aggression and prevent future meddling with our elections.’

Manafort and Gates were the one-two punch responsible for keeping Republican National Convention delegates in line last year as the possibility emerged of a contentious floor fight over the presidential nomination.

Manafort was fired shortly after the convention and replaced by pollster Kellyanne Conway, but Gates stayed on and was more recently working to help close out the financial books of Trump’s inaugural committee.

He had worked for Manafort’s international firm, Davis Manafort Partners, from 2006 to 2007.

The move to throw Manafort overboard came after reports that Manafort pocketed at least $12 million in undisclosed payments from Viktor Yanukovych, the pro-Russia former Ukrainian president.

Manafort and his firm spent years as Yanukovych’s political consultants.

The Justice Department’s indictment charges that Manafort and Gates ‘generated tens of millions of dollars in income as a result of their Ukraine work.’

‘In order to hide Ukraine payments from United States authorities, from approximately 2006 through at least 2016, Manafort and Gates laundered the money through scores of United States and foreign corporations, partnerships and bank accounts,’ it continues. Manafort hid his face from reporters who were staking out his house in Alexandria, Virginia

Mueller’s probe focused on wire transfers Manafort made from Ukraine to private accounts and whether he paid taxes on that income.

In July the FBI in July executed a surprise search warrant with guns drawn at Manafort’s home in Alexandria, Virginia, seizing financial and tax documents.

It’s unclear if Manafort is the biggest fish in Mueller’s sights, or if the former FBI director intends to squeeze him for information more directly related to the 2016 election and Russia’s possible interference with it.

That tweet came a half-hour before news broke that Manafort and Gates had been indicted. The White House hasn’t yet commented on their surrender.

Master of distraction: A half-hour before Manafort’s indictment was unsealed, President Trump tweeted about an alleged money-funnel between Democrats and the opposition research firm behind the discredit ‘dirty dossier’ about him

Mueller, a former director of the Federal Bureau of Investigation, has been looking into possible links between Trump aides and foreign governments, as well as potential money laundering, tax evasion and other financial crimes, according to sources familiar with the probe. He also is exploring whether Trump or his aides have tried to obstruct the investigation.

Mueller was appointed to lead the investigation a week after Trump’s May 9 firing of FBI Director James Comey, who was heading a federal probe into possible collusion with Russia.