The former businessman is having a private discussion with the tech titan in the Oval Office today that was primarily expected to be about trade.

Cook was seen entering the White House on Wednesday afternoon through the entrance of the West Wing. He had been at the White House the previous evening as a guest of the president’s at Trump’s first state dinner. 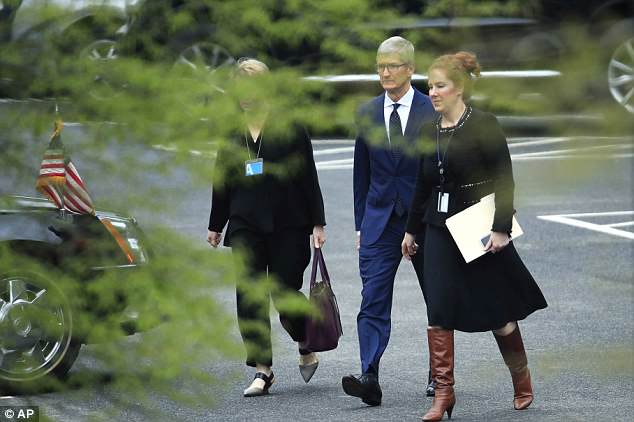 Oval Office arrival: Tim Cook walked to the White House having spent the day in Washington after Tuesday’s state dinner for the Macrons In the front row: Tim Cook was at the top table at the state dinner for Emmanuel and Brigitte Macron in the WHite House, seated beside the French first lady No t-shirt and hoodie: Tim Cook arrived for the Macron dinner with Lisa Jackson, who was an EPA administrator for the Obama administration and is now Apple’s environmental head

Trump indicated in a tweet on Wednesday morning that he wanted to speak to Cook, whose company’s largest manufacturing partner is a Chinese company, about trade imbalances.

‘We will be talking about many things, including how the U.S. has been treated unfairly for many years, by many countries, on trade,’ Trump said in the tweet on the meeting he claimed to be ‘looking forward’ to having.

Jackson is currently Apple’s vice president of Environment, Policy and Social Initiatives, a role that has her reporting directly to Cook.

Her bio on Apple’s website says she oversees the company’s ‘efforts to minimize its impact on the environment by addressing climate change through renewable energy and energy efficiency, using greener materials, and inventing new ways to conserve precious resources.’ Foxconn’s plant in Zhengzhou is the the largest iPhone factory in the world.

Trump is trying to lure Foxconn to the U.S. It’s planning to build a $10 billion LED factory in Wisconsin.

The president claimed last summer that Foxconn founder Terry Gou told him privately that he could triple the investment to $30 billion, creating a bonanza of jobs in the Rust Belt.

Trade was on the menu on Wednesday, Trump said, as he sat down with Cook.

Worldwide steel and aluminum tariffs are on the way, in addition to another $60 billion in tariffs just for Chinese imports, as Trump tries to even out the United States’ $375 billion trade deficit with the competing nation.

Trump said he could put another $100 billion in tariffs on China as it announced retaliatory actions. He has not made good on the threat following Chinese President Xi Jinping’s promise to reduce auto tariffs and introduce new intellectual property protections for U.S. businesses operating in his country.