Trump mocks ‘lowly rated CNN and others’ after MAGAbomber package

Donald Trump tore into ‘CNN and others’ on Friday morning for ‘criticizing him over the MAGA-bomber pipe bombs’, just days after the network itself was targeted with one of the devices.

In a tweet posted at around 3.00am EST, Trump slammed CNN for ‘comparing the pipe bombs to the 9/11 attacks and the Oklahoma City bombing’, and argued he was receiving unwarranted abuse for his criticism of the network.

His tweet read: ‘Funny how lowly rated CNN, and others, can criticize me at will, even blaming me for the current spate of Bombs and ridiculously comparing this to September 11th and the Oklahoma City bombing, yet when I criticize them they go wild and scream, ‘it’s just not Presidential!’

Trump had earlier posted a portion of the tweet, before deleting it moments later – sending Twitter users into a spin about its potential meaning. 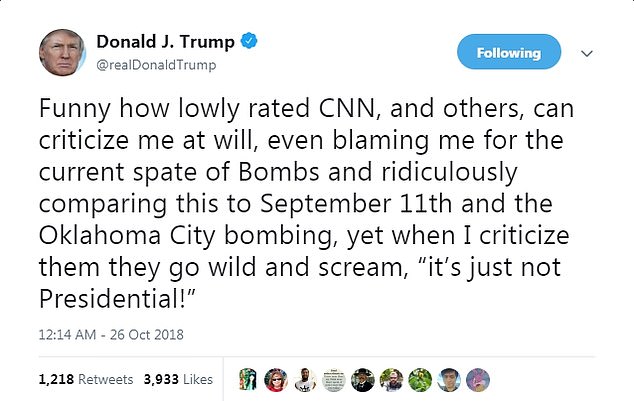 The tweet was posted at around 2.30am EST slammed CNN for ‘comparing the pipe bombs to 9/11’

Trump’s barrage comes just two days after CNN was sent a letter filled with explosives by the so-called ‘MAGA-bomber’ who has targeted enemies of the President including Barack Obama and Hillary Clinton.

The nationwide investigation widened on Thursday after three new explosive packages addressed to Robert De Niro and Joe Biden were seized in New York and Delaware.’

The latest devices are similar to others found this week targeting prominent Democrats.

Authorities were scrambling to find those responsible for the 10 devices that politicians on both sides of the aisle have branded terrorism as they warned that more packages could be out there.

Hours before the President’s tweet, CNN analyst Stephen Collinson said that Trump had been ‘unable to bring the country together’ in the way George Bush had after the 9/11 attacks.

‘Trump may simply be unable to summon the words and the aspiration to bring the country together — as President George W. Bush did on a pile of rubble after 9/11 — or he may not even want to do so,’ Collinson wrote on Friday.

While New York Times Columnist Michelle Goldberg also levelled criticism at the President yesterday, calling his attempt to blame the media for the pipe bombs ‘an audacious act of misdirection’ and saying ‘the blame belongs with Trump’. 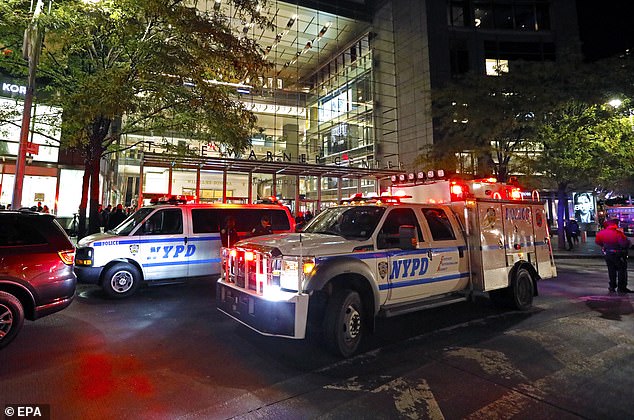 Trump doubled down on his rebuke of the media on Thursday morning, saying ‘fake news’ had a part to play in inciting the pipe bomb attacks.

Echoing comments he made at a rally in Wisconsin, Trump said in a tweet: ‘A very big part of the Anger we see today in our society is caused by the purposely false and inaccurate reporting of the Mainstream Media that I refer to as Fake News.

‘It has gotten so bad and hateful that it is beyond description. Mainstream Media must clean up its act, FAST!’

Sarah Sanders, the White House press secretary, also claimed the media has a ‘role to play’ in abating the divisiveness. She refused to lay any of the blame for the attempted violence and the charged political discourse at the president’s feet as she addressed the press for the first time since the suspicious packages began arriving.

‘The president’s condemned violence in all forms, has done that since day one, will continue to do that, but certainly feels that everyone has a role to play,’ she told DailyMail.com.

Asked a second time, Sarah Sanders said: ‘There’s a big difference made between comments made and actions taken. The president is certainly not responsible for sending suspicious packages to someone — no more than Bernie Sanders was responsible for a supporter of his shooting up a Republican baseball field practice last year.

‘The idea that this is at the hands of the president is absolutely ludicrous,’ she contended.