Donald Trump personally ordered for a statue of a Confederate general to be put back up after protesters against racial injustice toppled and burned it last week, and he is reportedly preparing to announce a mandate against the removal of monuments.

The Albert Pike monument is the only outdoor one in Washington DC that commemorates a member of the confederacy and on June 19 – the Juneteenth holiday to celebrate the emancipation of African American slaves – it was vandalized and later removed.

However two sources told NBC News on Wednesday that President Trump personally called Interior Sec. Bernhardt and asked the Park Service to put back up the statue of Pike, who was a senior officer of the Confederate States Army who commanded the District of Indian Territory in the Civil War.

The White House did not provide an on-the-record comment about the statue potentially returning but an Interior Department spokesperson told correspondent George Bennett: ‘The Secretary has made his position quite clear when it comes to lawlessness, violence against police, and destruction of public property.’ 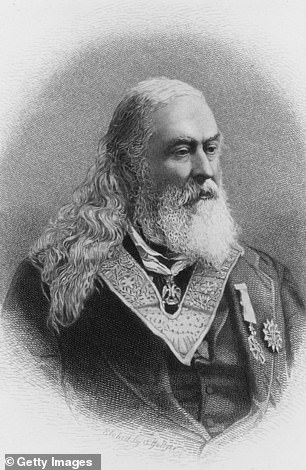 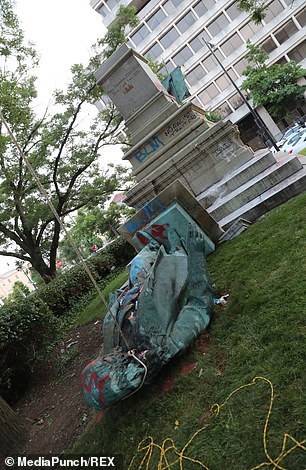 Two sources told NBC News on Wednesday that President Trump personally called Interior Sec. Bernhardt and asked the Park Service to put it back up. Albert Pike is pictured left. Pike was a senior officer of the Confederate States Army who commanded the District of Indian Territory in the Civil War. 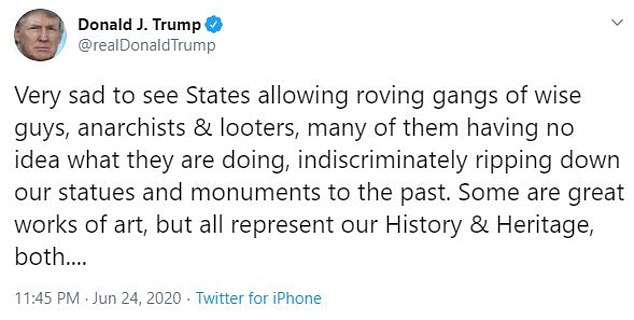 Trump tweeted that the protesters are ‘anarchists & looters’ and claimed the the toppling of the statues was random and meaningless and insisted: ‘Some are great works of art, but all represent our History & Heritage, both the good and the bad’

He said: ‘It is important for us to understand and remember, even in turbulent and difficult times’ adding that ‘knowledge comes from the most unusual of places

‘Very sad to see States allowing roving gangs of wise guys, anarchists & looters, many of them having no idea what they are doing, indiscriminately ripping down our statues and monuments to the past,’ he tweeted Wednesday night. ‘Some are great works of art, but all represent our History & Heritage, both the good and the bad.

‘It is important for us to understand and remember, even in turbulent and difficult times, and learn from them. Knowledge comes from the most unusual of places!’

The statue was up in to Judiciary Square, lone street over from the DC police HQ.

It came as Trump blasted political leaders for not being tougher on Americans who have also been protesting against police brutality.

Meanwhile, Trump has been working on an executive order that would strengthen laws protecting historical statues and he said earlier this week it would include up to 10 years in prison for anyone who vandalizes or destroys any monument, statue or other such federal property.

‘We are going to come out with a strong executive order,’ Trump said in a press briefing on Wednesday. ‘I should have that by the end of the week, which is fast approaching. We are going to have a very powerful statement.’

Numerous statues towering over visitors to parks and other public places have come down in recent weeks amid a global discussion on the lasting mark of slavery, which served as the economic backbone of the American South until the end of the Civil War (1861-1865), and has left a on both daily culture and stereotypes and perceptions of the region. 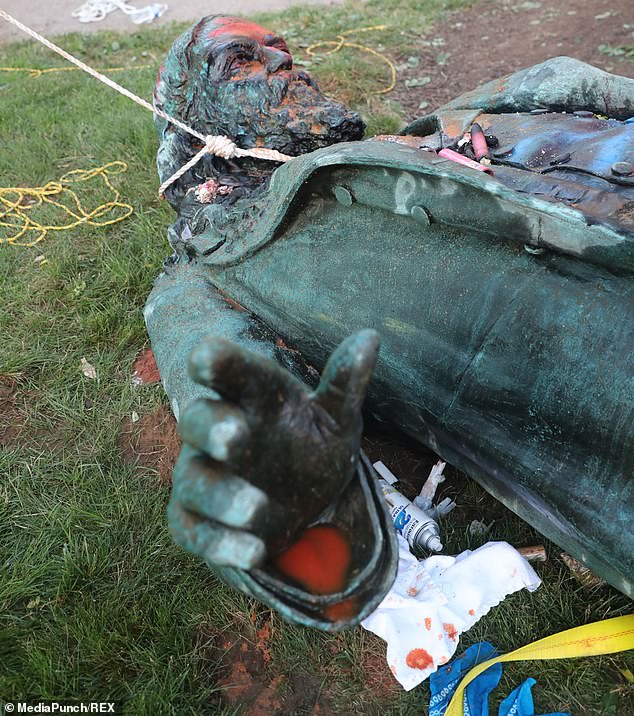 The statue was up in to Judiciary Square, lone street over from the Washington DC police HQ

In Virginia, where some of the first English colonies were established before becoming the heart of American slave country, protesters have called for the removal of a statue of General Robert E Lee, the leader of the Confederate army.

The statue, whose pedestal has already been covered with anti-racist graffiti, has held pride of place for a century in Richmond, the wartime Confederate capital.

Trump is of the belief that taking down Confederate statues from these public places will destroy US history and culture. But others argue that keeping them up in neutral spaces – as opposed to a museum – continues to glorify oppression and influence systemic racism.

Americans have complained that when it came creating these works, the oppressed figures represented in some of them did not have a say in how they were depicted.

However Trump said Tuesday: ‘We are looking at long-term jail sentences for these vandals and these hoodlums and these anarchists and agitators and call it whatever you want.

‘Some people don’t like that language, but that’s what they are. They’re bad people. They don’t love our country. And they’re not taking down our monuments, I just want to make that clear.’

The city of New York decided to remove a statue of the 26th president, Teddy Roosevelt, from the entrance of the American Museum of Natural History last week.

The move, decried by Trump, came after the city said the statue — Roosevelt on horseback, while a black man and a Native American walk beside him — represents colonialist and racist views.

In a statement from the museum, Mayor Bill De Blasio said the statue ‘explicitly depicts Black and Indigenous people as subjugated and racially inferior.’

The museum noted that Roosevelt – whose father is a co-founder of the museum and who has numerous monuments and areas named after him inside – was considered a progressive environmental defender at the start of the 20th century, but that the statue’s depictions were ‘racist.’

Roosevelt’s great-grandson, a museum trustee – said it’s time to take down the statue and move forward.

Demonstrators in Portland toppled a statue of George Washington and Thomas Jefferson, two former presidents who were also slave owners.

And protesters in San Francisco toppled the statue of former President Ulysses S. Grant, who led the Union Army during the Civil War, but also married into a family that owned slaves.