President Donald Trump says he plans to designate Mexican drug cartels as terrorists over their role in drug and human trafficking.

He pledged to take action in an interview with conservative media personality Bill O’Reilly that aired on Tuesday.

The move would allow Washington to intervene south of the border to combat the cartels.

‘They will be designated … I have been working on that for the last 90 days. You know, designation is not that easy, you have to go through a process, and we are well into that process,’ Trump said.

The announcement came after a formal petition to declare cartels as terrorists was posted on the White House’s website.

Trump added: ‘At some point something has to be done. We’re losing a hundred thousand people a year to what’s happening and what’s coming through from Mexico. And [the Cartels] have unlimited money because it’s drug money and human trafficking money”

Mexico’s foreign minister Marcelo Ebrard had previously said on Monday that he did not expect the United States to make such a move.

‘I don’t think the United States will pursue this path because we’re working together, and I don’t think they would want to open up the possibility of Mexico invoking the same legal principles,’ Ebrard told reporters.

Mexican media reported that the White House petition was linked to the massacre earlier this month of three mothers and six children of dual U.S.-Mexican nationality in an ambush by suspected cartel gunmen in northern Mexico.

Ebrard said that in the event drug gangs were designated as terrorists it could, under U.S. law, enable the United States to act directly against the threat if it so chose. 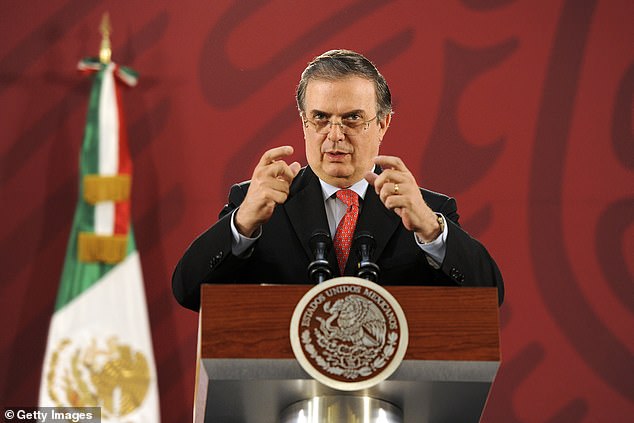 Mexico’s foreign minister Marcelo Ebrard, pictured, had previously said on Monday that he did not expect the United States to make such a move

Trump responded quickly to the massacre of the women and children, who came from families of U.S. Mormon origin that settled in Mexico decades ago. He urged Mexico to join him in wiping out the drug cartels.

Mexico invited the FBI to cooperate in the investigation to find the killers, and local media reported that dozens of vehicles from the bureau entered the country this month.

Still, Trump’s response stirred fears he could exploit the cartel violence to put pressure on Mexico during his bid for re-election next year, just as he did over illegal immigration in his first tilt for the presidency.

Speaking alongside Ebrard, President Andres Manuel Lopez Obrador said Mexico had to resolve its own security problems and would never accept any intervention from abroad.

For its part, Mexico has pressed the United States to classify the August shooting of 22 people, including eight Mexican citizens, in El Paso, Texas, as an act of terrorism.

The White House petition will need some 100,000 signatures by Dec. 24 in order to trigger a written response from the Trump administration, though it would not require any specific action.