Former pancake box character Aunt Jemima was a ‘picture of the American Dream’, a speaker at a Donald Trump rally in Arizona claimed last night.

Reagan Escudé told spectators at the Students for Trump event that a ‘leftist mob’ was trying to ‘erase the legacy’ of the freed slave Nancy Green who first played the character in the 1890s.

The Aunt Jemima brand was scrapped after 130 years last week amid the cultural reckoning unleashed by the death of George Floyd in Minneapolis.

Quaker Foods said it ‘recognizes Aunt Jemima’s origins are based on a ‘racial stereotype’ of a black ‘mammy’ who is portrayed as happy to serve a white master.

Escudé was introduced by the president as a ‘target of liberal cancel culture’ after she lost her insurance job for criticizing the Black Lives Matter movement and saying that white people should not ‘apologize for your whiteness’.

Escudé spoke to around 3,000 people who crowded into the Dream City church to hear the president in Phoenix on Tuesday night.

The Northwestern State University of Louisiana graduate told the audience how she had been fired after posting a controversial video during the Floyd protests.

She criticized church leaders for supporting the Black Lives Matter movement, saying that ‘I’ve seen pastors call for white congregants to kneel and to apologize for the skin God gave them’ – drawing boos from the crowd.

Escudé went on to say: ‘I share this story with you because what happened to me is just a small example of something that’s happening on a much larger scale in our nation.

‘Aunt Jemima was cancelled. If you didn’t know – Nancy Green, the original Aunt Jemima, she was a picture of the American Dream.

‘She was a freed slave who went on to be the face of the pancake syrup that we love and have in our pantries today.

‘She fought for equality and now the leftist mob is trying to erase her legacy. And might I mention how privileged we are as a nation if our biggest concern is a bottle of pancake syrup.’

‘It’s not MY biggest problem by a mile. NO ONE I know is marching and protesting during a pandemic over Aunt Jemima or pancakes.’ 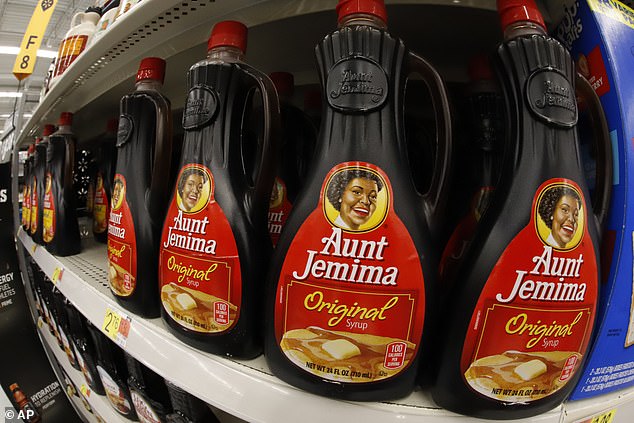 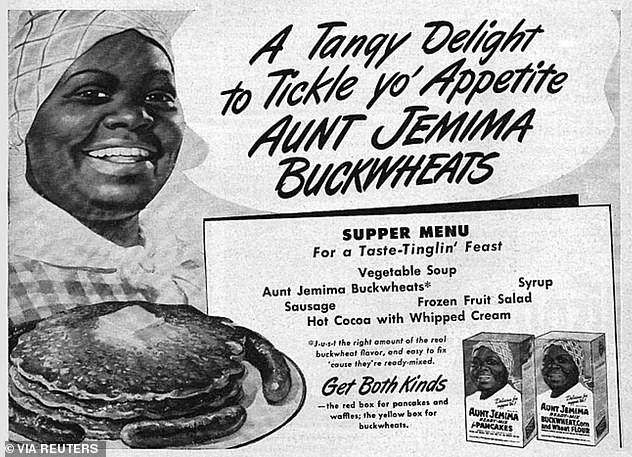 An Aunt Jemima advert from the 1940s. The image is based on the ‘racial stereotype’ of a black ‘mammy’ who is portrayed as happy to serve a white master

The brand got its name from the minstrel song ‘Old Aunt Jemima,’ which was composed by African-American comedian and performer Billy Kersands.

Chris Rutt, who created the pancake flour in 1889, was inspired by the song after hearing it during a minstrel performance and decided to co-opt the name.

The company was then sold to a larger milling firm which hired Nancy Green, a former slave who was working as a cook for a judge, to act as Aunt Jemima.

Green herself continued her work as a housekeeper and died in 1923 after being hit by a car.

‘We recognize Aunt Jemima’s origins are based on a racial stereotype,’ said Kristin Kroepfl of Quaker Foods North America.

‘While work has been done over the years to update the brand in a manner intended to be appropriate and respectful, we realize those changes are not enough.’

Escudé is an ambassador for right-wing organization Turning Point USA, a movement with chapters at high schools and colleges across the country. 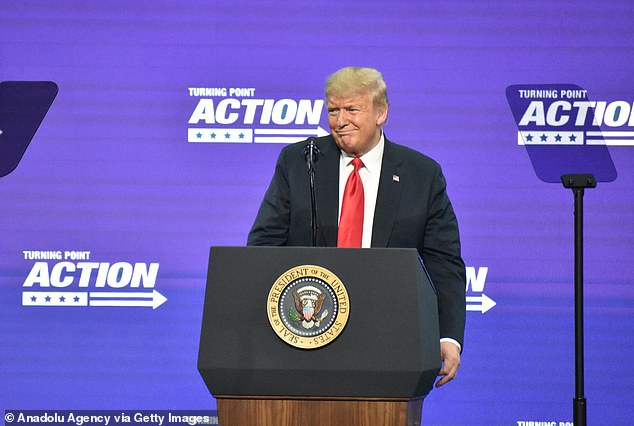 Escudé said she was fired from her first job at an insurance firm in Louisiana after posting on social media about the Black Lives Matter movement.

She said a former colleague had urged people to call her employers and demand she be sacked, which she subsequently was.

In her Instagram video on June 4, Escudé had called Floyd’s death an ‘injustice’ but said that ‘we as Christians should not support the Black Lives Matter movement’.

‘The cop’s actions are not a result of systemic racism,’ she said, referring to white police officer Derek Chauvin who is accused of murdering Floyd.

Escudé said that racism is ‘a sin problem that can only be reconciled through Jesus Christ’, adding that ‘we don’t need a movement for that’.

She also suggested that ‘all this rioting and destruction that we’re seeing right now’ is the result of ‘fatherlessness’ in the black community.

‘You are not virtuous because you support a movement. You are not glorifying God when you apologize for your whiteness,’ she said.