Trump reels off list of times he was ridiculed but then proven right, from hydroxy, to Wuhan

Donald Trump has reeled off the times he was blasted for spreading lies and conspiracy theories – only to later be proven right.

Speaking via satellite link from his Bedminster, New Jersey golf course at the Frank Speech Rally in New Richmond, Wisconsin the former president recalled how he’d been blasted for saying hydroxychloroquine was a treatment for COVID, that the virus leaked from a Wuhan virus lab, and that Hunter Biden’s laptop was real.

He said: ‘We were right! Listen to this: Hydroxychloroquine works. The virus came from a Chinese lab – it just came out. Hunter Biden’s laptop was real. They tried to say it was made by Russia. Russia. Russia. Russia,’ he started.

‘Lafayette Square was not cleared for a photo op. That just came out and I want to thank the Inspector General for having the courage to come out with the truth. The ‘Russian Bounties’ story was fake. Remember that? We produce vaccines before the end of 2020 in record time.’

Trump touted hydroxy – previously used as an anti-malaria drug, throughout last spring, and even took it as a precaution. He was condemned for doing so, with medics saying there was no evidence the treatment helped COVID.

But preliminary research released earlier this week showed hydroxychloroquine can increase survival rates in seriously-ill COVID patients by 200 per cent.

Trump has long claimed COVID may have leaked from the Wuhan Institute of Virology. He was dismissed as a quack over that theory throughout much of 2020. It is now being taken far more seriously, although no definitive proof of where COVID came from has been established.

He has repeatedly attacked liberal-leaning media outlets for failing to cover the damaging contents of Hunter Biden’s laptop, and was cleared earlier this week of claims he’d cleared protesters from outside the White House to stage a photo opportunity amid George Floyd protests last year.

Trump also reminded the crowd of how he’d been shot down when claiming COVID vaccines would be ready by the end of 2020 – only to later be proven spectacularly right.

He said: ‘The vaccines are saving the country and frankly the world. This would have been another 1917 situation where you lost a 100 million people like in the Spanish flu. Everybody said it would take 3,4,5 years. Don’t even do it because it’s going to take so long. I got it done in less than nine months. All of the people that have been able to get their shots. Nobody would have been able to get it yet. But remember, it’s also about freedom, so it’s your choice.’

The former president also discussed the fraudulent 2020 election which he continues to claim he won, before rallying the gathered crowd with his MAGA  message and the ongoing movement. 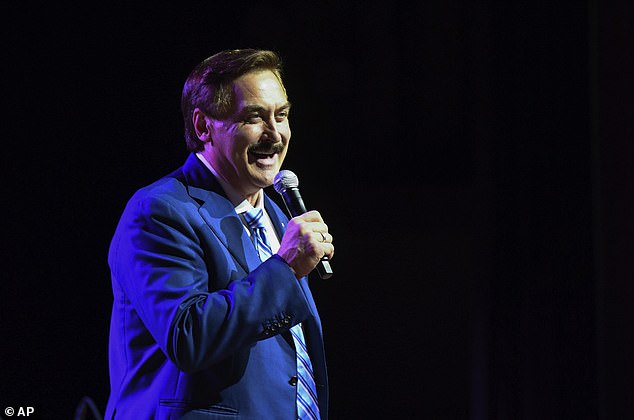 Trump made his remarks during a rally organized by conspiracy theorist MyPillow CEO Mike Lindell, pictured, a staunch supporter of the former president

Trump made his remarks during a rally organized by conspiracy theorist MyPillow CEO Mike Lindell, a staunch supporter of the former president.

Trump together with Lindell promoted baseless conspiracy theories about the 2020 election with Trump saying that it was ‘rigged’ by President Joe Biden and the Democrats, while bemoaning the fact he was no longer allowed on social media.

The former president has yet to share any definitive proof that last year’s election was rigged, despite employing a large team of lawyers to do so.

‘We do press releases now because we were banned from Facebook, Instagram and Twitter. They want to silence us because of the election. Cancel culture, call it what you will, but the reason is because of the election,’ Trump said. ‘They know the results. They know what really happened. That’s why if you go to any place, and you will see the Democrats don’t want recounts. They don’t want audits.

During his Saturday remarks, Trump insisted the 2020 election was ‘totally rigged.’ 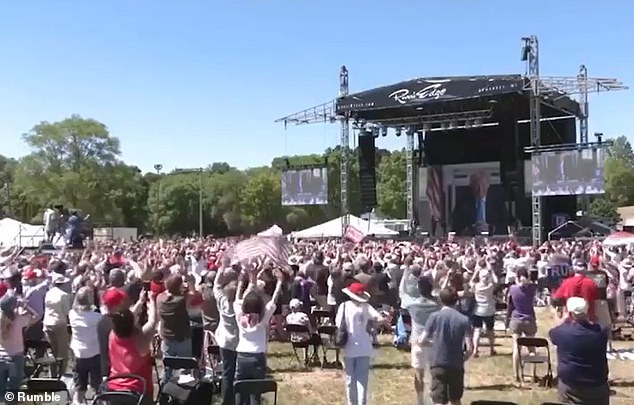 Trump appeared on a jumbotron as he spoke to people gathered at the River’s Edge Apple River concert venue in New Richmond, Wisconsin

‘The election was rigged like never before. We got ’em by surprise four years ago and then we got 12 million more votes. Think about it, we got 63 million votes and we won, and then we got 75 million votes and they say we lost. But we didn’t lose. If you win Miami, if you win Florida, and Ohio and add Iowa. Nobody won those states and lost. We were supposed to lose 25 seats and we gained 16 in the House of Representatives.

‘If it wasn’t for me, right now the Senate would be 60-40 against,’ Trump argued during the event.

He claimed that Democrats would have 10 more seats than they currently have in the evenly split legislative chamber of Congress. ‘Because I made teleconference calls—they call them town hall calls—speaking to tens of thousands of people, for congressional candidates and senators,’ the former president said.

‘And we would be at 60-40 against instead of 50-50,’ Trump added, before attacking the GOP Senate minority leader. ‘And unfortunately Mitch McConnell, with what he was doing, hurt us very, very badly in Georgia. We lost those two seats. We should have never lost those two seats.’

Trump has repeatedly criticized and attacked McConnell, after the Kentucky Republican condemned his actions leading up to the January 6 riots targeting the U.S. Capitol.

Although McConnell did not join seven GOP senators in voting to convict Trump for inciting the violence, he refused to defend Trump and blamed him directly for the assault.

Dozens of election challenge lawsuits filed by Trump and his allies have all been dismissed in both state and federal courts. Even judges appointed by Trump and others have rejected the allegations. 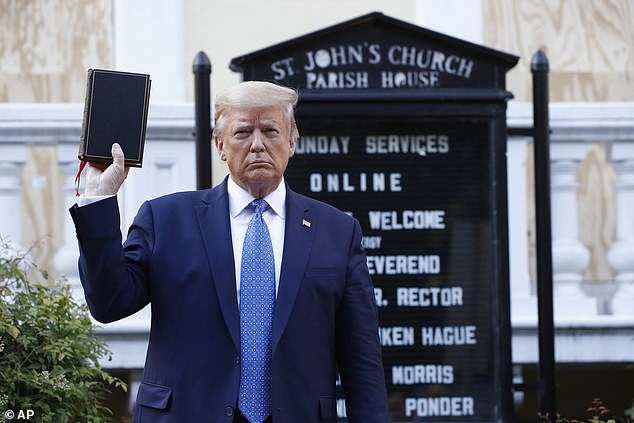 ‘Lafayette Square was not cleared for a photo op. That just came out and I want to thank the Inspector General for having the courage to come out with the truth,’ Trump said. Pictured, above, President Donald Trump holds a Bible as he visits outside St. John’s Church across Lafayette Park from the White House in Washington last June

Election audits and recounts in key battleground states, including in places where the election was overseen by Republicans, have all reaffirmed Biden’s win.

In the video message live-streamed during Lindell’s MAGA Frank Free Speech rally at the River’s Edge Apple River concert venue in New Richmond Trump proceeded to reel off a list of things insisting that he was ‘right about everything’.

Trump then proceeded to reel off a list of things that he was ‘right about everything’. 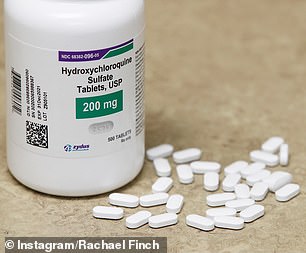 ‘We were right! Listen to this Hydroxychloroquine works,’ Trump touted on Saturday during remarks at a MAGA rally 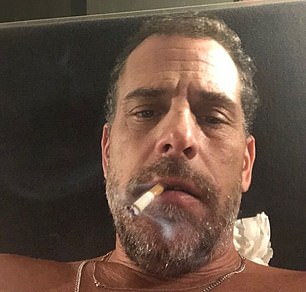 ‘The schools have to be reopened. We’ve been saying that for a year. Open up the schools. And our border security program were vitally important and unprecedentedly successful. All Biden had to do was to leave it alone. So we went from the most safest border in the history of our country to the worst and most dangerous. Drugs are flowing in at a level we’ve never seen before. There is human trafficking. Nobody has ever seen numbers like this,’ Trump stated.

‘I just saw a report where Sweden is doing very bad on crime. Germany is doing very bad on crime. These used to be the safest countries in Europe and now they’re becoming very unsafe. You know why? They’re letting in people into their country that are causing disruption. Well, we are letting people into our country at a level Sweden couldn’t even imagine. So people are just flowing across our borders. We built almost 500 miles of border wall and it would have been finished in just four weeks, and then Biden decided to stop it. 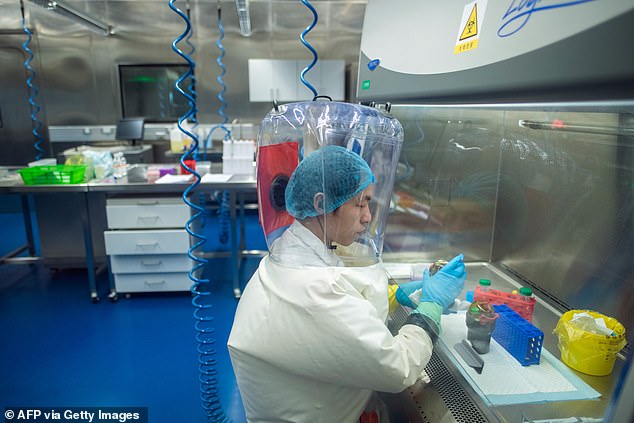 China continues to face increasing international scrutiny over its handling of the COVID-19 pandemic, with U.S. intelligence services investigating whether the novel coronavirus leaked from a lab in Wuhan, where the outbreak first emerged at the end of 2019. Pictured, a worker inside the Wuhan lab

On the coronavirus Trump demanded China pay reparations to the United States saying the figure of $10 trillion wouldn’t be enough.

It comes as China continues to face increasing international scrutiny over its handling of the COVID-19 pandemic, with U.S. intelligence services investigating whether the novel coronavirus leaked from a lab in Wuhan, where the outbreak first emerged at the end of 2019.

‘China and the China virus—they have to pay reparations. We’ve been hurt so badly in terms of death, human life,’ Trump said.

‘And in terms of monetarily, to a level that they have to pay us.And frankly, if they paid us $10 trillion that wouldn’t cover it. But they really have to pay the world because this started in the world—the entire world has been, not only disrupted, but it’s almost been destroyed and we’re doing well because we created such a great economic foundation.’ 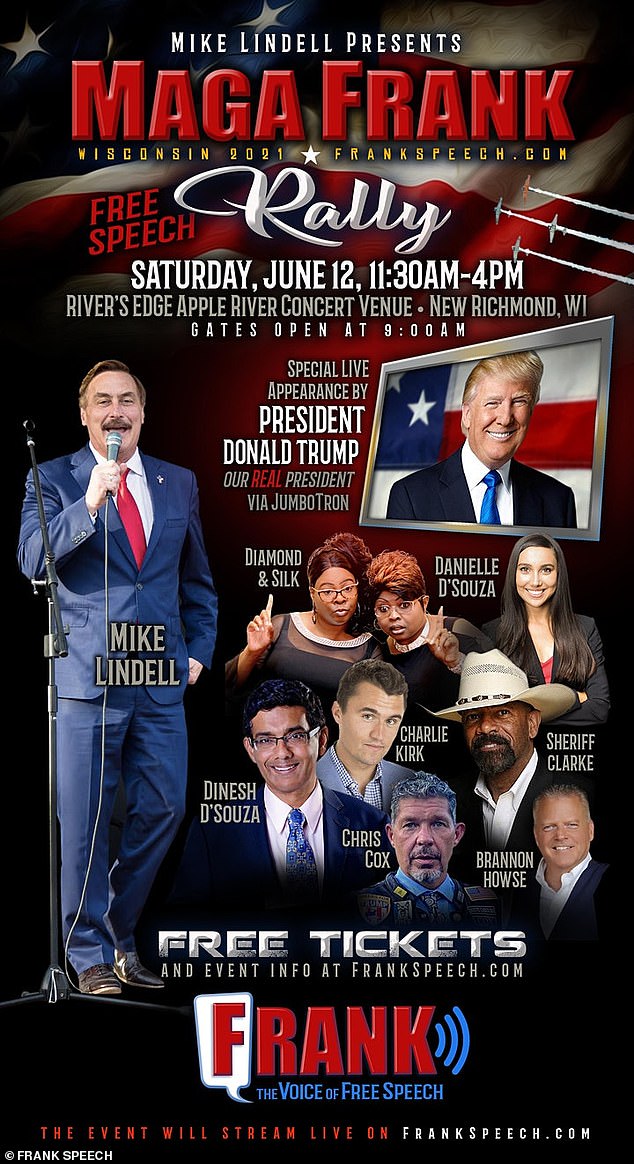 The Wisconsin rally was organized by conspiracy theorist MyPillow CEO Mike Lindell, a staunch supporter of the former president