President Trump says he does not need Congress to authorize a military strike on Iran.

When he was asked by The Hill if he had legal authority to bomb Iran without getting approval from Congress, the president said: ‘I do.’

‘But we’ve been keeping Congress abreast of what we’re doing … and I think it’s something they appreciate,’ the president told The Hill.

‘I do like keeping them abreast, but I don’t have to do it legally.

‘We were pretty close to maybe making a decision to strike.

‘Then I decided not to do it. Nobody went out, by the way.

‘I was going to make that decision by a certain time, and I decided not to do it because it wasn’t really proportional.’

Trump on Thursday aborted a military strike on Iran after the Islamic Republic shot down an American military drone near the Strait of Hormuz.

The president said on Friday he aborted the military strike to retaliate because it could have killed 150 people, and signaled he was open to talks with Tehran.

Tehran said the drone was shot down over its territory and Washington said it occurred in international airspace over the Strait of Hormuz.

Senate Minority Leader Chuck Schumer said that Democrats told Trump the same thing when they met with the president in the Situation Room of the White House on Thursday.

When asked about Pelosi’s comments, Trump said on Monday: ‘I disagree. Most people seem to disagree.’

‘They have ideas,’ Trump said of members of Congress.

‘They’re intelligent people. They’ll come up with some thoughts.

‘I actually learned a couple of things the other day when we had our meeting with Congress.’ 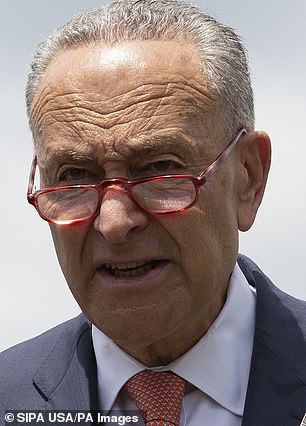 Republicans have been largely silent on whether Trump needs the okay from Congress – with the exception of House Rep. Justin Amash.

The congressman from Michigan tweeted in response to Trump’s comments about not needing Congressional approval: ‘Constitution: Wrong.’

Amash is also the only Republican member of Congress to side with a growing number of Democrats who say Trump should be impeached over the revelations contained in the Mueller report.

The report, written by Special Counsel Robert Mueller, describes actions by the president which some say constitute obstruction of justice.

Mueller was tasked with investigating alleged Russian meddling in the 2016 presidential election. Trump and the Russians have denied all wrongdoing.

Last month, rising tensions between the U.S. and Iran prompted some Democratic and Republican lawmakers to call for the repeal of a law that presidents have used for two decades to justify U.S. military action around the world.

Representative Barbara Lee, a Democrat, and Thomas Massie, a Republican, held a news conference with other members of the House of Representatives to call for the repeal of the 2001 Authorization for the Use of Military Force (AUMF), passed days after the Sept. 11 attacks on New York on Washington. 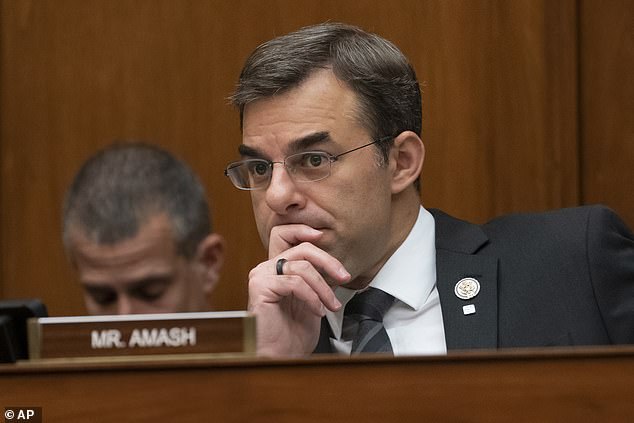 The congressman from Michigan tweeted in response to Trump’s comments about not needing Congressional approval: ‘Constitution: Wrong.’

A House subcommittee last month approved an amendment to a defense spending bill that would repeal the AUMF.

The lawmakers said that, after nearly 18 years, it was time for Congress to repeal and replace the law, stressing that it was too broad from the start and saying it definitely should not be used to justify war with Iran.

In 1973, Congress passed the War Powers Act, a federal law which required the president to obtain approval from legislators before declaring war.

The bill was vetoed by then-President Richard Nixon, but both the House and the Senate overrode the veto and the bill became law.

Earlier on Monday, Trump signed an executive order with new ‘hard-hitting’ sanctions on Iran directly targeted at Supreme Leader Ali Khamenei after what he called a ‘series of aggressive behaviors’ by the regime.

He said the ayatollah’s own finances would now be in U.S. crosshairs as he stepped up the rhetoric against Iran, after standing down U.S. airstrikes minutes before planes were due to take to the air on Thursday night.

‘We do not seek conflict with Iran or any other country,’ he added.

‘I think a lot of restraint has been shown by us – a lot of restraint – and that doesn’t mean we’re going to show it in the future. But, I felt that we want to give this a chance, give it a good chance, because I think Iran potentially has a phenomenal future.’ 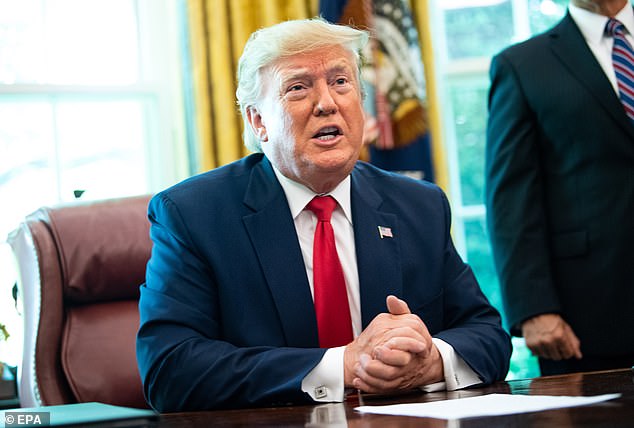 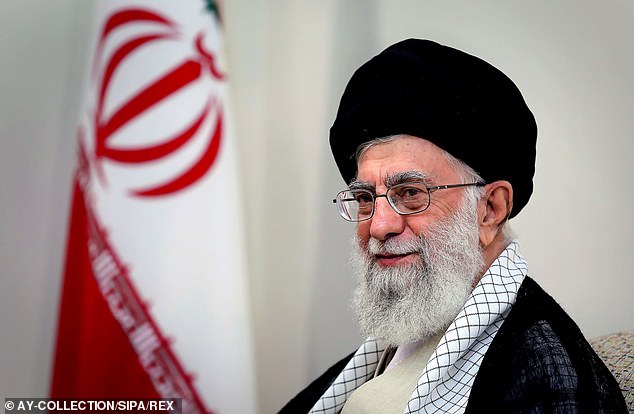 ‘We will continue to increase pressure on Tehran,’ Trump said.

And Trump on Monday called the actions by Iran ‘not good and not appropriate’ and specifically targeted Ali Khamenei, the Supreme Leader of Iran.

‘The Supreme Leader of Iran is one who ultimately is responsible for the hostile conduct of the regime. He is respected within his country. His office oversees the regime’s most brutal instruments.’

He said his message for Khamenei is to change the path he is on.

‘My only message is he has the potential to have a great country and quickly. Very quickly. I think they should do that than going along this destructive path. Destructive for everybody. It’s destructive for everybody. We can’t let them have a nuclear weapon. He says he doesn’t want nuclear weapons. It’s a great thing to say. A lot of things has been said over the years and it turns out not so. He said he does not want to have nuclear weapons. If that itself the case, we can do something very quickly,’ the president said.

‘Now along with our existing sanctions authority, we have additional sanctions to go after the supreme leaders’ office and lock up literally billions of dollars more of assets,’ he said in the White House briefing room after he left the Oval Office, where he had watched Trump sign the new sanctions order.

‘These sanctions are highly, highly-effective in locking up the Iranian economy,’ he said.

Mnuchin said the order was in the works before last week’s downing by Iran of a U.S. military surveillance drone and he also indicted it was in response to that as well as to previous Iranian actions in the Gulf, including attack on the oil tankers.

Mnuchin wouldn’t comment on whether military options are on the table.

The United States pulled out of a 2015 nuclear deal that world powers signed with Iran but has applied crushing sanctions on the Islamic nation.

Last year, the U.S. aimed to cut off all revenue from Iran’s oil export – the money that keeps the country running. The goal was regime change in Tehran.

Iranian oil exports have fallen from 1.5 million barrels per day in October 2018 to 750,000 in April, according to Bloomberg News.

Mnuchin said he would attend this week’s G20 meeting with the president in Japan to discuss the issue with U.S. allies.

‘I have not consulted on these specific sanctions. The answer is, in general, I have had many, many conversations with all our allies. I was in Japan ten days ago meeting with the finance ministers and discussed our sanctions program. I will be going to the G-20 with the president. Again, this will continue to be a topic of discussion,’ he said. 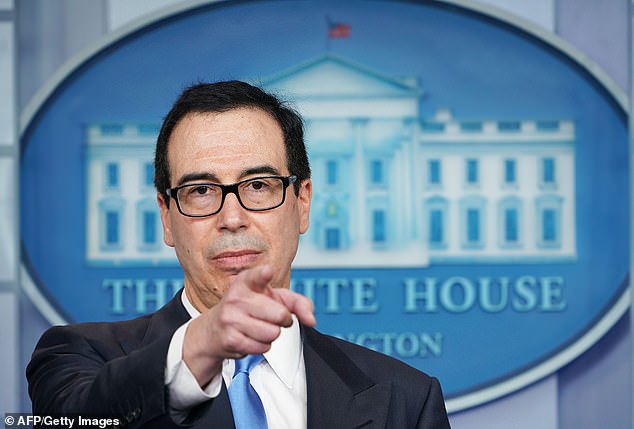 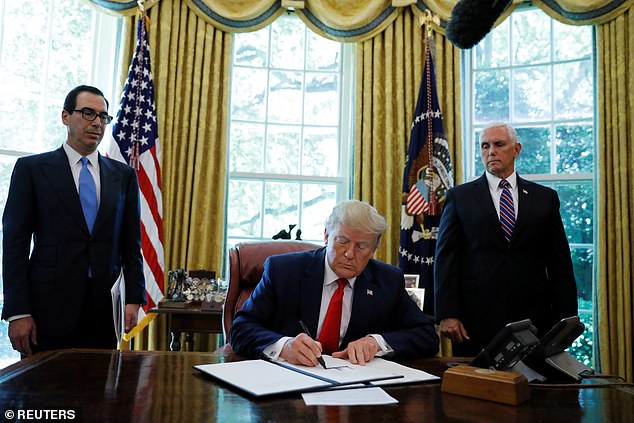 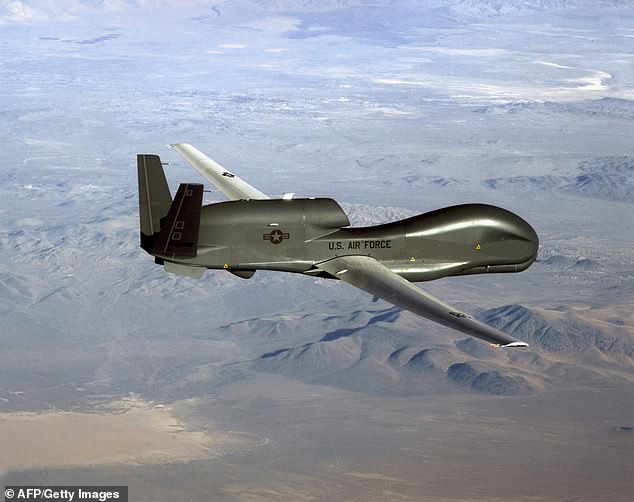 The president also warned Tehran it can never have a nuclear weapon.

‘We cannot ever let Iran have a nuclear weapon and it won’t happen and secondly, and very importantly, we don’t want money going out to sponsor terror. They are the number one sponsor of terror in the world. So I’ll sign this order right now,’ Trump said.

The downing of the drone prompted some administration officials – including National Security Adviser John Bolton and Secretary of State Mike Pomeo – to push for a missile attack in retaliation.

There were reports such an attack was in the works before Trump canceled it.

But the president said last week he had not given the final go ahead for an Iranian attack when he called off a strike on Thursday night.

He told NBC’s Chuck Todd the planes were still on the ground when he called the whole thing off.

‘Nothing is greenlighted until the very end, because things change,’ Trump said in an interview for NBC’s ‘Meet the Press.’ ‘We had something ready to go, subject to my approval.’ 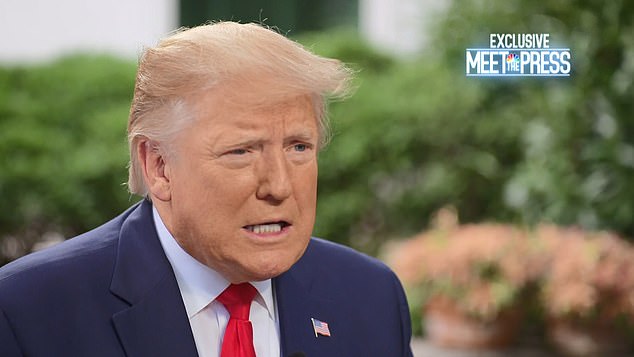 He said he asked how many people would be killed. ‘Approximately 150,’ the unidentified general told him.

‘And here we are sitting with 150 people dead people that would have taken place, probably within a half hour, after I said go ahead. And I didn’t like it. I didn’t think it was proportionate,’ he said.

Tehran had claimed earlier in that day last eek that it had ‘indisputable’ evidence the drone violated its airspace.

But the U.S. said the drone was shot down 21 miles off the Iranian coast, in the Strait of Hormuz.

Pentagon video footage showed a smoke trail from the $180 million surveillance aircraft following a missile strike on the drone it says was flying over international waters.

The drone shoot down came after U.S. Central Command released a video claiming to show Iran removing a mine from one of the oil tankers hit by an explosion in the Gulf of Yemen.

Washington accused Iran of causing the two blasts, which left one of the vessels burning in a fireball and sparked a fresh exchange of angry rhetoric in an already tense Middle East standoff. 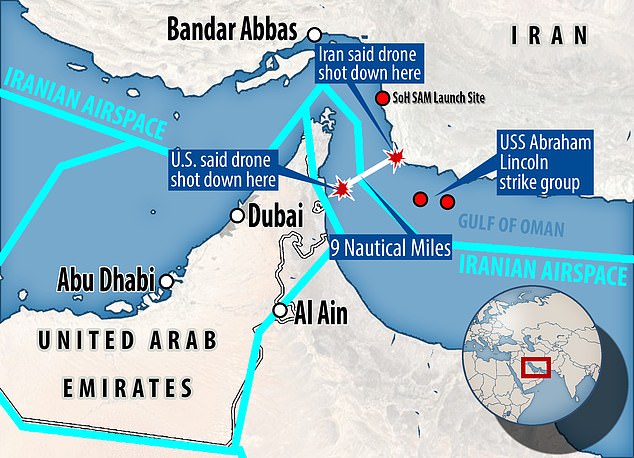 How the claims differ: Iran and the U.S. differ on where the drone was when it was targeted 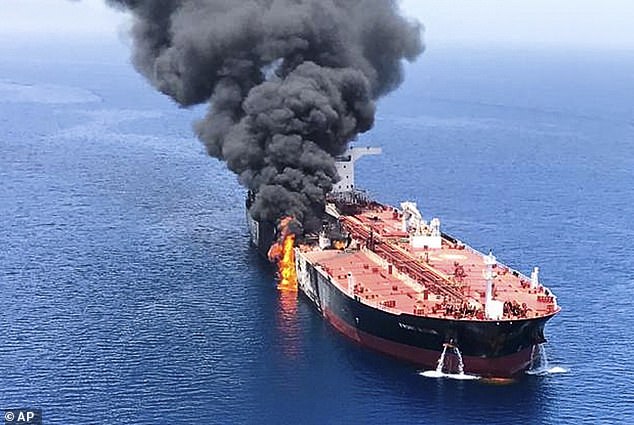 The footage published by the U.S. military purports to show Iranian vessels returning to the stricken Japanese-owned tanker Kokuta Courageous and removing an unexploded limpet mine.

Iran claimed it had sent a search and rescue team to bring the Kokuta’s crew to safety, but Washington D.C. argues their real intention was to hide Iranian involvement in the blasts.

Tehran dismissed the U.S. claims, calling them ‘baseless’ and accusing America of ‘sabotage diplomacy’ and ‘Iranophobia.’

The shipping firms affected are continuing their investigations amid claims that one of the crews saw a ‘flying object’ before an explosion on board.

The explosions, which forced 44 sailors on the Kokuta and the Norwegian-owned MT Front Altair to abandon ship, have also sparked fears over the world oil supply after four tankers were targeted in similar blasts last month.

Trump, at the time, accused Iran of attacking the oil tankers and warned Tehran that he doesn’t take the aggressive move lightly.

‘Iran did do it,’ Trump said on ‘Fox & Friends’ when during a phone interview with the morning cable news show.

He advised Iran’s mullahs that the U.S. could see evidence of the attack, citing grainy video footage released by the U.S. military that they claimed shows Iranian vessels retrieving an unexploded mine from one of the damaged ships.

‘You saw the boat, one to have mines didn’t explode and it has Iran written all over it. Successfully took the mine off the boat and that was exposed. They didn’t want the evidence left behind. They don’t know that we have things that we can detect in the dark that work very well. We have that. It was them that did it,’ Trump said.