Trump says he gave Melania A CARD for her birthday

Calling into Fox & Friends Thursday morning, President Trump said the date was special because it was his wife, Melania Trump’s, birthday.

That caused the inevitable question to be asked: what did you buy her as a birthday gift? 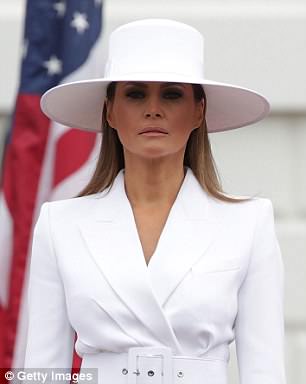 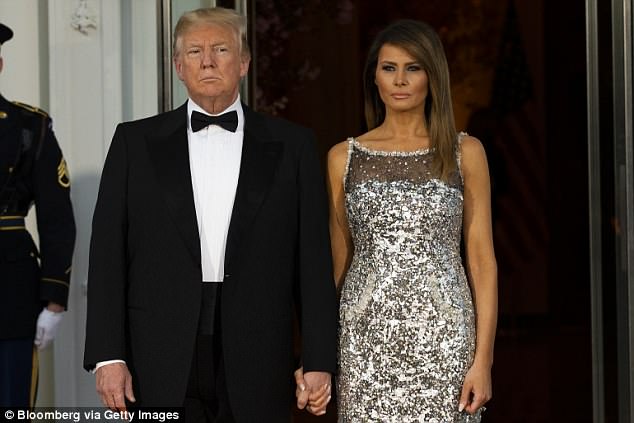 He then turned to the first lady’s biggest test so far – Tuesday night’s state dinner with France.

‘She did a fantastic job with France,’ the president gushed. ‘I tell you what, the people of France are just, were spellbound by what happened, with their great president who just left, Emmanuel. And he is a wonderful guy.’

Melania Trump took a hands on approach to the planning of the administration’s first state dinner, choosing to have her small team handle the event instead of hiring outside party planning help, which past first ladies have utilized.

The dinner was small, intimate, with guests sitting in the state dining room under candlelight.

At each of the place settings there was a menu, with the White House seal and the fleur-de-lis, which were also in gold.

Just outside the state dining room, the first lady went with a different theme, using some 1,200 cherry blossoms in giant black vases to greet the 120-some guests as they came in.

The only minor complaint was that one source told a reporter for the Advocate, a Louisiana newspaper, that the jambalaya was ‘just rice’ and didn’t include seafood, meat or tomatoes.

Still, Sen. Bill Cassidy, one of the few members of Congress to attend and a Louisiana Republican, called the meal ‘fantastic.’

‘We don’t have to have dinner with them to have conversation with them,’ she added.

On Wednesday, the president had tweeted praise at his wife.

‘FLOTUS did a spectacular job hosting the President of France Emmanuel Macron and his wife Brigitte,’ the president tweeted. ‘Every detail was done to perfection. The State Dining Room never looked more beautiful, and Washington is abuzz over what an incredible job Melania did.’