President Donald Trump took aim at familiar political targets and added a few fresh ones during a campaign-style rally in Michigan, an Upper Midwest state so crucial in sending him to the White House.

Trump has been urging voters to support Republicans for Congress as a way of advancing his agenda. In the Saturday night in Washington Township, he repeatedly cited to Sen. Debbie Stabenow of Michigan as one of the Democrats who needed to be voted out.

After saying Stabenow was standing in the way of protecting U.S. borders and had voted against tax cuts, Trump said: ‘And you people just keep putting her back again and again and again! It’s your fault!’

‘It’s your fault!’ President Donald Trump told fans at a Michigan rally on Saturday night that they’re to blame if the U.S. border remains porous and his tax cuts evaporate, because they have a senator from the Democratic Party 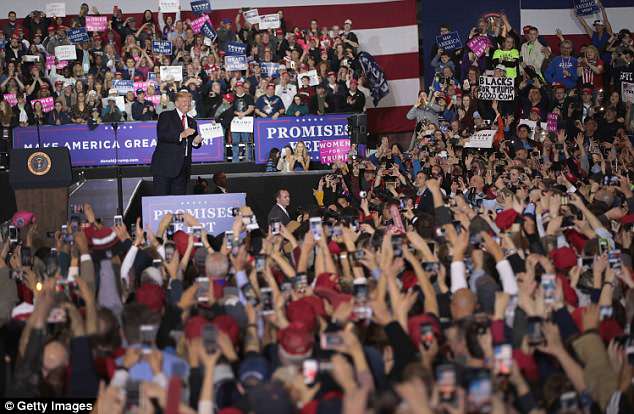 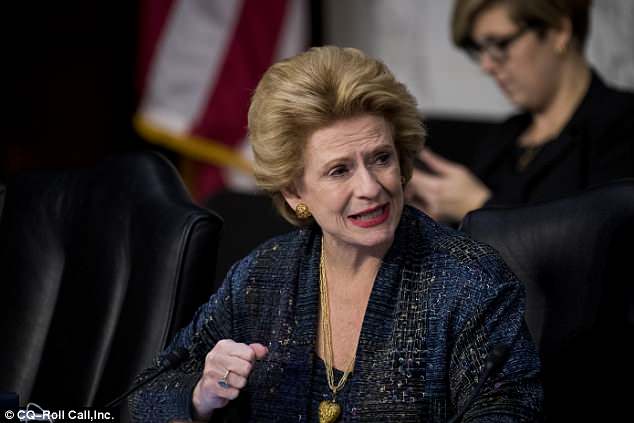 Earlier Saturday, Trump tweeted criticism of Democratic Sen. Jon Tester of Montana over his role in the failed nomination of White House doctor Ronny Jackson to run the Department of Veterans Affairs, calling for Tester to resign or at least not be re-elected this fall.

In Michigan, Trump railed against the allegations Tester aired against Jackson and suggested that he could take a similar tack against the senator.

‘I know things about Tester that I could say, too. And if I said them, he’d never be elected again,’ Trump said without elaborating.

As he has at similar events, Trump promoted top agenda items that energize conservatives: appointing conservative judges, building a wall on the U.S.-Mexico border, ending ‘sanctuary cities’ and protecting tax cuts approved by the Republican-led Congress. He also took credit for the warming relations between North and South Korea, telling his audience ‘we’ll see how it goes.’

‘Great evening last night,’ the president tweeted early Sunday. ‘The enthusiasm, knowledge and love in that room was unreal. To the many thousands of people who couldn’t get in, I cherish you. … and will be back!’

Trump chose a friendly venue for his rally, which not coincidentally came the same night as the annual White House Correspondents’ Dinner. He skipped the dinner last year.

‘While Washington, Michigan, was a big success, Washington, D.C., just didn’t work. Everyone is talking about the fact that the White House Correspondents Dinner was a very big, boring bust…the so-called comedian really ‘bombed,” Trump asserted on Twitter.

That barb was directed at Michelle Wolf, who provided the after-dinner entertainment for the White House press corps and their guests, and whose performance was surprisingly racy. After one crass joke drew groans from the audience, Wolf laughed and said, ‘Yeah, shoulda done more research before you got me to do this.’

Before the Michigan rally, Trump had said in a fundraising pitch that he had come up with something better than being stuck in a room ‘with a bunch of fake news liberals who hate me.’ He said he would rather spend the evening ‘with my favorite deplorables.’

During the 2016 campaign, Clinton drew laughs when she told supporters at a private fundraiser that half of Trump supporters could be lumped into a ‘basket of deplorables’ – denouncing them as ‘racist, sexist, homophobic, xenophobic, Islamophobic, you name it.’ 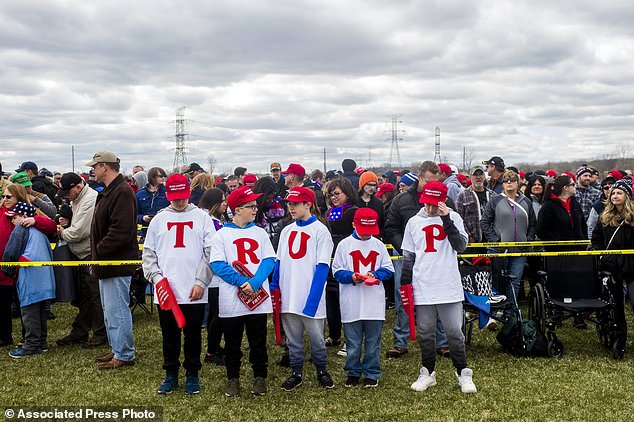 Michael Sakowski, from left, Matthew Sakowski, Dylan King, Evan Sakowski and Bryce King spell out the letters ‘TRUMP’ and each dons a ‘Make America Great Again’ cap, as they wait with other Trump supporters for last night’s rally in Washington Township, Michigan 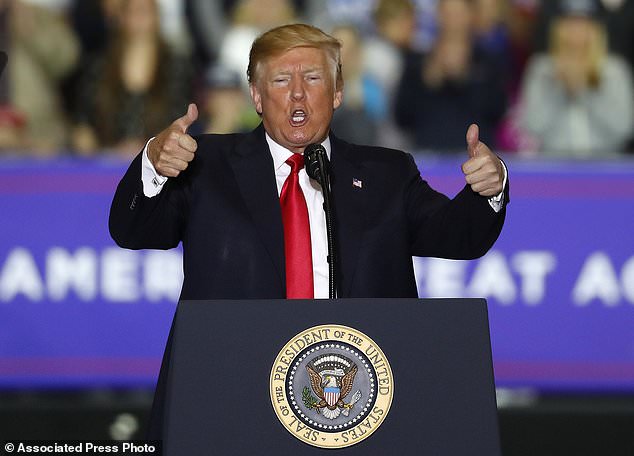 ‘A vote for a Democrat in November is a vote for open borders and crime … [and] much higher taxes,’ Trump claimed Saturday night

Clinton later did a partial rollback, said she had been ‘grossly generalistic’ and regretted saying the label fit ‘half’ of Trump’s supporters. But she didn’t back down from the general sentiment.

Trump soon had the video running in his campaign ads, and his supporters wore the ‘deplorable’ label as a badge of honor.

Trump, in his remarks at the rally, repeatedly weaved back into immigration and his support for a border wall. He accused Democrats of not wanting to secure the border and keep violent criminals out of the country.

‘Debbie Stabenow is one of the leaders for weak borders and letting people in. I don’t know how she gets away with it,’ Trump said. ‘A vote for a Democrat in November is a vote for open borders and crime. It’s very simple. It’s also a vote for much higher taxes.’