Trump says he will scrap military parade if its to pricey

President Trump is willing to give up his plans for a military parade down Pennsylvania Avenue on Veteran’s Day if it costs too much, he said on Saturday night.

‘We’ll see if we can do it at a reasonable cost. If we can’t, we won’t do it,’ Trump said during a phone interview with Fox News host Jeanine Pirro.

‘The generals would love to do it, I tell you, and so would I.’

Trump did not specify how much money exactly would be too much of a cost for the parade. White House budget director Mick Mulvaney has previously estimated the parade would cost between $10 and $30million.

‘I think it’s great for our country, being a cheerleader, and the spirit,’ Trump said, adding that he would also settle for a July 4th parade. 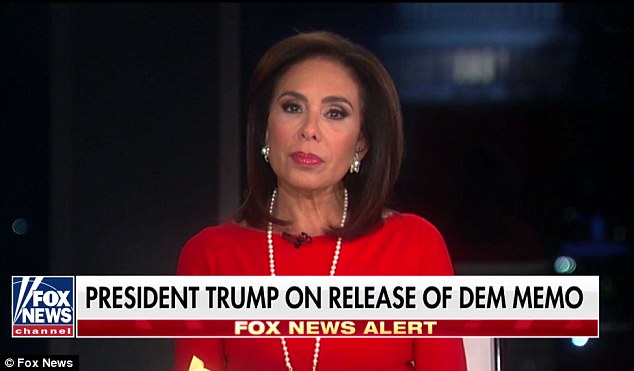 ‘The generals would love to do [the parade], I tell you, and so would I,’ Trump told Pirro during his 21th interview with the network since taking office

The president then discussed the defense policy bill that included a $700billion budget for the military, which he said was ‘depleted’ before he took office.

‘You know, our military was very depleted, it was going in the wrong direction, and I want to have by far the most powerful military in the world, I want it to be more powerful than we’ve ever had it.

‘And we need that today, I see what’s going on in the world better than anybody. The world is a tough place and we want to be stronger than we ever were,’ he told Pirro during his 21th interview with the network since taking office.

Trump added that although he would have loved to cut the budget, he had to give funding to the military that has been ‘so badly hurt for so many years, even beyond president Obama.’

‘I was forced to give democrats many billions of dollars for things that I would normally not have done.

‘They don’t care so much about the military, sadly, they don’t care about people pouring across the border and MS13, if anything they want to protect MS13,’ he said.

As Routers points out, however, the military funding may never happen, as the budget defies spending caps set in the 2011 Budget Control Act, and Congress has not offered a plan to provide the extra money to the Pentagon. 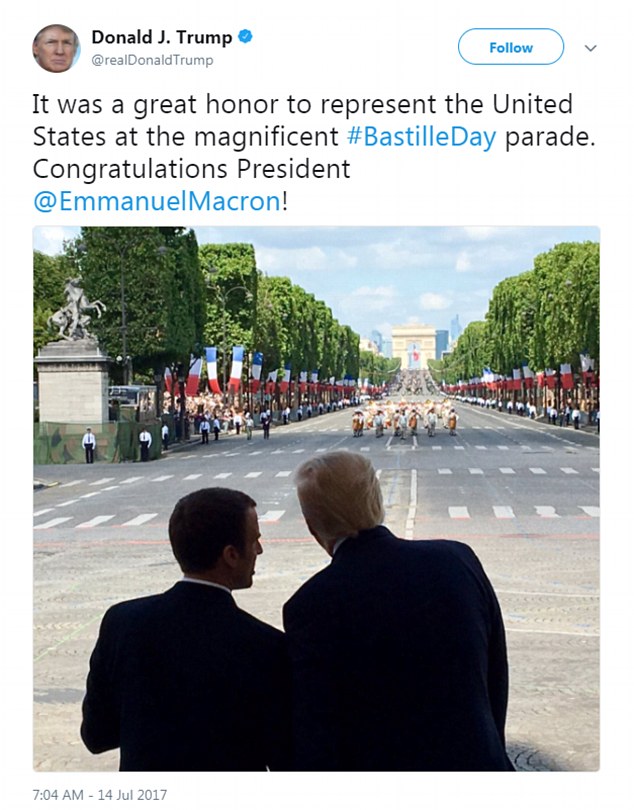 Trump and Macron watch Bastille Day procession on Champs-Élysées, Paris from which he got the idea to hold a US version 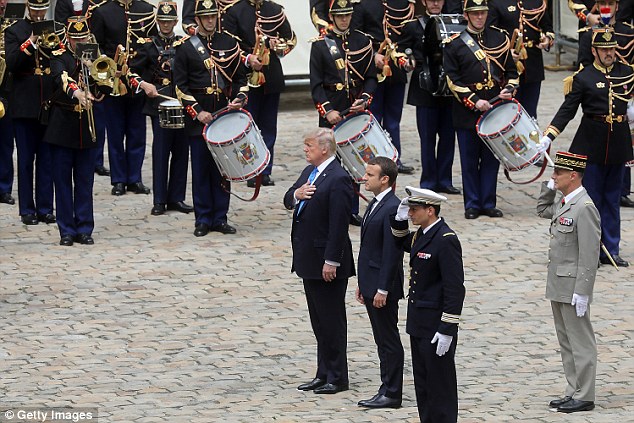 In the interview the president also doubled down on his tweets against Democrat Rep. Adam Schiff, calling him a ‘bad guy’ and saying the rebuttal memo released by democrats in response to a GOP one claiming the FBI abused its power when investigating the Trump campaign was ‘a nothing.’

He also once again denied any collusion between his campaign and Russia, and affirmed his commitment to defend the Second Amendment, again saying he believes in arming teachers.

Trump’s statements come just weeks after the Pentagon announced his procession request, and a day after a senior official confirmed that National Security Adviser H.R. McMaster ordered the military to set the date for Veterans Day on November 11.

The idea for the military parade came after Trump’s visit to France where alongside French president Emmanuel Macron he watched the Bastille Day procession that featured military tanks and ranks of soldiers march down Champs-Élysées. 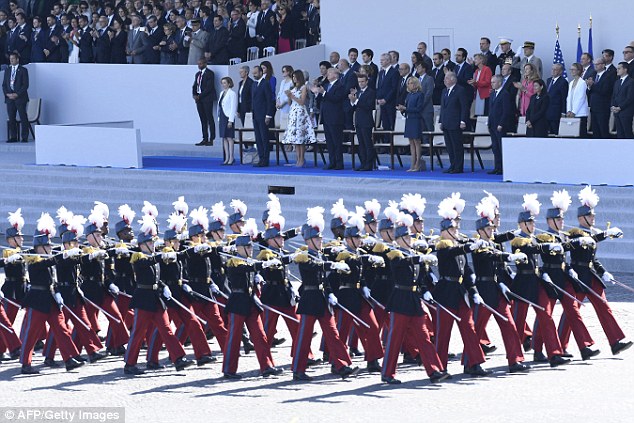 Inspired by the Bastille Day parade (above), Trump plans for a US spectacle of military might to mark the 100-year anniversary of the end of World War I 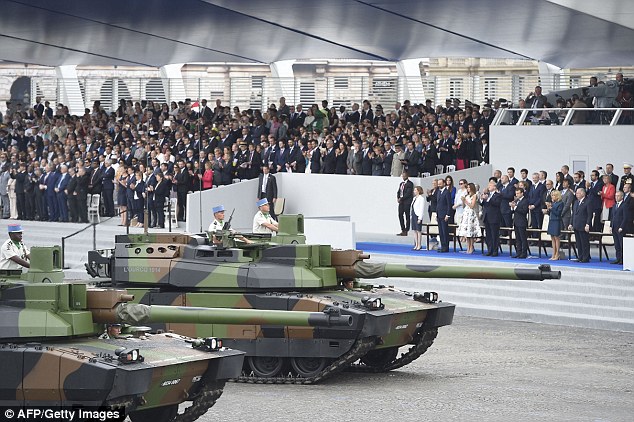 Tanks, soldiers, and air force service people all contributed to the military display in France

The Veterans Day date was confirmed by a senior US official according to Fox news.

The procession is set to run from the White House to Capitol Hill.

2018’s Veterans Day marks a timely choice for the parade as it will be the 100-year anniversary of the end of World War I.

When Macron visited the Capitol two months after the Bastille Day parade, Trump hinted at his plans to emulate the military ceremony.

‘It was a tremendous day, and to a large extent because of what I witnessed, we may do something like that on July 4th in Washington. We’re going to have to try to top it,’ he said.

Trump’s grand plans, however, do not sit well with several Democrat officials who have dismissed and mocked the parade as ‘a waste of money’.

California Rep. Jackie Speier said on CNN earlier this month, ‘I was stunned by it, to be quite honest. I mean, we have a Napoleon in the making here.’ 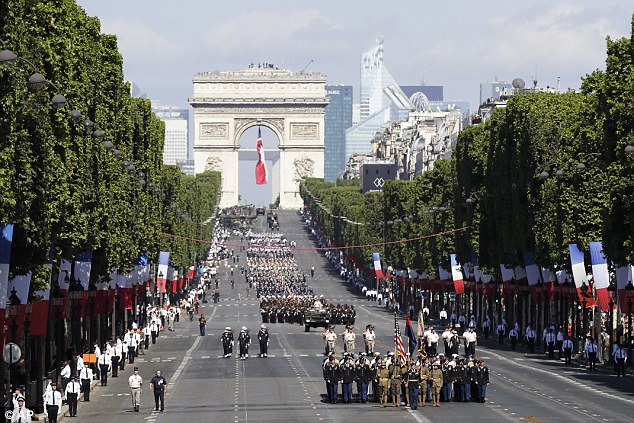 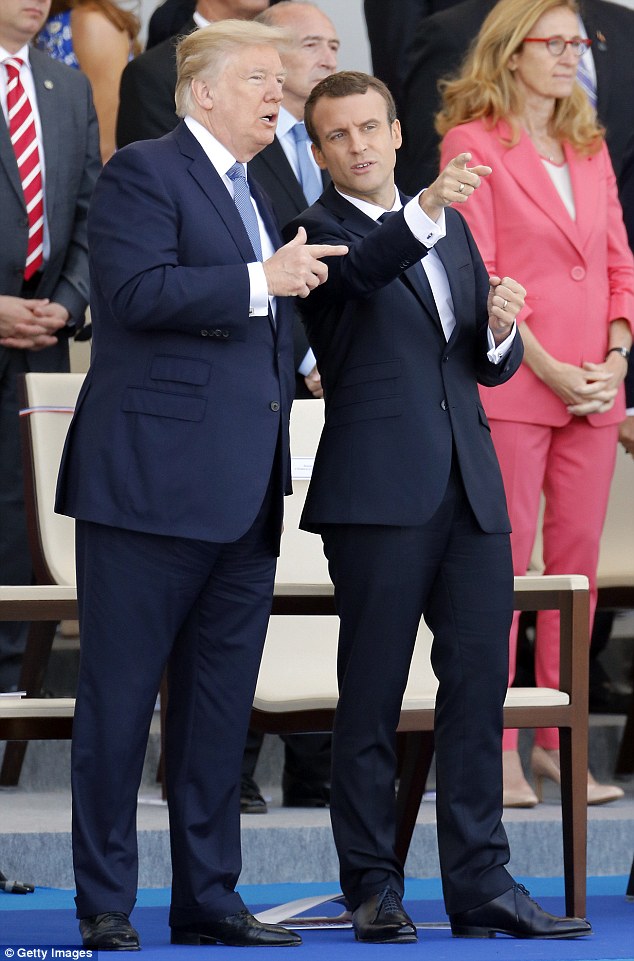 Trump and Macron chatted as they watched the parade on July 14, 2017 in Paris 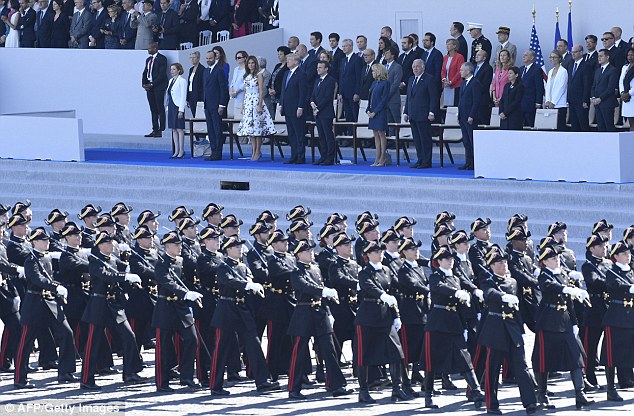 Melania, Trump and Macron watch the parade from an elevated platform

She added she thinks the spectacle will be ‘a waste of money.’

Minnestota Rep. Tim Walz, who is also the highest ranking former enlisted soldier serving in Congress, told on MSNBC the parade was ‘the stupidest thing I’ve ever heard’.

He added that those serving in the armed forces should not be used to display ‘whatever the president’s ego is trying to do. That is a terrible idea’.

California Rep. Ted Lieu took to Twitter to say that the Capitol would be better off investing the money elsewhere.

‘You know what would be more useful than asking the Pentagon to waste money on a big military parade?’ Lieu tweeted after the broadcast.

He also dubbed the parade ‘a waste of money for one man’s ego’ on CNN.

Other politicians were quick to note that Trump’s parade may follow the fashion of his Inaugural Parade, which had noticeably empty sections.

Washington Rep. Rick Larsen tweeted an image of the low turn out at his Inaugural parade saying: ‘There was already a #TrumpParade in DC. Not very well attended the first time, would be a waste of Pentagon time and resources the second time.’

The details of the procession are not yet clear.

It also remains unclear if Trump himself will participate in the spectacle as Macron did, riding in an open-top military vehicle, according to Politico. 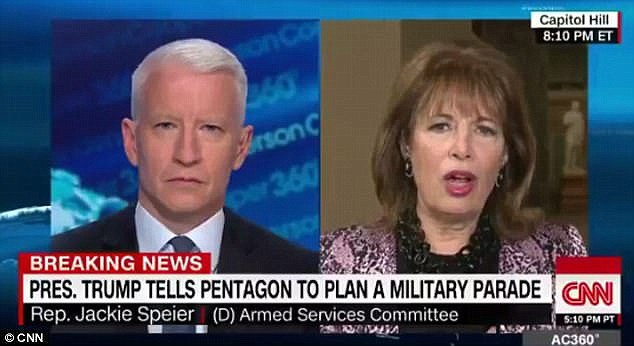 California Rep. Jackie Speier said she was ‘stunned’ by Trump’s massive military parade plans and said ‘I mean, we have a Napoleon in the making here’ 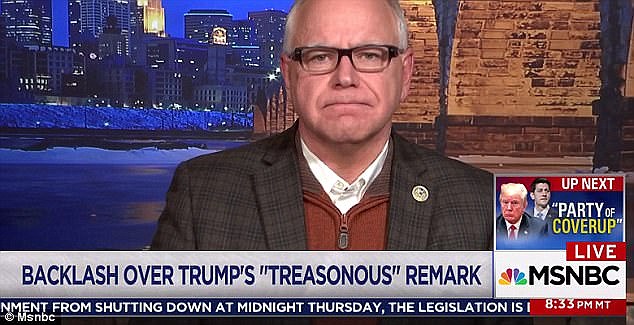 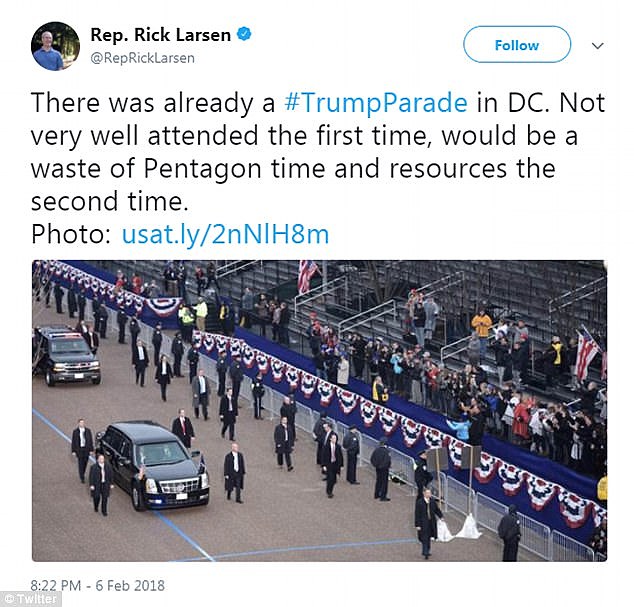 Washington Rep. Rick Larsen took to Twitter to remind Trump of the low turn out in some of the stands along his Inaugural Parade route