President Trump says he’ll travel to France in June, for the 75th anniversary of D-Day.

A World War II veteran asked Trump if he’d be attending the ceremony in Normandy over the summer, saying he hoped that the U.S. president would make the trip to Europe.

President Trump says he’ll travel to France in June, for the 75th anniversary of D-Day 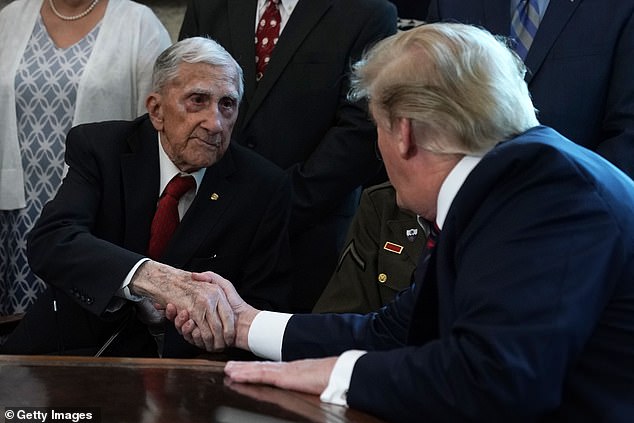 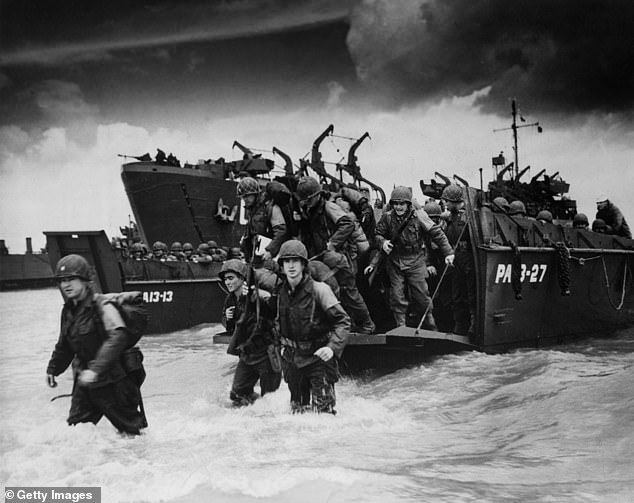 On June 6, 1944, reinforcements arrived at a landing barge at Normandy during the Allied Invasion of France on D-Day

Trump had been rumored to be attending associated events in England and France, but his participation had not been confirmed.

He did not say whether he would also go to the U.K., where he traveled last summer for a working meeting with the prime minister, or just France, which he has visited twice since taking office.

The Queen was expected to offer Trump a formal invitation to England to take part in D-Day activities. A reenactment of the D-Day landing of more than 156,000 American, Canadian and British troops begins in the U.K. and ends in Normandy, France.

Allied forces landed on the beaches of Normandy on June 6, 1944. This summer, a day before the anniversary, men and women will participate in a flight to Normandy, complete with a parachute landings in drop zones.

An online description of the event on France’s official tourism website says that 250 men and women will board an aircraft in the U.K. ‘exactly like 75 years before’ and ‘fly across the English Channel’ to ‘jump into the historic drop zones of Normandy.’

‘They will be wearing WWII style Allied uniforms and will jump military round parachutes. It will be an event which has no equal,’ an English translation of the website states. 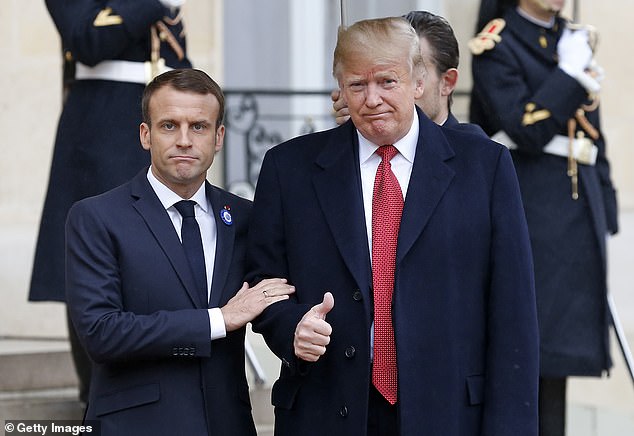 Trump has visited Paris twice, in 2017, for Bastille Day, and 2018, for Armistice Day. He’s seen here in Paris with French President Emmanuel Macron in November

Trump came to the U.K. for a two-day working visit in July of 2018, but it did not count as a state visit as it was not hosted by the Queen.

He did have a meeting with the 92-year-old monarch at Windsor castle, in addition to meeting at Blenheim Palace with embattled Prime Minister Theresa May. The two heads of government also held a press conference at Chequers, the PM’s country house.

His joined world leaders most recently in Paris in November, where he participated in an event commemorating the 100th anniversary of the conclusion of WWI.

American presidents typically travel to Normandy for major anniversaries of the landings.

Democrat Barack Obama participated in 70th anniversary events at Omaha Beach in Normandy in 2014 when he was president. Republican Ronald Reagan traveled to the same beach for the 40th anniversary of the invasion in 1984.

Trump invited WWII vets to the White House after inviting one of his guests to spend his birthday at building that doubles as the presidential office and residence on his birthday. 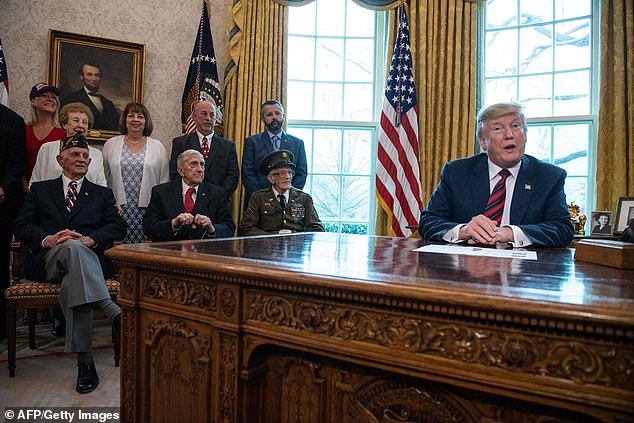 A World War II veteran asked Trump if he’d be attending the ceremony in Normandy over the summer, saying he hoped that the U.S. president would make the trip to Europe. ‘I’ll be there,’ he told vets in the Oval Office

He told veteran Allen Jones at a Veterans of Foreign Wars convention last summer that he could come to the White House this year on April 11th, and the White House noted Thursday that Trump had kept his promise.

Teasing the veterans, he told them, ‘I want to be like all of you someday.’

‘I’m a big believer in having good genes,’ the president joked.

Trump, who has made increased military funding a priority, said the war they fought in was a ‘great victory’ for the U.S., which has been caught up in conflicts he’s seeking to end in Afghanistan and Iraq for decades.

‘We knew how to win wars,’ he told the veterans of the Greatest Generation’s contribution.