President Donald Trump on Sunday claimed North Korea has agreed to ‘denuclearization’ before his potential meeting with Kim Jong Un. But that’s not the case.

North Korea said Friday it would suspend nuclear tests and intercontinental ballistic missile launches ahead of summits with the U.S. and South Korea.

Kim also said a nuclear test site would be closed and ‘dismantled’ now that the country has learned how to make nuclear weapons and mount warheads on ballistic rockets.

But the North has stopped short of saying it has any intention of abandoning its nuclear arsenal, with Kim making clear that nukes remain a ‘treasured sword.’

Trump nonetheless tweeted Sunday that the North has ‘agreed to denuclearization (so great for World), site closure, & no more testing!’

He also used the tweet to hammer ‘Sleepy Eyes Chuck Todd of Fake News NBC’ for suggesting that the U.S. had ‘given up so much in our negotiations with North Korea, and they have given up nothing.’

President Trump (left) suggested in a tweet Sunday that North Korean Leader Kim Jong Un (right) had agreed to ‘denuclearization,’ which he hasn’t President Trump used Twitter to troll Meet the Press host Chuck Todd, though in that same statement made a blunder by saying that North Korea had agreed to ‘denuclearization’

Later Sunday afternoon, President Trump tweeted about North Korea again, this time taking on the talking heads on television for suggesting the deal he should make to get the regime to give up their nuclear weapons program

‘We are a long way from conclusion on North Korea, maybe things will work out, and maybe they won’t – only time will tell….But the work I am doing now should have been done a long time ago!’ Trump also said.

In a later tweet Sunday, Trump tweeted, ”Funny how all of the Pundits that couldn’t come close to making a deal on North Korea are now all over the place telling me how to make a deal!’

When asked additional questions about North Korea by reporters as he was leaving Florida for Washington, D.C., Trump flashed a thumbs up and said ‘very good.’

Denuclearization would be very good, but that’s not what the North Koreans agreed to, they instead indicated they were committed to the concept.

South Korea, which is set to meet with North Korea later this week, has said Kim has expressed genuine interest in dealing away his nuclear weapons.

But the North for decades has been pushing a concept of ‘denuclearization’ that bears no resemblance to the American definition, vowing to pursue nuclear development unless Washington removes its troops from the Korean Peninsula and the nuclear umbrella defending South Korea and Japan.

South Korea’s president has said Kim isn’t asking for the withdrawal of U.S. troops from the Korean Peninsula as a condition for abandoning his nuclear weapons. If true, that would seem to remove a major sticking point to a potential disarmament deal.

But that still doesn’t address a North Korean arsenal that now includes purported thermonuclear warheads and developmental ICBMs developed during a decadeslong cycle of crises, stalemates and broken promises.

Trump agreed to meet with Kim after an invitation was delivered by a South Korean delegation that had just returned from Pyongyang. 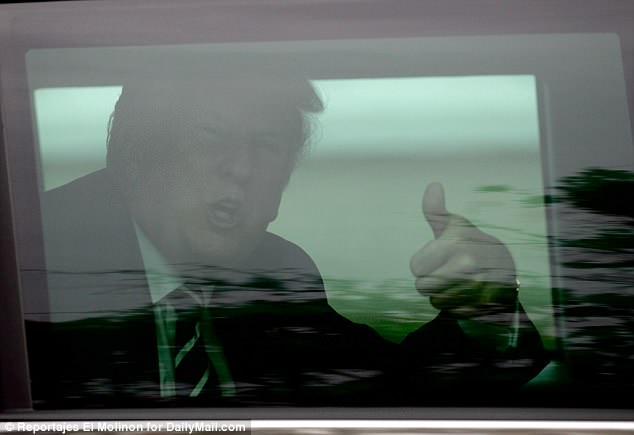 President Trump is seen giving a thumbs up from his motorcade on the way to the airport from the ‘Winter White House,’ Mar-a-Lago 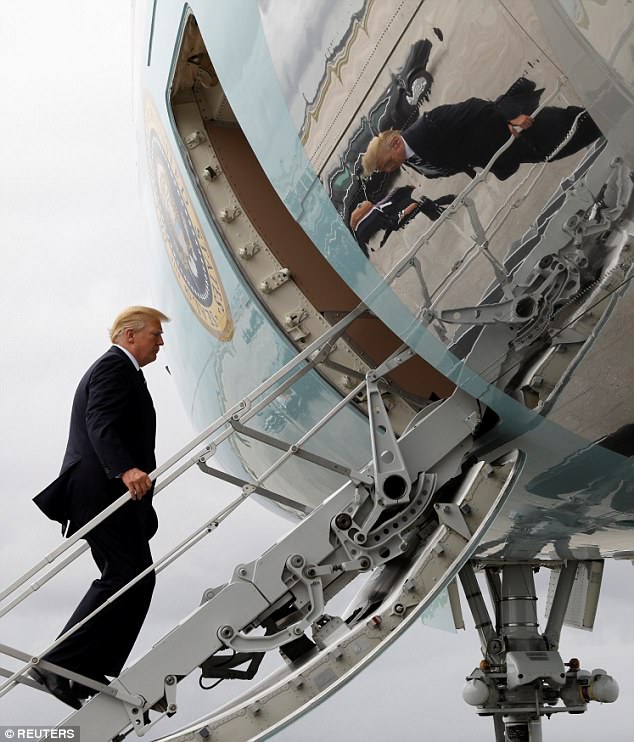 President Trump is seen boarding Air Force One after  sending out a flurry of tweets on Sunday, some of which were on North Korea

A place and date have yet to be set, but Trump’s pick to be the next secretary of state, CIA Director Mike Pompeo, traveled to North Korea on Easter weekend to lay the groundwork for the meeting.

Trump has called the talks a success, but it’s unclear exactly what was agreed to, if anything, as a condition for the leader-to-leader talks.

‘Look, this is a great public relations effort by Kim Jong-un. And I think people recognize that,’ Sen. Bob Corker, a Republican from Tennessee, said Sunday on CNN’s ‘State of the Union.’ But asked whether be believed the North would denuclearize, Corker offered caution.

‘Well, I don’t think he said anything about denuclearizing on the front end necessarily,’ he said.

He added on ABC’s ‘This Week’ that it’s unrealistic to think that ‘somebody’s going to go in and charm’ Kim out of keeping his nuclear weapons.

‘Is it realistic that he’s just willy-nilly going to do that? Absolutely not,’ Corker said. ‘But, you know, progress can be made, freezing the program, who knows what he’s – what his ambitions are as it relates to South Korea.’

Sen. Tom Cotton, R-Arkansas, was equally as skeptical on CBS’ ‘Face the Nation,’ arguing that North Korea’s recent statements are easily reversible and that no announcement has been made about short- or medium-range ballistic missiles that threaten South Korea and Japan.

‘Well, I think this announcement on Friday is better than continued testing, but it’s not much better than that,’ he said. ‘But I do think they show that the president has put Kim Jong Un on the wrong foot for the first time.’

Asked what denuclearization means to both sides, White House Legislative Director Marc Short said on NBC’s ‘Meet the Press’ that there needs to be a sit-down meeting to make sure everyone’s on the same page.

‘But I think from our perspective, it means full denuclearization,’ he said. ‘No longer having nuclear weapons that can be used in warfare against any of our allies.’

Still, Democratic Sen. Dianne Feinstein, D-California, told CBS that if the president goes through with the meeting, it’s ‘very important’ that it ‘goes well and that there is an ability to put together some terms of an agreement that might exist.’

‘The question,’ she said, ‘is whether it lasts or not. And of course the reputation of the North Koreans has been that they don’t necessarily keep their agreements.’