Trump says thousands of U.S. troops will move from Germany to Poland

Donald Trump says thousands of U.S. troops will move from Germany to Poland as he attacks Angela Merkel’s government for ‘not paying’ for NATO

President Trump said Wednesday at a press conference with Polish President Andrzej Duda that he was open to sending U.S. troops stationed in Germany to Poland.

Trump wants to take thousands of U.S. forces out of Germany because he says the United States bears too much of a financial burden for the deployment and criticizes the government in Berlin for buying Russian energy.

President Trump said Wednesday that thousands of U.S. troops will be moved out of Germany and said some could be headed to Poland 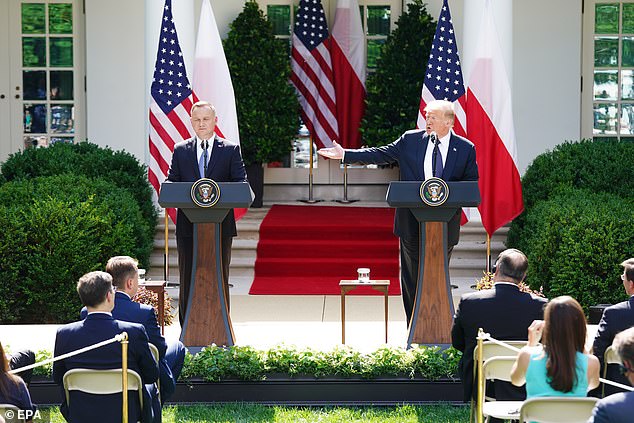 President Trump (right) was making a joint appearance with Polish President Andrzej Duda (left) Wednesday afternoon, in advance of the Polish election where Duda is on the ballot 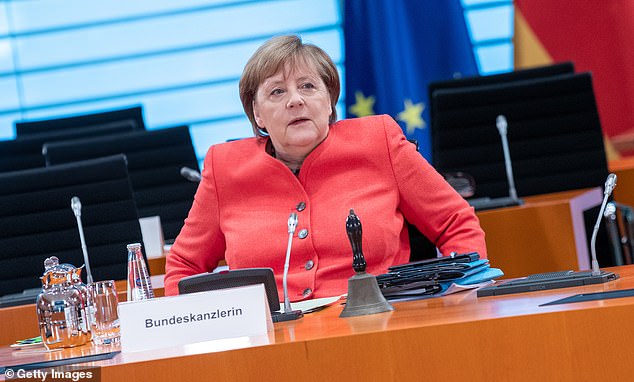 President Trump lashed out at Angela Merkel’s (pictured) Germany government for buying Russian energy while not paying enough into NATO. Trump used this as his explanation for why he wanted to remove U.S. troops from Germany

‘Germany is paying a very small fraction of what they’re supposed to be paying,’ Trump said, suggesting Berlin should be paying nearly double than what they do now into NATO. ‘That’s a tremendous delinquency,’ he said.

A defense agreement would send more U.S. troops to Poland, bolstering defense cooperation between the two NATO allies and acting as a further counterweight against Russian aggression.

‘I think it sends a strong message to Russia,’ Trump said.

Washington objects to the Russia’s Nord Stream 2 pipeline, which would double the amount of gas piped directly from Russia to Germany and reduce the amount piped in Ukraine.

The U.S. Army already has an area support group in the region that can be tailored to increase the number of U.S. soldiers in Poland.

According to Polish media reports, the United States could offer 2,000 soldiers to Poland, 1,000 more than initially agreed in June 2019. Those additional troops would include the U.S. Army V Corps from Kentucky and F-16s from Germany.

Another official with knowledge of the talks told Reuters that moving the V Corps to Poland was under discussion and that Poland could get more than the 1,000 troops agreed to last year, but would not say if 2,000 would be sent.

Trump also told the news conference that the United States and Poland were discussing a project to construct a nuclear-powered plant in Poland.

Duda was the first foreign leader to visit Trump since the coronavirus pandemic led to global lockdowns, and the two leaders said they looked forward to signing the defense cooperation agreement.

Critics have accused Duda and Trump of calling the visit just before the Polish election in order to improve the right-leaning Duda´s chances of winning, as his lead in opinion polls has dropped in recent weeks.

Duda’s campaign has focused on rallying his conservative base with attacks on what he calls lesbian, gay, bisexual and transgender ‘ideology,’ while promising to protect popular social benefit programs for families and pensioners that have transformed life for many poorer Poles.

The nationalist Polish leader has emerged as one of Trump’s preferred foreign partners.

The two have met one-on-one at least five times.

The two leaders spoke after meeting in the Oval Office.

Duda said it was an honor to discuss next steps in relations at the White House.

‘Today we are entering another stage, namely there is a possibility of further increase in American troops in our country,’ he said.