The president was referencing an article about how the far-left squad member could launch a primary challenge in 2022, tweeting: ‘Actually, that would be a big improvement – and she would win!’

Ocasio-Cortez, 30, is being put forward by the socialist wing of the party to take up Bernie Sanders’ mantle and lead a charge against Senate Minority Leader Schumer.

Sunday’s Washington Times article had referenced a recent tweet by a senior Sanders presidential campaign staffer which said AOC was an obvious pick.

David Sirota wrote: ‘Just going to say something out loud that should be obvious: The fastest way to speed up the process of changing the corrupt, do-nothing, status-quo-protecting culture of the national Democratic Party is for @AOC to defeat @ChuckSchumer in a Democratic primary in 2022.’

The Times’ article said that the sacking of Rep. Joe Crowley and the possibility that Rep. Eliot Engel might be thrown from the New York Democratic primary this week could clear the way for AOC. 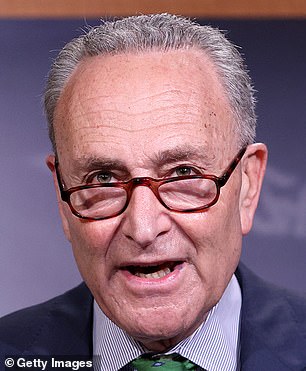 Trump’s praise for AOC comes just a few days after his rally in Tulsa, during which he told the diminished crowd: ‘She’s (Ocasio-Cortez) got no sense, no credentials… a little charisma, not much.’

AOC, a frequent social media sparring partner of the president’s, tweeted in response: ‘Ah yes – in fact, I’m so uncharismatic and untalented that the President of the United States has dedicated time at multiple rallies over two years to talk about me, a first term member of Congress [hair flick emoji].’

The youngest woman ever elected to Congress also ripped into the president’s attendance figures at the 19,000 BOK Center on Saturday night after 6,200 showed up.

‘Actually you just got ROCKED by teens on TikTok who flooded the Trump campaign w/ fake ticket reservations & tricked you into believing a million people wanted your white supremacist open mic enough to pack an arena during COVID,’ she tweeted on Saturday.

‘KPop allies, we see and appreciate your contributions in the fight for justice too,’ AOC added. 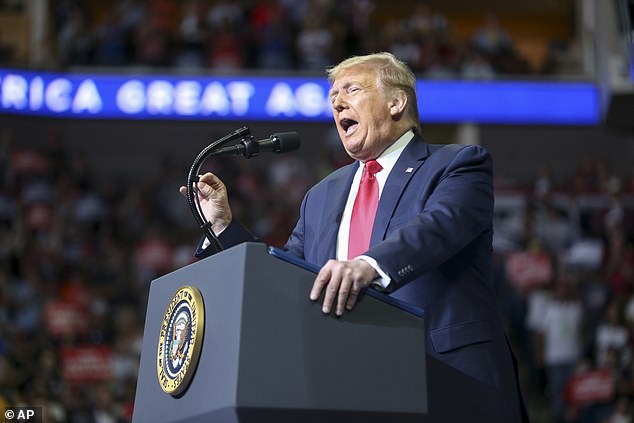 President Donald Trump speaks during his campaign rally at BOK Center in Tulsa, Oklahoma on Saturday

TikTok users and fans of Korean pop music have taken credit for inflating attendance expectations at a less-than-full arena in Oklahoma, Trump’s first rally in months.

CNN had reported Tuesday that a TikTok video posted by Mary Jo Laupp, who uses the hashtag #TikTokGrandma, was helping lead the charge. The video now has more than 700,000 likes.

Two K-pop fans who spoke to Reuters in Skype and phone interviews on Sunday said they had each registered for two spots, not using their real names and numbers.