The TCF Center in downtown Detroit boarded up its windows and shuttered its doors after hundreds of poll watchers descended on the building while ballots were being tallied.

Angry Trump fans banged on the windows of the absentee ballot counting center and shouted ‘stop the count’ as anxious security guards refused any more poll watchers entry to the counting room.

Democratic counterprotesters banners also showed up waving ‘count every vote’ banners and insisting every vote in the state be tallied.

Hundreds of challengers had shown up at the center in response to the president’s claims earlier Wednesday that the GOP should have ‘access’ to counting locations.

Democratic poll watchers also showed up as both sides eyed Michigan as one of the states where the White House may well be won or lost.

The scene grew increasingly heated and authorities halted any more poll watchers entering the counting center saying maximum capacity had been reached as Biden inched ahead in the afternoon with a 0.7 percent lead with 99 percent of votes tallied.

Trump’s campaign filed a lawsuit to halt the counting of ballots in Michigan until they received ‘meaningful access’ to counting locations.

Soon after, the state was called in favor of Biden, marking a key win for the Democrat. 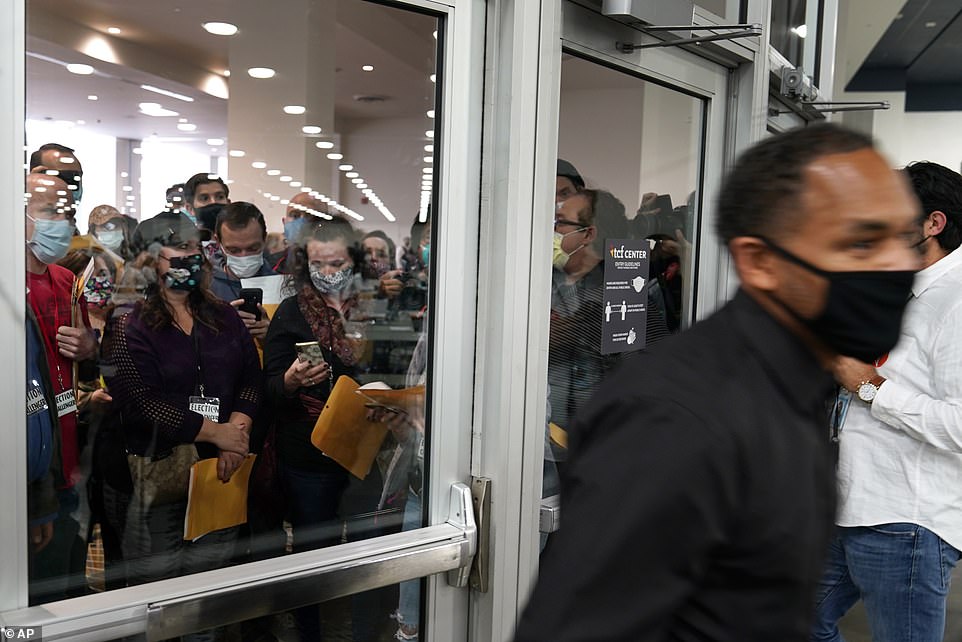 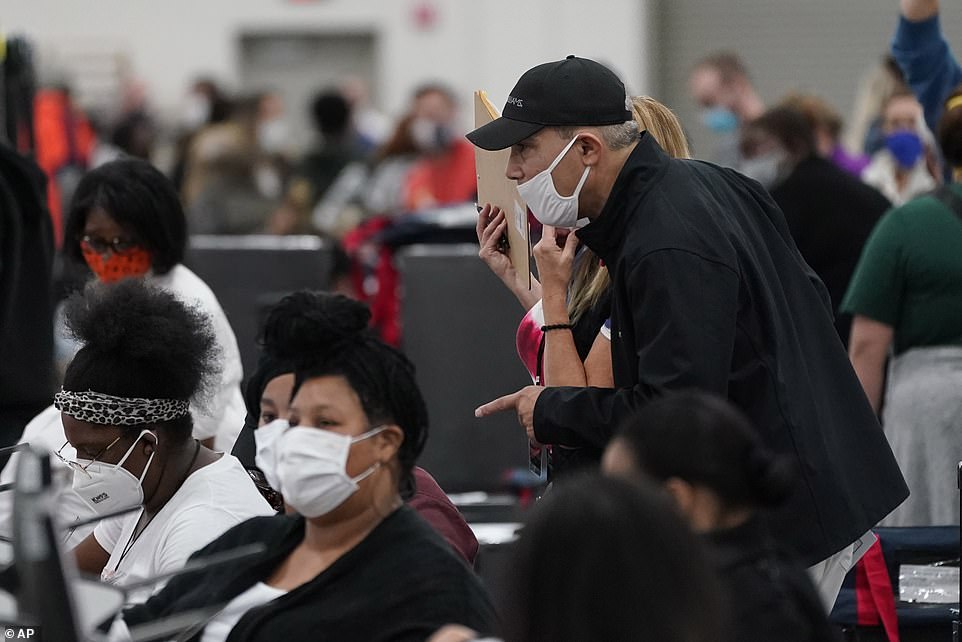 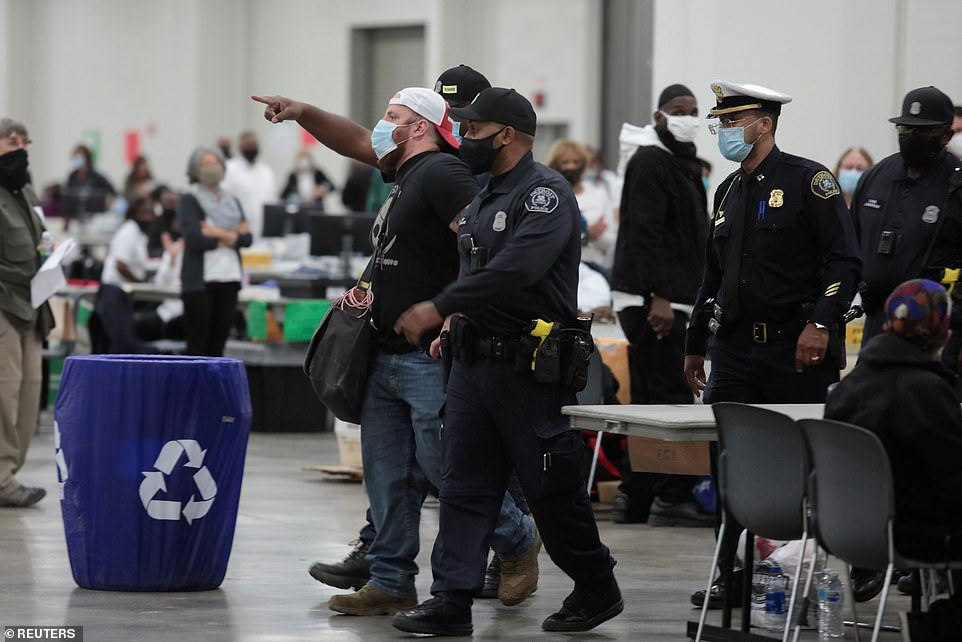 Detroit police escort a poll challenger out after he refused to leave, due to room capacity, at the TCF Center

Election officials shuttered the doors Wednesday afternoon to anyone else seeking to monitor the ballot counting process as volunteers were counting the final tallies with dozens of voters peering over their shoulders.

More than 100 demonstrators had flocked to the center as Biden took the lead Wednesday afternoon joining the more than 200 already on the scene.

‘We have exceeded the amount of challengers,’ an election worker told more than two dozen people who showed up at 1 p.m. to monitor the process, reported Detroit Free Press.

‘We are not allowing any more challengers in at this time.’

At one point, Detroit police escorted a poll challenger out of the center after he refused to leave due to room capacity.

Footage on social media also showed another fraught confrontation between police and a challenger.

Poll watchers had calmly checked in earlier in the day near the entrance to the convention center’s hall and strolled among the tables where ballot processing was taking place.

But the civility later subsided when more people arrived and were told the room was at capacity.

Both Republicans and Democrats are allowed 134 challenges each to monitor the ballot counting process.

It is not clear how many challengers are currently present on each side.

Republican challenger Timothy Griffin, an attorney from Virginia, told the Free Press he had been at the TCF since Tuesday night because the voting system was ‘not fair’.

‘This whole thing is under suspicion,’ he said. ‘It’s not equal. It’s just not fair.’

On the other side, Democratic challenger Liz Linkewitz from Harrison Township said she was there to help ensure the rights of American people to vote was upheld.

‘I just want to make sure that all Michigan votes are counted,’ she said. ‘This election is, as Joe Biden says, for the soul of our country.’

Outside the counting room, demonstrators carried ‘Count every vote’ banners and marched along Woodward Avenue.

Representative Rashida Talib – a Democrat and the first Muslim woman to ever serve in the Michigan Legislature – joined Democrats on the march calling for all votes to be counted in the state. 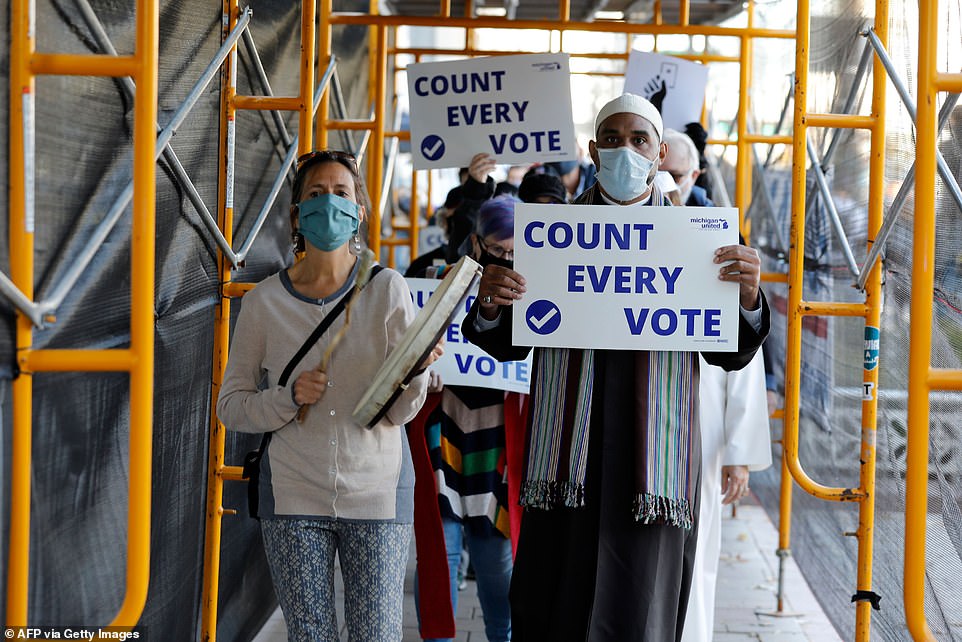 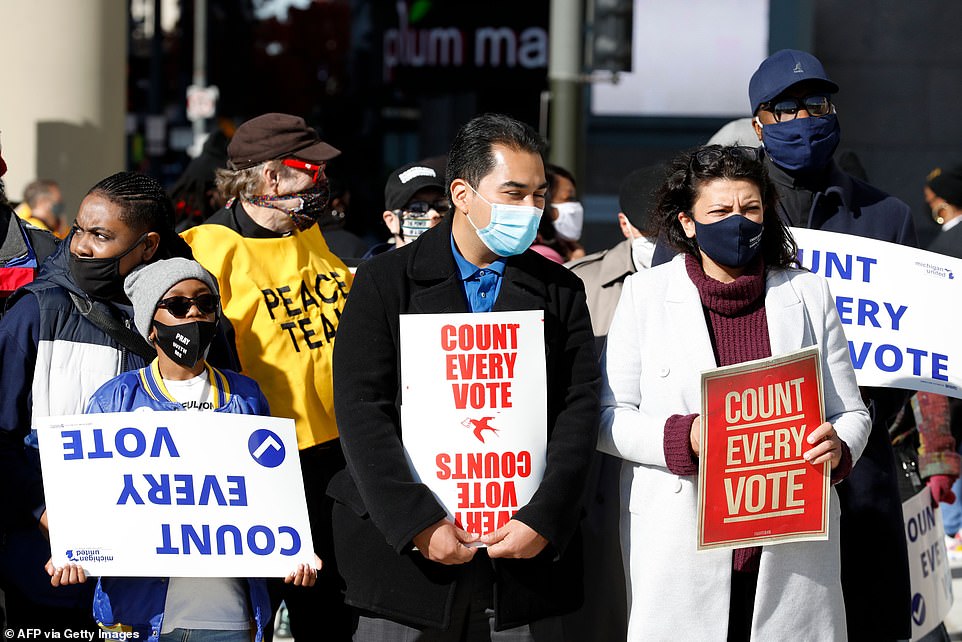 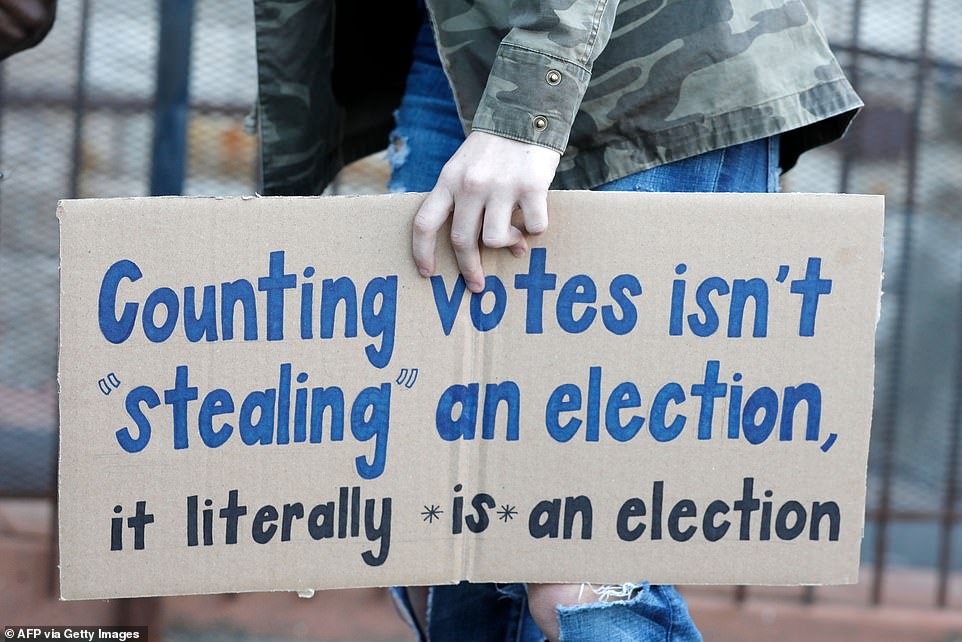 A protester who wants every vote counted from the 2020 presidential election, carries a sign as they march down Woodward Avenue on November 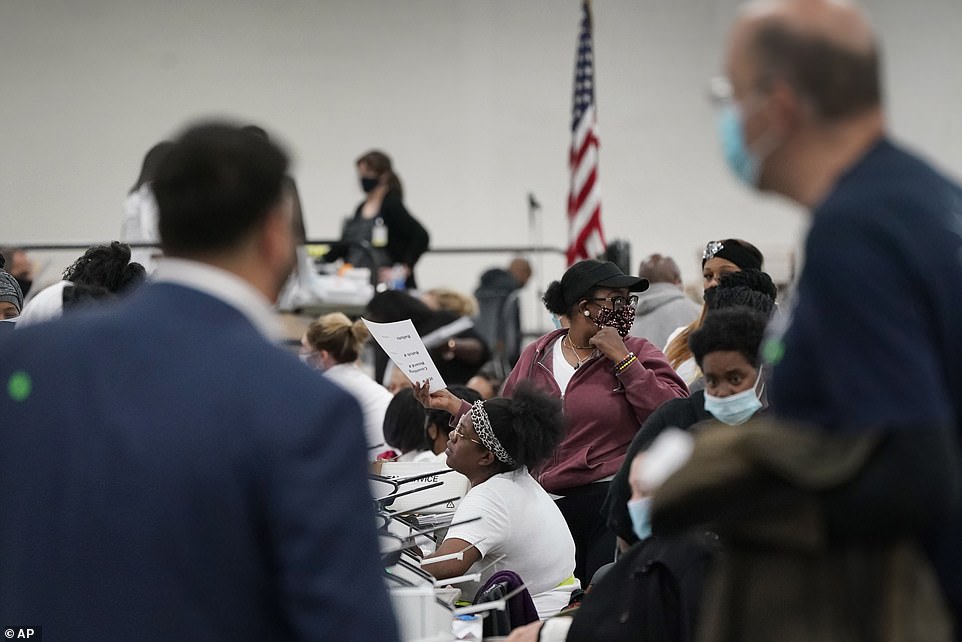 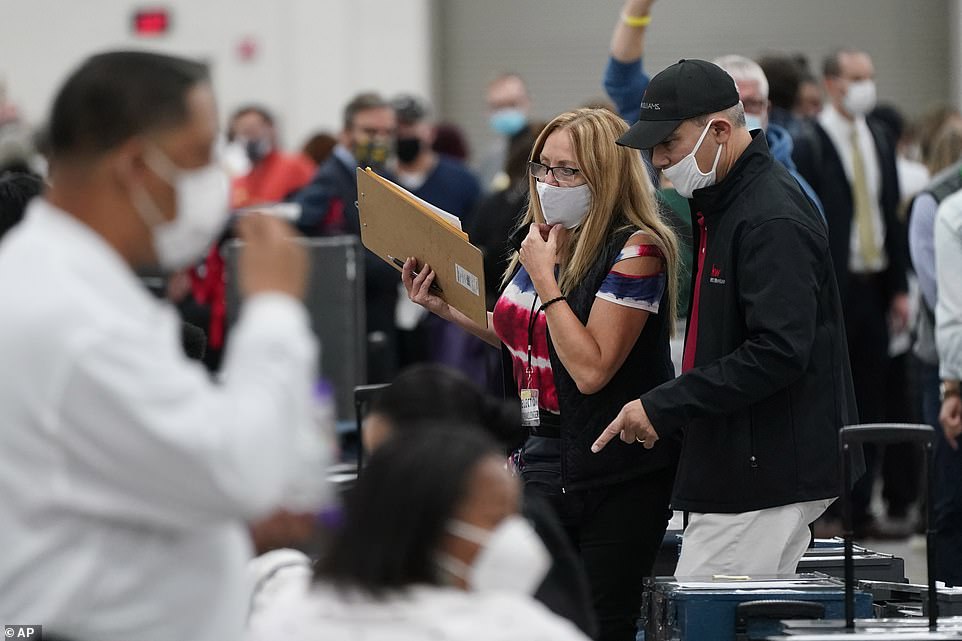 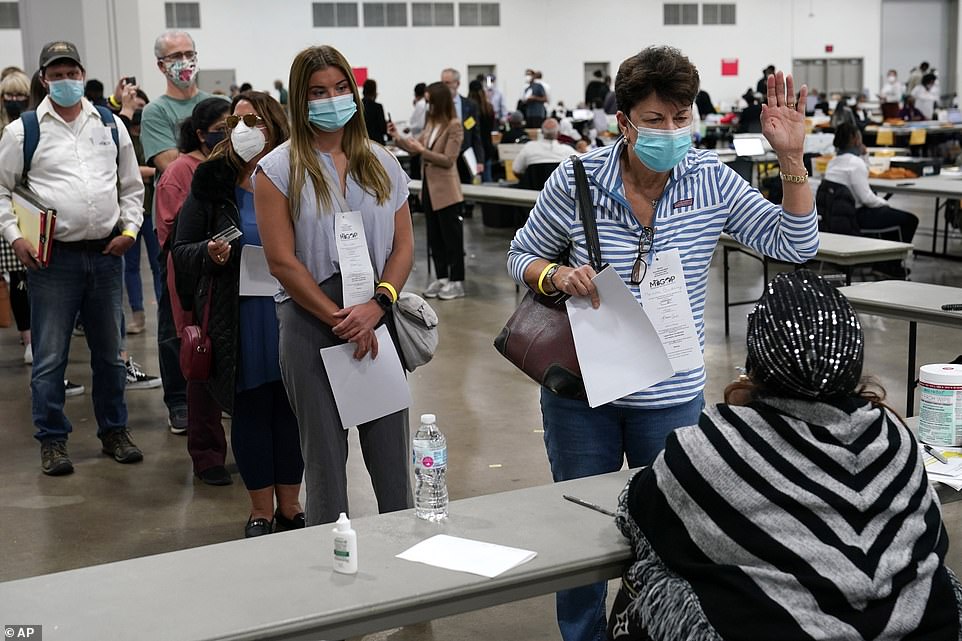 The Trump campaign said it was filing the lawsuit against Michigan claiming it had been denied access to the count.

The campaign didn’t immediately make public a copy of the lawsuit and it wasn’t clear what areas they argue they were denied access to.

Bill Stepien, Trump’s campaign manager, said in a statement: ‘As votes in Michigan continue to be counted, the presidential race in the state remains extremely tight as we always knew it would be.

‘President Trump’s campaign has not been provided with meaningful access to numerous counting locations to observe the opening of ballots and the counting process, as guaranteed by Michigan law.

‘We have filed suit today in the Michigan Court of Claims to halt counting until meaningful access has been granted. We also demand to review those ballots which were opened and counted while we did not have meaningful access. President Trump is committed to ensuring that all legal votes are counted in Michigan and everywhere else.’

The counting continued in the state anyway and Biden was declared the winner by CNN late afternoon.

Trump claimed overnight that he had won the entire election, labeling it a ‘fraud’ that he didn’t yet have enough electoral college votes and vowing to go to the Supreme Court to challenge it.

At midday on Wednesday he tweeted: ‘They are finding Biden votes all over the place — in Pennsylvania, Wisconsin, and Michigan. So bad for our Country!’

He added: ‘They are working hard to make up 500,000 vote advantage in Pennsylvania disappear — ASAP. Likewise, Michigan and others!’ 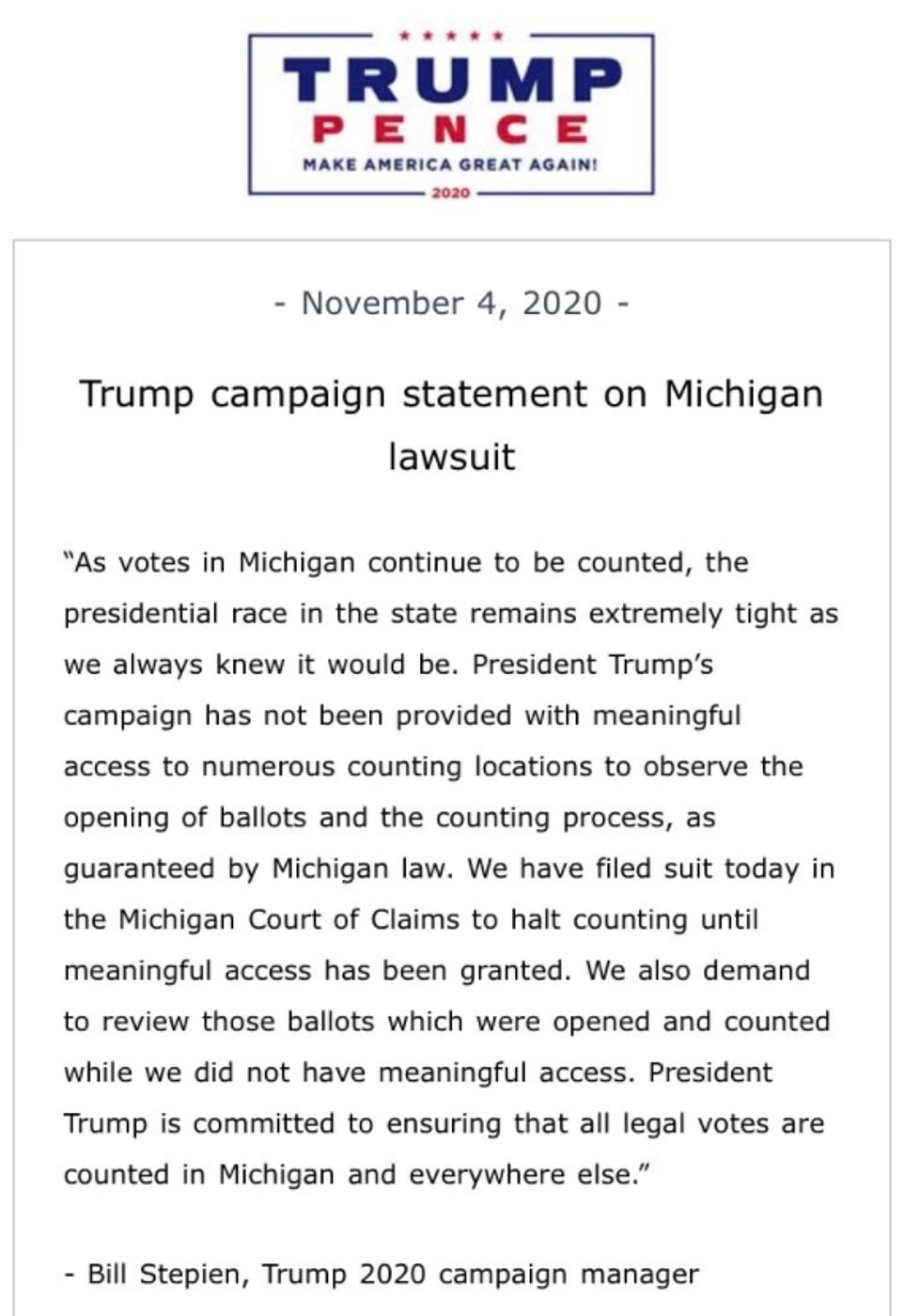 Biden all but declared election victory Wednesday afternoon after CNN called Michigan for the Democrat, giving him another 16 electoral college votes.

Nevada, North Carolina, Georgia and Pennsylvania all remain in play as Wisconsin was also declared as a win for Biden.

Trump can now only win if he takes them all.

Biden only needs Nevada or any of the other states to triumph.

On Wednesday afternoon, as his chances at shrank, Trump claimed victory in Pennsylvania – despite there being 15 percent of the vote left to to count – Michigan, despite it being called for Biden – North Carolina and Georgia – where votes are still being counted.

He claims that votes for him ‘mysteriously vanished’ and that the counting is not being done properly, flatly rejecting the election result as he has been threatening to do for months.

The president is demanding a recount in Wisconsin and he has filed lawsuits in Michigan and Pennsylvania to halt counting, claiming his people have not been allowed to oversee the process and ensure it is being carried out fairly. 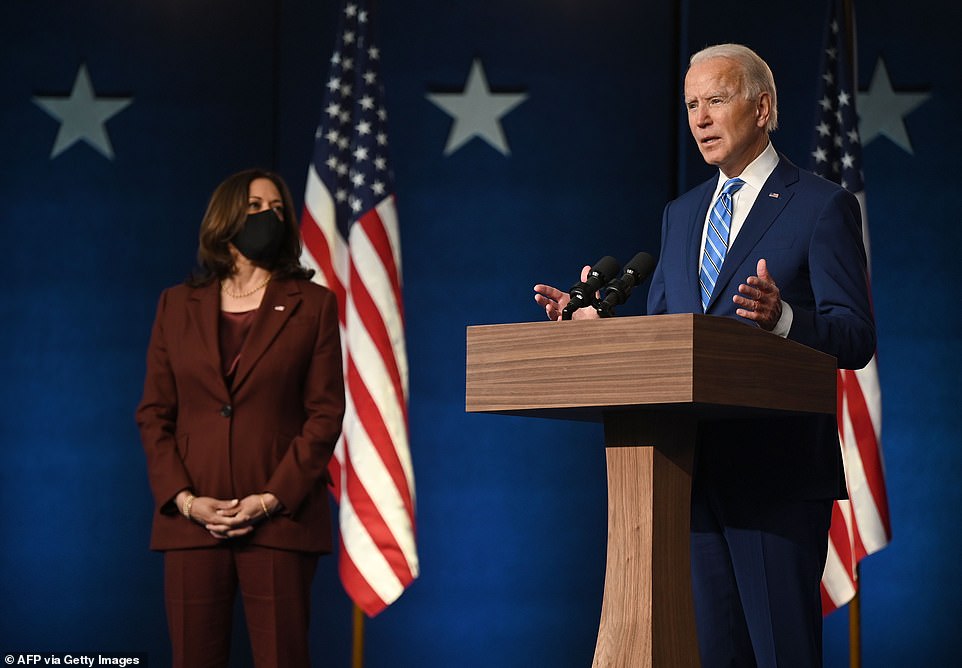 Joe Biden on Wednesday afternoon all but claimed election victory as he said he was ‘confident’ he would win the White House after taking Michigan and Wisconsin. He is pictured with his running mate Kamala Harris by his side 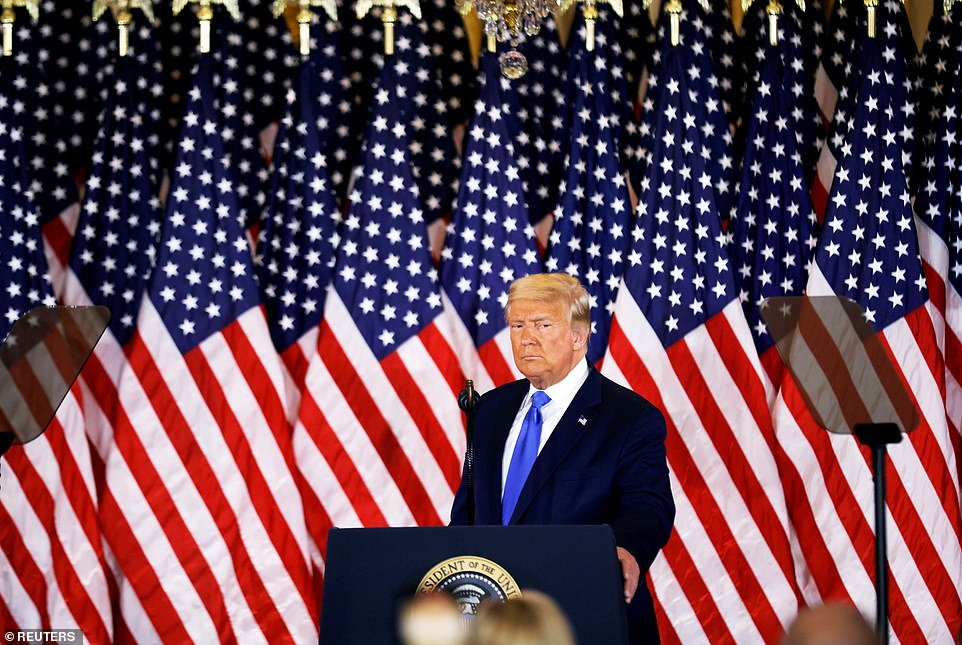 Donald Trump on Wednesday at 2.30am, declaring election victory despite many of the votes still being counted. He has vowed to go to the Supreme Court to challenge what he is calling a ‘fraud’ outcome so far

Biden at a press conference on Wednesday, was unperturbed by Trump’s last-ditch efforts to snatch back the likelihood of a second term.

‘After a long night of counting it’s clear we are winning enough states to win the presidency. I am not here to declare that we won but I am here to report that when the count is finished we believe we will be the winners.

‘We have won Wisconsin by 20,000 votes. In Michigan, we lead by over 35,000 votes and its growing. We have a substantially bigger margin than trump won Michigan in 2016.

‘Michigan will complete its vote soon. I feel very good about Pennsylvania. Virtually all remaining ballots to be counted are cast by mail and we’ve been winning 78% of the votes by mail in PA.

‘We flipped Arizona and the 2nd district in Nebraska. We won the majority of the American people and every indication is that the majority will grow.

‘Senator Harris and I are on track to win more votes than any ticket in the history of this country – over 70million votes. I’m very proud of our campaign,’ he said. 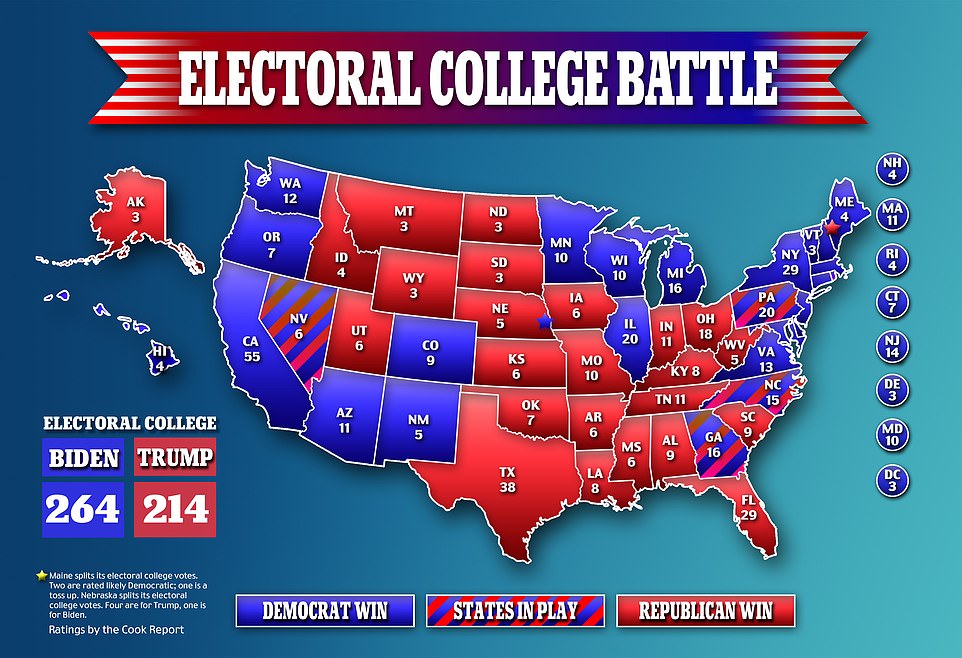 A breakdown of the electoral college shows how much each state is worth. This was the situation before the first votes started coming in. There have not yet been any major surprises. Florida, Ohio, Pennsylvania, Wisconsin and Michigan are the key swing states and Trump won Ohio and Florida