He says he will be making a big reveal about the government shutdown and border security at 3pm EDT at the White House.

‘I will be making a major announcement concerning the Humanitarian Crisis on our Southern Border, and the Shutdown, tomorrow afternoon at 3 P.M., live from the @WhiteHouse,’ he said in a Friday evening tweet.

His spokeswoman said she didn’t want to get in front of his remarks as she encountered reporters shortly after.

Trump could be declaring a national emergency, though, so he can use military resources to build a physical barrier on the border. 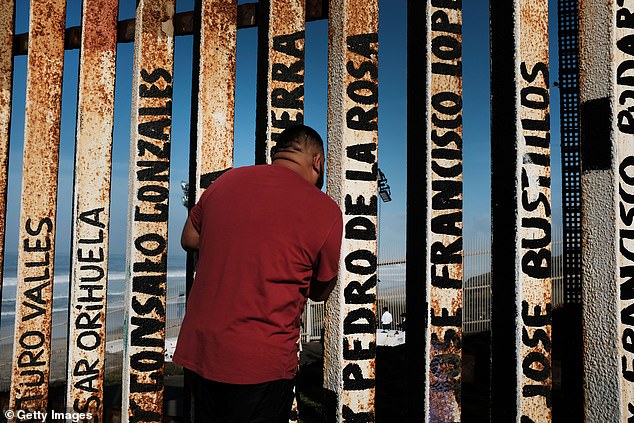 A man stands in front of a border fence that divides a beach on January 18, 2019 in Tijuana, Mexico

He has resisted the action that will be aggressively challenged in court. The president has also said he will summon all of the powers of the executive branch to to build his border wall if Democrats will not give him the funds he’s demanding, however.

They have been in a stand-off over border security for 28 days and remain at an impasse.

Congress is in recess until Tuesday of next week — Monday is a federal holiday — and many lawmakers are not expected to return until the following week unless there are votes.

The president took action on Thursday to keep House Speaker Nancy Pelosi, at least, in town, so they could continue to negotiate, despite the fact that they have not met since he abruptly ended talks last week. 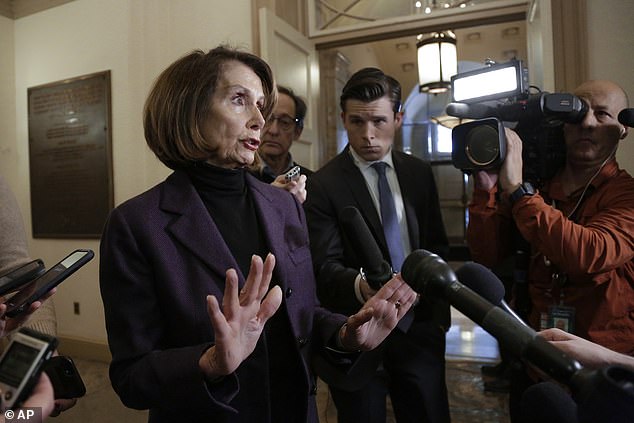 The president took action on Thursday to keep House Speaker Nancy Pelosi, at least, in town, so they could continue to negotiate. She is pictured above on Friday on Capitol Hill in Washington

Trump recalled her congressional delegation’s military escort to Afghanistan after they had already loaded a bus that was taking them to Joint Base Andrews.

She accused him Friday of endangering lawmakers with the public declaration that heightened the security risk for members who planned to make the trip commercially.

The trip to Afghanistan, as with most warzone visits, had been a secret.

In a Thursday tweet before he informed her the trip had been canceled, he claimed the Senate Minority Leader Chuck Schumer was ‘groveling,’ but the House leader was refusing appeals to end to the government shutdown, because she’s beholden to the radical left.

He said later in a national security speech that Pelosi will not let lawmakers work with him to come to a border security solution.

Until then, the federal government will remain shutdown because congressional Democrats refuse to approve border security, he said.

The president brought up the situation at the southern border during a speech on his Missile Defense Review at the Pentagon.

‘I would like to briefly address another matter of critical national security, the humanitarian and security crisis at our southern border,’ he said leading into his daily pitch for a border wall. ‘Without a strong border, America’s defenseless, vulnerable and unprotected.’

He thanked the military for ‘helping us out during the big caravan period’ as he made reference to another group of Central American migrants that has reportedly formed.

‘Thousands and thousands of people. We don’t know where they’re from, who they are, nothing,’ he asserted. ‘We need strong borders. We need strong barriers and walls. Nothing else is going to work. Everyone knows it. Everybody’s saying it now. Just a question of time.’

This week the No. 2 Democrat in the House, Steny Hoyer, admitted that walls ‘obviously’ work sometimes and that the barrier is not ‘immoral’ on its face. Rep. Katie Hill, a California Democrat, has also said a physical barrier like Trump wants could be effective.

‘While many Democrats in the House and the Senate would like to make a deal, Speaker Pelosi will not let them negotiate,’ Trump said of the status of the shutdown. ‘The part has been hijacked by the open borders fringe.’

Trump said earlier in a tweet that had no apparent connection to any news story, but appeared to be about immigration: ‘The Left has become totally unhinged. They no longer care what is Right for our Countrty!’

The president misspelled the word ‘country’ in the message. He did not send out a corrected version of the tweet.

He went on to bash Schumer, the Senate Democratic leader, in a tweet for ‘groveling’ for another meeting at the White House.

Trump walked out of their last one and hasn’t spoke to the party leader since.

Schumer offered to come back to the table as he spoke to reporters on Tuesday, if Trump will have him.

‘I’ll meet with him anytime he wants. As you know, the last I spoke with him was when he walked out, threw a temper tantrum and walked out, so we haven’t heard from him since then.’

Trump said earlier in a tweet that had no apparent connection to any news story, but appeared to be about immigration: ‘The Left has become totally unhinged. They no longer care what is Right for our Countrty!’

Schumer’s office did not have a comment on the president’s tweet. The senator has not commented, either, on the CoDel cancellations.

The argument over military-supported trips is part of a broader fight the president is waging right now against Democrats who will not give him the $5.7 billion he’s demanding for his border wall.

He has overseen a partial government shutdown for nearly a month over their refusal to approve the funds.