President Donald Trump blasted Seattle officials for not doing more to shut down an autonomous protest zone in the city as he threatened to take action if they didn’t intervene.

Speaking in a Fox News interview with Sean Hannity on Thursday night, the president hit out at ‘Democrat-run’ cities where protests against racial injustice are ongoing.

Trump also claimed that if his rival Joe Biden were to be elected he would ‘have that be the whole country’ accusing the former Vice President of being unable ‘to put two sentences together’. 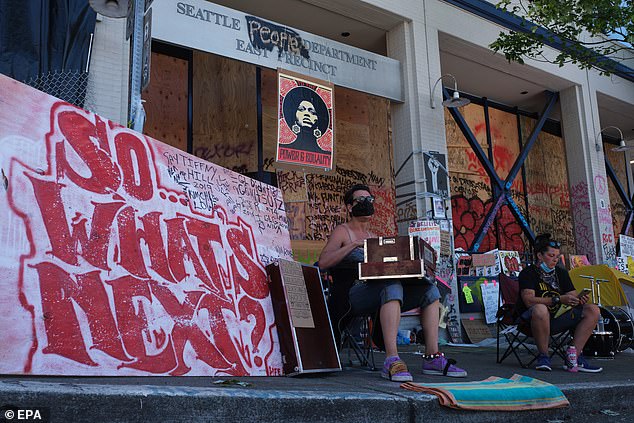 ‘Because what’s happening, they’re taking over American cities. In all cases, its Democrats. They’re Democrat-run, in all cases.’

‘Joe Biden would have that be the whole country,’ Trump added.

‘It’s so crazy what is happening. Here’s a guy that doesn’t talk. Nobody hears him. When he talks, he can’t put two sentences together. I don’t want to be nice or un-nice, OK? But I mean, the man can’t speak,’ Trump said.

During the prerecorded interview, Trump also hit out at John Bolton ahead of his publication of his tell-all memoir ‘The Room Where It Happened’.

‘He didn’t do a good job,’ Trump said of Bolton.

‘He’s the only man I think I ever met – I knew him for a year – I don’t think I ever saw him smile once. I said to him, ‘John, do you ever smile?’ And it tells you something about somebody,’ the president added.