The White House insisted Thursday that President Donald Trump has not arrived at a decision yet on DACA, the Obama-era program protecting illegal immigrant children from deportation.

A senior administration official told Fox News that Trump is determined to ax it – and he could make a formal announcement as soon as tomorrow afternoon.

White House Press Secretary Sarah Huckabee Sanders told journalists shortly after the item went up that the policy was still under review, though, and took a slap at the president’s favorite news network.

‘No offense to your colleague from Fox News, but I think I’m a little better informed than they are in terms of when the White House has made a decision,’ Sanders told a reporter from the New York Times, ‘and as I just said, it has not been finalized and when it is we will certainly let you know.’

An senior adviser to President Trump told DailyMail.com this morning that Trump had not ‘firmed up’ a decision, citing Tropical Storm Harvey and the unexpected amount of time and energy federal officials had spent responding to it.

Another administration official told Fox News later in the day that Trump is terminating the program, and an announcement could come as soon as Friday. 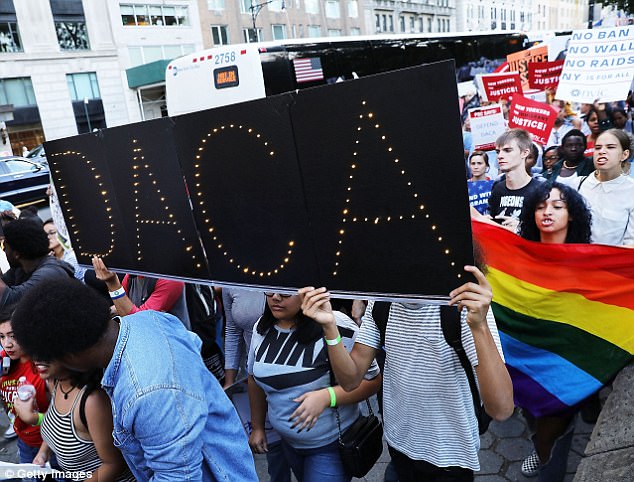 Protesters marched on Trump Tower on Wednesday urging the president to keep DACA, or the Deferred Action for Childhood Arrivals program, in place

Some 800,000 illegal immigrants who came the the U.S. as children are under the protection of the Obama-era program.

DACA, the acronym for Deferred Action for Childhood Arrivals, allows so-called Dreamers, undocumented immigrants who came to the country as kids, to remain in the United States semi-permanently.

As a candidate, Trump said he would end the program that Barack Obama’s administration put into place in 2012.

But his White House said as soon as he took office that it had no immediate actions planned and that it was mainly focused on the removal of criminals.

Trump said himself in April that Dreamers should ‘rest easy’ for the same reason.

‘This is a case of heart’ he said at the time.

An NBC News/Survey Monkey poll released this morning affirmed the popularity of the program with Americans.

Nearly two thirds, 64 percent, said they supported DACA, while 30 percent said they are opposed it.

Roughly as many Americans, 68 percent, said in the same poll that they view illegal immigrants as a ‘serious problem.

Despite their concerns about illegal immigration broadly, a large percentage of Americans, 71 percent, also said they believed undocumented immigrants working in the United States should have a pathway to a legal status.

The mixed messages suggest Americans have a nuanced view of the country’s illegal immigration fight, especially when it comes to Dreamers.

White House Press Secretary Sarah Huckabee Sanders told reporters flying from Missouri back to Washington yesterday with the president that Trump was still mulling his options.

‘They’ve taken a lot of accounts, certainly, into this process. This has been a very lengthy review and it’s certainly not over. It’s something that is still being discussed and a final decision hasn’t been made,’ she said, as speculation continued about what Trump might do with the DACA program.

A senior White House official indicated this morning to DailyMail.com and other outlets that nothing had changed.

‘It’s been a lengthy review process, and the president still hasn’t firmed up his decision,’ the official said, bringing up the ‘unexpected circumstance of the hurricane which is absorbing the president, the vice president, really the Cabinet’s…time and thoughts.’

The official then said, ‘also we want to hear from Congress.’

Reports circulating last week said that Trump was due to make a decision in the coming days.

The adviser said that was not necessarially the case.

‘The one thing that we’re not really excited about are artificial time frames,’ the Trump aide said.

The remark about Congress raised the prospect that the administration would be willing to get behind legislation that grants Dreamers permanent resident status or offers them a pathway to citizenship.

Lawmakers have proposed to do both at times.

‘We call on President Trump to protect DACA and Dreamers – and we need every single Member of Congress and Senator to co-sponsor legislation that would allow Dreamers to work and live in the U.S. and demand a vote on the floor of the House and Senate,’ FWD.us President Todd Schulte said this week.