Trump to North Dakota in search of votes for tax reform

President Donald Trump will hold talks with lawmakers who could make or break his tax reform aims at the White House next week.

Congress returns from its summer recess on Tuesday. Trump will host GOP leaders in the House and Senate at the White House right away.

A bipartisan meeting is on the books for Wednesday. Trump’s due to hold a tax reform event in North Dakota, the home state of Democratic Sen. Heidi Heitkamp, the same day.

Heitkamp is one of four Senate Democrats the White House is hoping to win over as it searches for votes for the president’s tax reform package. The Democratic lawmaker is up for reelection next year.

Trump won her North Dakota by more than 35 points in his November race, which makes Heitkamp ripe for the poaching.

With a 52-seat majority, Republicans are eight votes shy of the super-majority they’d need to approve tax reform legislation with no support from Democrats.

A senior White House official told DailyMail.com yesterday that Heitkamp and Sens. Joe Donnelly of Indiana and Joe Manchin of West Virginia were at the top of the administration’s pick-up list.

The three senators kept their names off of a letter their colleagues sent the president demanding that the GOP back away from tax cuts for the wealthy.

‘So, there’s a little bit of hope there that maybe those three and others will see the light and will be able to go back to their states and say to their constituents, “We know you needed tax reform and tax relief and we delivered it to you,” ‘ a Trump aide said of their refusal to sign the letter.

Trump put the squeeze on Sen. Claire McCaskill, another Democrat, during his speech this week in Springfield, Missouri.

It’s unclear who else the White House might turn to for votes. Trump won 10 states last year where Democratic senators are up for reelection, including Missouri, North Dakota, West Virginia and Indiana. The White House has intentionally started there.

‘I would love to see all of them come on board. I can’t imagine why anybody wouldn’t want to support helping more Americans keep more of their hard-earned money,’ she said.

Pressed to say whether the White House is eyeing anyone else, given that it takes 60 to overcome a filibuster in the Senate, Sanders admitted that no one else came to mind.

‘Not specifically,’ she said. ‘Again, I’m hoping that the senators from all 50 states get on board to help Americans and do what, frankly, Americans are demanding.’

An email to the president’s legislative affairs director after the briefing went unanswered. 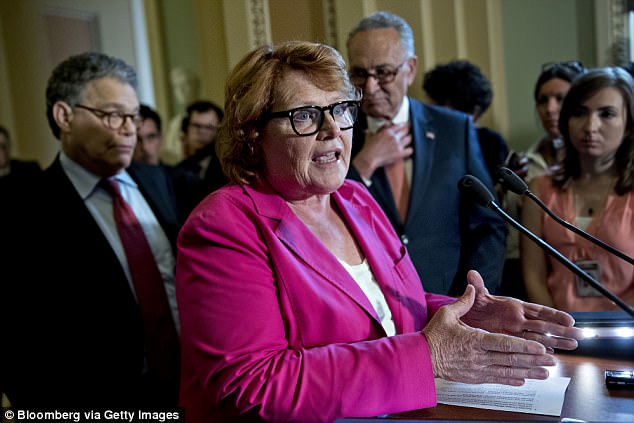 Trump’s due to hold a tax reform event in North Dakota, the home state of Democratic Sen. Heidi Heitkamp, the same day

The president’s meeting Wednesday with a bipartisan group of legislators could reveal other soft points in the Democratic caucus.

Trump has also pushed Senate Majority Leader Mitch McConnell to end the filibuster, bringing the number of votes he’d need in the Senate down to 50 if the vice president acts as a tiebreaker. McConnell has said, though, that he will not abandon 100 years of precedent to force through the president’s agenda.

Trump said this week that he wants to lower the corporate tax rate to 15 percent from 35 percent. GOP leaders in the House believe in the same general principle, although they have a higher rate, 20 percent, in mind.

House Speaker Paul Ryan has also endorsed an overhaul of the income tax brackets that would see the number of rates go from seven to three. But he and the administration disagree on what those rates should be.

‘We’ve already agreed on the outlines and now we’re refining the micro-details,’ Ryan said during an event in Milwaukee this week.

He and House Ways and Means Chairman Kevin Brady will come to the White House on Tuesday for a meeting with Trump that McConnell and Senate Finance Chairman Orrin Hatch are also supposed to attend.

The lawmakers put out a joint statement at the end of July with Treasury Secretary Steve Mnuchin and National Economic Council Chairman Gary Cohn that said their mission, above all, ‘is to protect American jobs and make taxes simpler, fairer, and lower for hard-working American families.’

‘We’re pushing forward. We’re going to continue, again, focused on those four principles using that as the guide and the focal point moving forward,’ Sanders affirmed in today’s briefing, ‘and sit down with a lot of members of Congress to make sure we get this deal done.’