President Trump wished Americans a happy new year and shared a video showing highlights from his first in office.

‘What a year it’s been, and we’re just getting started,’ Trump tweeted Sunday. ‘Together, we are MAKING AMERICA GREAT AGAIN! Happy New Year!!’

The video features some of Trump’s most visually interesting moments spliced with audio of the president’s speeches.

From the first 100 days, the president included scenes from inauguration and of his first joint address before Congress, as the annual speech isn’t called the ‘State of the Union’ until the president’s second year.

He made sure to include one of his biggest accomplishments, his appointment and the confirmation of Supreme Court Justice Neil Gorsuch, Trump’s first to take the bench.

The president has since made news for the confirmation of a number of conservative justices to the lower courts, which could reshape the judiciary in the country for decades.

Included in the video was his one big legislative accomplishment as well, the passage, which happened this month, of the GOP tax bill.

The president is seen reveling in the bill’s passage at the White House with Republican members of the House and Senate. 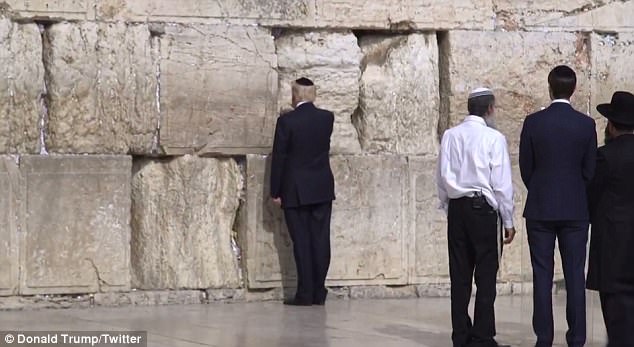 President Trump is seen at the Western Wall in Jerusalem, the most holy site for the Jewish people to pray 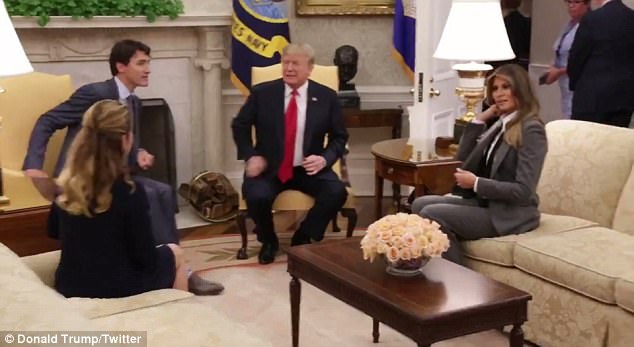 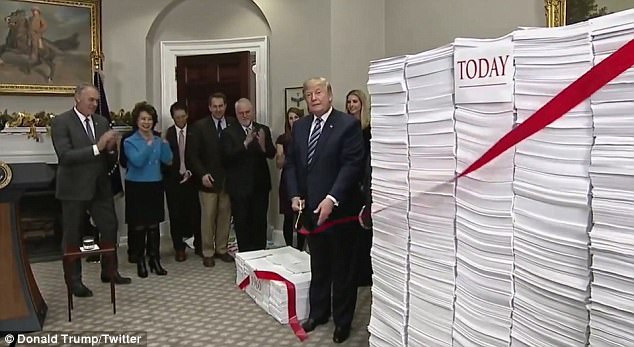 One of the December highlights of the video was this event on government regulations, one of the most visually interesting moments of President Trump’s first year

One of his last orders of business in D.C. before leaving town for Mar-a-Lago was to sign the bill, which was done – as promised by the president – before Christmas.

Another December event, that on cutting federal regulations, was also in the video as it contained one of the most interesting visuals – piles and piles and piles of papers, showing a federal government gone amok.

When President Trump was elected late last year there were many questions about how he would approach foreign policy having never held elected office before.

In the video, Trump highlights many of his diplamtic efforts including hosting Canadian Prime Minister Justin Trudeau and his wife Sophie at the White House, along with scenes from his handful of foreign trips.

Trump is seen at the G-20 in Germany and alongside French President Emmanuel Macron in Paris taking in the city’s Bastille Day fete. 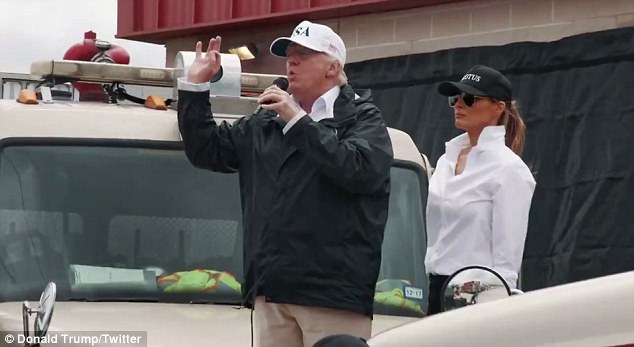 The president’s social media team also included images from his trip to Puerto Rico with first lady Melania Trump (right). The president was criticized for his handling of the hurricane and for throwing paper towel rolls at hurricane survivors 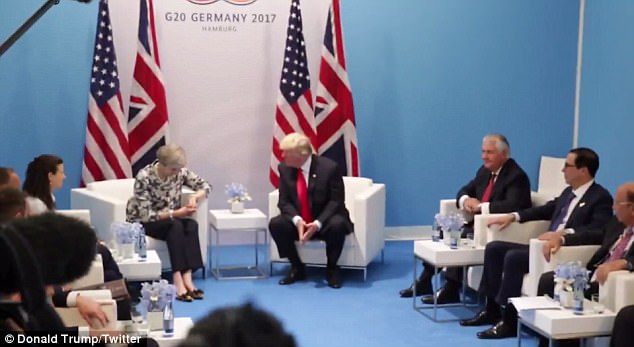 Much of the video featured President Trump’s travels in 2017, including his trip to Germany in July for the G-20

The president is shown on his stopover in Hawaii paying homage to those who died on the U.S.S. Arizona when Japan attacked the U.S. at the start of World War II in Pearl Harbor, but also alongside Japan’s Prime Minister Shinzo Abe, who was the first world leader to meet with the president-elect.

The video also captures President Trump at the Western Wall in Jerusalem, the most holy site Jewish people can pray. It then moves to the White House ceremony where Trump proclaimed that the U.S. embassy to Israel would be moved to the city, a controversial move that increased tensions between the U.S. and the Palestinians.

The video doesn’t completely skirt away from more controversial aspects of the president’s first year, as it shows he and first lady Melania Trump on their trip to Puerto Rico post-Hurricane Maria.

Trump took heat for his handling of the disaster, as he warred with San Juan’s Mayor Carmen Yulín Cruz, and for his jovial attitude during his trip to the island, tossing rolls of paper towels to hurricane victims, as if it were a game.