Donald Trump is putting an advisory on his Orlando rally, saying the official launch of 2020 campaign will be ‘wild,’ after supporters camped out in tents to save their places in line like they were waiting in line for a free concert with Rihanna.

The Republican incumbent set the tone for the monster rally in Florida he’d be appearing at in the evening in a morning tweet that bashed the media and compared the scene outside the Amway Center to a rock tour.

‘The Fake News doesn’t report it, but Republican enthusiasm is at an all time high. Look what is going on in Orlando, Florida, right now! People have never seen anything like it (unless you play a guitar). Going to be wild – See you later!’ he said. 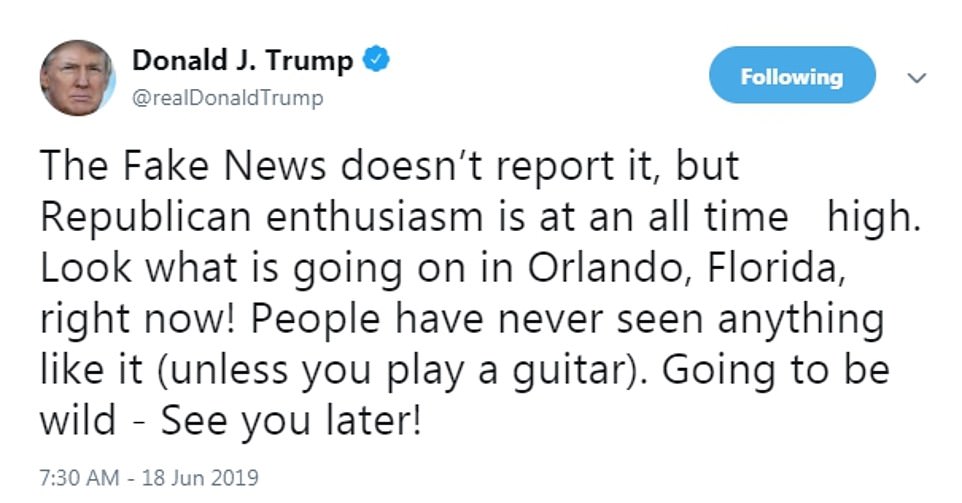 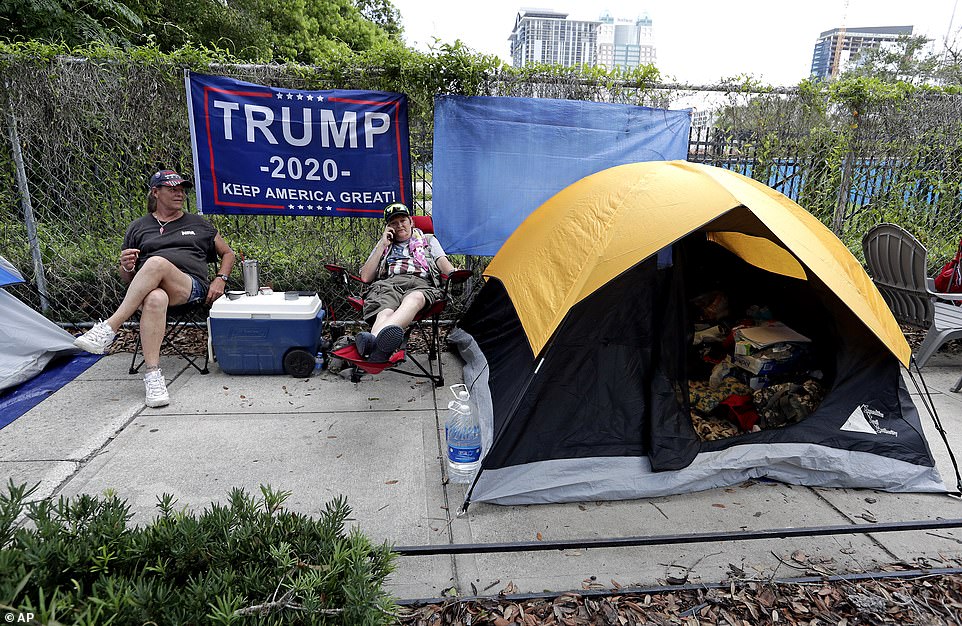 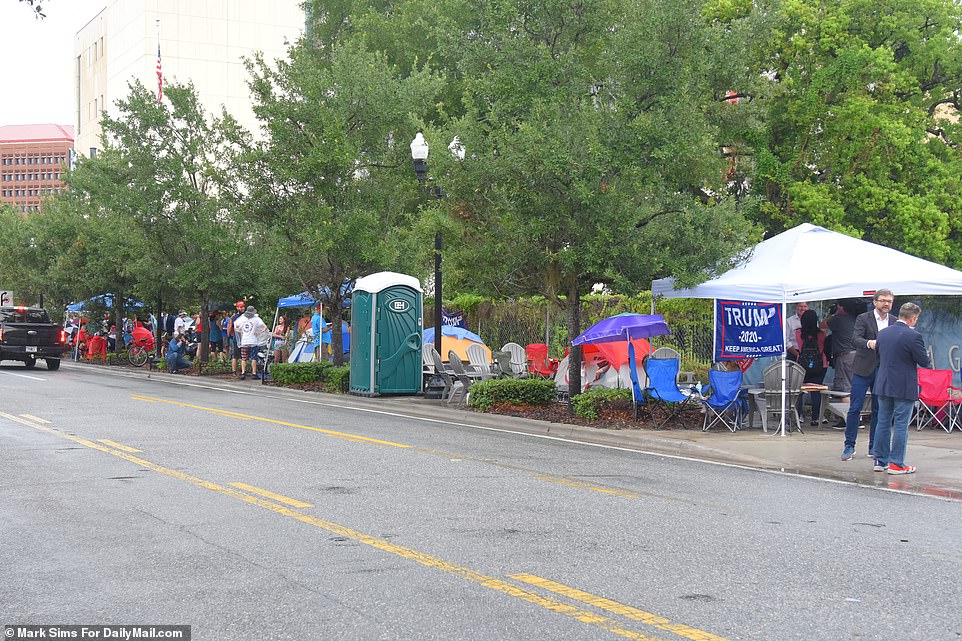 Trump’s campaign is turning the area outside the arena that can seat 20,000 people into a festival-like atmosphere with music and food trucks to help supporters pass the time. It’s expected to be 84 degrees in Orlando on Tuesday, at Trump’s most enthusiastic supporters have been waiting since Monday to be let inside.

The most coveted positions are not seats at all – they are standing positions near the front of the stage. Backers of the president in that area are likely to get a handshake, a selfie or Trump’s autograph at the event that formally marks the beginning of his campaign for a second term.

All of Trump’s children and his wife Melania will be with him at the event, sources told DailyMail.com, as will the Mike Pence, the president’s running mate and the nation’s vice president.

It will be 13-year-old Barron Trump’s first appearance at a campaign rally since his father took office. Trump’s youngest daughter Tiffany, who has not typically treated politics like a family affair, will also be there. 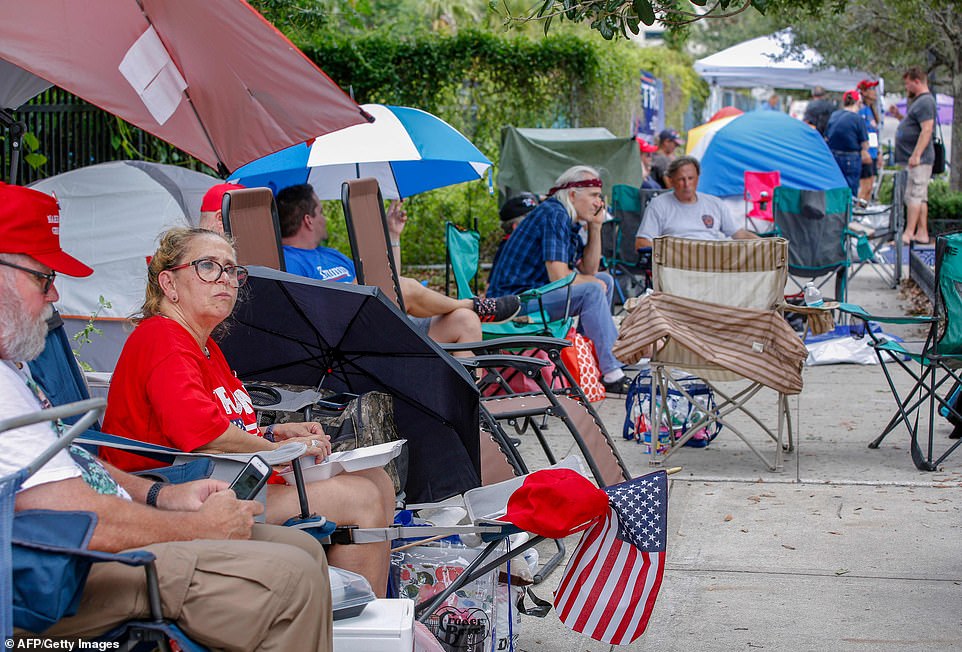 Here for the president: Trump supporters arrived outside the Amway Center as early as 6 a.m. Monday and as the day went on the line grew 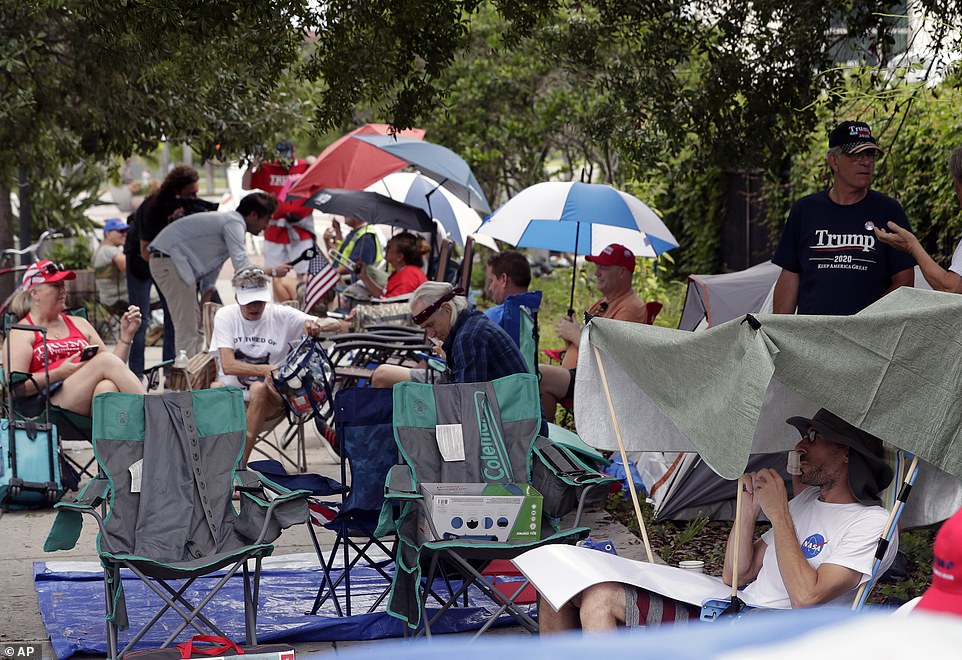 Determined: The early start was an attempt by the fanatical Trump backers to be at the front of the crowd for the campaign kick-off 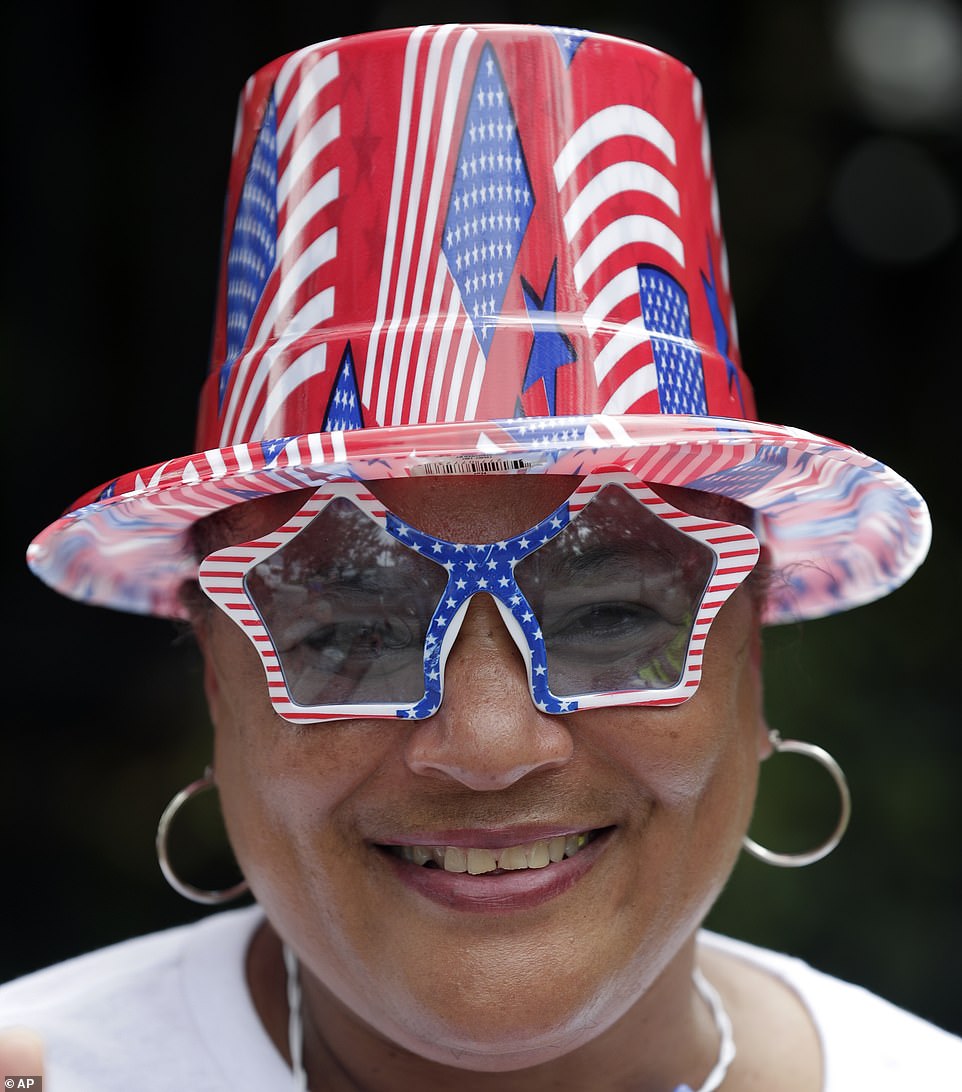 Journey: Kimulita Mann had come from Houston to show her support for Trump 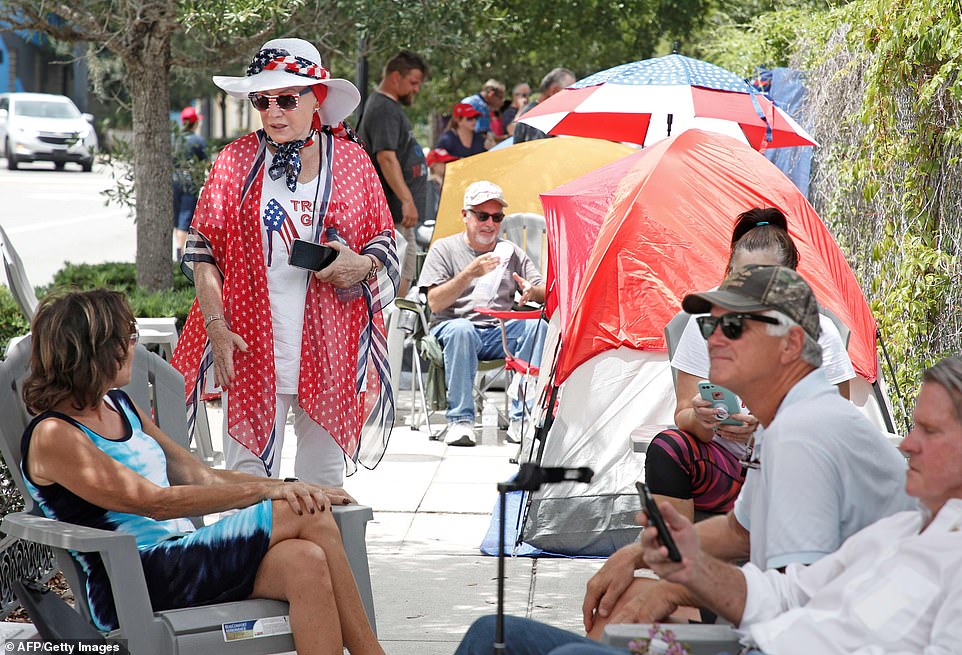 Waiting game: Temperatures in Orlando hit the low 80s as the line grew with Trump supporters 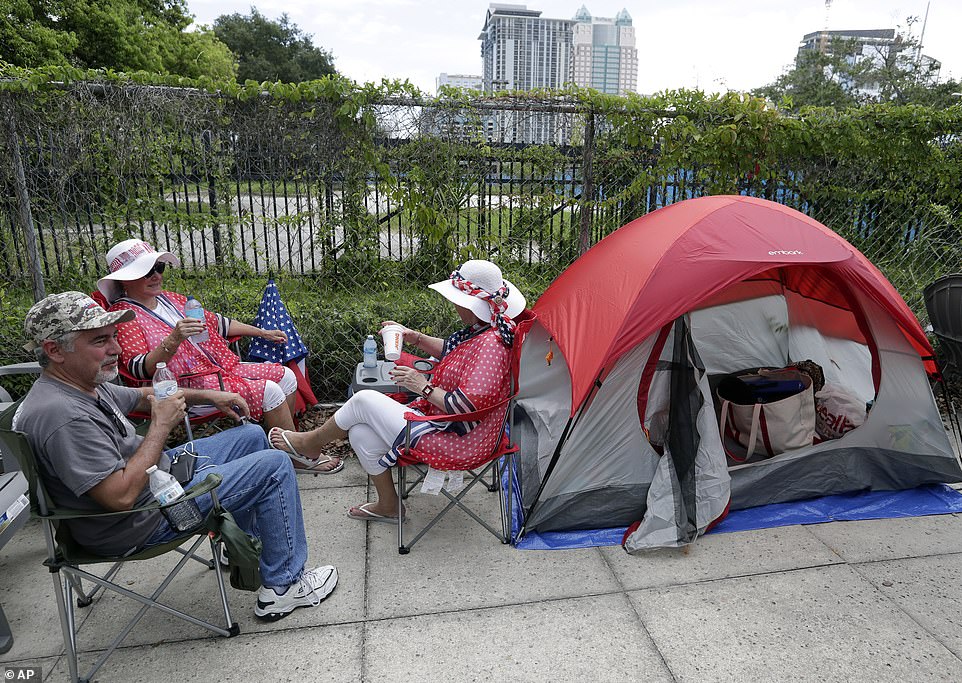 Ready for a night out: Some Trump supporters had brought tents, water and portable seating for the wait 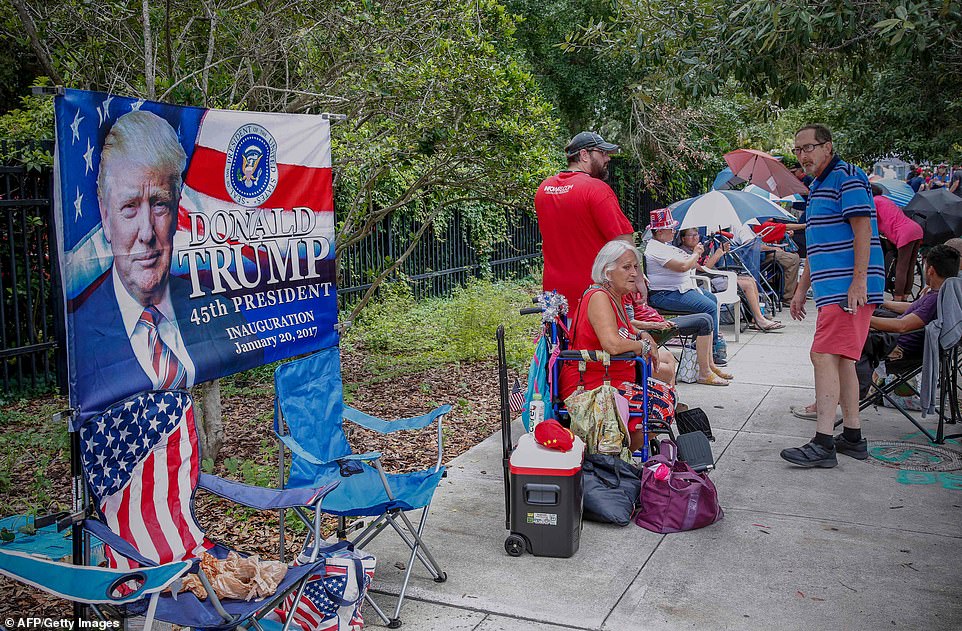 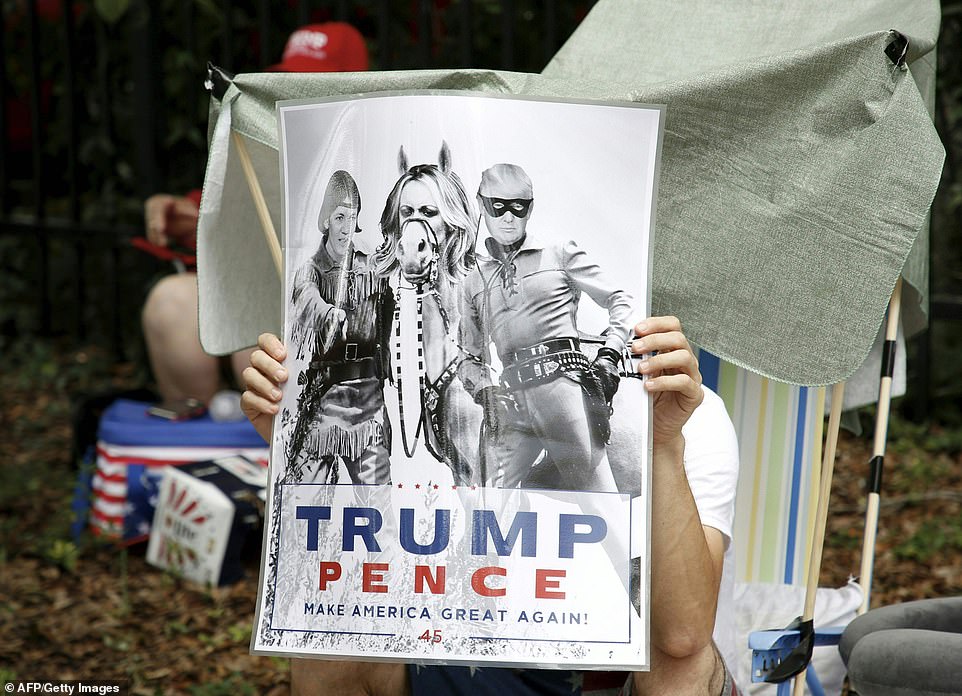 Nickname time: This sign appears to show Trump as the Lone Ranger, Elizabeth Warren as Tonto in a new  version of Trumps ethnic slur directed at the 2020 Democrat over her claims of Native American ancestry, and Stormy Daniels as Tonto’s horse, Scout. Trump called Daniels – who received a payoff to silence her claims of sex with him – ‘horse face’

But Tiffany Trump will be there, a spokeswoman for the Trump family told DailyMail.com.

A spokesperson for the first lady declined to confirm Barron’s attendance. The 13-year-old rarely makes public appearances – he did not join the rest of the family for the president’s state visit to the UK earlier this month – but he attended the president’s first campaign launch in 2015.

President Trump has been boasting about Tuesday night’s rally in Orlando – the formal start of his bid for a second term in the White House – since it was announced earlier this month.

Tuesday also will mark Melania Trump’s first time on the trail after she skipped out on campaigning for Republicans in the 2018 midterm election.

The first lady does not plan to make formal remarks on Tuesday night, according to her office, but given the president’s tendency to call people over to speak, she could end up addressing the crowd.

One family member scheduled to speak is Donald Trump Jr.

The president’s eldest son is a frequent presence on the campaign trail – both with and without his father – and often addresses supporters. He’s also campaigned and raised money for other Republican candidates in the past few years.

His girlfriend Kimberly Guilfoyle is scheduled to be at the rally and has been at other Trump campaign events. She serves as a senior adviser to the president’s campaign.

Jared Kushner will be there with his wife Ivanka Trump, according to an administration official.

It’s unclear if Lara Trump – the wife of Eric Trump – will attend.  She serves as a senior adviser to the president’s campaign but also is pregnant with the couple’s second child. She did make the state trip to the UK in early June.

The president’s five children have been visible supporters of his political ambitions.

All of them were present on June 16, 2015, when Trump famously rode down the escalator at Trump Tower and announced his candidacy for president.

They also were all there on November 9, 2016, after Trump was declared the winner of the election, and on his inauguration day in January 2017.

And they will all make the trek to Florida for Tuesday’s big event.

The president picked Florida to formally launch his re-election bid because the Trumps have made it ‘their second home’and are down there frequently, a campaign source told DailyMail.com.

It’s also going to be a ‘key state in 2020, the campaign source noted, adding the president is very excited to be headed down there.

The Trump family is often 185 miles down I-95 from Orlando at Mar-a-Lago, their club in West Palm Beach. That I-95 corridor is the key swing area for winning Florida, a state needed to win the White House in 2020. 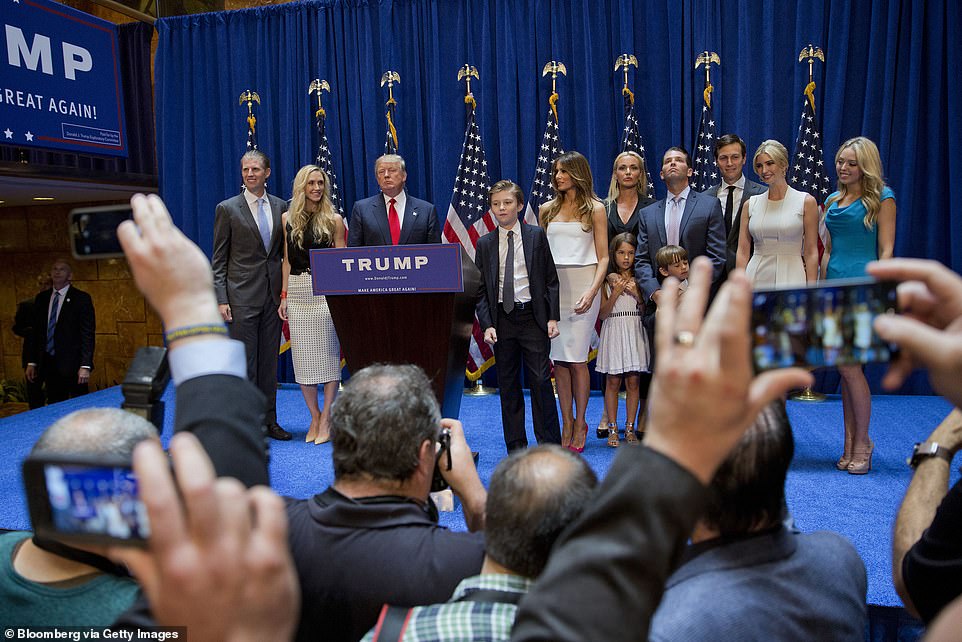 Donald Trump with his family on June 16, 2015 at Trump Tower, New York – the day he announced his first campaign for president 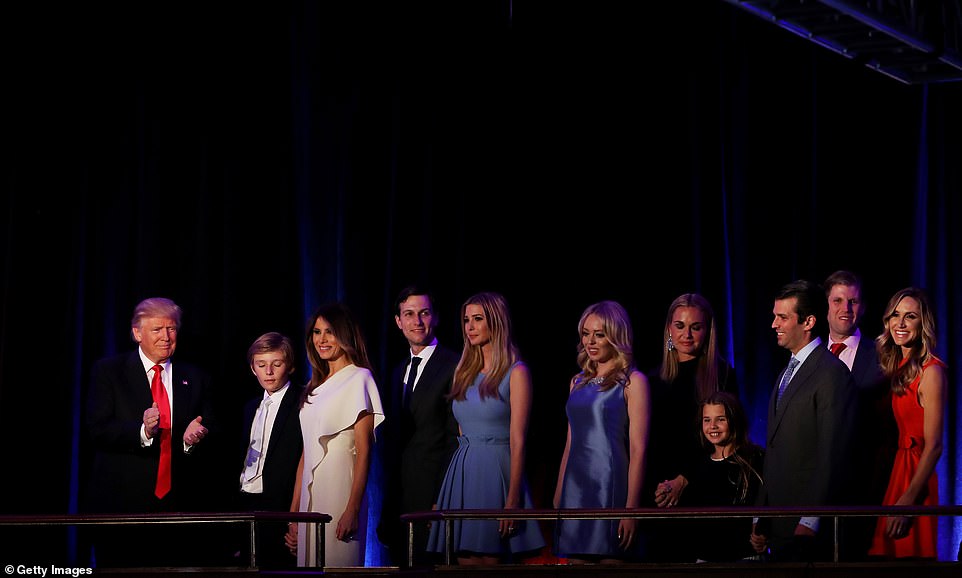 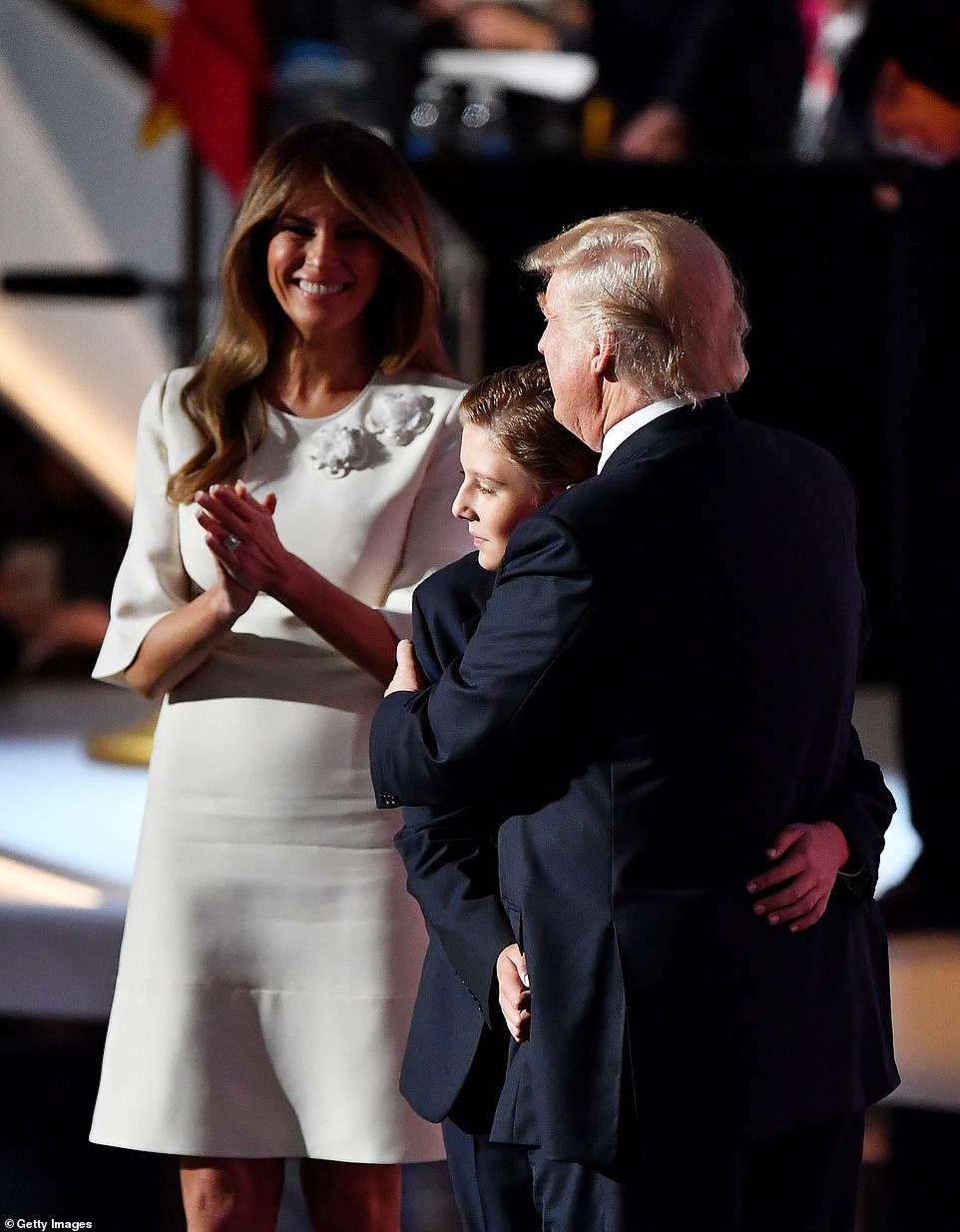 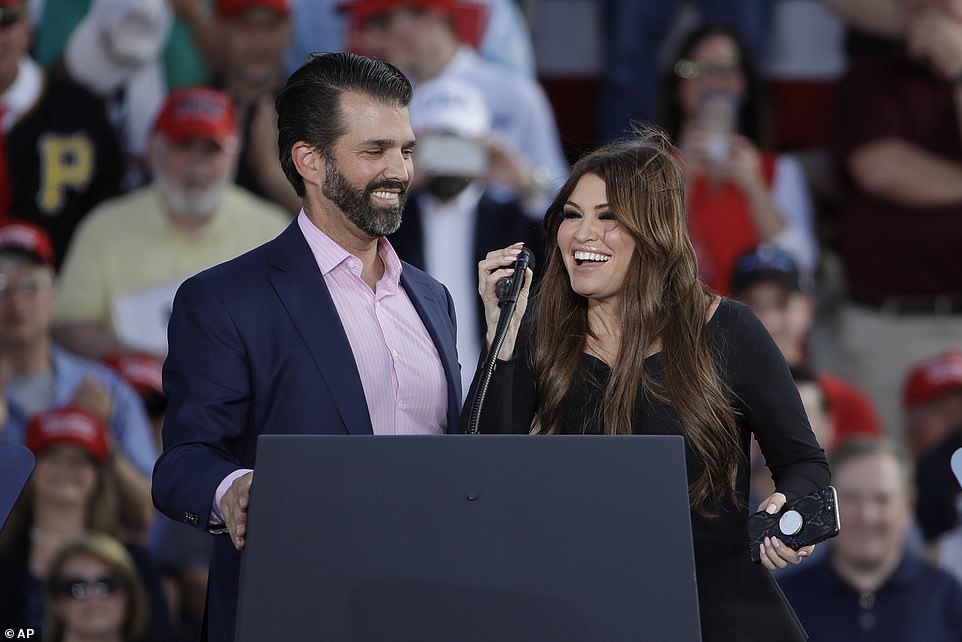 The president is bragging about his upcoming reelection campaign launch, claiming it is already ‘setting records.’

‘Big Rally tomorrow night in Orlando, Florida, looks to be setting records,’ Trump tweeted Monday morning. ‘We are building large movie screens outside to take care of everybody. Over 100,000 requests. Our Country is doing great, far beyond what the haters & losers thought possible – and it will only get better!’

Eight supporters were already camped out on Monday morning, with the first one showing up at 2:30 a.m., Click Orlando reported.

His campaign announced the launch, dubbed the ’45 Fest,’ would start 10 hours ahead of the 8 pm rally time and have a carnival-like atmosphere, complete with food trucks, live music and entertainment and jumbo TV screens to accommodate  the overflow crowd.

Should 106,000 Trump fans show up, the mass of MAGA humanity would be nearly twice the size of an average day’s attendance at Walt Disney World’s Magic Kingdom, a half-hour drive away.

Trump boasted that his reelection efforts are ‘looking really good,’ and claimed the polls that show some of the top-tier Democrats running in the party’s primary are ‘fake.’

‘Only Fake Polls show us behind the Motley Crew,’ Trump tweeted, creating a new nickname for the two dozen Democrats running.

‘We are looking really good, but it is far too early to be focused on that. Much work to do! MAKE AMERICA GREAT AGAIN!’ he continued.

Democratic candidates, however, haven’t come close to the crowd-size the president is touting.

Biden’s first campaign stop last week in Iowa drew fewer than 100 people to the town of Ottumwa, but his campaign kickoff event, an outdoor speech in Philadelphia, drew an estimated 6,000 people. 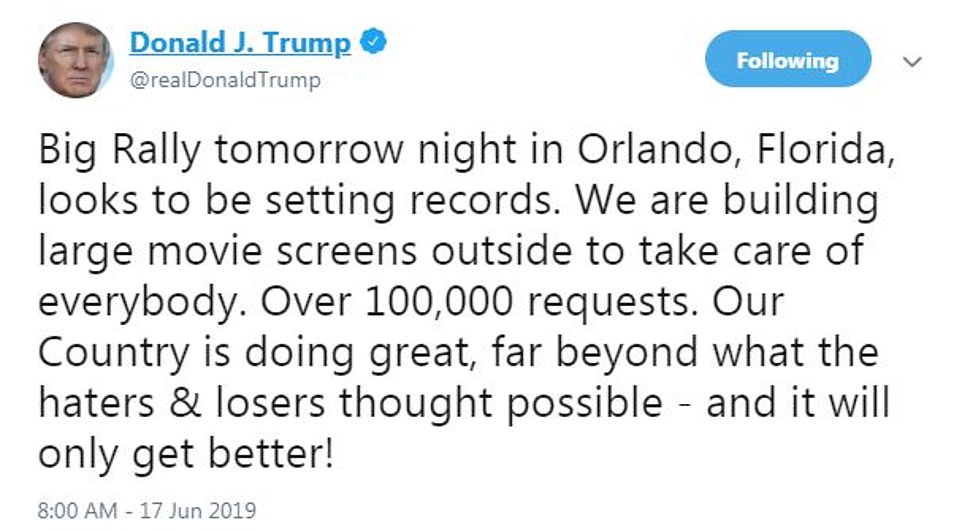 Trump said his launch, which will be held at Orlando’s 20,000-seat Amway Center, is ‘setting records’

He also claimed it was too early to focus on the polls. Last year around the same time in the campaign schedule, Trump was 17 percentage points behind Democratic opponent Hillary Clinton 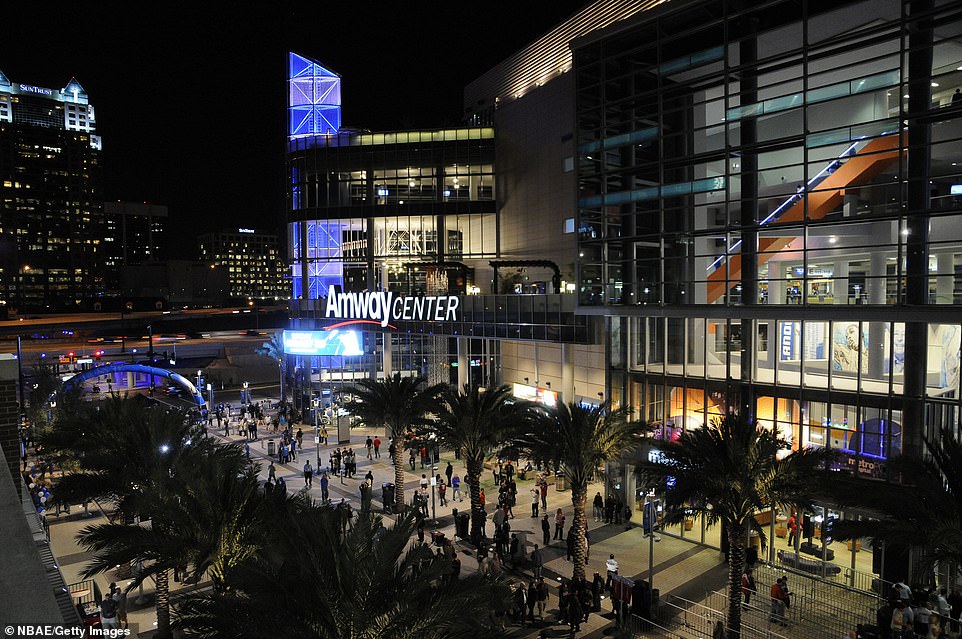 The event is being held at Orlando’s Amway Center, which has a maximum capacity of 20,000 people for sporting events; Trump claims 106,000 people have requested tickets 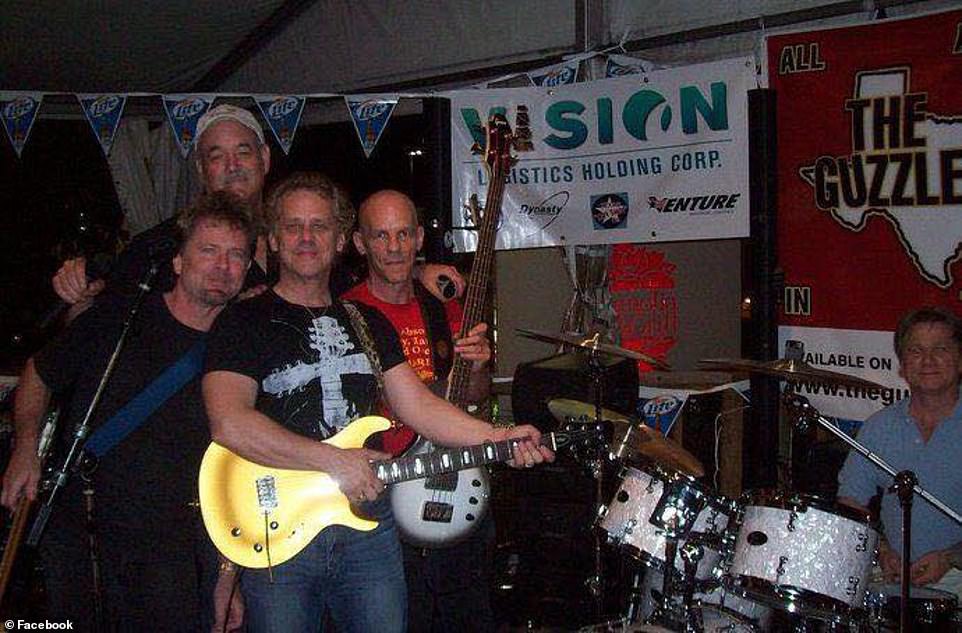 The campaign tasked a booking agent with finding a band to play outside for Trump fans; ‘The Guzzlers’ from Houston, Texas

California Sen. Kamala Harris’s campaign launch rally in Oakland was seen in person by about 20,000 people. Sanders held several rallies that size in 2016.

Sanders’ campaign says that at his opening event in Brooklyn, New York this year he spoke to an audience of 13,000.

Trump’s campaign hired band is a Houston-based quintet called ‘The Guzzlers.’ A member who gave his name as ‘Dancin’ Dave’ told DailyMail.com that they got the job through a Texas-based booking agent.

‘I don’t really know how we got picked,’ he said in a brief phone interview as he set up for a gig in Baton Rouge, Louisiana.

‘We’re just a bunch of old rockers with day jobs. We’re recovering musicians, if you want to know,’ he said.

The group’s website pictures an aging party band whose members go by names like ‘Wildeman’ and ‘Johnny Gator.’

‘We believe playing keeps us young,’ it says. ‘Together, we have more than 200 years of experience.’

Dancin’ Dave wouldn’t comment on whether The Guzzlers are Trump supporters.

He said they are known for charity events that benefit the St. Jude’s Children’s Research Hospital, the institution that Eric Trump has raised millions for with golf tournaments.

‘We’ve been doing that work for quite awhile,’ he said.

The president’s son said in a text message that it was a coincidence and he didn’t recommend them. 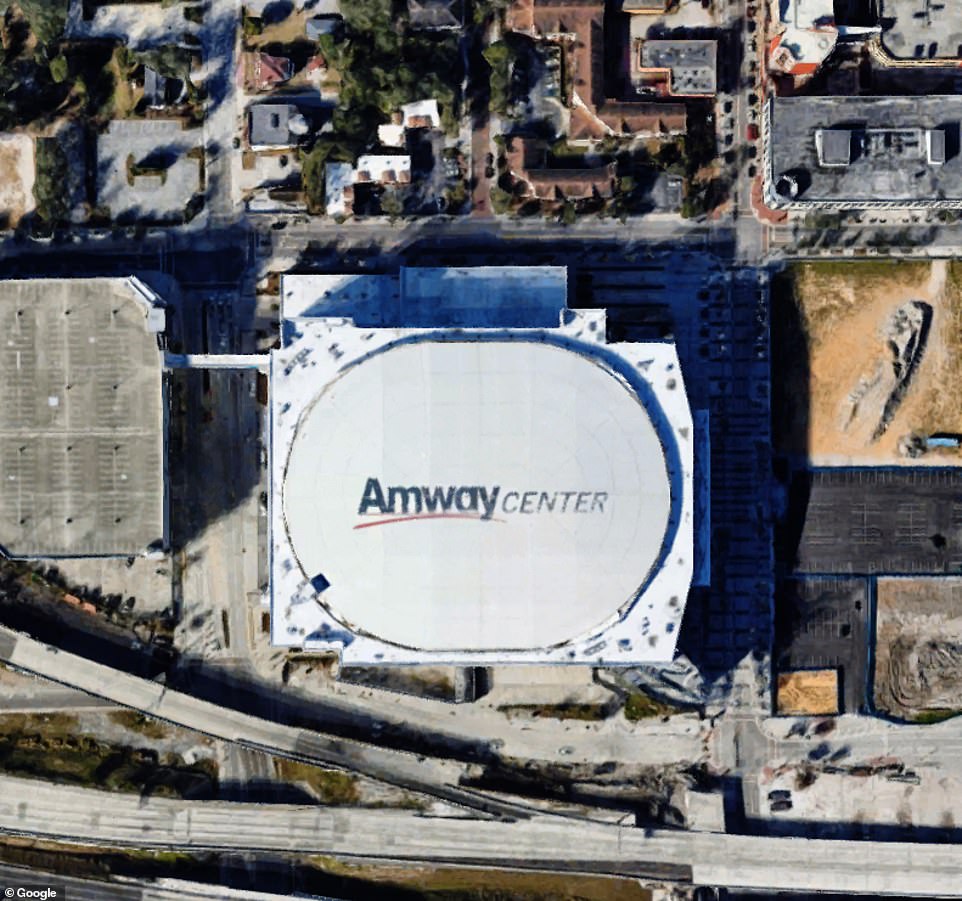 Where to put them all? The neighborhood around the Amway Center, seen from above, doesn’t lend itself to massive public gatherings 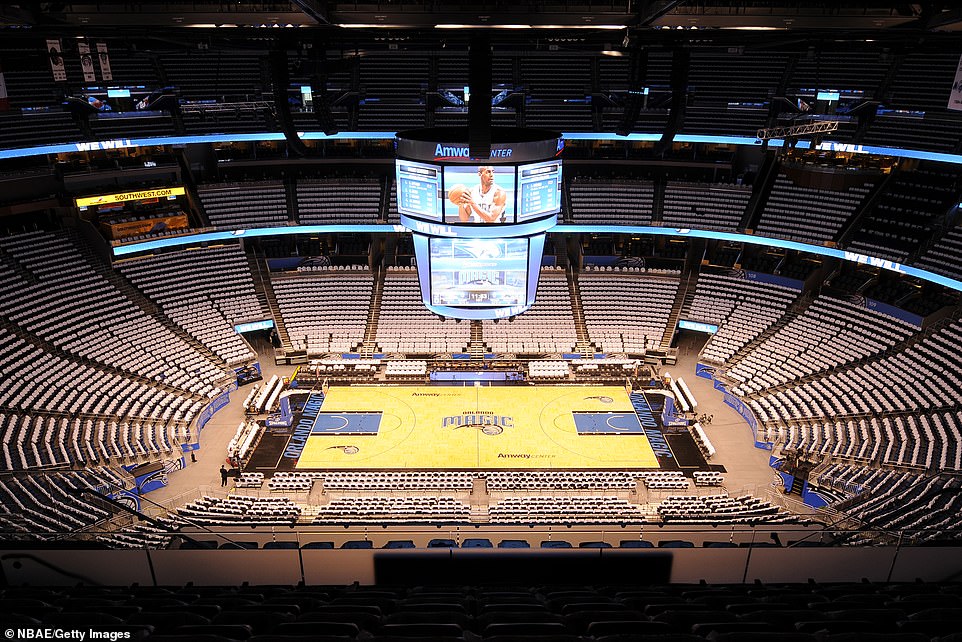 Trump will speak in the arena where the Orlando Magic play; his campaign might fit more than 20,000 people inside since fans will both fill the seats and pack the standing-room floor

The campaign stresses it will be a packed, fun event.

‘The President’s historic announcement of his second term presidential run has already generated tens of thousands of ticketing requests and will draw an enormous crowd,’ said Michael Glassner, the campaign’s chief operating officer.

‘We’ll have delicious food, live music, big screens, and a great time for all of our guests,’ he said.

His campaign claimed last year that 100,000 people requested tickets for for a Houston rally. While that number was never confirmed, supporters of the president camped outside the arena overnight. The line stretched more than five city blocks.

Trump has been foreshadowing his re-election campaign for more than a year by teasing the possibility of a switch away from the Reagan-era ‘Make America Great Again’ slogan that catapulted him to the White House.

Tuesday in West Des Moines, Iowa, he polled a Republican fundraiser audience to see if they would prefer replacing it with ‘Keep America Great.’

The novel approach generated far more applause, as it did a week earlier at a central Pennsylvania rally.