‘I just can’t seem to figure out which is worse.’ Trump wants a poll on whether The New York Times or Washington Post is more ‘fake news’ and claims BOTH will be out of business after he leaves the White House

President Donald Trump called for a poll to be conducted on whether the New York Times or Washington Post are a bigger ‘disgrace’ to the U.S.

The president, who claims ‘phony’ polls have been circulated by the ‘fake news’ to discredit his successes as president, wants to find out which mainstream media outlet is more the ‘enemy of the people.’

‘A poll should be done on which is the more dishonest and deceitful newspaper, the Failing New York Times or the Amazon (lobbyist) Washington Post!’ Trump tweeted as a flurry of new polls were released Sunday morning.

‘They are both a disgrace to our Country, the Enemy of the People, but I just can’t seem to figure out which is worse?’ he continued in the pair of tweets. 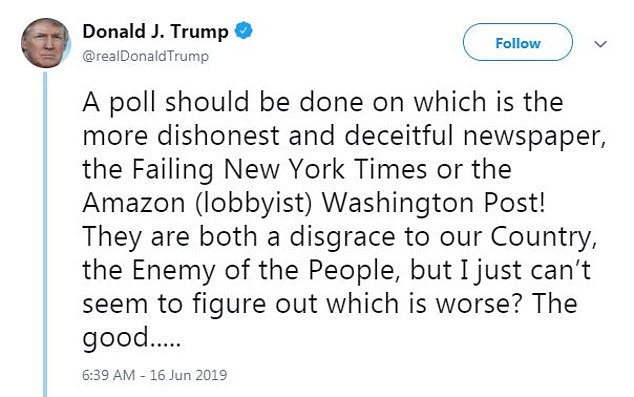 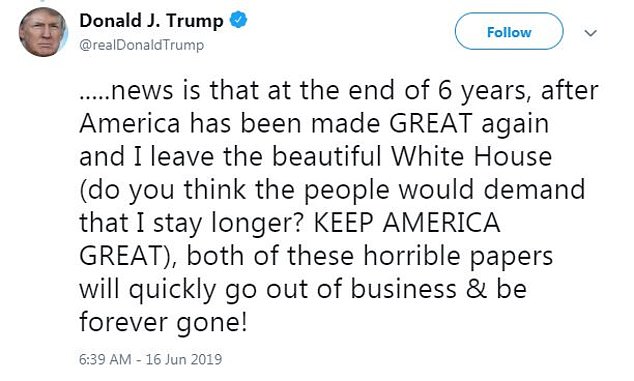 Trump, who is more than halfway through his term, said after he leaves the White House – which he claims will be after a second term – both the Times and Post will go out of business.

‘The good news is that at the end of 6 years, after America has been made GREAT again and I leave the beautiful White House (do you think the people would demand that I stay longer? KEEP AMERICA GREAT), both of these horrible papers will quickly go out of business & be forever gone!’ he concluded.

Trump has issued attacks on the Times, Post and several other outlets since campaigning for 2016. He claims such media companies are ‘dishonest,’ ‘fake’ and even an ‘enemy’ to the public.

The president has also issued personal attacks on journalists, especially those covering him in the White House. 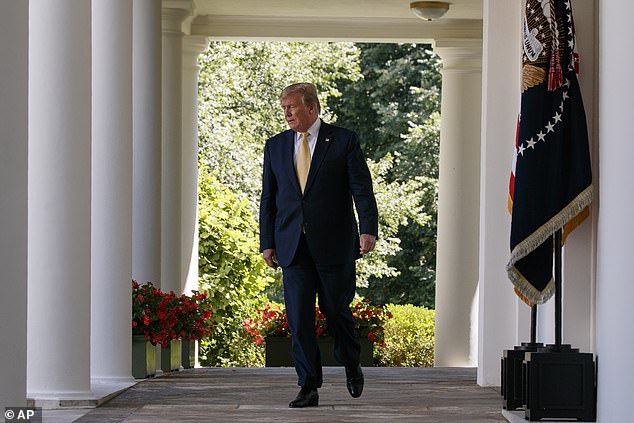 On Sunday morning, several polls unfavorable to the president were published – one with former Vice President Joe Biden leading Trump by 10 percentage points and another indicating support for impeachment is growing among Democrats.

One poll Trump usually trusts is Rasmussen Reports, which tracks the president’s approval rating and has shown him as high as 53 per cent following the release of Special Council Robert Mueller’s Russia report.

Trump has claimed the Russia report and booming economy are grounds for a high approval rating, and laments polls that show otherwise are ‘fake.’