Trump wants staffer who claims he forcibly kissing her be deposed

Alva Johnson, a former staffer on President Donald Trump’s campaign, has alleged in court papers filed in February that the president kissed her without her consent at a 2016 Florida rally.

Now, DailyMail.com has learned that President Trump’s  lawyers have entered a motion to compel Johnson to be deposed on July 8, after ‘repeated suggestions that she might still refuse to appear and/or seek to postpone the deposition.’

Johnson, who is black, alleged in her federal lawsuit that Trump grabbed her hand and leaned in to kiss her on the lips as he left an RV outside a rally in Tampa, Florida, on August 24, 2016.

‘I immediately felt violated because I wasn’t expecting it or wanting it,’ she told The Washington Post in an interview. ‘I can still see his lips coming straight for my face.’

The 43-year-old said she turned her head and the kiss landed on the side of her mouth. She called it ‘super-creepy and inappropriate.’

Ava Johnson has sued  Donald Trump in federal court claiming that he kissed her without consent when she was working for his presidential campaign. Now Trump is demanding that she be compelled to give a deposition in the Photograph courtesy of Erica Aitken Photography 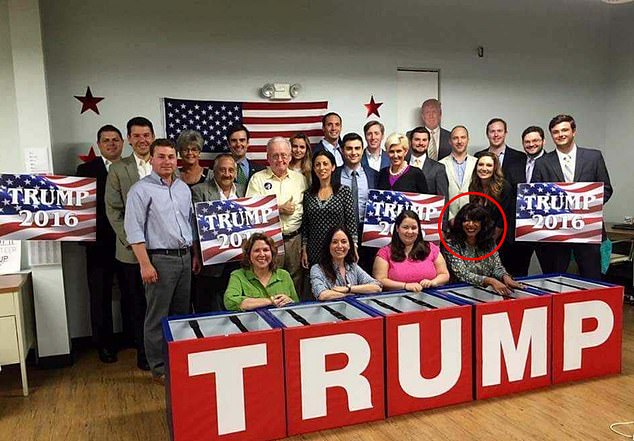 Alva Johnson, circled, is suing Trump claiming that he forced a kiss on her kips during a meeting in Florida in August 2016 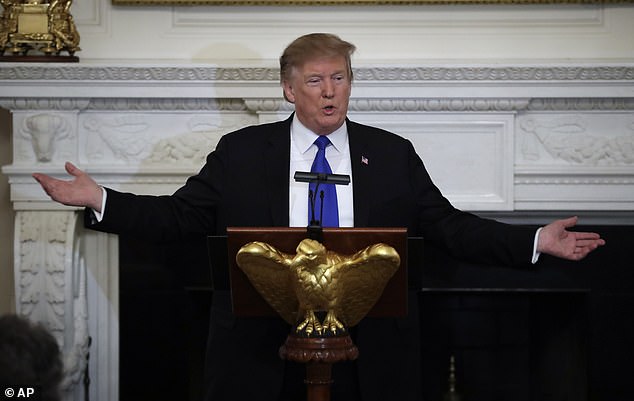 Denial: Trump, seen at the White House Monday, is denying the allegation through press secretary Sarah Huckabee Sanders who called the allegation ‘absurd on its face’

According to the newly filed court papers, the president’s lawyers had requested that Johnson’s deposition be held in June in a city and state of her choosing.

Her lawyers took the position that Johnson was ‘unavailable any day in June due to her professional commitments.

Trump’s lawyers contend one of Jonson’s eight lawyers – not the lead counsel – had a vacation planned and Johnson herself was an events coordinator for a Colorado wines festival at the end of the month.

Johnson’s counsel then refused to produce her for a deposition unless and until the president was deposed.

But Trump’s lawyers want to limit discovery before that deposition is scheduled. Johnson’s lawyers are seeking extensive discovery ‘regarding matters that have nothing to do with plaintiff or her allegations in this case, including accusations against President Trump by 19 other people,’ they write.

Johnson, a mother of four, said she told her boyfriend, mother and stepfather about the incident later that day, which all three confirmed to The Post.

‘I’ve tried to let it go,’ Johnson told the newspaper. ‘You want to move on with your life. I don’t sleep. I wake up at 4 in the morning looking at the news. I feel guilty. The only thing I did was show up for work one day.’

Johnson worked as the campaign’s director of outreach and coalitions in Alabama but was assigned to Florida three months before the general election.

Her job was to manage the RVs that traveled the state as mobile campaign offices.

Her lawsuit outlines her claims as to what happen that day, a rainy August day in Tampa, Fla., after Trump had secured the GOP nomination at the party’s nominating convention.

Johnson brought volunteers into the RV to meet Trump, where he chatted with them, took photos and shook hands. He also sat at a desk and autographed campaign signs.

Johnson said she noticed Trump was ‘watching her and appeared to be trying to make eye contact with her.’

She said when she spoke to him when he left to go the rally site to make his speech.

‘I’ve been on the road for you since March, away from my family,’ she said to him. ‘You’re doing an awesome job. Go in there and kick ass.’

She said Trump took her hand, thanked her for her work and leaned in.

‘Oh, my God, I think he’s going to kiss me,’ she told The Washington Post in her description on the incident. ‘He’s coming straight for my lips. So I turn my head, and he kisses me right on corner of my mouth, still holding my hand the entire time. Then he walks on out.’

In her lawsuit, Johnson claims Trump told her ‘that he would not forget about her, and that he was going to take care of her.’

Johnson said Karen Giorno, director of the Florida campaign, and Pam Bondi, then the Florida attorney general, witnessed the incident but both denied seeing the alleged kiss to The Post.

Giorno said the allegation as ‘ridiculous’ and that it ‘that absolutely did not happen.’

Trump was accused by multiple women of inappropriate contact which took place before the campaign. Many came forward in the closing weeks of the campaign to make the claims.

But Johnson is the first to come forward since he took office and the first to make an accusation of an incident taking place during the campaign.

She filed a federal lawsuit on Monday seeking damages for emotional pain and suffering.

She is also suing for discrimination. Johnson, who is black, claims the campaign paid her less than her white male counterparts. 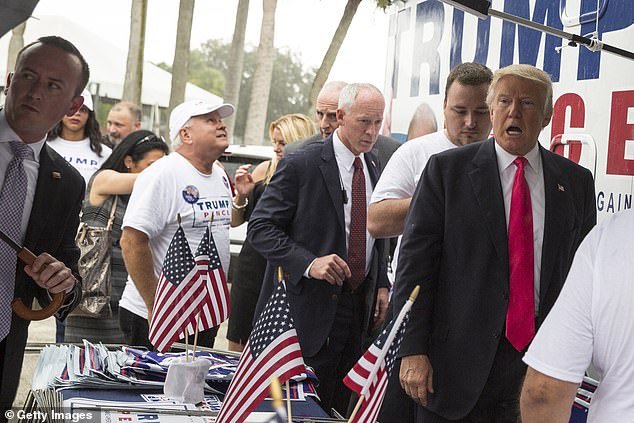 Venue: This is the Tampa, Fla., rally in August 2016 which Alva Johnson says was where Trump forcibly kissed her

In the lawsuit, Johnson alleges: ‘In the moment that Defendant Trump forcibly kissed her, Ms. Johnson, a highly successful and widely respected Campaign staffer, felt reduced to just another object of Defendant Trump’s unwanted sexual attention. Ms. Johnson brings this lawsuit against Defendant Trump for that humiliating violation, which amounts to common law battery, and seeks assistance from the Court to put a stop to his predatory conduct.’

Her suit also claims collective action on behalf of female campaign staffers who were paid less than men.

‘Not only did Ms. Johnson endure forcible kissing by her boss, she experienced race and gender discrimination as one of the few females and one of only a handful of African American people on the Campaign payroll.

‘Ms. Johnson was paid less than white employees, including both staff with similar duties and lower-ranked staff.

‘For this reason, Ms. Johnson seeks to bring this case as a collective action on behalf of female Campaign employees who suffered unlawful pay discrimination,’ the suit reads.’

The New Yorker notes Johnson’s case is at least the sixth in which Trump campaign or administration employees have defied their nondisclosure agreements.

Johnson’s attorney Hassan Zavareei told the magazine: ‘We expect that Trump will try to use the unconscionable N.D.A. and forced arbitration agreement to silence Ms. Johnson. We will fight this strong-arm tactic.’

‘The campaign takes our NDA agreements very seriously, and will enforce them aggressively if they are breached,’ he said.

Johnson told The New Yorker the issues she is raising are big enough to merit breaching the NDA. 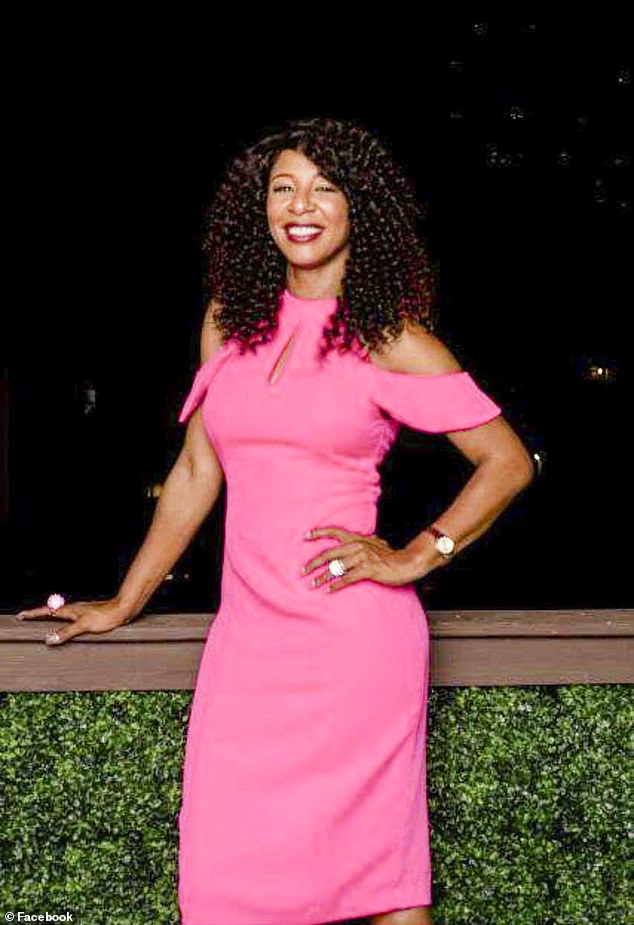 ‘I am suing because my work holds the same value as the work of my white male counterparts,’ she said. ‘I am suing because this predatory behavior should not be minimized, especially when committed by the most powerful man in the world.’

Johnson said she quit the campaign three weeks before the election.

She also said she tried to put the incident behind her and applied for jobs in the administration because she felt she earned it with her campaign work.

She said being passed over for those jobs had no bearing her decision to sue Trump, which she said came about because of the #MeToo movement and her anger at the president’s controversial immigration policy that separated migrant children from their parents.

The Post noted it had first contacted Johnson, who’s an event planner in Madison County, Ala., nearly a year ago while reporting on allegations against Trump.

She declined to talk to the newspaper at the time. But, recently, her attorney offered a copy of the lawsuit and Johnson agreed to an interview.

Johnson, who was a registered Democratic who voted twice for Barack Obama, said she thought Trump would use his business experience to help black communities.

‘During President Obama’s two terms in office, she saw the African American community in Alabama continue to experience severe economic hardship, and felt that perhaps Defendant Trump, with his background in business, could help invigorate the economy and provide jobs for her community,’ the lawsuit reads.

She said her stepfather, Jacob Savage, a retired microbiology professor who has been active in Republican politics, got her interested in Trump’s campaign.

In her suit, Johnson said Chess Bedsole, a family friend who was working for the Trump campaign, interviewed her and told her Trump would have to meet her before she could be hired.

So he took her to meet Trump at a November 2015 rally in Birmingham, Ala., where, she claims, Trump looked her up and down and said: ‘Oh, beautiful, beautiful, fantastic.’