Donald Trump reveals he wants to see Elon Musk’s SpaceX rocket’s first manned takeoff next week in sign of U.S. reopening – then hold G7 at the White House too

President Trump expressed that he was interested in going to Florida next week to watch Elon Musk’s SpaceX rocket blast off with NASA astronauts from American soil for the first time.

‘I’m thinking about going. That will be next week. To the rocket launch. I hope you’re all going to join me,’ he told reporters as he departed the White House for Michigan Thursday. ‘I’d like to put you in the rocket and get rid of you for awhile,’ he told the group.

President Trump said he was thinking of going to the launch next week of the SpaceX rocket and spacecraft, which will be taking American astronauts to the International Space Station 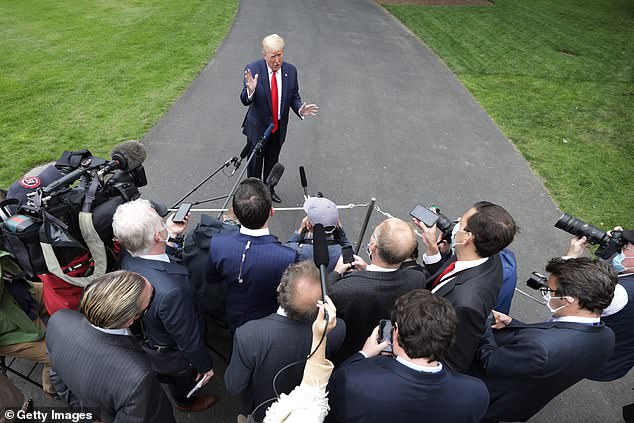 ‘I’d like to put you in the rocket and get rid of you for awhile,’ President Trump told the group of reporters gathered outside the White House Thursday

On Wednesday, as he addressed hospitality industry leaders alongside Florida Gov. Ron DeSantis Pence brought up the trip again.

‘It’s great to be in Florida because I’m going to be back in a week because not too far from here, for the first time in almost 10 years, we’re going to send American astronauts back to space in American rockets from Kennedy Space Center,’ Pence said.

DeSantis indicated that Trump could tag along.

Asked if that was in the works at Wednesday’s briefing, White House press secretary Kayleigh McEnany didn’t have any updates to share.

‘So we have no news on scheduling at that front,’ she said. ‘But if I get news in the future, I will certainly provide that for you.’

The May 27 launch will use SpaceX’s Crew Dragon spacecraft lifting off on a Falcon 9 rocket, also made by SpaceX, the company founded by Musk.

They are traveling to the International Space Station.

As he left the White House Thursday, Trump also discussed what a rescheduled G-7 conference might look like.

On Wednesday, he tweeted that he believed the G-7 conference should be held in-person, despite the coronavirus still spreading around the globe.

‘I am considering rescheduling the G-7, on the same or similar date, in Washington, D.C., at the legendary Camp David,’ he wrote. ‘The other members are also beginning their COMEBACK. It would be a great sign to all – normalization!’

He said Thursday it would ‘probably’ be held at the White House, with some parts taking place at Camp David, the presidential retreat in the Catoctin mountains in Maryland.

‘So if we do the G7, when that all comes together, probably it will be in D.C. at the White House. But there could be a piece of it at Camp David, which is nearby,’ Trump said.