Donald Trump warned Iran on Tuesday that it will ‘have big problems’ if it restarts its nuclear program with or without an agreement providing sanctions relief in exchange for its cooperation.

‘If Iran threatens us in any way, they will pay a price like few countries have ever paid,’ he said at a news conference.

Trump signaled that he would stay in an existing agreement that covers Tehran’s nuclear activities, however, in the face of a promise that Europe will work toward a new deal that addresses his concerns about Syria and ballistic missiles.

His threats followed Tehran’s claims that it could take ‘surprising actions’ and the U.S. would suffer ‘serious consequences’ if the U.S. president fulfills his promise to leave the pact.

The president railed against Barack Obama’s administration for signing onto the accord in the first place as he held court with the Oval Office French President Emmanuel Macron.

Trump said the U.S. was ‘insane’ to send Iran ‘barrels of cash’ as part of the deal he claimed ‘should have never, ever been made.’

Macron talked him down by committing to pursuing a new pact after hours of meetings at the White House with Trump that he said ended in a  ‘common reading’ on what is happening in Syria, where the U.S. and Iran both have boots on the ground.

The U.S. joined France and the U.K. on launching airstrikes against Syrian dictator Bashar al-Assad’s government after his latest chemical weapons attack. The measure brought Trump and Macron even closer, with the leaders speaking to each other on the phone regularly in the weeks since.

‘In the past, sometimes France argued that it was time to take action against chemical weapons, and it was — France was not followed by its allies, including the United States at the time. It is not what happened this time. We decided together what was possible and what was not,’ Macron said at a joint news conference.

As for the Iran nuclear deal, Macon said, ‘I do not know what President Trump will decide…and it’s his responsibility.’

The French president said he would work with regional powers, including Turkey and the Syria-aligned Russia, for now, to forge a new agreement.

‘I believe we can both combine our common views and our differences, because we are not in a vacuum. I always said we should not tear apart the JCPOA and have nothing else.’

Trump told him during the media availability that ‘nobody knows what I’m going to do,’ although he said to his foreign counterpart, ‘you have a pretty good idea.’

The U.S. president said his actions will depend on whether it will be possible to do a new deal with ‘solid foundations’ unlike the crumbling agreement his predecessor left him. At their Oval Office meeting, Macron said U.S. and France must work together to bring stability to the region.

‘The Iran deal is an important issue but we have to take a far broader picture which is security in the overall region,’ he said. ‘What we want to do is to contain Iran an its presence in the region.’

Trump chimed in, having already delivered his own remarks to press to begin their meeting, and tore into Iran.

Trump said the U.S. was not ‘going to allow certain things to happen that are happening,’ pointing specifically to Iran’s ballistic missile testing and its terror financing in Yemen.

The president lit into former Secretary of State John Kerry. Trump said that ‘despite all of the money that we gave them,’  Kerry ‘didn’t want to discuss it because it was too complicated.’

Obama’s administration transferred $1.7 billion to Iran, the first $400 million of which was sent over in pallets of cash, after the deal was brokered. The money resolved a dispute between the U.S. and Iran over a failed 1970s arms deal. Iran paid the U.S. for the weapons but the U.S. cancelled the deal and froze the funds after an uprising.

Trump appeared to be referring to the fact that the first installment of the payment delivered on wooden pallets in foreign currencies order to comply with sanctions the U.S. has on Iran’s banking system. He said later on Tuesday that he also heard that the money was delivered in boxes, as well as barrels.

Trump faces a May 12 deadline to decide whether he will follow through on his threat to rip up the nuclear agreement that the U.S. entered into prior to the payment to Iran.

It is party to the pact with France, Great Britain, Germany, China and Russia.

Iranian President Hassan Rouhani said the U.S. could expect ‘severe consequences’ if Trump moves ahead with plans to pull out.

‘I am telling those in the White House that if they do not live up to their commitments,’ Rouhani proclaimed in a speech, ‘the Iranian government will firmly react.’ 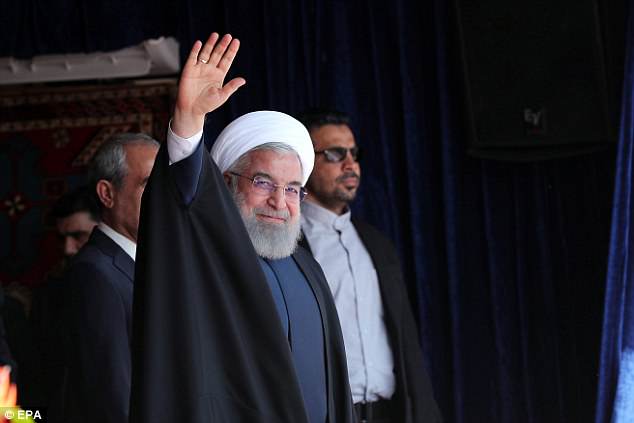 Iranian President Hassan Rouhani said Tuesday that the U.S. could expect ‘severe consequences’ if Trump moves ahead with plans to pull out of the nuclear agreement

Iran loomed large over Macron’s visit to the White House. The French leader was the first to bring it up on Tuesday, mentioning it on the South Lawn in remarks that the U.S. president limited to the United States’ long-standing friendship with the nation’s oldest ally.

He did most of the talking in a joint news conference on the subject, too, after saying in an opening statement that Trump’s views on the topic are well known.

President Trump has said he would be willing to stay in the deal if Europe is willing to toughen it up by addressing the existing sunset clauses and Tehran’s illicit ballistic missile tests. He added Syria to the list of demands on Tuesday.

He told Macron in front of reporters that he was open to ‘doing something’ Iran so long as it is ‘done strongly.’

As the agreement stands, Trump said, ‘It’s insane. It’s ridiculous. It should never have been made.’

A reporter began to inform Trump that Iran says it will resume its nuclear activities if he yanks the U.S. out of it.

As they entered into an expanded meeting with their aides after a brief session alone, Trump was visibly calmer.

‘We’re fairly close to understanding each other,’ he said. ‘Our one on one went very well.’

He told reporters during the news conference that Iran’s presence in Syria was now on the table as part of a new deal, which Macron then agreed to.

‘I would love to get out. I’d love to bring our incredible warriors back home. They’ve done a great job,’ he stated. ‘With that being said, Emmanuel and myself have discussed the fact that we don’t want to give Iran open season to the Mediterranean, especially since we really control it.’

The Iran nuclear deal and Trump’s desire to recall U.S. troops from Syria were sticking points heading into the negotiations with France on Tuesday.

Macron emphasized in a Sunday interview that aired on Fox that the agreement is not ‘perfect’ but there is no ‘Plan B.’

‘I don’t have any Plan B for nuclear against Iran,’ he said. ‘So that’s a question we will discuss, but that’s why I just want to say, on nuclear — let’s present this framework because it’s better than the sort of North Korean type of situation.

Macron said, ‘I’m not satisfied with the situation with Iran. I want to fight against ballistic missiles, I want to contain their influence in the region.’

White House Press Secretary Sarah Sanders rebuffed Macron on Monday, telling American reporters, ‘We certainly think that there should be a better deal, one that actually is positive, that works. And we don’t really typically look to the leadership in Iran to determine what our foreign policy is.’

The French president seemed ready to negotiate by the time he got into the room with Trump, making what was interpreted as an about-face on his ‘Plan B’ comment.

He said at the news conference that the ‘Plan B’ remark in the interview was about climate change, not Iran, and so his position had been mischaracterized.

‘Now, regarding Iran, I’ve always been coherent,’ he insisted.

Macron said he would move forward with small group discussions on an improved deal that includes the four pillars that he and Trump discussed today.