President Donald Trump, first lady Melania Trump and their son Barron were rushed into the White House bunker Friday night after protesters breached one of the barricades outside of the White House complex.

The first family was taken to the underground location around 7 p.m. after multiple people crossed over fences that had been erected to form a barrier around the White House and Treasury Building, The Washington Post reported.

The new details about what happened on Friday night, the first night of protests in the District of Columbia after the death of George Floyd. The large size of the crowd took officials by surprise as hundreds gathered outside the White House, some of them throwing rocks and tugging at police barricades.

Trump was angry after reports he was hiding in the bunker – some said he was in there up to an hour – and said Wednesday he was down there to inspect it.

‘I go down, I’ve gone down two or three times – all for inspection – and you go there, some day you may need it,’ he said Wednesday on Brian Kilmeade’s FOX News Radio show. ‘I went down. I looked at it. It was during the day, it was not a problem.’

He denied he was brought their for safety.

‘It was a false report,’ he told Kilmeade.

President Donald Trump , first lady Melania Trump and their son Barron were rushed into the White House bunker Friday night after protesters breached one of the barricades outside of the White House complex; Trump family is seen together in January on White House lawn 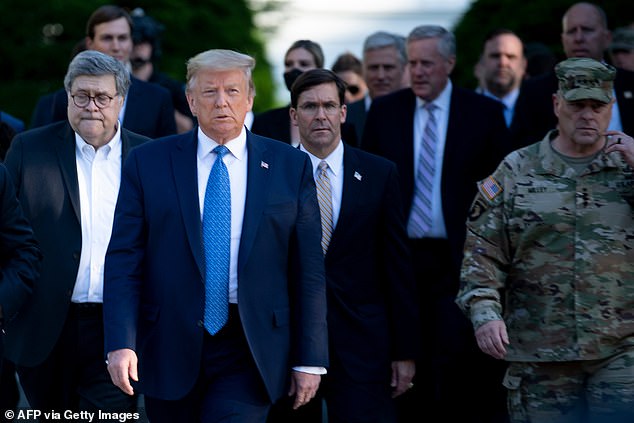 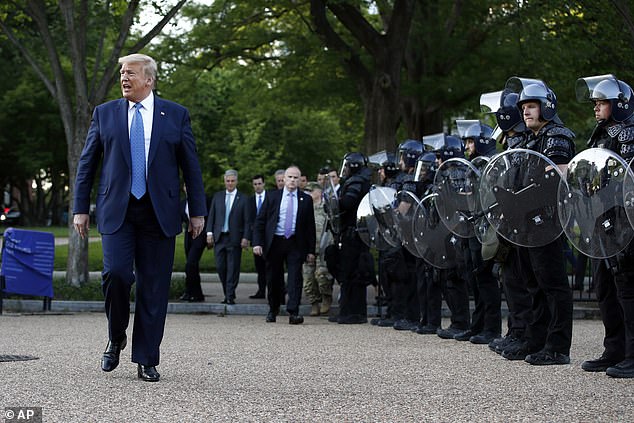 President Trump was said to be furious of images of himself in the bunker and his walk out of the White House Monday to visit St. John’s Church was a response to that

Secret Service agents arrested four people on Friday after the breach, which took place near a Treasury Department fence line about 350 feet from the West Wing.

The Treasury Department sits next to the White House and it’s easy to cross over from one complex to another. Reporters have spotted Treasury Secretary Steven Mnuchin cutting across Treasury’s lawn, through the lower drive way in front of the White House in order to get to the West Wing.

One of the protesters told the Post they didn’t realize what they did triggered a ‘red’ security alert among the Secret Service.

‘I didn’t even realize what I did was illegal,’ said one of the protesters, who spoke to the newspaper on the condition of anonymity because of the pending charges. ‘I stepped over a barricade. I never got onto the Treasury grounds or White House grounds.’

Trump’s s tough crack down on protesters and march to St. John’s Church across from the White House on Monday – where police used gas and rubber bullets to clear peaceful demonstrators from the area to make way for the president – was, in part, a response to reports he was taken to the bunker.

He described his time in the underground room as ‘more for an inspection.’

‘I was there for a tiny, short little period of time,’ he told Kilmeade in a 30 minute interview on Wednesday morning. ‘A whole group of people went with me as an inspecting factor.’

‘They said it would be a good time to go down and take a look because maybe sometime you’re going to need it,’ he noted. ‘I’ve been down – that’d be number two, so two and half sort of, because I’ve done different things, but two and a half.’

The president has defended his short walk across Lafayette Park to visit the historic church, where every president since James Madison has prayed. Religious leaders, Democratic officials and even a few Republicans questioned the level of force used to remove peaceful protesters so the president could have his photo taken in front of St. John’s while holding a bible.

‘President Donald J. Trump made a statement by walking through Lafayette Park to St. John’s Episcopal Church that had been vandalized and partially burned Sunday night. He surprised those following him by holding up a Bible in front of the church,’ Graham wrote in a Facebook post. ‘Thank you President Trump. God and His Word are the only hope for our nation.’

But many church leaders criticized the president for going to stand in front of the church to have his photo taken. He did not read from the bible he carried or inspect damage to the church’s basement.

‘I would have been able to go inside if I wanted to but it was boarded up,’ he told FOX News Radio.

Pat Robertson, the televangelist who founded the Christian Broadcasting Network, also condemned the president’s actions on his show ‘The 700 Club’ on Wednesday.

‘He took the symbols sacred to our tradition and stood in front of a house of prayer in full expectation that would be a celebratory moment,’ she said. 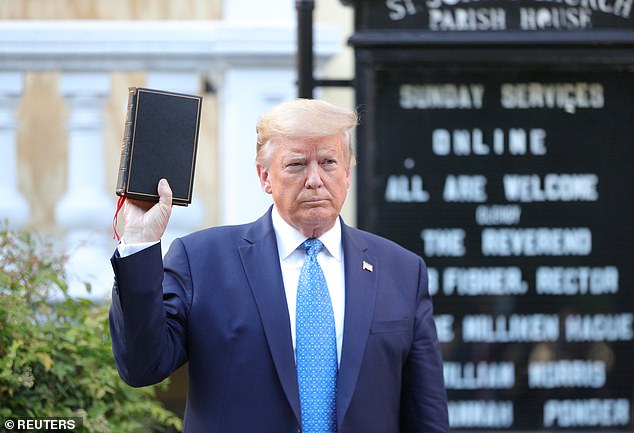 President Trump claimed religious leaders approved of his photo-op in front of St. John’s, holding a bible, but many of them publicly criticized the president

The president also falsely claimed St. John’s burned down. The church’s basement was damaged in a fire over the weekend as protests took place in Washington D.C. in the wake of the death of George Floyd. Trump stood in front of the boarded up church to have his photo taken.

President Trump struggled in his response to the protests that broke out throughout the country and particularly on how to deal with the one in his own backyard.

He continues to push he is doing well with African American voters and that the use of force is the best counter to the demonstrations.

‘As a Republican I’m doing very well with African Americans,’ he said in the Kilmeade interview.

And he pushed that strong image – calling himself the ‘law and order’ president in his Rose Garden address Monday – partially to counter the image of him being placed in the underground bunker as protests took place outside the White House’s front gate.

Officially known as the Presidential Emergency Operations Center, the bunker was built in the early 1940s by then-President Franklin Delano Roosevelt.

At the time, the United States was involved in World War Two.

FDR’s successor, Harry Truman, expanded the PEOC as part of a massive renovation of the White House complex that included a complete demolition and expansion of the structures.

It was rarely – if ever – used by subsequent administrations until the events of September 11, 2001, forced senior officials of the George W. Bush administration into the area for fear that a hijacked airplane was headed for the White House.

Bush was not in Washington, DC, on the day of the attack. 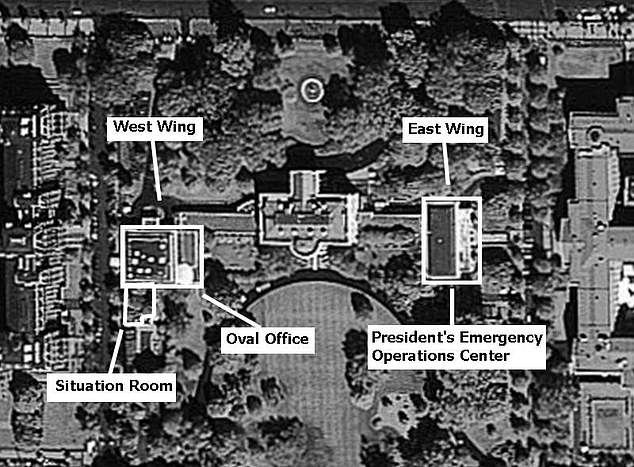 The PEOC was first built during the presidency of Franklin Delano Roosevelt in the early 1940s. At the time, the United States was involved in World War Two 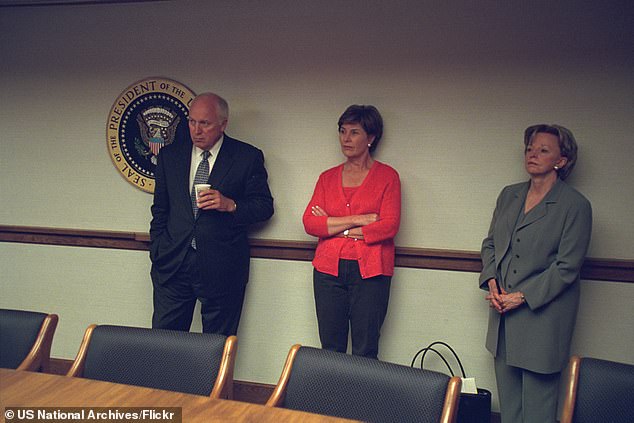 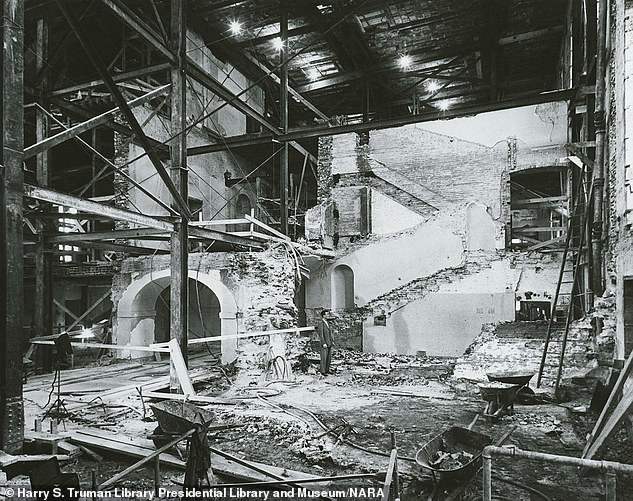 In the late 1940s, when Harry Truman was president, the White House underwent a massive renovation that included large-scale demolitions and an overhaul of the complex. The above image shows the ground floor of the White House as it was being demolished in April 1950 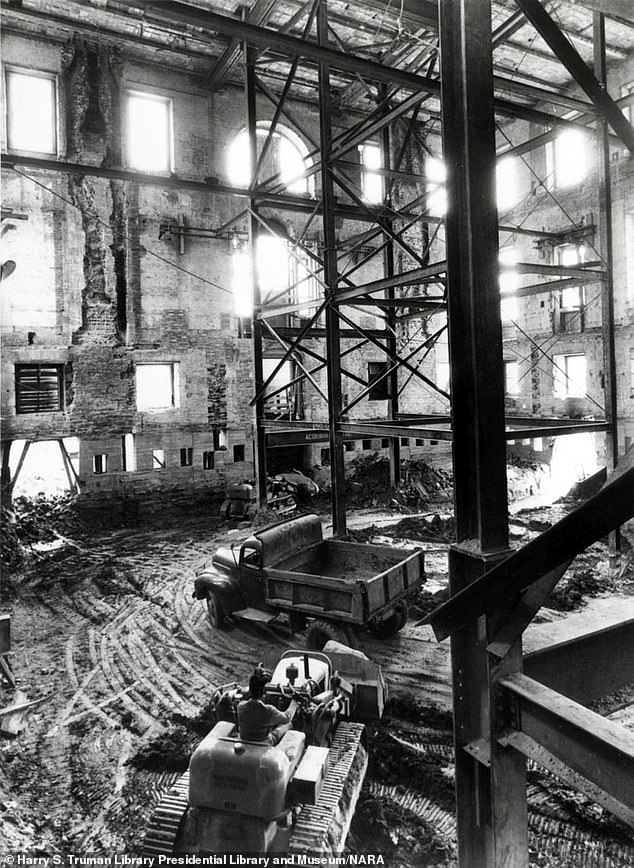 The PEOC was expanded as part of the renovation, though photos of the complex are not available. The above images shows the demolition of the ground floor of the White House in April 1950

But Vice President Dick Cheney, first lady Laura Bush, and other senior aides were quickly whisked to the area that morning.

In her 2010 memoir Spoken from the Heart, Laura Bush recalled the experience of being rushed into the bunker.

‘I was hustled inside and downstairs through a pair of big steel doors that closed behind me with a loud hiss, forming an airtight seal,’ she wrote.

‘I was now in one of the unfinished subterranean hallways underneath the White House, heading for the PEOC, the Presidential Emergency Operations Center, built for President Franklin Roosevelt during World War II.’

In the tense days following the attacks, she and President Bush were awaken in the middle of the night by their Secret Services agents and taken to the bunker. But that threat turned out to be benign.

After September 11, Bush administration officials came to the conclusion that the PEOC was not sufficient to allow the president and his aides to function efficiently during an emergency.

So the White House began a massive project to build another, larger bunker believed to go five stories deep under the North Lawn.

‘After that attack, the national security people recognized that that just is not going to cut it,’ author Ronald Kessler, who wrote a book in 2018 about the Trump White House, told The Washington Post.

Trump, however, was believed to have been taken to the original bunker and not the new, five-story one. 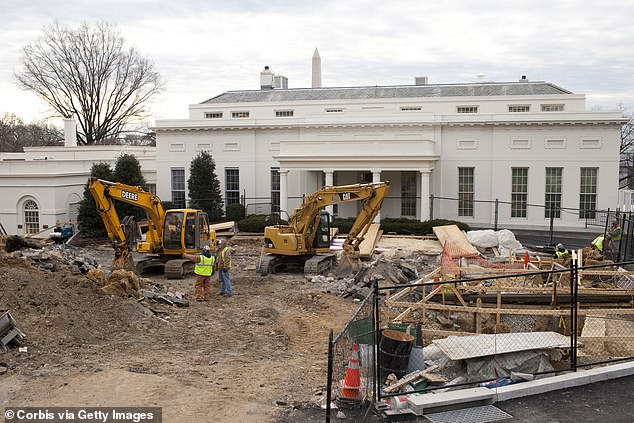 In 2010, massive construction was done near the West Wing of the White House 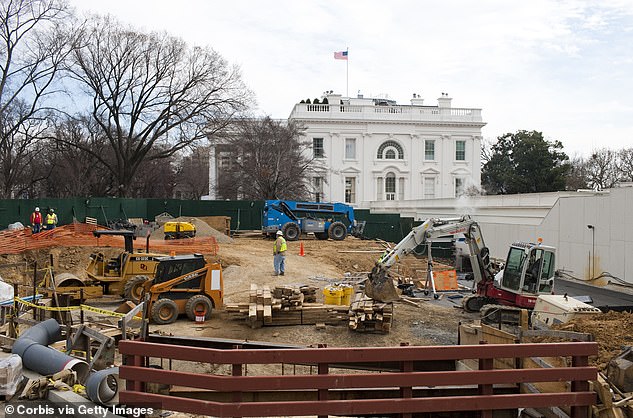 The official explanation given was that existing infrastructure was being replaced, but reports indicate that $375million was spent building a five-story underground bunker below the North Lawn that can sustain the fallout from a nuclear attack

In 2010, the General Services Administration undertook a massive construction project just outside of the West Wing.

The official explanation given by the GSA when reporters asked about the purpose of the construction was that it was done to replace existing infrastructure at the White House.

The construction project – officially a long overdue upgrade of White House utilities – began in September 2010 with the excavation of a huge, multistory pit in front of the West Wing, wrapping around to include West Executive Avenue, the street that separates the White House from the Eisenhower Executive Office Building.

The GSA went to great lengths to keep the work secret, not only putting up the fence around the excavation site but ordering subcontractors not to talk to anyone and to tape over company info on trucks pulling into the White House gates.

‘What it consists of is five stories deep into the ground with its own air supply and food supply,’ Kessler said, noting that few details are known. ‘It is sealed off from the aboveground area so that if there were, for example, a nuclear attack, the radiation would not penetrate into this bunker, which has very thick concrete walls and that sort of thing.’

It cost more than $376 million to build.

Shortly after Trump’s arrival at the White House, he and a select few of his aides were given a tour of the facility.

If the president ever needed to flee the White House, he could go through at least two tunnels. One of them leads to the Treasury Building and an unmarked entrance on H Street.

The other tunnel leads to the South Lawn, where the president can quickly board Marine One.