No sooner than President Trump had secured his first major trade deal, the U.S. leader said he could hold it up for awhile.

Trump told a crowd Thursday that he may wait to move ahead on a deal his administration inked with South Korea until planned nuclear talks with North Korea have concluded.

‘South Korea has been wonderful,’ he said, ‘but we’ll probably hold that deal up for a little while, see how that deal plays out.’

Trump said his thinking had shifted on the matter because the trade deal is a ‘very strong card’ and he wants to make sure that ‘everyone is treated fairly’ in the process.

No sooner than President Trump had secured his first major trade deal, the U.S. leader said he could hold it up for awhile

It was a surprise development after the Trump administration said Tuesday that the United States and South Korea had agreed on revisions to their six-year-old trade pact.

The new deal doubles – to 50,000 – the cars each US automaker can export annually to South Korea, reduces bureaucratic barriers to American products and extends a 25 percent US tariff on South Korean pickup trucks until 2041.

South Korea escapes the new 25 percent tariff on imported steel but must accept quotas on steel shipments to the United States.

The agreement, cobbled together quickly with only a few rounds of negotiations under Trump’s threat of withdrawal, was to include a side-letter that requires South Korea to provide increased transparency of its foreign exchange interventions, with commitments to avoid won devaluations for competitive purposes.

The currency deal, final details of which are still being negotiated between the U.S. Treasury and South Korea’s Ministry of Strategy and Finance, is considered a ‘side letter’ that will not be enforceable with trade sanctions.

Addressing the deal on Thursday at an infrastructure event in Ohio, Trump said, ‘Just this week we secured a wonderful deal with South Korea.

Clinton was a U.S. Secretary of State under the last president. She helped to promote the final version of the agreement before she resigned to run for president opposite of Trump.

Trump said Thursday that the newly-negotiated deal would ‘level the playing field for steel, and cars and trucks coming into this country.’

‘And I may hold it up until after a deal is made with North Korea,’ he said in a surprise twist. ‘You know why? Because it’s a very strong card, and I want to make sure everyone is treated fairly, and we’re moving along very nicely with North Korea.’

President Trump is due to meet with North Korean dictator Kim Jong-un at some point in the next two months after accepting an invitation to negotiate from the hermit leader.

‘We’ll see what happens. Certainly, the rhetoric has calmed down just a little bit, would you say, would you say, and we’ll see how it all turns out,’ Trump told his audience on Thursday. ‘Maybe it will be good, and maybe it won’t, and if its no good, we’re walking, and if it’s good, we’ll embrace it.’ 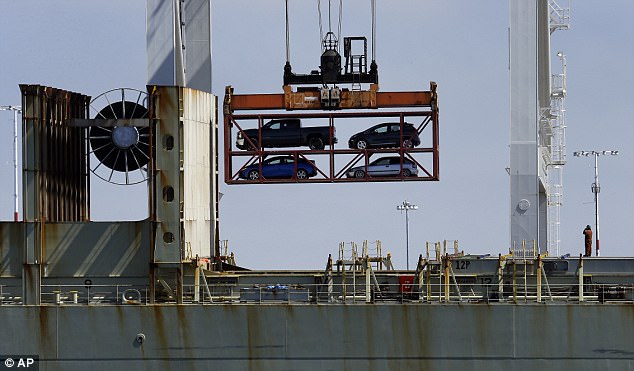 The new deal doubles – to 50,000 – the cars each US automaker can export annually to South Korea. Pictured above is a crane transporting vehicles to a container ship in Oakland 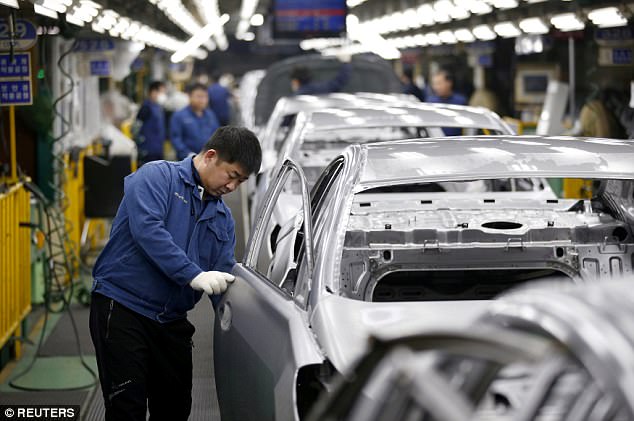 A worker works at an assembly line of Hyundai Motor’s plant in Asan, South Korea on Tuesday

Many U.S. lawmakers, particularly Democrats, had opposed the 2015 Trans-Pacific Partnership trade deal because it had a similar currency manipulation side-agreement that could not be enforced.

Nonetheless, the revised US-South Korean Free Trade Agreement, known as KORUS, would be the first US trade deal in force with a currency side-deal, and would not need congressional approval, the officials said.

Asked whether the forex agreement would ensure that South Korea is not declared a manipulator in the US Treasury’s next currency report due on April 15, the officials declined to comment, saying such assessments would be made in accordance with Treasury’s normal procedures.

South Korea has been kept on a Treasury currency ‘monitoring list’ due to its large global current account surplus and US trade surplus. The Treasury’s October report urged Korea to ‘to enhance the transparency of its exchange rate intervention.’

The officials confirmed that South Korea agreed to cut its steel exports to the United States by about 30 percent in exchange for the rest being excluded from steel tariffs. Korean aluminum producers would still be subject to Trump’s 10 percent tariff on aluminum.

Other countries also must agree to similar quotas to escape tariffs, but the size of the limits would vary. The United States is negotiating with Canada, Mexico, Brazil, the European Union, Australia and Argentina.

One official said it was ‘not a one-size fits all kind of thing’ and added that the South Korean quota was agreed due to its ‘unique’ position in steel exports. South Korea imports and processes significant amounts of Chinese-made steel, much of which is under anti-dumping and anti-subsidy tariffs. 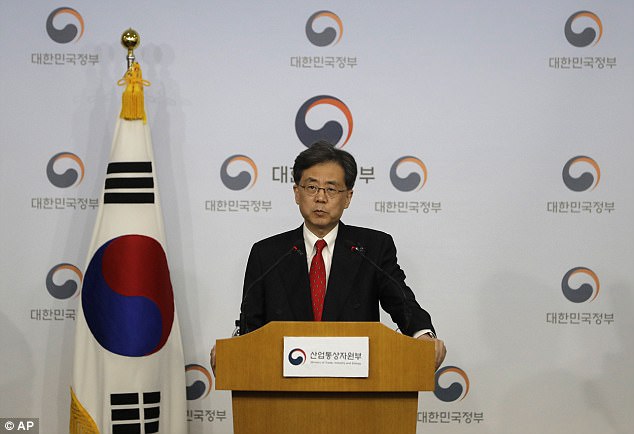 South Korean Trade Minister Kim Hyun-chong listens to a reporter’s question during a briefing at Foreign Ministry in Seoul, South Korea regarding the deal 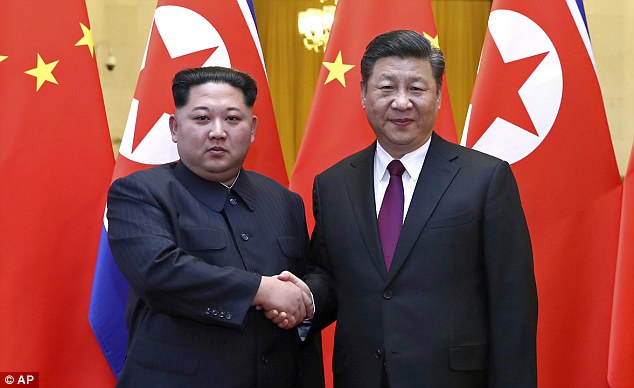 The announcement of the agreement came as Beijing confirmed that North Korean leader Kim Jong Un had visited China to hold talks with President Xi Jinping, in his first foreign visit since taking power

‘What will be the same for any country that is out from under the 232 tariff, like with Korea, there will be a hard quota,’ the official added.

South Korea also agreed to amend a government health program that pays premium prices to domestic drug companies in order to ensure a level playing field for US pharmaceuticals producers, the US officials said.

In addition to the increased access for American vehicles that meet US but not necessarily South Korean safety standards, the US officials also said they won reductions in non-tariff barriers to US vehicle sales, including elimination of duplicate environmental testing requirements and recognition of US replacement parts standards.

Extension of the phase-out period for US pickup truck tariffs to 2041 would ensure that US pickup truck production would not migrate to South Korea as some production moved to Mexico after the North American Free Trade Agreement eliminated the tariff, the officials said.

The announcement of the agreement came as Beijing confirmed that North Korean leader Kim Jong Un had visited China to hold talks with President Xi Jinping, in his first foreign visit since taking power.

During the meeting, Kim committed to denuclearisation in Korea if the United States and the South showed ‘goodwill’, it was reported, with China agreeing to support its neighbor if nuclear tensions could be eased.