The son-in-law of former president Richard Nixon has insisted that Donald Trump will survive impeachment – and go on to win the 2020 election in a ‘small landslide’.

And he insists the embattled president is going to ‘fight right through’, in an interview with New York Post.

Cox is the son-in-law of former President Richard Nixon, who quit as president before an impending impeachment in August 1974.

But he believes that Donald Trump will survive efforts by the Democrat-controlled House to bring articles of impeachment against him.

He says there are several major differences between what Nixon endured in the Watergate scandal to the Ukraine quid pro quo scandal engulfing Trump’s administration.

Cox told the Post that Nixon’s impeachment was ‘in the middle of the worst recession since the Great Depression … and it hit bottom right around August of ’74.’

But he insists the economy under Trump is strong, including record numbers on Wall Street combined with low unemployment figures.

He also says that Nixon didn’t have the backing of either house in Congress during the Watergate scandal.

Under Trump the Republicans hold the majority in the Senate, and it is they who would ultimately vote over whether or not to remove the president from office. 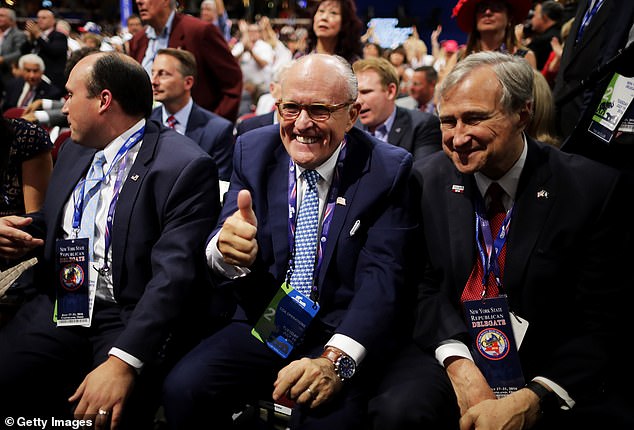 Rudy Giuliani flashes the thumbs-up while New York Republican chairman Ed Cox (right) looks on at Republican National Convention  in July 2016. Cox,  the former son-in-law to President Nixon said in comparison to the impeachment battles: ‘It was much worse then — there were no defenders back then’

Cox said: ‘It was much worse then — there were no defenders back then.

‘There was no back and forth then — he didn’t see it coming. Why should he have? It didn’t happen to Eisenhower. It didn’t happen to FDR,’ He told the New York Post. ‘He was never prepared for thinking that impeachment would be used as a political weapon as it was back then.’

Investigators in the impeachment inquiry are trying to determine whether Trump held up the aid as an incentive for Ukraine to investigate Joe Biden. The President has steadfastly denied accusations of a quid pro quo.

Cox married Tricia Nixon at a White House ceremony in 1971, a year before her dad would have one of the nation’s biggest landslides in presidential election history.

He would join his father-in-law’s re-election campaign as a surrogate, and had a front row seat as Watergate began to make headlines. 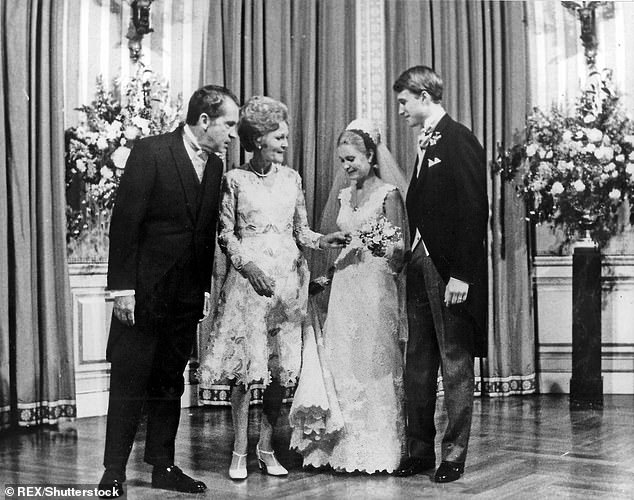 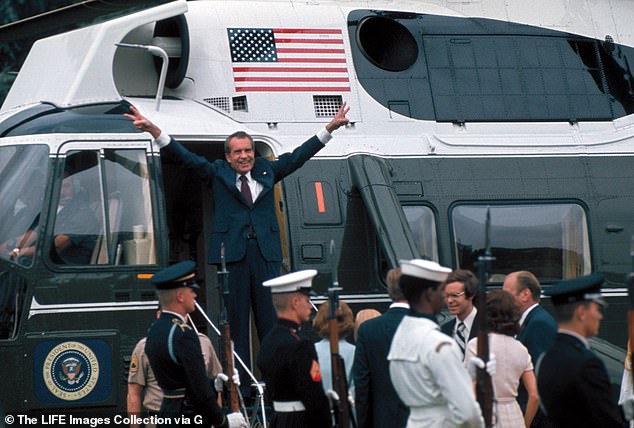 Former President Richard Nixon gives the double-victory salute as he leaves the White House for the final time on August 9, 1974 with mounting calls for his resignation from the Watergate scandal 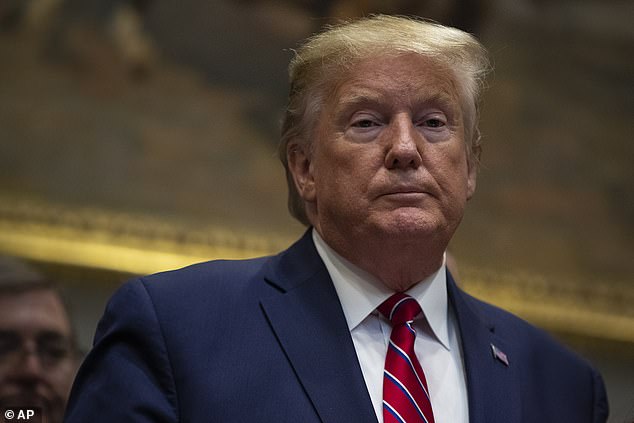 President Trump impeachment inquiry hearings got underway this week, but Ed Cox, the NY Republican party chair and son-in-law to President Nixon said, Trump will fight is way through to an easy 2020 victory

Cox says the whistleblower that started the investigation over Trump’s links to Ukraine is similar to the anonymous Watergate whistleblower who would become known as ‘Deep Throat’.

In 2005, it would be revealed that Deep Throat was deputy director of the FBI Mark Felt.

Cox said: ‘They used [Felt] as this mysterious guy who knew everything. He didn’t know a damn thing.

Cox is so confident that Trump will be victorious in 2020, he predicts a ‘small landslide.’