Trump ‘would have rushed Parkland school without a weapon’

President Donald Trump ripped a group of sheriff’s deputies who waited outside of Marjory Stoneman, claiming that he would have rushed the school if he’d been in their shoes.

‘I really believe I’d run in there even if I didn’t have a weapon,’ the president said, according to the Associated Press.

Trump made the remarks during a White House session with governors.

President Donald Trump ripped a group of sheriff’s deputies who let the Parkland shooter get away on Monday, claiming that he would have rushed the school if he’d been in their shoes 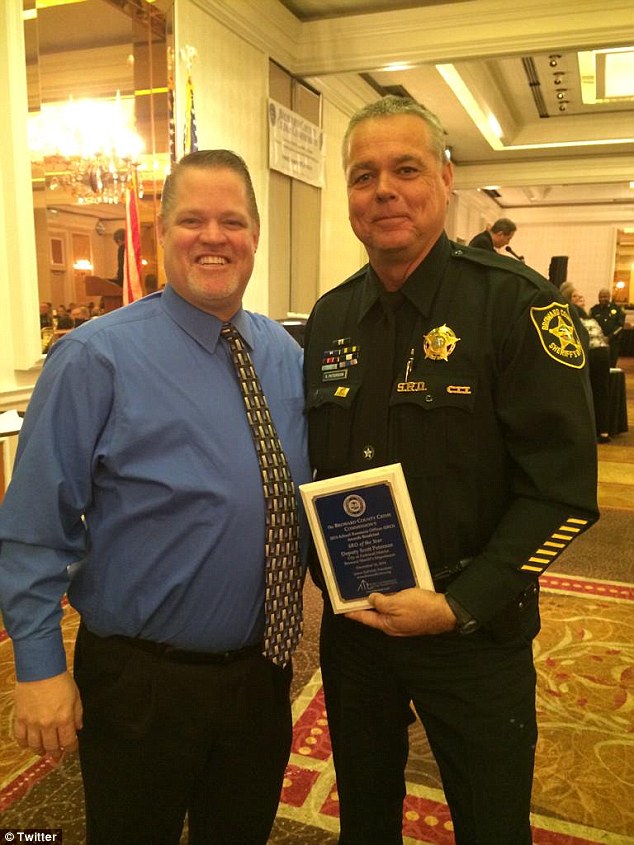 Broward County Sheriff’s Deputy Scot Peterson, the armed school resource officer, was branded a ‘coward’ by President Trump after it emerged he waited outside the building during the recent mass shooting  (above in December 2014 with the principal at Marjory Douglas)

He revealed during the conversation while reporters were in the room that he’d had a secret lunch over the weekend with the CEO of the National Rifle Association.

At the summit, which was still ongoing at 11:30 am, the Associated Press also reported that Washington Governor Jay Inslee confronted Trump about his aggressive social media use.

Trump had branded as a ‘coward’ Broward County Sheriff’s Deputy Scot Peterson, an armed school resource officer who stood outside a school building during the attack instead of confronting the shooter,.

Peterson waited outside the building while 17 students and teachers lost their lives.

Coral Springs police officers revealed later that when they responded to mass casualty they found another three Broward County sheriff’s deputies cowering behind their vehicles, according to CNN.

Not one of the four deputies had entered the school.

Broward Sheriff Scott Israel confirmed at least one of his department’s lapses last week, saying that video footage shows Peterson, the school’s armed response officer and former employee of the month, standing outside the building while a 19-year-old opened fire inside with a rifle.

‘What I saw was a deputy arrive at the west side of Building 12, take up a position and he never went in,’ Israel told reporters, referring to the building on campus, popularly known as the ‘freshman building,’ where authorities said the bulk of the shooting occurred.

Israel said the attack lasted six minutes, and that Peterson arrived at the freshman building about 90 seconds after the first shots were fired, then lingered outside for at least four minutes.

Peterson has not publicly offered an explanation for his inaction.

But Coral Springs Police Department officers Chris Crawford and Sgt. Jeff Heinrich  recounted their own heroics during a news conferenceon Friday, describing the ‘surreal’ events of that fateful Valentine’s Day.