The network found Schiller is performing security consulting on the site selection process for the 2020 Republican National Convention, and was being paid out of the RNC’s convention fund, which CNBC described as a ‘lightly regulated funding stream.’ 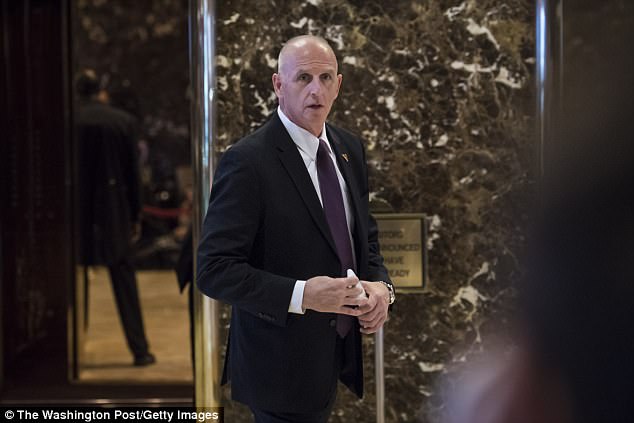 Keith Schiller, seen in the lobby of Trump Tower, has worked for President Trump since 1999 and left the White House in September, only to start getting paid $15,000 a month by the Republican National Committee from October until January

The White House referred NBC News’ questions to the RNC.

In total, Schiller’s firm has made $75,000 from the RNC since October, the month after he left his White House gig.

The most recent payment between the two entities was made on January 31.

With the 2020 Republican National Convention about two and a half years away, CNBC calculated Schiller would bring in more than $500,000 for his work at his going rate.

Stephen Spaulding, a former Federal Election Commission official who is now with the group Common Cause, had no problem labeling the pot of money Schiller was getting paid from as a ‘slush fund.’

‘These sorts of party accounts are notorious for being operated as slush funds – lightly regulated and ripe for abuse,’ Spaulding said to NBC News.

‘Trump’s bodyguard’s firm is getting a fat payout from the RNC and its deep-pocketed donors,’ Spaulding continued.

The former special counsel for the FEC noted that individuals contributors can give $101,900 a year to a political party’s convention account.

CNBC’s report also notes that Schiller is being paid more now than when he was working in the Trump White House, where his annual salary was $165,000 as ‘director of Oval Office operations.’

During the Trump campaign Schiller’s services were worth $10,000 a month.

When it comes to members of Trump’s inner circle, Schiller is a member who has gotten considerably less ink – though been on-hand at important moments.

He was, memorably, the member of Trump’s team who delivered a letter to the FBI last May to inform then Director James Comey that he was fired.

Meanwhile, Comey found out about his ouster from seeing it on TV.

Schiller also told members of the House Intelligence Committee in November that accusations found in the so-called ‘dirty dossier’ were untrue.

‘Oh my God, that’s bulls***,’ Schiller reportedly said when he heard some of the tawdriest allegations contained in the dossier, which was funded by a Republican political opponent, and then Hillary Clinton and the DNC, as opposition research against the now-president.

He testified that while women were offered to Trump while the then-businessman was visiting Moscow for the Miss Universe pageant in 2013, ‘We don’t do that type of stuff,’ Schiller told the gentleman extending the prostitutes.

Schiller had worked for Trump since 1999, first as a part-time bodyguard, and then eventually as his director of security.

‘It pays to be in Donald Trump’s circle of trust,’ Dave Levinthal of the Center for Public Integrity told CNBC. ‘He has a long history of taking good care of people who do his bidding and cutting off those who don’t.’