The United States Golf Association has removed President Donald Trump’s incredible 68 score from their online database after learning that it was posted ‘erroneously’.

The score – which would have been the Commander-in-chief’s best ever – was posted to his Golf Handicap and Information Network (GHIN) account, and referred to a game he played on April 19.

The very impressive number quickly raised eyebrows as it was inconsistent with the scores he usually attains, which are usually in the 70s or 80s.

It appears to be the work of hackers who have gained accessed to the President’s GHIN account and are now posting terrible scores under his name.

Scores of 101, 100, 108 and 102 were uploaded on Friday – however they couldn’t be legitimate as Trump was travelling at the time and unable to get out on the course.

In statement Saturday, the USGA told DailyMail.com: ‘We have become aware of report in the media questioning recent scores posted on President Trump’s GHIN account.

‘As we dug into the data it appears someone has erroneously posted a number of scores on behalf of the GHIN user (Trump). We are taking corrective action to remove the scores and partnering with our allied golf associations and their member clubs to determine the origin of the issue.’

The United States Golf Association has removed President Donald Trump’s incredible 68 score after learning that it was posted ‘erroneously’. Hackers are now posting terrible scores beneath his name

However, the Commander-in-chief has been repeatedly accused of cheating at golf.

Rick Reilly, a former Sports Illustrated columnist who once played a round with Trump, said the President lied about his score, took unwarranted mulligans, and even credited himself for others’ shots.

‘To say “Donald Trump cheats” is like saying “Michael Phelps swims,”‘ Reilly wrote in his book, ‘Commander in Cheat: How Golf Explains Trump.’

Writing for the Sunday Times magazine in March, Riley claimed caddies had given Trump the nickname ‘Pele’ because he would often kick the ball to improve his lie.

Trump, who has faced scrutiny for the amount of time he spends golfing, has previously denied cheating. 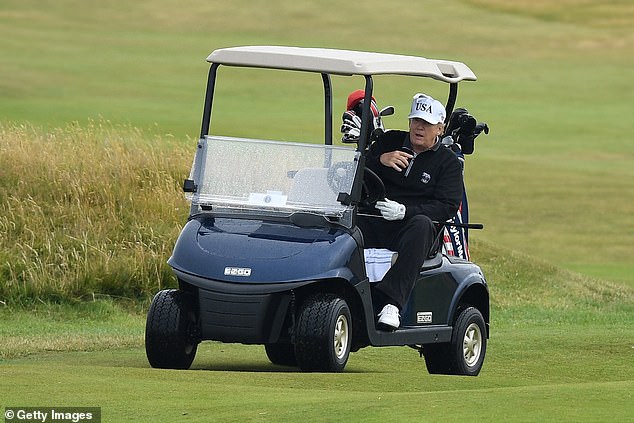 The Commander-in-chief has been repeatedly accused of cheating at golf. He is pictured out on the course in July 2018

Riley also took issue with Trump’s claim at the time that he was a 2.8 handicap, which is actually less impressive than the 1.8 he currently boasts.

‘If Trump is a 2.8, Queen Elizabeth is a pole vaulter,’ wrote Riley.

According to Golf.com, Trump has never submitted a score in the 60s, and Skodnick appeared to poke fun at the President for what he perceived to be a dubious positng.

‘This might be the best round of golf by a head of state since Kim Jong Il’s 38-under par performance (with five aces!) at Pyongyang Golf Course,’ Skodnick wrote on Twitter. 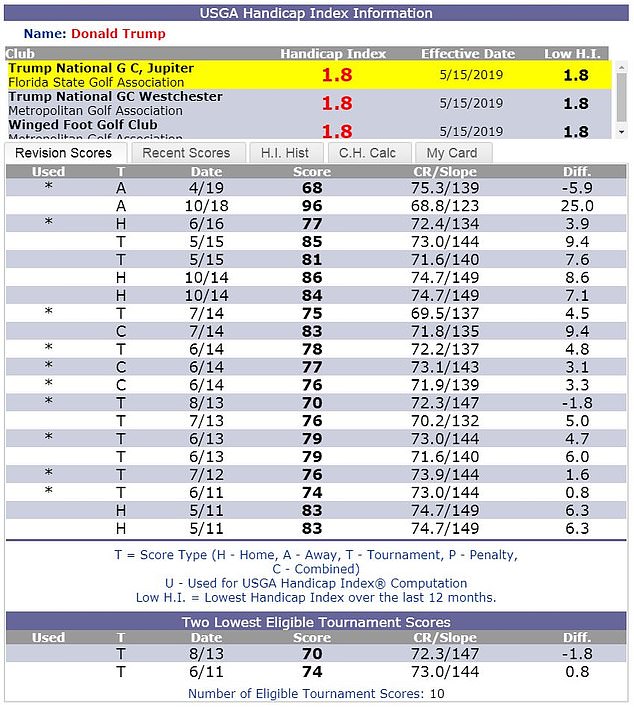