The online platform Trustpilot has issued legal proceedings against a company suspected of posting fake reviews for the first time.

It launched the action against UK-based immigration lawyers Global Migrate, after it detected hundreds of allegedly fake reviews.

The company said Global Migrate, which labels itself as the ‘UK’s most trusted emigration law firm’ on Google, failed to respond to repeated requests to end its soliciting of fake reviews.

Trustpilot plans to issue legal proceedings against a number of repeat offenders, seeking orders to prevent the businesses from continuing to solicit fake reviews and to recover damages.

More than 144million consumer reviews of businesses and products have been posted on Trustpilot, according to the review site

In Global Migrate’s case, Trustpilot’s fraud team found evidence to suggest more than 700 fabricated reviews had been submitted on its profile page.

The company had received multiple warnings from Trustpilot, as well as a formal cease and desist notice, for its involvement in these fake reviews.

A public warning has also been placed on Global Migrate’s Trustpilot profile page, alerting consumers of the business’ apparent misbehaviour.

Many of its more recent reviews are negative with some accusations of poor service and even fraud.

To date, 702 reviews have been removed from Global Migrate’s Trustpilot page – all suspected of being fake.

This is Money contacted Global Migrate for a response, but it has not yet replied. 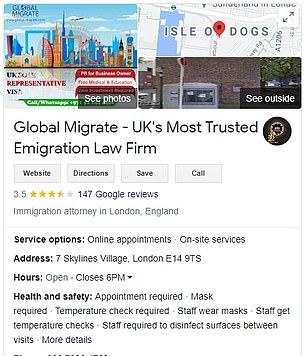 Trustpilot says it is confident it has now removed all the fake reviews from the page.

The immigration and visa consultancy is the first company that Trustpilot has commenced legal proceedings against, but more are expected to follow.

In 2020 alone, the platform removed more than 2.2 million fake reviews from its site, accounting for 5.7 percent of reviews submitted to the platform that year.

Earlier this month, Trustpilot announced plans to announces plans to ‘step up enforcement’ against businesses who repeatedly break the rules by soliciting fake or misleading online reviews.

The platform will issue legal proceedings against repeat offenders, seeking orders to block them from soliciting fake reviews and for recovery of damages.

It said it would donate proceeds from the litigation to organisations which worked to protect consumers from misinformation online.

Improvements in automated fraud, enforcement and anomaly detection technologies, which safeguard the platform from misuse, have also been introduced as Trustpilot attempts to clamp down on companies abusing its platform.

‘We don’t accept this behaviour and will do everything within our power to stamp out businesses who attempt to manipulate or cheat our system. 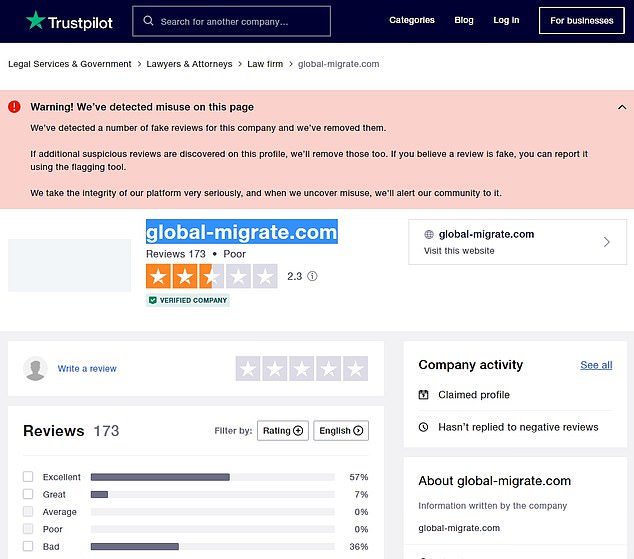 Clampdown: A public warning has been placed on Global Migrate’s Trustpilot profile page

‘Trustpilot exists to build trust between businesses and consumers, which is why our rules are so important.

‘In order to protect consumers and help ensure they are able to shop with confidence, we are increasing our enforcement strategy – it is the right, and necessary, thing to do.’

As part of its fight against fake reviews, Trustpilot has introduced the option for people to verify their identity when posting reviews on the platform.

‘Consumer Verification’ will be available on the Trustpilot platform on an opt-in basis, and will require reviewers to safely and securely share a copy of their government-issued photo ID, as well as take a selfie.

Crucially, people will still retain the option to keep their identity, and any information used to verify themselves, anonymous to both businesses and the public.

Those successfully verified would be published with a verified badge, reassuring other consumers and businesses that the review is written by a real person.

New research by Trustpilot found that 85 per cent of Britons would be willing to prove their identity if it helped to protect others from misinformation on the internet.

The study also found that more than three quarters of Britons believe misinformation and fake news is a significant problem in society, with over two thirds agreeing that the issue makes it harder for them to trust businesses and shop with confidence online.

Jameson added: ‘Reviews offer a vital source of information to let consumers shop with confidence, and this is simply another step we are taking to protect and promote trust online.

‘Many consumers will already be familiar with identity verification processes — for example in online banking, and the process we have introduced to get verified is very easy to do.

‘We should remember how important our opinions and experiences are when we share them online for the good of others.’