Truth about cows: They feel jealousy just like us

THE SECRET LIFE OF COWS

When my family and I first moved from London to rural Herefordshire, we used to be greeted each morning by a genial herd of Limousin bullocks, gazing interestedly at us from the adjoining field.

One of them had a kind of crinkly, ginger top-knot, which reminded the children so much of a friend we’d left behind in the city that we gave him the same name: Derek.

But what I could never have guessed until reading Rosamund Young’s utterly beguiling and exquisitely produced little book was that Derek the bullock had much more in common with our friend than a hairdo.

Young contends that cows are just as varied as people. ‘They can be highly intelligent or slow to understand, vain, considerate, proud, shy or inventive,’ she writes. She should know. For decades, she has poured her heart and soul into running Kite’s Nest Farm, across the border from us in Worcestershire.

It is a business where beef cattle, sheep, pigs and chickens are slaughtered, butchered and sold in the farm shop, yet is the antithesis of an intensive factory-farming operation. ‘All unnecessary confinement and unnatural treatment of animals is indefensible,’ says Young.

And not only ethically, but practically, too. ‘Farm animals that are allowed sufficient freedom can choose healing plants for themselves and stress-free routines that obviate the need for any routine medication.’

At Kite’s Nest, calves stay with their mothers for as long as they choose. All the animals can stay indoors or graze outside; it is up to them.

Moreover, meat, milk and eggs sourced from animals that have been reared responsibly not only taste better, but are better for us. Even William Makepeace Thackeray knew that, 170 years ago.

Young quotes his novel Vanity Fair, in which Lord Steyne notes that ‘a dinner of herbs is often better than a stall-fed ox’.

Nonetheless, Young — along with her brother and her partner, with whom she runs Kite’s Nest — goes a step further than most organic farmers.

All the cattle, whether they are being raised for milk or beef production, are given names.

And what names! Lochinvar, Isadora, Dreamy, Carpet, Woolly Bully, Friendly Wendy, Jane Eyre, Little Dorothy, Peter Bonetti, Mrs Bumble, The Bishop of Gloucester . . . she treats them like the individuals most of us forget they are and, in return, gets an extraordinary insight into their personalities. 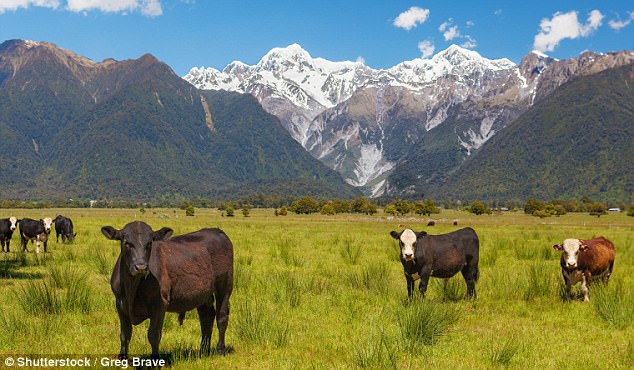 She recalls cow, mother and daughter Stephanie and Olivia who grew apart after Olivia gave birth despite previously being very close (stock image)

Take Stephanie and Olivia, a mother and daughter who were very close, until Olivia herself gave birth, to a bull calf named Orlando. Stephanie grazed nearby, manifestly hoping to be useful.

Grandmothers in the bovine universe, as in the human, are often called on to babysit. But Olivia kept rejecting her mother — until Stephanie’s patience snapped. ‘Hurt and amazed, she turned tail . . . and went off into another field to graze with her erstwhile friends. To the best of my knowledge, they never spoke to each other again.’

Then there was Jake the bull, a sensitive and lovable creature whose only vice was a passion for sniffing carbon monoxide fumes from Land Rover exhaust pipes. And Araminta, who was once so worried about her dangerously bloated son, The Don (named after the great cricketer Don Bradman), that in the dead of night, she kept up a persistent, penetrating mooing so Young would come and see what the problem was.

Young duly rushed out into the pitch blackness, hastily pulling a raincoat over her nightclothes, and got Araminta to guide her to The Don.

She was then able to stick a tube into his stomach and massage his abdomen, until all the trapped air was released. I daresay the expulsion might have been enough to propel a cricket ball high into the night sky. 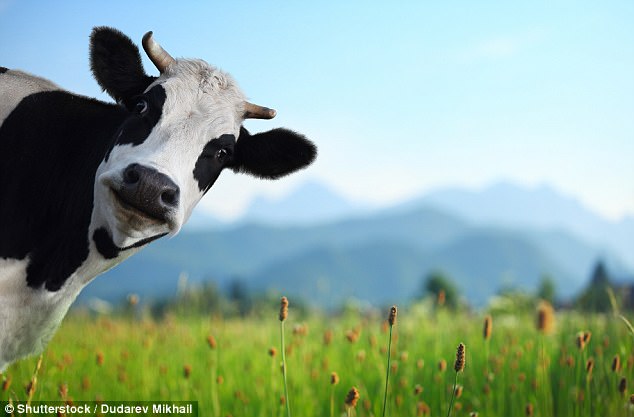 Cricket crops up again, more directly, in a paragraph of such ineffable Englishness, it practically made me want to stand up and sing the National Anthem.

In the late summer of 1966, Young’s parents, from whom she inherited her love of cattle, travelled to the Forest of Dean to collect a two-day-old heifer calf they named Discount.

‘Curled up on the back seat of our blue Ford Cortina, Discount travelled home as good as gold, while my parents listened to the Test match with difficulty on a transistor radio held up to the side window, reporting a very exciting last-wicket stand between, I think, Snow and Higgs.’

What a marvellous image that conjures — one of so many in this charming book. But some are also immensely moving, such as that of Amelia, an unusually delightful cow whose grief after giving birth to dead twins was almost human in its intensity.

More happily, there is the story of a standoffish Charolais called Charlotte, who did not at first take to motherhood. 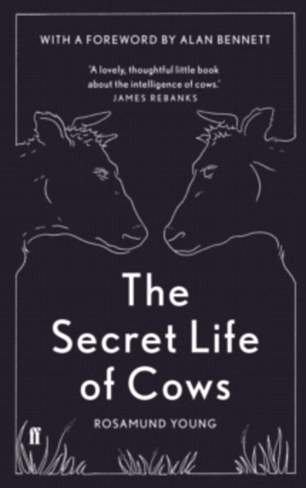 THE SECRET LIFE OF COWS by Rosamund Young (Faber £9.99)

She was adored unconditionally by her strikingly attractive daughter Cocoa, but didn’t return the sentiment, until one day, when Cocoa was just over two months old, she suddenly seemed to notice just what a beauty she had produced.

She then ‘told us in no uncertain terms that she intended to take full credit for her lovely daughter, and from that day on she licked, polished and fed Cocoa single-handedly’.

If that sentence implies Young is some nutty, latter-day Dr Dolittle, whimsically anthropomorphising her animals, nothing could be further from the truth. She is no polemicist, yet her book really is as powerful an indictment of factory farming as anything I’ve read.

‘We do not expect a well-balanced adult to emerge from a neglected, ill-nourished, lonely, frightened child,’ she writes. ‘I believe we should apply the same logic to farm animals.’

Well, amen to that. But The Secret Life Of Cows is not written in a spirit of admonition or piety. It is written with love, and it makes me wish that our bovine neighbour Derek were still around. I think we could have been pals.