How will Thomas Tuchel solve a problem like Romelu Lukaku? The Chelsea boss was frustrated at how much he was asked about his £98m striker in the aftermath of the 2-0 win over Lille on Tuesday night.

Lampooned for a Premier League record low of just seven touches of the ball in 90 minutes against Crystal Palace last Saturday, Tuchel took the forward out of the firing line and left him on the bench against the French side.

A tumultuous week for Lukaku will continue on Sunday with his manager showing his hand and telling us what he really thinks when he names his starting line-up for the Carabao Cup final against Liverpool at Wembley. 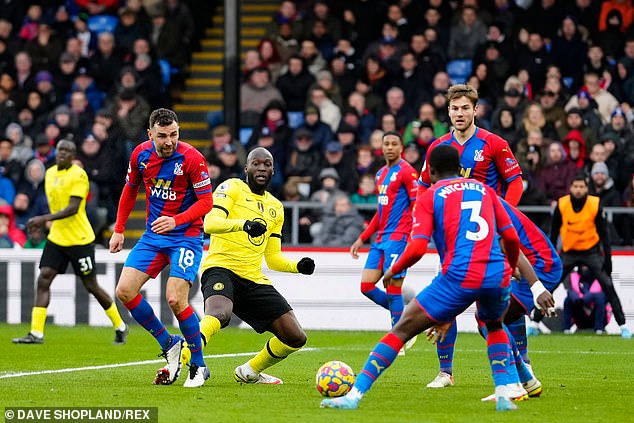 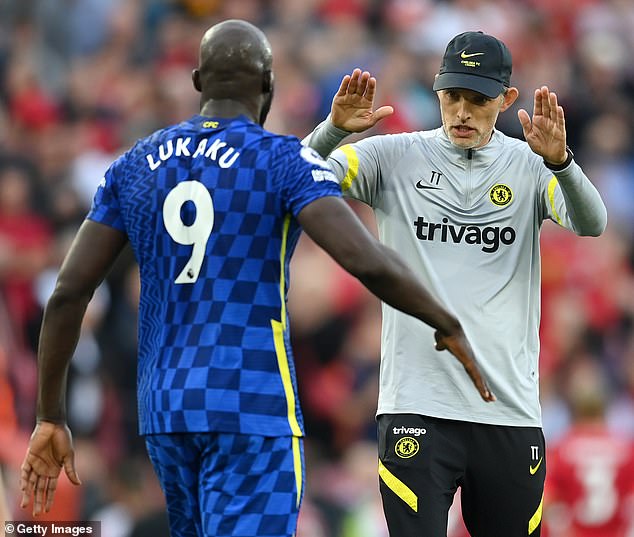 Surely any manager starts his star striker for a match of that magnitude? If Lukaku remains on the bench then it will be hard not to conclude that the writing is on the wall for his long-term future at Chelsea.

The longer Tuchel explained the thinking behind making a Lukaku a sub for Lille, the harder it is to see how he starts against Liverpool.

‘We had a strong win, strong performance and almost every question is about Romelu,’ Tuchel said. ‘It was the moment to take a step back, that was it.

‘The focus is huge. Romelu struggled in the last games a little bit to deliver – that’s what I meant when I said he is a bit tired, not only physically tired but mentally tired.

‘That’s the decision today. For Sunday, we have four days to recover and he has every chance to play.’

It notably isn’t the first time Tuchel has referred to Lukaku being mentally tired. In October, Tuchel used the same reason for explaining the 28-year-old’s run of six games without a goal before for the Champions League tie against Malmo. It took him another four matches before that barren spell was broken.

Lukaku has scored 10 goals in 28 games so far for Chelsea this season – far from a blistering return for almost £100m.

Kai Havertz, who increasingly is becoming Chelsea’s man of the moment when it comes to cup finals, took Lukaku’s place and had eight touches in 15 minutes and scored after just eight. His performance was a compelling case to play ahead of Lukaku at the weekend and his boss was evidently impressed.

‘For Kai I am very pleased,’ Tuchel said. ‘He really steps up in the game – the effort is immense, the work rate is immense, the volume and the areas of the pitch he covers for us is very, very good.

‘He was again decisive. He created chances, was involved and is never shy of defending.’ 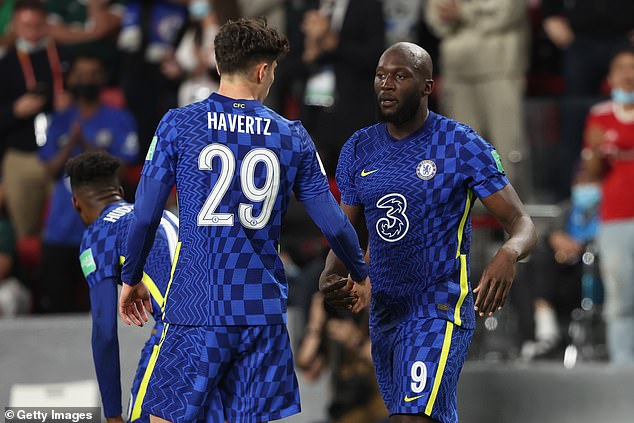 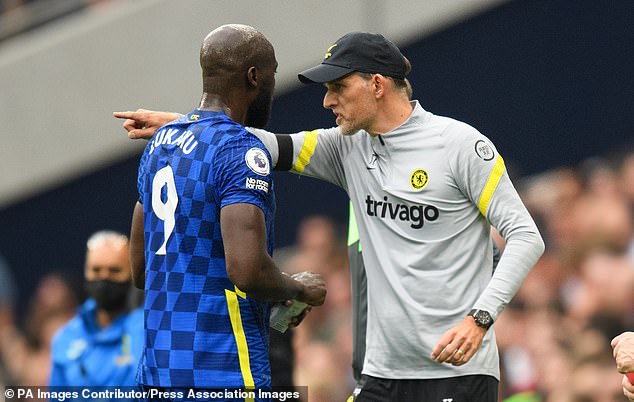 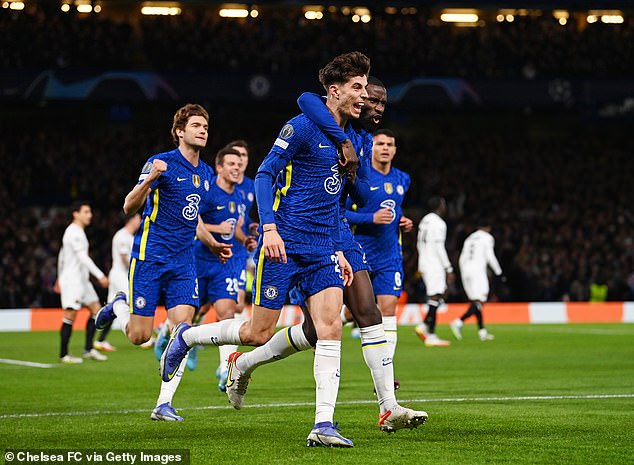 Work rate, covering vast areas of the pitch, tracking back in defence – all attributes that are particularly important to combat Liverpool. They aren’t things typically associated with Lukaku, who at his imperious best stays in the final third of the pitch and bullies defenders by combining strength and power. But in recent weeks, he hasn’t looked like he has the belief to trouble someone like Virgil van Dijk.

Lukaku has grumbled about the way Chelsea set up and what is expected of him before, in that infamous Sky Sports Italy interview.

And what’s more is that alongside Havertz, attacking winger Christian Pulisic also impressed, scoring the other goal on the night as Chelsea took command of their last-16 tie.

The United States attacker has found it hard to retain his highest level on a consistent basis due to injuries but he showed his finer side against Lille and will be well in contention to start against Liverpool.

‘There’s four or five players for Chelsea who can play in the two positions behind the striker,’ Jamie Carragher, in his post-match remarks after Chelsea’s win, told CBS Sports. 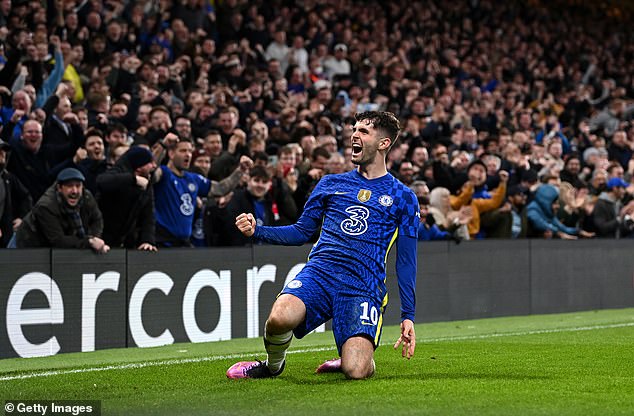 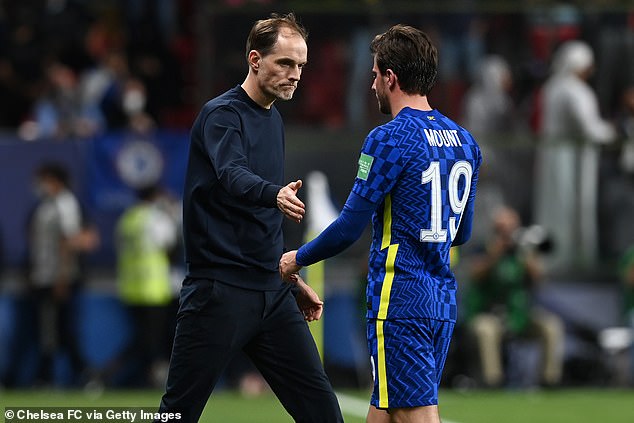 ‘Technically, and moving with the ball, he’s the best player I’ve seen quality-wise. I just don’t see it enough. And a lot of that, to be fair, is to do with his injury record. That is something that has to improve. I think he should be almost a certain starter in that position behind the main striker.’

Mason Mount is coming back into contention after sustaining an ankle issue in the Club World Cup but there are doubts over Hakim Ziyech, who was forced off injured against Lille.

The 23-year-old is imperative to Chelsea’s attacking setup and pressing. Some managers may feel it is a risk to start a player in a cup final on his first game back from injury but Mount is that important, it would not be a surprise.

But all eyes will be on where the No 9 shirt falls when the line-ups are announced on Sunday. In fairness to Tuchel, resting Lukaku has logic to it aside from his dreadful display at Selhurst Park – he had started the last 11 matches on the spin for Chelsea so some time out was perhaps due. 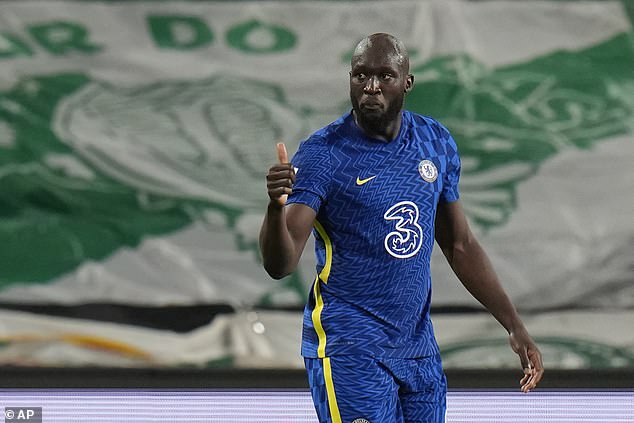 Perhaps throwing him in from the start against Liverpool with a point to prove and a week off could be the perfect recipe for success.

Big decisions have to be made about Lukaku and Chelsea. The first one comes on Sunday.