Tullow Oil is pushing ahead with its growth plans after investing £89.7 million ($118 million) in its two main Ghana fields.

The London-headquartered company has upped its stakes in the Jubilee and TEN fields, to 38.9 per cent and 54.8 per cent respectively.

Tullow Oil is pushing ahead with its growth plans after investing £89.7 million ($118 million) in its two main Ghana fields

Hargreaves Lansdown said the increased ownership at the two fields will increase capital expenditure by £22.8million ($30 million) to £289million ($380 million).

Tullow shares rose 2.5 per cent following the announcement to 502.32p.

Commenting on Tullow’s purchase Laura Hoy, an equity analyst at Hargreaves Lansdown said: ‘Tullow are making good on plans to expand its Ghana operations with an increased stake in two key fields and are taking advantage of buoyant oil prices, aiming to up production and get a larger slice of the growing pie.

‘Given the supply constraints at the moment, things shouldn’t drop off anytime soon and this should help Tullow recoup the cost of the investment, and then some, relatively quickly. However that’s entirely dependent oil prices, so volatility can’t be ruled out.’ 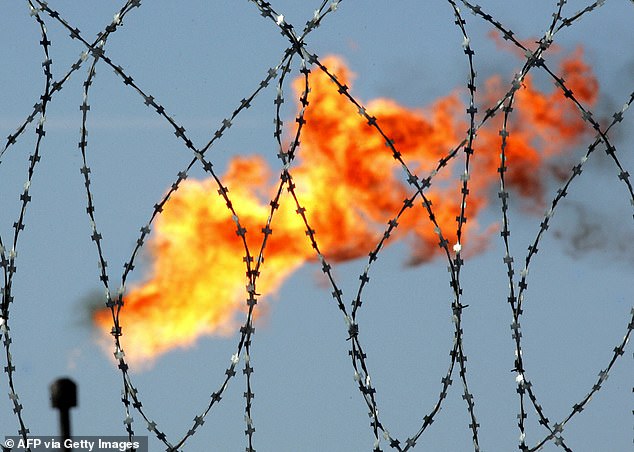 However, Hoy highlighted that Tullow is ‘behind the curve compared to peers’, who are using current conditions to shore up clean energy operations.

She concluded: ‘Tullow risks being stuck clawing its way back to profitability while the rest of the industry marches ahead.’

At the start of the year Tullow’s boss has hailed a ‘year of positive change and transformation’ as it was revealed the firm had managed to slash its debts and cash flow was said exceed previous guidance.

Rahul Dhir said the company was ‘progressing well’ with implementing its decade-long strategy to exploit its West African assets and had seen major improvements in drilling performance, safety and efficiency.

The energy exploration firm said its net debts at the end of 2021 fell to around $2.1billion from $2.4billion the prior year and were about 25 per cent lower than in 2019.

For this current year, the London-listed group anticipates to continue reducing its debt pile as it ramps up capital spending to about $350million, with just under three-quarters of that amount focused on its projects in Ghana.

Outside Ghana, the business forecasts expanding production at the Simba field in Gabon by 40 per cent this year following the successful installation of an offtake pipeline and a drilled infill well.

It has hedged around three-quarters of its anticipated sales volumes up to March 2023, followed by 50 per cent for the subsequent year for output of an estimated 60,000 barrels of oil equivalent per day of between $51 and $78 a barrel.

The value of Brent Crude oil plummeted in early 2020 as coronavirus spread across the globe, a price war between Russia and Saudi Arabia erupted and travel restrictions led to a significant drop-off in demand for petrol.

This sent Tullow Oil to a $1.3billion loss for the first half of that year as it was forced to make a $941million write-off on its exploration assets, mainly those based in Uganda and Kenya, but also its Peruvian Marina-1 well and other assets situated in certain African countries.