There was no clear winner on the second night of the second Democratic debate as fiercely unfriendly fire left White House hopefuls battered and bruised.

Wednesday’s face-off was decidedly less civilized than the night before as all ten candidates came out ready to rip into each other, leaning heavily on their individual records.

The audience also joined in on the onslaught as the debate was interrupted multiple times by protesters.

It was an attack from Tulsi Gabbard that appeared to have the most impact online as the Hawaii congresswoman became the most-searched candidate on Google and topped a Drudge poll with over 42 percent of the vote.

Gabbard’s strong performance peaked when she went head-to-head with Kamala Harris, piling on with complaints about the California senator’s record prosecuting low-level marijuana offenders, keeping convicts locked up beyond their sentences and denying justice to wrongly convicted death row inmates.

‘In the case of those who are on death row – innocent people – you actually blocked evidence from being revealed that would have freed them, until you were forced to do so,’ Gabbard charged.

‘There is no excuse for that. And the people who suffered under your reign as prosecutor? You owe them an apology.’

Gabbard also insisted Harris ‘fought to keep the cash bail system in place that impacts poor people in the worst kind of way.’

The senator said she had opposed the death penalty for the entirety of her career, and that families of crime victims often criticized her for declining to seek capital punishment.

Summing up Gabbard’s performance, CNN Editor-at-Large Chris Cillizza wrote: ‘Gabbard was reasonable but also pointed: She did real damage to Harris on criminal justice reform. She was poised and knowledgeable throughout. And she made the most of the relatively limited talking time she had, using it to talk about her resume – most notably her service in the Iraq War.’ 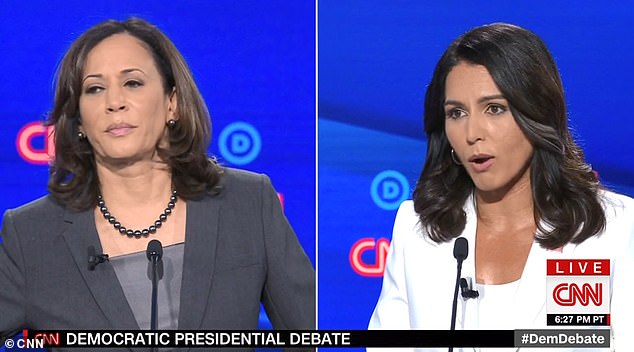 Coming into the debate, all eyes were on Harris and fellow front-runner Joe Biden, whose sparring dominated the stage during last month’s debate.

The former vice president and California senator took up the most speaking time, roughly 20 and 18 minutes respectively, as they spent most of the debate responding to attacks from fellow candidates desperate to knock them off the top.

For the most part pundits have agreed that both Biden and Harris had uneven performances, but their standing in the race is unlikely to shift significantly as a result.

Analyst Bill Palmer listed Harris’ post-debate standing as ‘sideways’, writing: ‘After her strong and soaring performance in the first debate, Harris may have been a victim of high expectations tonight.

‘Her performance was just fine, but it may not be enough to push her higher in the polls.’

Cillizza had Harris in the ‘losers’ column, contending that ‘the California senator learned on Wednesday night how much harder it is to be the target rather than the targeter’ as she weathered attacks from Biden, Gillibrand, Colorado Sen Michael Bennet and, of course, Gabbard.

‘Harris at times effectively parried those attacks, but she didn’t do it enough,’ Cillizza wrote.

Cillizza listed Biden as one of his winners, writing: ‘He was, in places, quite strong – particularly when he was going after Sen. Kamala Harris (California) and Booker (New Jersey).

‘But Biden was much less confident when he was under attack – especially when the topic turned to race and criminal justice reform, though as the frontrunner, he did withstand fire through the entire debate.

‘Biden also struggled in several answers to spit out the right words at the right time. And he continued to stop himself in mid-thought and immediately stop talking when his time ran out.

‘Add it all up and I believe that Biden wound up doing *just* enough to quiet – if not silence – questions about whether he is up to the job. That, plus Harris’ struggles, get the former vice president into the “win” column. Barely.’ 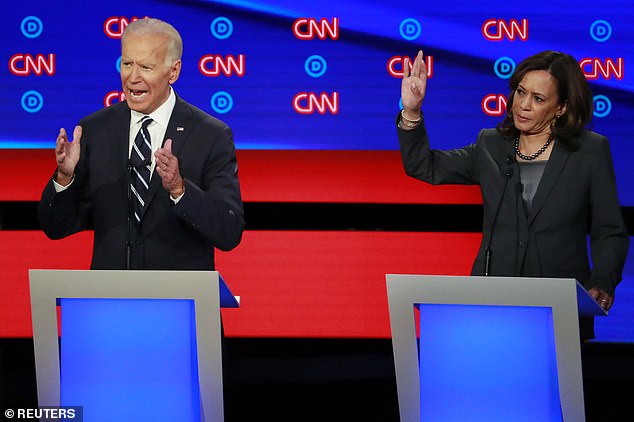 Cory Booker – who came into the debate ranked number six in the polls with less than two percent, per Real Clear Politics – has been widely regarded as one of the night’s biggest winners, masterfully defending against attacks that came his way while delivering plenty of his own devastating blows to others.

Palmer said of Booker: ‘He came off as smart, passionate, warm, and presidential. He didn’t have a perfect night, but this was huge turning point for him.’

Palmer predicted that the New Jersey senator’s poll numbers, which stood below two percent before the debate, will likely triple this week.

Democratic strategist Paul Begala also praised Booker, saying he ‘consistently brought the fight back to Trump, rather than participating in the circular firing squad’.

Cillizza said of the senator: ‘Booker was a happy warrior – balancing attacks (primarily against former Vice President Joe Biden) with an optimistic demeanor.

‘Booker spoke powerfully about criminal justice reform and immigration. And he made a very good point when he noted that Biden was trying to have it both ways when it came to former President Barack Obama – taking credit when it works for him and distancing himself from the Obama legacy when that is more politically convenient.

‘Booker has considerable natural gifts as a candidate – and they shone through on Wednesday night.’ 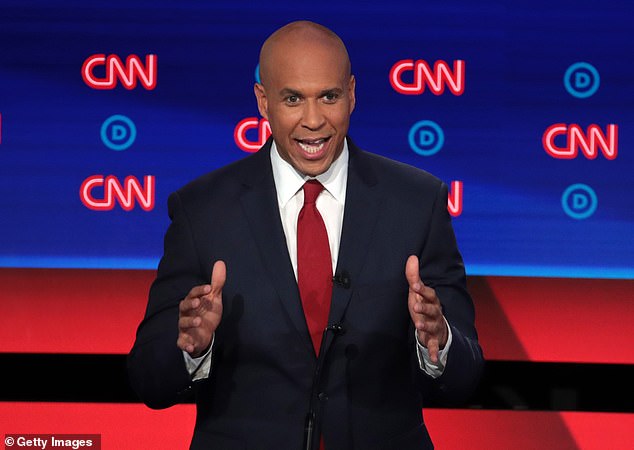 At the losing end of the spectrum was New York City Mayor Bill de Blasio, who took a bad hit early from an unexpected source: the audience.

His final words, ‘I can’t breathe,’ have become a social justice rallying cry in the Big Apple.

De Blasio met the protesters’ anger head-on. ‘I heard you. I saw you. I thank you,’ he tweeted during a commercial break. ‘This is what democracy looks like and no one said it was pretty.’

Over the course of the debate, de Blasio took up the second-smallest amount of speaking time at nine minutes and 42 seconds.

Palmer remarked that the mayor ‘did little with [his stage time] beyond annoying people’.

‘It was difficult to figure out what he was even talking about when he was going head to head with Biden,’ he added. 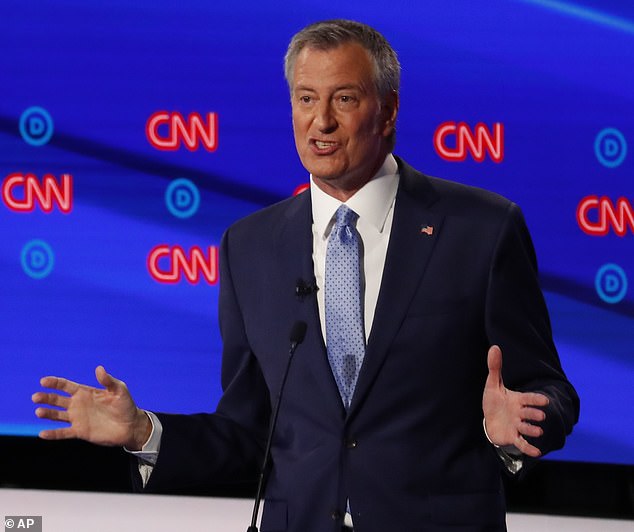 At the losing end of the spectrum was New York City Mayor Bill de Blasio, who was targeted by protesters midway through the opening statements

Entrepreneur Andrew Yang, who came into the debate with the fourth-highest polling numbers out of the ten candidates on stage at roughly two percent, took up the least speaking time (eight minutes and 38 seconds) – but he made the most of that time.

Palmer gave Yang an ‘honorable mention’ on his analysis, writing: ‘There has never been any question about Yang’s intellect. The question has been whether he could translate it to political and social issues. In the first debate, he seemed out of place. Tonight, he impressed.’ 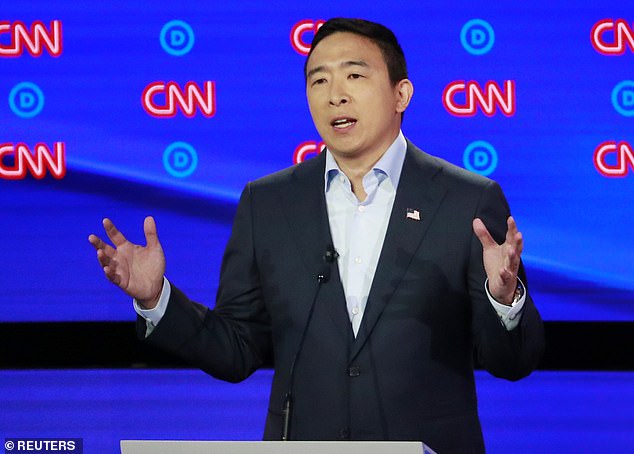 Entrepreneur Andrew Yang, who came into the debate with the fourth-highest polling numbers out of the ten candidates on stage at roughly two percent, took up the least speaking time (eight minutes and 38 seconds) – but he made the most of that time

Former San Antonio mayor and HUD secretary Julián Castro, who was widely regarded as the winner of his first debate last month, stood out once again on Wednesday.

One of his best moments came early when he told Biden: ‘It looks like one of us has learned the lessons of the past and one of us hasn’t.’

He also landed a harsh hit on de Blasio’s handling of Pantaleo.

Cillizza noted that Castro still faces an uphill battle in qualifying for the next two debates in September and October, but said he could ‘really make noise in the race’ if he pulls it off. 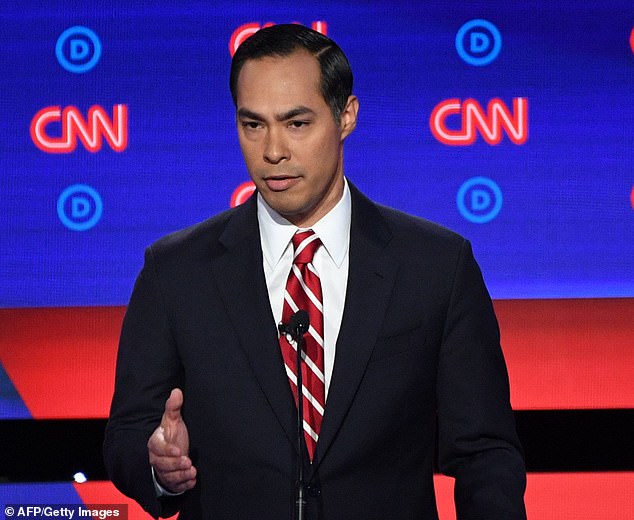 Former San Antonio mayor and HUD secretary Julián Castro, who was widely regarded as the winner of his first debate last month, stood out once again on Wednesday

Another candidate who really needed a strong night was New York Sen. Kristen Gillibrand, who is currently polling at half a percent. Unfortunately, many pundits felt she didn’t manage to pull it off.

Last week, Gillibrand revealed a debate tactic she was hiding up her sleeve during a campaign event in Iowa when she said: ‘We have Democratic candidates running for president right now who do not believe necessarily that it’s a good idea that women work outside the home. No joke.’

It wasn’t long before the media exposed who she was talking about via reports that her campaign team had unearthed an op-ed from the 80s in which Biden expressed concern about the deterioration of the family if a woman was working outside the home.

Cillizza roasted Gillibrand for showing her hand so early and giving Biden ample time to prepare for her inevitably bringing it up at the debate.

‘Biden was completely and totally ready for it – and gave a solid answer, citing his own personal experiences as a single dad and noting that both his deceased wife and his current wife had and have always worked outside the home,’ Cillizza wrote.

‘I’ll never understand why Gillibrand told Biden what she was going to hit him with days in advance. Giant missed opportunity for a candidate who can’t afford one.’

Bennet and Washington Gov Jay Inslee – who both barely qualified for slots on the debate stage – have received little to no mention on pundits’ debate breakdowns, indicating that their performances were fairly forgettable compared to fellow candidates. 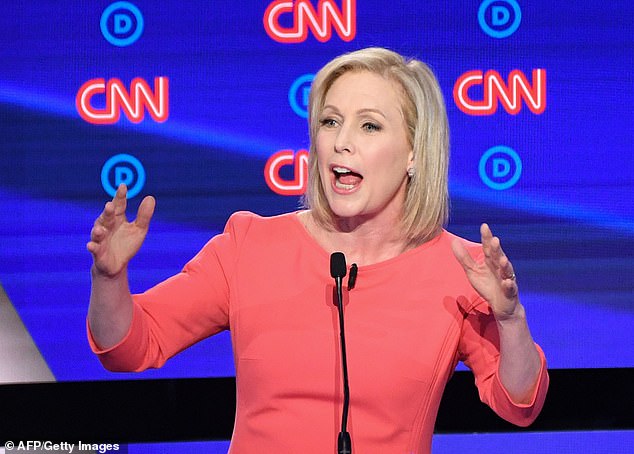 New York Sen. Kristen Gillibrand, who is currently polling at half a percent, came into the night desperate for a breakout performance, but many pundits felt she didn’t manage to pull it off 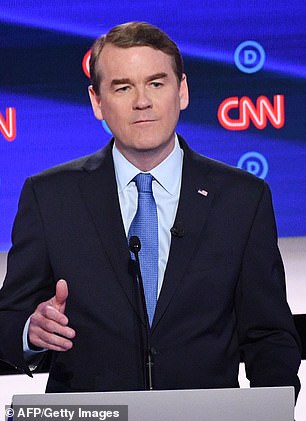 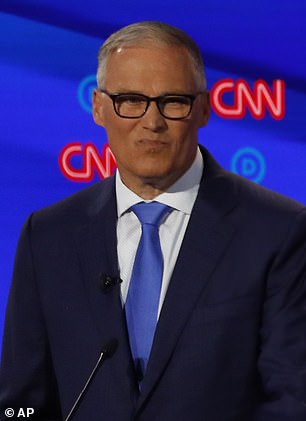 Colorado Sen Michael Bennet (left) and Washington Gov Jay Inslee (right) – who both barely qualified for slots on the debate stage – have received little to no mention on pundits’ debate breakdowns, indicating that their performances were fairly forgettable