A woman has been arrested after an angry note was left demanding paramedics move their ambulance during a 999 call.

The note, which stated ‘I don’t give a sh*t if the whole street collapses’, was put on the ambulance after it left in a resident’s parking bay while paramedics helped a patient.

The note read: ‘If this van is for anyone but No.14 then you have no right to park here.

‘I couldn’t give a s**t if the whole street collapses. Now move your van from outside my house.’

Police today arrested a 26-year-old woman from the Tunstall area on suspicion of a Section 4 Public Order offence. She is currently being questioned.

Chief Inspector John Owen said:’The arrest relates to matters of verbal abuse that could constitute offences under the Public Order Act. This is not solely about the note.’

A force spokesperson added: ‘The incident wasn’t initially reported to us. We decided to take action after seeing details reported on Twitter. The woman remains in police custody and enquiries are on-going.’

Paramedic Katie Tudor, tweeted a photo of the note with the caption: ‘So upset to be sent this by one of our crews this morning! Along with this note left on their ambulance, they received a load of verbal abuse!’

She later added: ‘They weren’t blocking the road, they were in a parking space… just obviously annoying someone that an ambo was outside their property.’

The paramedic, who is based in Stoke-on-Trent, then went on to ask: ‘Is there anything that can be done about this? It’s becoming a regular occurrence.’ 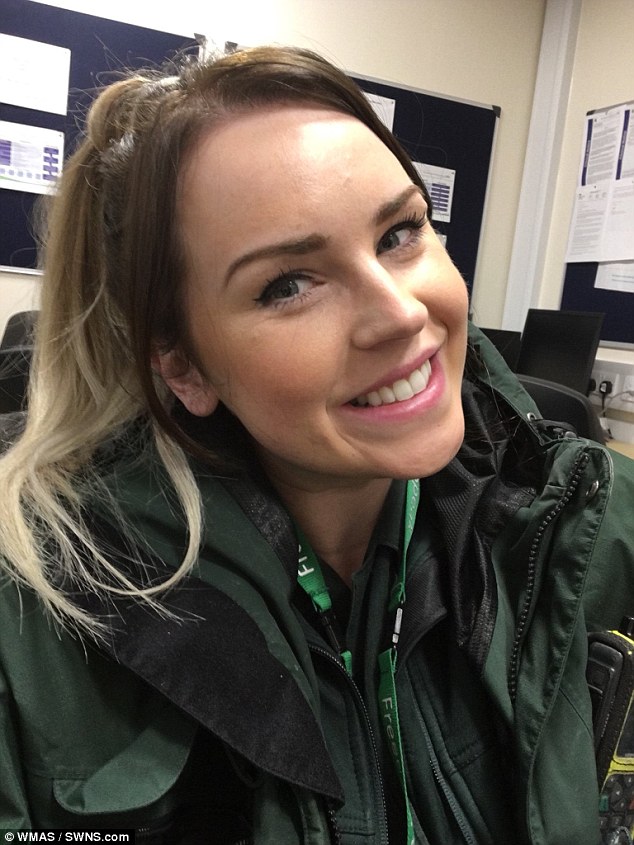 ‘So upset to be sent this’: Paramedic Katie Tudor, tweeted the image of the angry note to highlight the problem of ambulance crew distressed by verbal abuse while attending a call

Nick Adderley, assistant chief constable of Staffordshire Police, responded to her and said: ‘Sadly we have to ‘tolerate’ those in society who only ever think about themselves until such time when they need you/us.

‘Then it’s a different story. Just know that 99.9% of the public really value and appreciate what you/we do.’

Katie replied: ‘Thank you for your comments and I agree, however, I think the crew were most upset by the verbal abuse and distress caused to their patient rather than the note.’

Among a string of subsequent posts from Twitter users criticising the note-writer was one which said: ‘They probably had to write van because they were unable to spell ambulance.’

The team’s official twitter page commented: ‘Unfortunately this appears to be acceptable behaviour in some small minded people’s minds these days #sadtimes.’

He tweeted: ‘Very angry to see yet again people getting grief for doing their job. We don’t block the road for something to do.’ 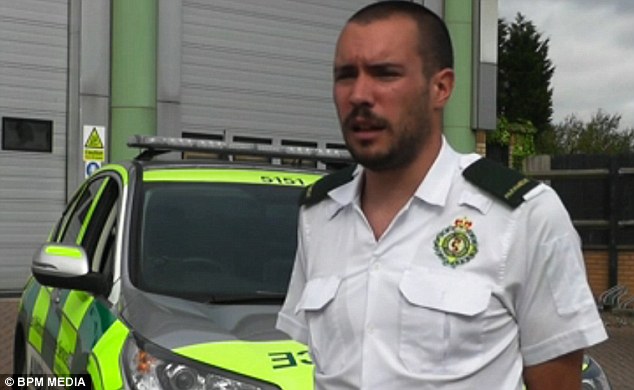 Paramedic operational manager Mike Duggan said ‘people seem to have not respect for the work we’re doing or the fact we’re helping someone. We don’t block roads for the sake of it.’

He told Birmingham Live: ‘People seem to have no respect for the work we’re doing or the fact we’re helping someone.

‘We don’t block roads for the sake of it. We are seeing more and more abuse – this was not an isolated incident.

‘But these people would want our help if it was one of their relatives.

Unfortunately, this isn’t the first time West Midlands Ambulance Service crews have faced abuse before from members of the public.

Last month Ms Tudor took to Twitter to slam ‘angry bystanders’ who shouted at her for blocking a parking space.

She tweeted: ‘Please don’t shout at me for blocking your parking space when I’m trying to coordinate the extrication of a pt in cardiac arrest!!

‘We are desperately trying to save someone’s life and could do without angry bystanders!’ 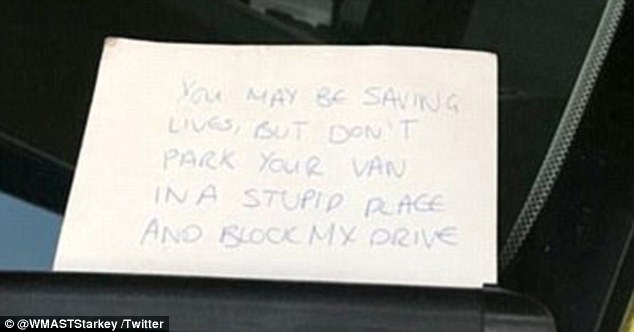 Paramedic Tasha Starkey previously tweeted a picture of this note found on her car reading: ‘You may be saving lives but don’t park your van in a stupid place and block my drive’

A West Midlands Ambulance Service spokesman said at the time: ‘It was incredibly frustrating to hear of our staff getting abuse when they are trying to help a patient in their hour of need.

‘In this particular incident, our staff were trying to save the life of a patient who had suffered a cardiac arrest, the most serious type of call we attend.

‘In our line of work the patient must always come first. Our staff will always endeavour to move out of the way as quickly as possible or park in a clear space in the first instance but the nature of the job means we do sometimes have to park where we block someone in.

‘It is simply not acceptable that staff who are there to help people should suffer abuse from patients, their relatives or others at the scene.’

Last November, another note was left on the windscreen of an ambulance in Small Heath, Birmingham, which read: ‘You may be saving lives but don’t park your van in a stupid place and block my drive’.

Centre manager John Hagans said the man’s family had been made to feel ‘fifty times worse’ after discovering the note had been left on the ambulance sent to help their son.

Mr Hagans said at the time: ‘I have am absolutely disgusted that an individual complained about the ambulance’s parking. An ambulance is a sacred space. What goes on inside there, it shouldn’t be interfered with.’

Teaching assistant Hassan Shabbir Ali, 27, later apologised for writing the note ‘in the heat of the moment’.