Turkish president Recep Tayyip Erdogan has welcomed the planned re-run of an election his party lost, claiming that organised crime was behind the result.

Erdogan said there was ‘corruption and irregularity’ in the vote for Istanbul mayor, which his AKP party lost by a narrow margin in a shock defeat on March 31.

Turkey’s top election body yesterday ordered a new vote in a decision which Erdogan’s opponents called ‘neither democratic nor legitimate’ and which prompted protests in Istanbul a backlash in Europe.

The opposition Republican People’s Party (CHP), which narrowly won the mayor’s office in the country’s largest city, called the ruling a sign of ‘plain dictatorship’. 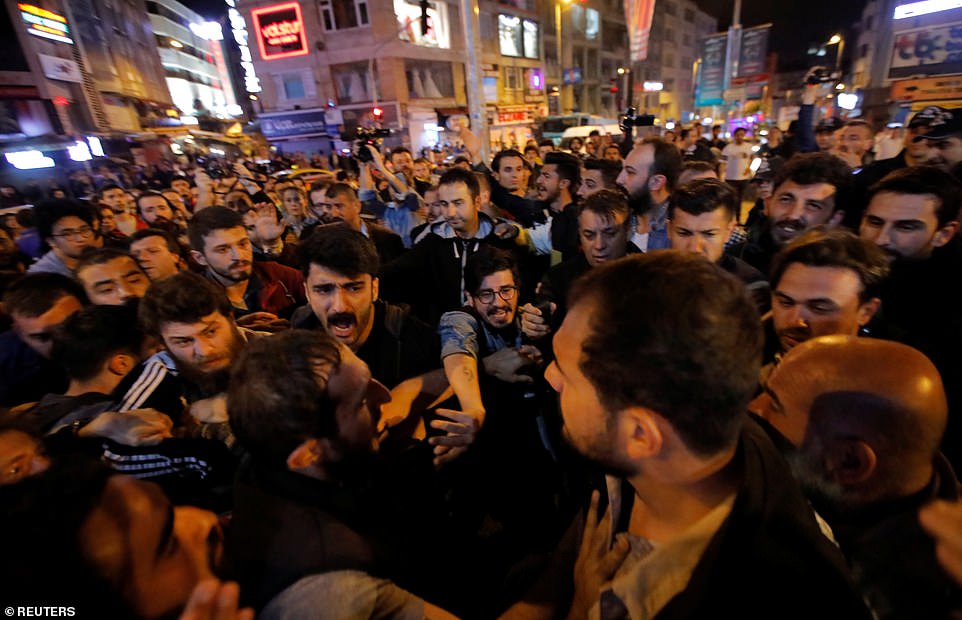 Clash: There were scuffles between plainclothes Turkish police officers and supporters of Ekrem Imamoglu during protests in Istanbul last night 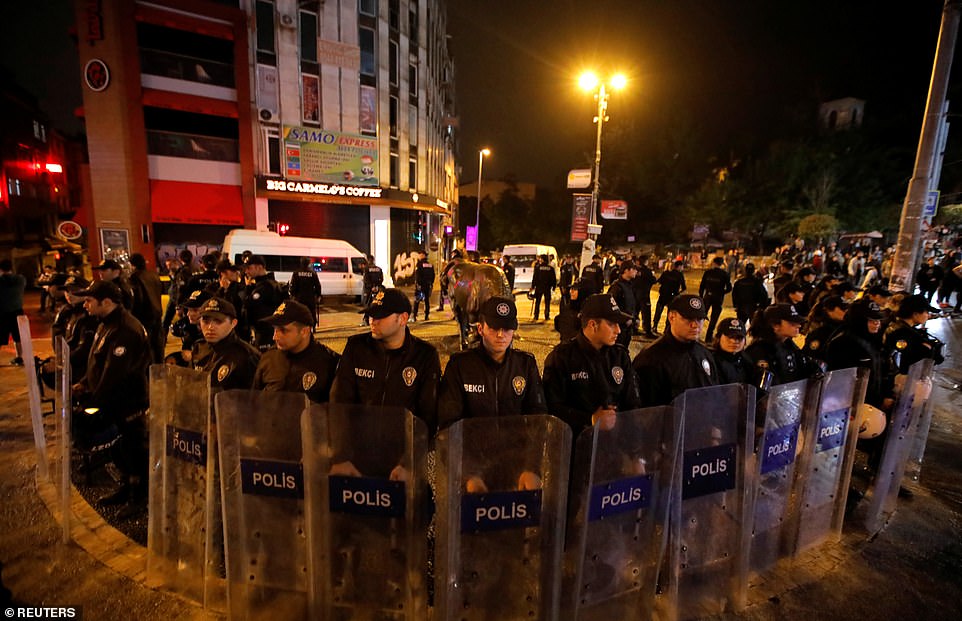 Turkish police were seen standing guard in Kadikoy district during a protest against the High Election Board decision to re-run the mayoral election, in Istanbul 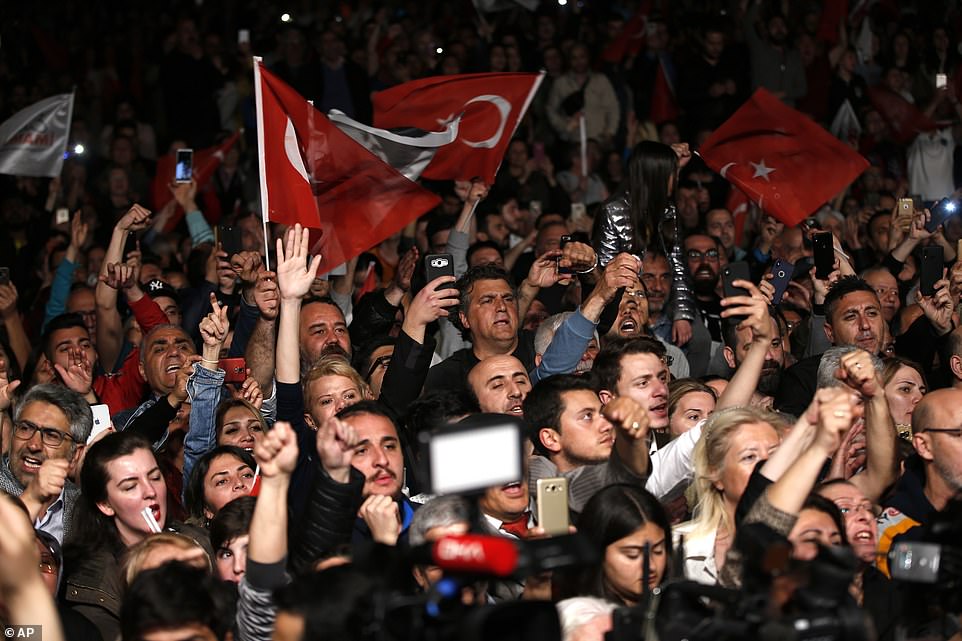 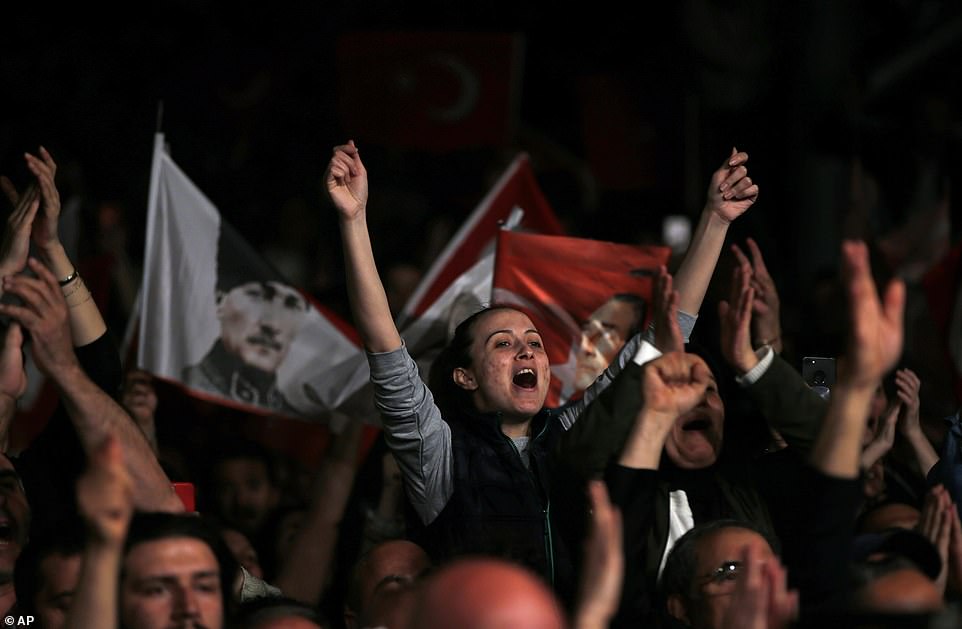 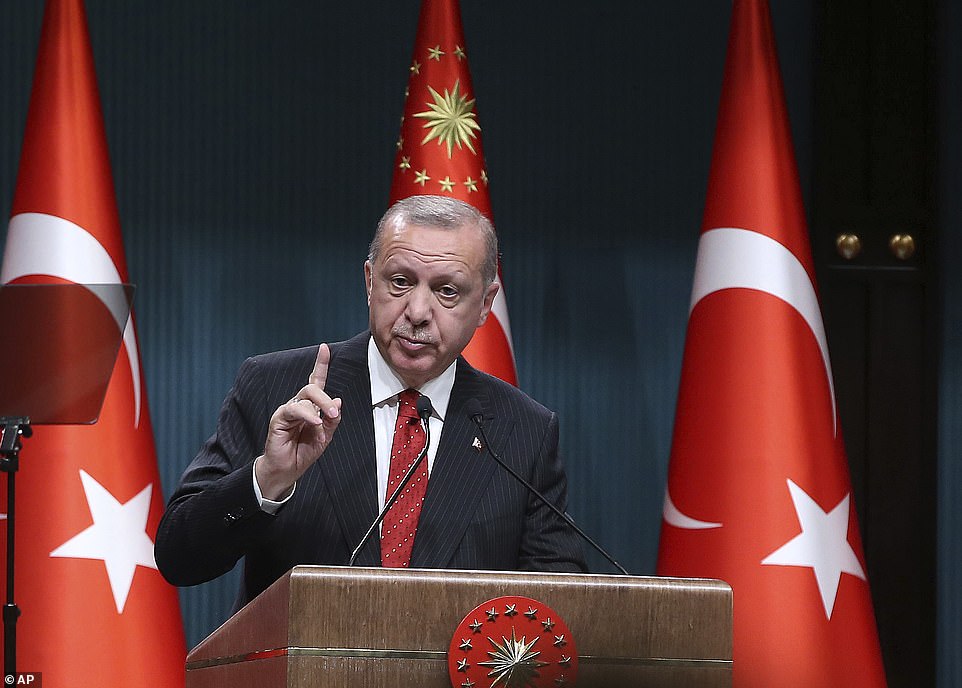 Erdogan speaks during a ceremony at presidential palace, in Ankara on Monday afternoon. Earlier on Monday the High Election Board ruled there should be a rerun of the mayoral elections Erdogan’s party lost 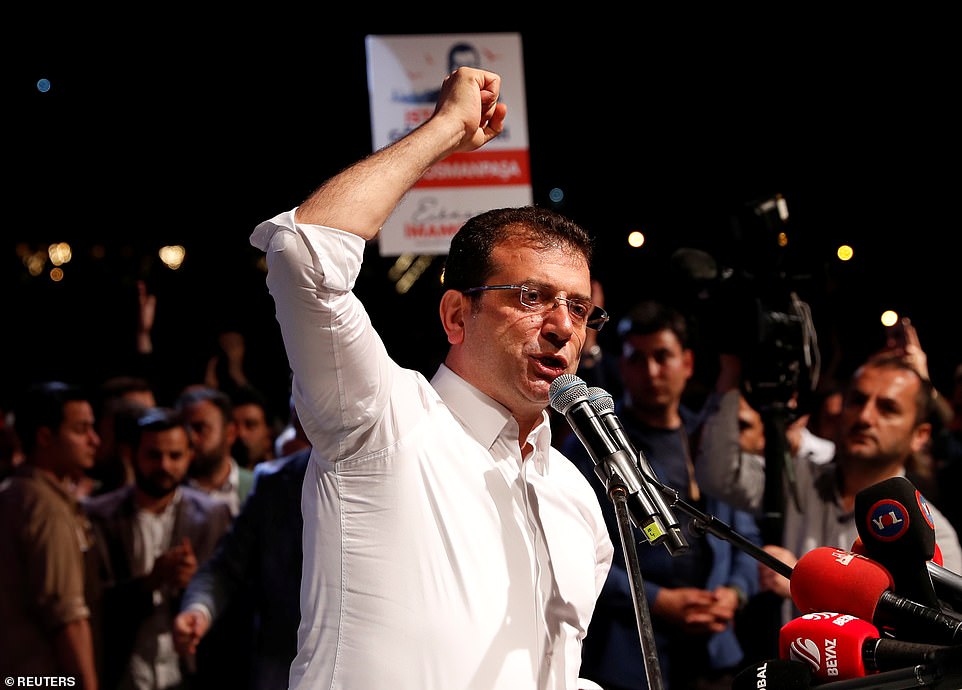 Ekrem Imamoglu, the CHP mayor who officially took office after a smattering of recounts were completed across Istanbul last month, will be removed from his position after the shock decision

‘We sincerely believe there was organised corruption and irregularities,’ Erdogan told party members in parliament on Tuesday, saying the re-run was the ‘best step’ for the country.

The High Election Board had ruled that a fresh Istanbul mayoral contest will be held on June 23.

The AK Party representative on the board, Recep Ozel, said the decision was based on unsigned results documents from the March 31 election and on some ballot box officials not being civil servants.

Kati Piri, the European Parliament’s Turkey rapporteur, said the decision ‘ends the credibility of democratic transition of power through elections’ in the country.

Reuters witnesses said people were banging on pots and pans in protest against the ruling in several Istanbul districts.

The AKP had appealed for an election re-run after initial results and a series of recounts showed it had lost control of Istanbul for the first time in 25 years.

It was a shock loss for Erdogan, who in the 1990s served as the city’s mayor and had campaigned hard ahead of the nationwide local vote, his first electoral test since last year’s sharp currency crisis tipped the Turkish economy into recession.

The Turkish lira weakened and was at 6.1075 against the dollar at 1730 GMT, on track for its worst day in more than a month.

The currency has tumbled more than 10 percent since a week before the initial election. Suspense over the ruling had left investors worried that weeks of additional campaigning would divert funds and attention from addressing economic reforms. 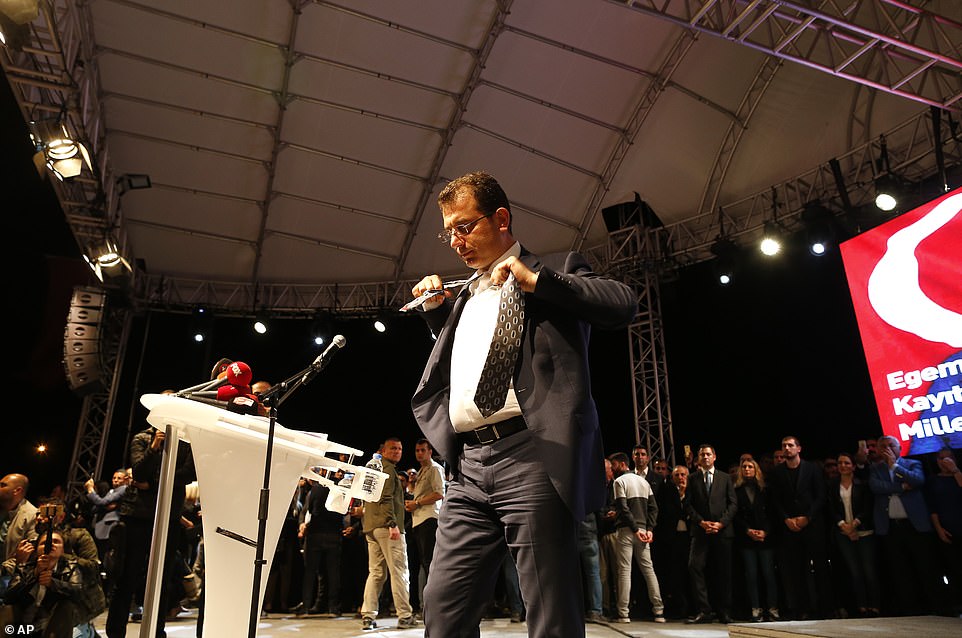 Imamoglu, the opposition, Republican People’s Party’s (CHP) mayoral candidate in Istanbul, whipped crowds into a frenzy over the decision on Monday night 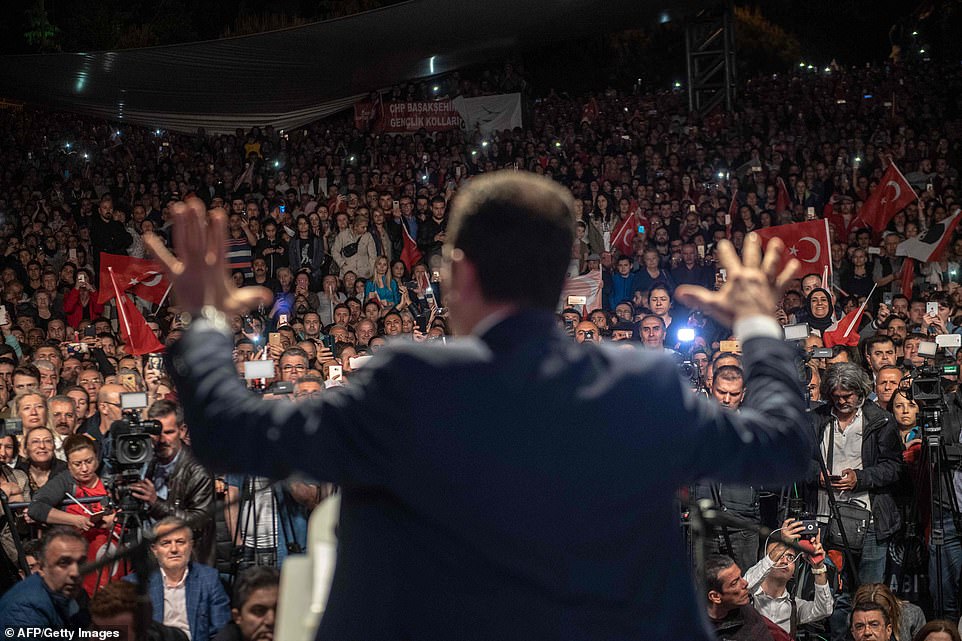 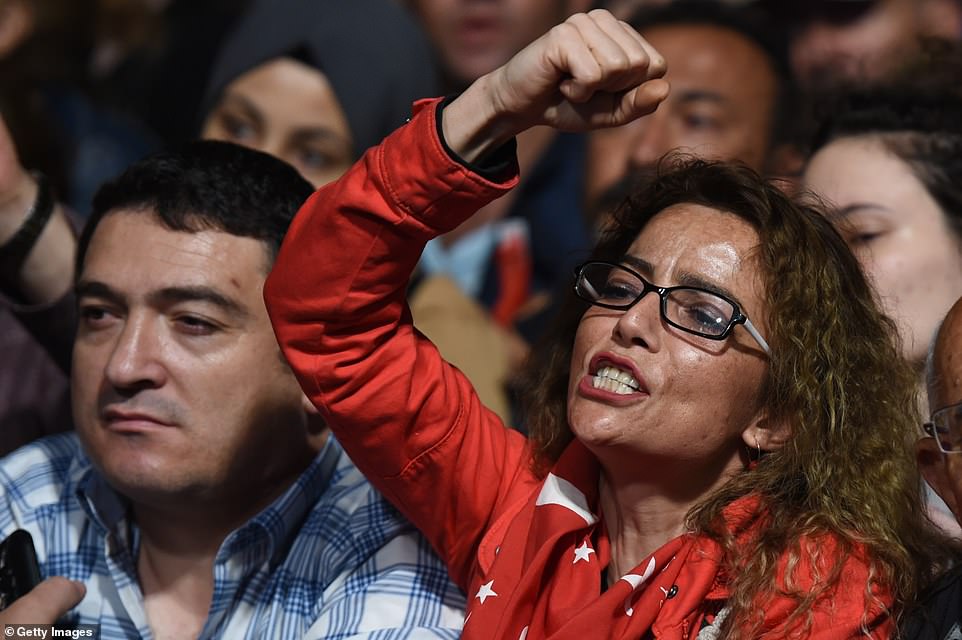 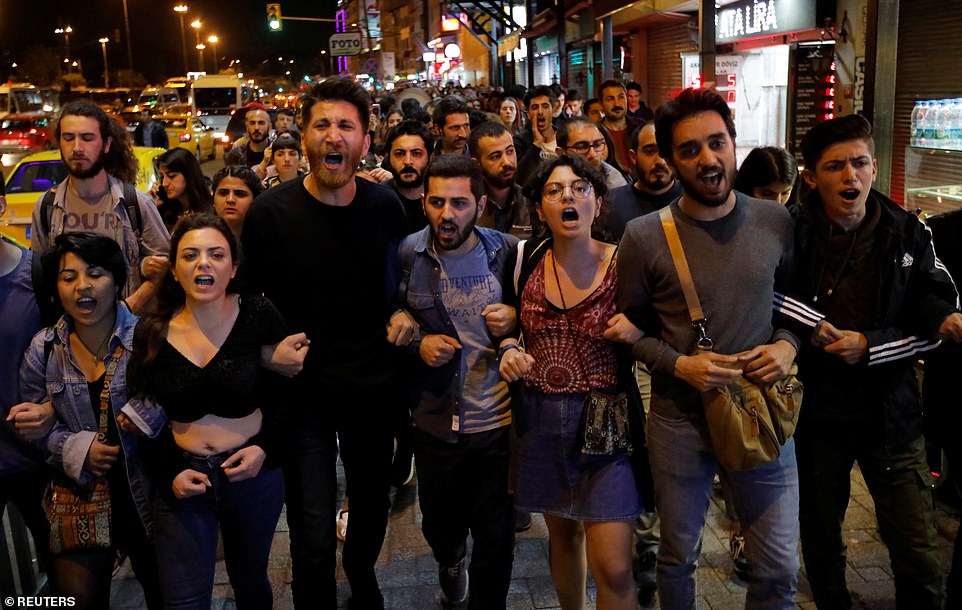 Anger: Supporters of Imamoglu took to the streets for an anti-government protest in Istanbul last night amid fury over the decision to re-run the mayoral election in the city 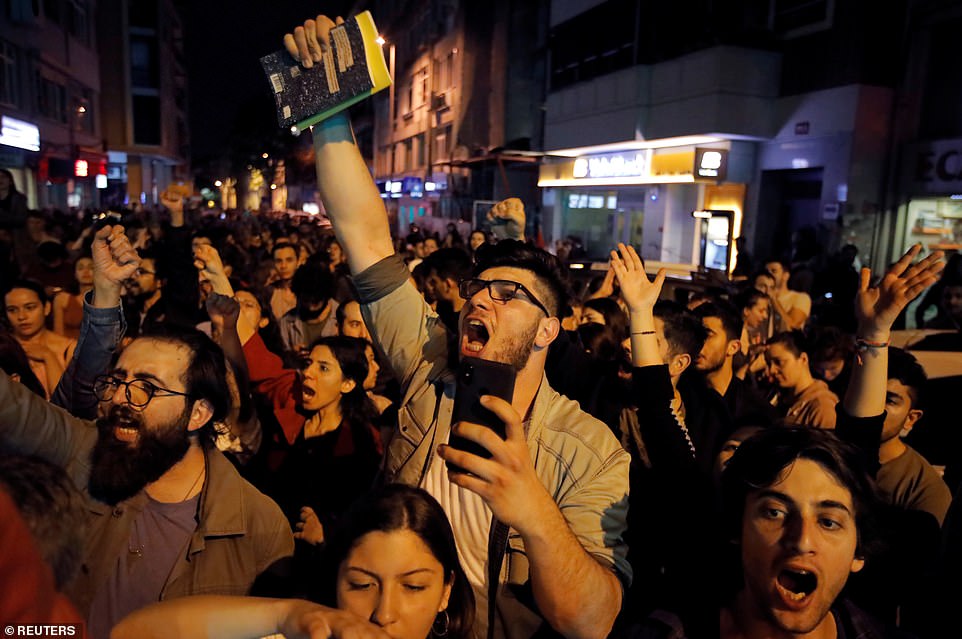 ‘This is damaging for Turkey’s perception as a democracy and will leave Turkey’s economy vulnerable, given risks to macro financial stability in the period to July,’ said Timothy Ash of Blue Bay Asset Management.

Inflation near 20 percent and unemployment near 15 percent drove many voters to abandon the AKP in the initial vote. Before the second vote, tensions with the United States could escalate over Turkey’s planned purchase of a Russian S-400 missile defence system, which could trigger U.S. sanctions.

It was unclear how the CHP and its supporters would respond to a re-run given suspicions over the YSK’s political independence from the AKP, which in recent years has centralized power in the presidency away from other institutions.

One CHP member of parliament, Mehmet Bekaroglu, said on Arti TV that the AKP pressured and threatened YSK judges with prison if they voted against a re-run. Piri of the European Parliament also said pressure was applied to re-do the elections.

‘It is illegal to win against the AK Party,’ CHP Deputy Chairman Onursal Adiguzel said on Twitter. ‘This system that overrules the will of the people and disregards the law is neither democratic, nor legitimate.’ 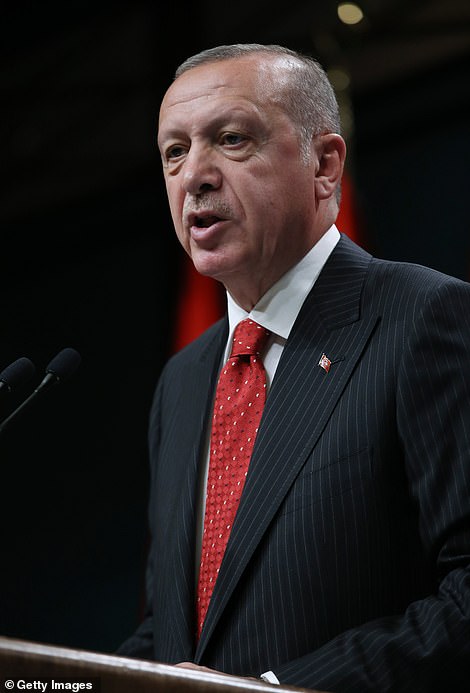 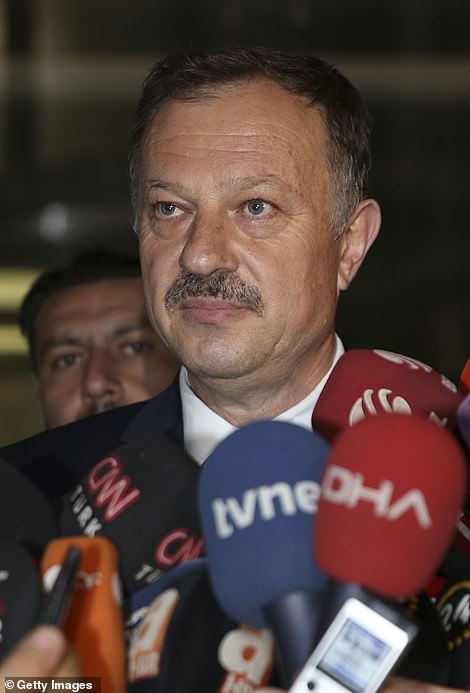 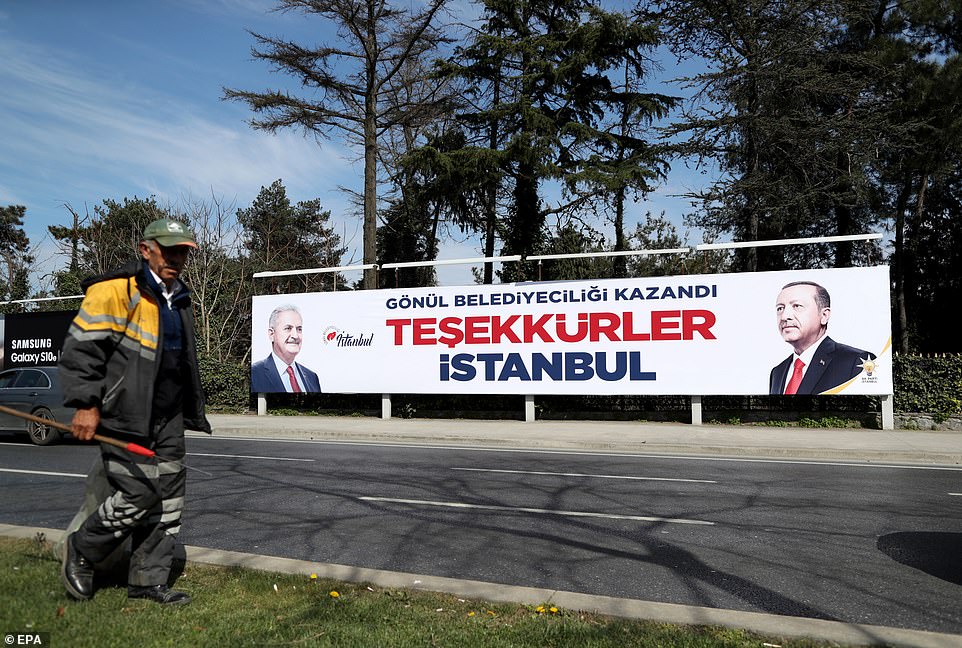 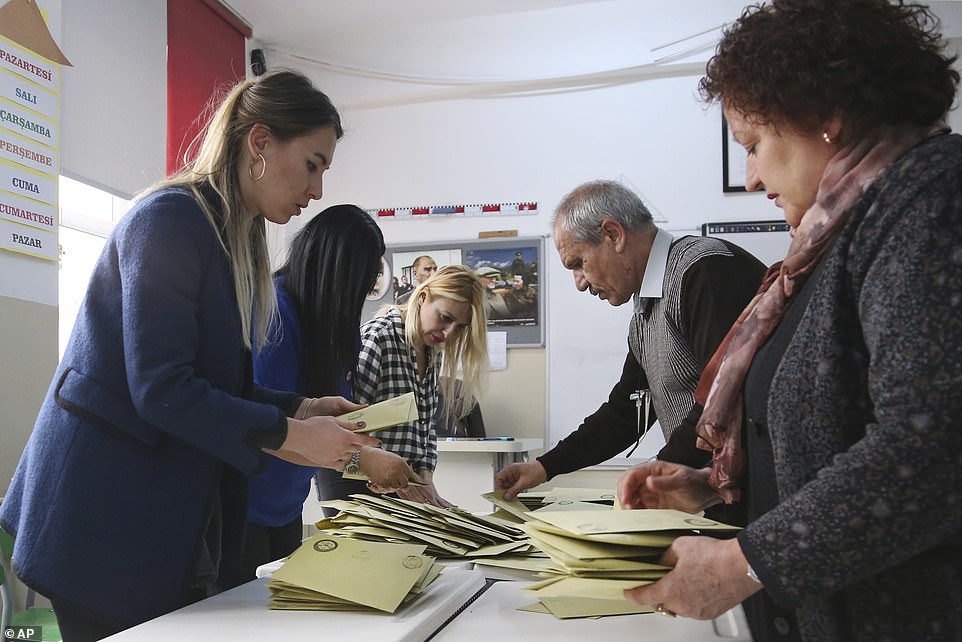 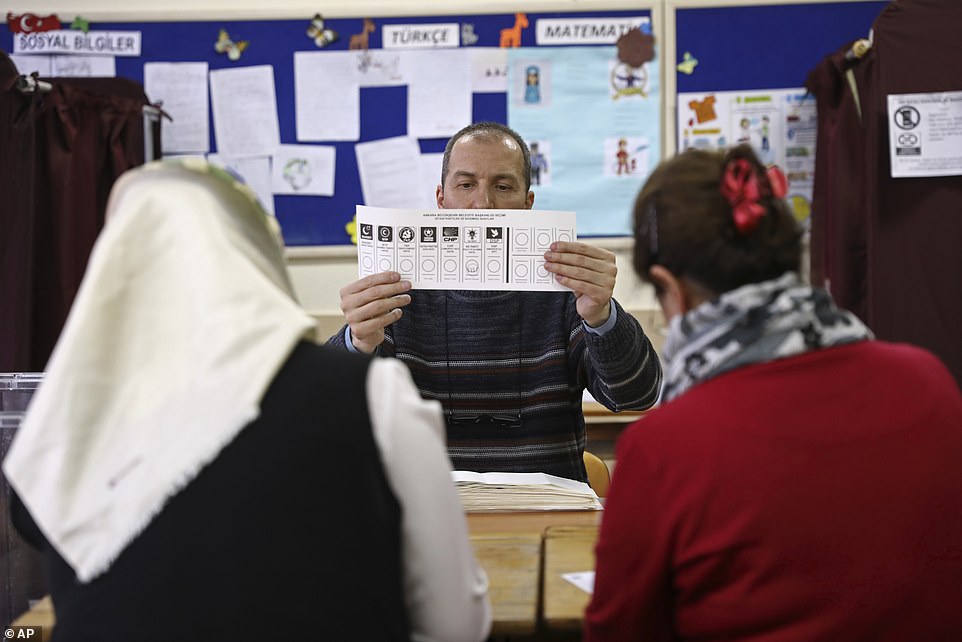 In the capital Ankara – where the AKP also lost the mayor’s office to the CHP – police blocked the entrance to the YSK’s headquarters on Monday evening. The YSK also ruled to file a criminal complaint against those district election board officials who had appointed the ballot box officials.

With its nationalist MHP allies, the AKP wanted the Istanbul results annulled and cited irregularities that affected the outcome, which put it some 13,000 votes behind CHP. On Saturday Erdogan said ‘it’s clear’ the vote was marred by controversy and urged the YSK to ‘clear its name’ with a re-run.

Ekrem Imamoglu, the CHP mayor who officially took office after a smattering of recounts were completed across Istanbul last month, condemned the YSK for annuling the results under AKP pressure.

‘Shame on the YSK. They were placed under political pressure from day one,’ Imamoglu told hundreds of chanting and flag-waving supporters.

Turkey held a re-run of general elections in 2015 when the AK Party failed for the first time since its founding to form a single-party government. In a repeat election, AK Party found the support to form it again.

In recent weeks city prosecutors began probes into alleged irregularities and called 100 polling station workers in for questioning as suspects. 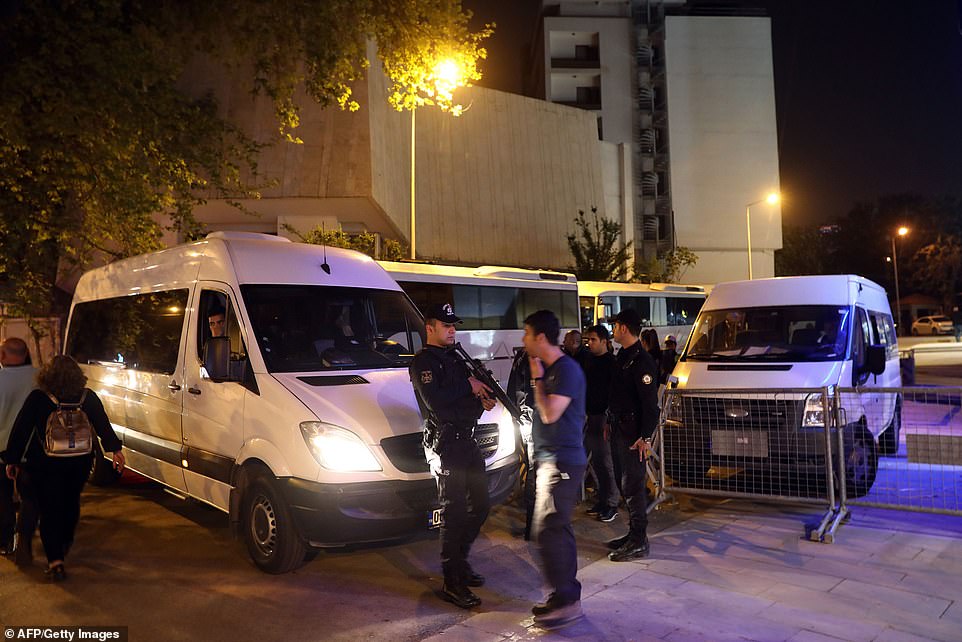 Turkish riot police guard the headquarters of the Supreme Electoral Council, the highest electoral authority in Turkey, in Ankara on Monday

Turkish President Recep Tayyip Erdogan’s AKP party appeared so sure of winning Istanbul that posters of its candidate thanking the city were plastered on walls before the results had even been announced last month.

Erdogan’s AKP suffered a major upset in the ballot after results showed they had lost not only the capital Ankara and also the country’s economic hub Istanbul.

Imamoglu’s rise gives hope to a younger generation of politicians from the Republican People’s Party (CHP), Turkey’s secular party, as it challenges more than a decade and half of AKP in power. 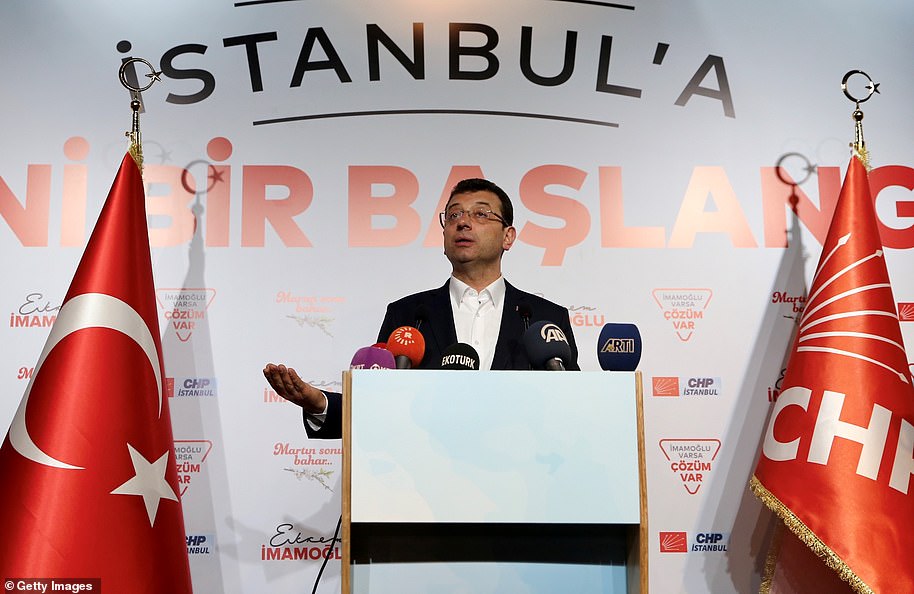 The quietly spoken, bespectacled CHP candidate took a low-key approach to campaigning, hoping that discretion would be an ‘advantage’ against a popular, well-known AKP figure.

Imamoglu, 49, was often seen around a table discussing local issues with voters and taking selfies with them on their mobile phones.

In contrast, it was Erdogan who dominated scores of large rallies for his loyalist Yildirim in Istanbul, whipping up supporters in televised speeches that filled the airwaves, even though he himself was not running.

‘The media, especially the state television is far from being fair… but we have social media which is at least an untouched area for now,’ Imamoglu told AFP during the campaign.

‘Right now my biggest weapon in the field is the thousand-year-old method of communication by word of mouth.’

In one campaign visit, Imamoglu toured the touristic spice market in the heart of Istanbul but kept his stoic approach when one citizen – apparently an AKP voter – refused to shake his hand.

‘Imamoglu is open minded and a man of compromise who is fond of having a common table to discuss problems,’ his press aide Murat Ongun told AFP.

Born in 1970 in the Black Sea coastal city of Trabzon in northeast Turkey, Imamoglu studied business administration in Istanbul University and later completed a masters degree in management, according to his party website.

He worked in the family construction business before entering into local politics a decade ago. He was elected district mayor of Istanbul’s Beylikduzu area in 2014.

He shares one common trait with Erdogan, a love of football. The Turkish leader was a semi-professional player in his youth. Imamoglu was also an amateur footballer and is still involved with local Trabzonspor team.

Imamoglu was well known as a competent mayor of his middle-class Istanbul district and benefited from his non-ideological approach that didn’t polarise voters, said Berk Esen, professor at Ankara’s Bilkent University.

‘If he succeeds in performing well as a mayor, CHP may expand its voter base in Turkey’s most populous city and the country, with Imamoglu emerging as a national figure,’ Esen said.

His campaign slogan touted his pragmatism: ‘If there is Imamoglu, there is solution’.