Mevlut Cavusoglu warned that ‘no-one can stop us’ as it was announced that pro-Syrian government forces will begin entering the Kurdish enclave of Afrin ‘within hours’.

Syrian state media said Assad’s forces will ‘bolster’ local forces in confronting Turkish ‘aggression’. This suggested the Syrian government and Kurdish fighters – a militia known as YPG militia – have struck a deal aimed at repelling an ongoing Turkish offensive on the area.

But Cavusoglu, one of Turkish president Recep Tayyip Erdoğan’s top ministers, warned this morning that ‘if the regime is entering to protect the YPG, then no one can stop us, stop Turkey or the Turkish soldiers.’

Turkey’s foreign minister has warned the country is ready to battle Bashar al-Assad’s troops in the northern Syrian enclave of Afrin after the dictator agreed to support Kurdish fighters. There has been an ongoing Turkish offensive on the area (pictured) in recent weeks 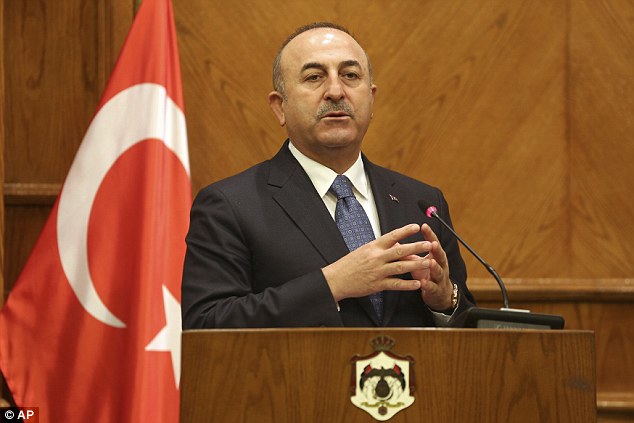 ‘Popular forces will arrive in Afrin within a few hours to support its people’s stand against the Turkish regime’s attack on the area and its people,’ Syrian state news agency SANA said, citing its correspondent in Aleppo.

SANA said the forces would ‘join the resistance against the Turkish aggression’.

‘This comes in the framework of supporting residents and defending the territorial unity and sovereignty of Syria,’ the agency added.

The Syrian region of Afrin, which borders Turkey, is held by the Kurdish People’s Protection Units (YPG) and has faced a month-old assault by Ankara and allied Syrian rebels.

Turkey sees the YPG’s presence on its southern border as a direct threat, and observers have noted it would be more comfortable with a regime force deployed there. 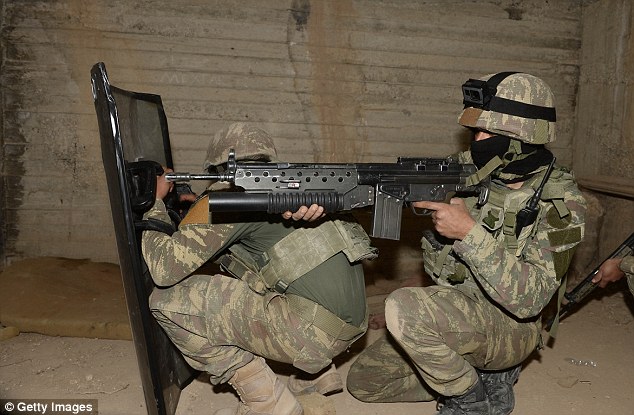 YPG spokesman Birusk Hasakeh could not immediately confirm the deployment of regime-affiliated forces on Monday.

Syrian government forces withdrew from Kurdish-majority areas across the country’s north in 2012, paving the way for Kurdish authorities to implement de facto self-rule.

But negotiations have been ongoing for a potential return of government-affiliated forces to the enclave, officials have said.

Heve Mustafa, the co-chair of Afrin’s executive council, told AFP on Sunday that talks on the subject were ongoing.

‘These talks are happening on the military level,’ she said.

‘We don’t have a problem with the entry of the Syrian army to defend Afrin and its border in the face of the Turkish occupation,’ Hamo said. 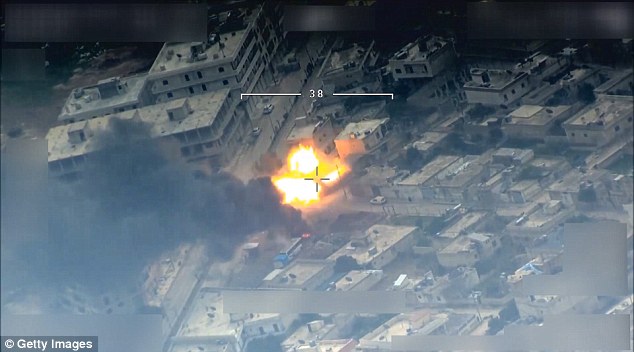 Ankara sees the YPG as a ‘terror’ group and the Syrian arm of the outlawed Kurdistan Workers Party (PKK), which has fought a decades-long insurgency against the Turkish state. Pictured a Turkish strike on a suspected PKK headquarters

But Kurdish officials have remained vague on what kind of regime deployment they would accept in Afrin.

State media did not elaborate on the make-up of the ‘popular forces’ due to enter Afrin on Monday and made no mention of regular army troops being deployed.

Damascus has denounced Ankara’s ‘aggression’ but until Monday had not explicitly said it would intervene.

Turkey and allied rebels launched the offensive on January 20 in a bid to clear the YPG from territory along the border.

The assault has brought to the surface the complex and competing interests of world powers embroiled in Syria’s seven-year conflict.

Ankara sees the YPG as a ‘terror’ group and the Syrian arm of the outlawed Kurdistan Workers Party (PKK), which has fought a decades-long insurgency against the Turkish state.

The United States – Turkey’s NATO ally – has allied with the YPG elsewhere in Syria, providing it with arms and other support to fight the Islamic State jihadist group.