After less than three weeks, taking a key component of the Indian staple spice, known as curcumin, eases injured rugby players’ discomfort just as much paracetamol or ibuprofen, but without their side effects, a study found.

Those opting for medication over the curry ingredient are four times more likely to suffer gastro-related complications, the research adds.

The researchers believe curcumin may also benefit sufferers of inflammatory conditions, such as arthritis patients, without causing the complications associated with many existing treatments.

Curcumin has been used as a herbal remedy in arthritis, cancer and heart disease.

Turmeric may prevent osteoporosis, research revealed in May last year.

The popular Indian spice helps to build and repair bone mass in the elderly, a study by Genoa University found.

Taking a turmeric supplement improves bone density by up to seven per cent over six months, the research adds.

A compound in turmeric, known as curcumin, is thought to balance out cells that remove ageing parts of bone before it is replaced, according to previous findings.

Almost three quarters of elderly people suffer declining bone density, which can cause osteoporosis and is responsible for around 65,000 potentially fatal fractures each year in the UK.

The researchers analysed otherwise healthy men and women with an average age of 70 who were all suffering declining bone density.

Bones in their heels, jaws and fingers were measured at the start of the study using ultrasound scanning.

Turmeric was combined with soy lecithin to prevent it from being destroyed by the stomach; allowing it to reach the small intestine where it is absorbed.

Just one patient experienced a side effect

‘It might prevent the common gastric side effects associated with the use of many anti-inflammatory and analgesic drugs, even though the dose was higher than that recommended for chronic treatment of osteoarthritis.’

Results further reveal those taking curcumin are more likely to stick to their treatment regimen.

Former player and director of of the London Scottish Rugby Club, Angus Stewart, 65, who takes two turmeric tablets a day and was not involved in the study, said: ‘I was much more comfortable whilst exercising and recovered more quickly.

‘After a day in the gym I found the feeling in my joints felt the same as when I was younger.

‘Now I feel I can train comfortably’

The players were suffering bone or muscle problems as a result of incidents, such as repeated tackling.

Half of the study’s participants were given the one gram curcumin-extract tablet Algocur, which is known as Turmeric+ in the UK, twice a day for up to 10 days. The remainder took painkillers.

All of the study’s participants’ physical states were evaluated regularly over 20 days to determine any symptom improvement.

The findings were published in the European Review for Medical and Pharmacological Sciences journal. 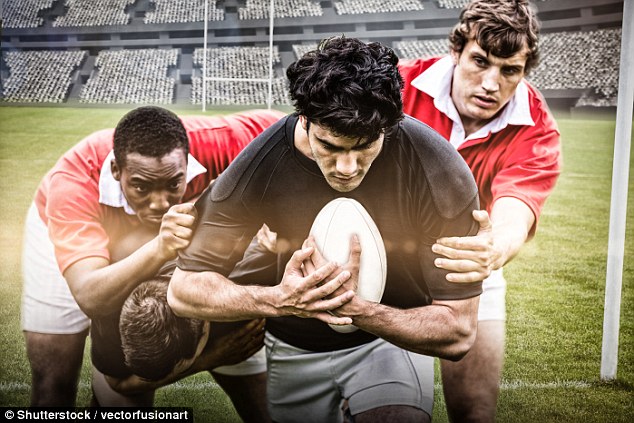 After less than three weeks, taking curcumin eases injured rugby players’ discomfort just as much paracetamol or ibuprofen but without their side effects (stock)

This comes after research released last month suggested turmeric may boost people’s memories by nearly 30 per cent, as well as easing depression.

Taking curcumin causes people to have significantly less protein build-up in the regions of the brain associated with memory and emotion, a study found.

Past studies have linked the onset of Alzheimer’s disease to the accumulation of protein plaques in the brain.

Curcumin, which gives turmeric its yellow color, is thought to improve memory and boost mental health due to its anti-inflammatory properties. Inflammation has previously been linked to both dementia and severe depression.

Study author Dr Gary Small from the University of California, LA, said: ‘These results suggest that taking this relatively safe form of curcumin could provide meaningful cognitive benefits over the years.’