The House of Horror parents went off the rails a decade ago when they started drinking and gambling after a lifetime of abstinence, the younger sister of the mother has revealed in an exclusive interview with DailyMail.com.

Teresa Robinette says Louise Turpin was just about to turn 40 when her sister hit a midlife crisis.

And now Teresa and her half-brother Billy Lambert wonder if the seemingly perfect life that Louise and husband David were living could all have gone wrong when they suddenly and inexplicably cut loose.

‘Louise had never drunk a beer or smoked a cigarette or done a drug or anything like that in her whole life,’ said divorced mom-of-five Teresa.

‘Then one day, just as she was turning 40 she called and told me that she and David were going to have a drink.

‘When I spoke with her later that night she was drunk for the first time in her life. I was in shock.’

Cutting loose: David, 57, and Louise Turpin, 49, allegedly went off the rails and began drinking and gambling after Louise turned 40, her sister says. Above the couple are pictured in a Las Vegas chapel 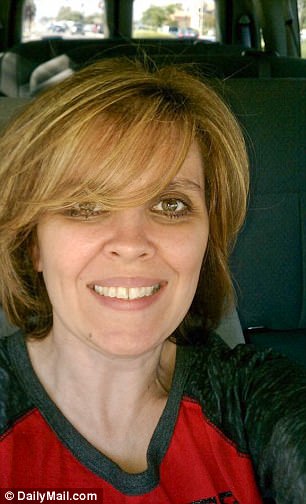 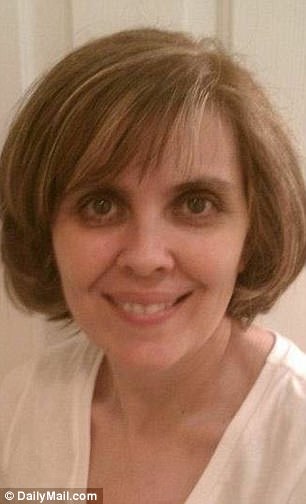 New look: Louise, who was a brunette at childhood, opted for a totally different look a few years ago chopping off her long locks and dying her hair blonde 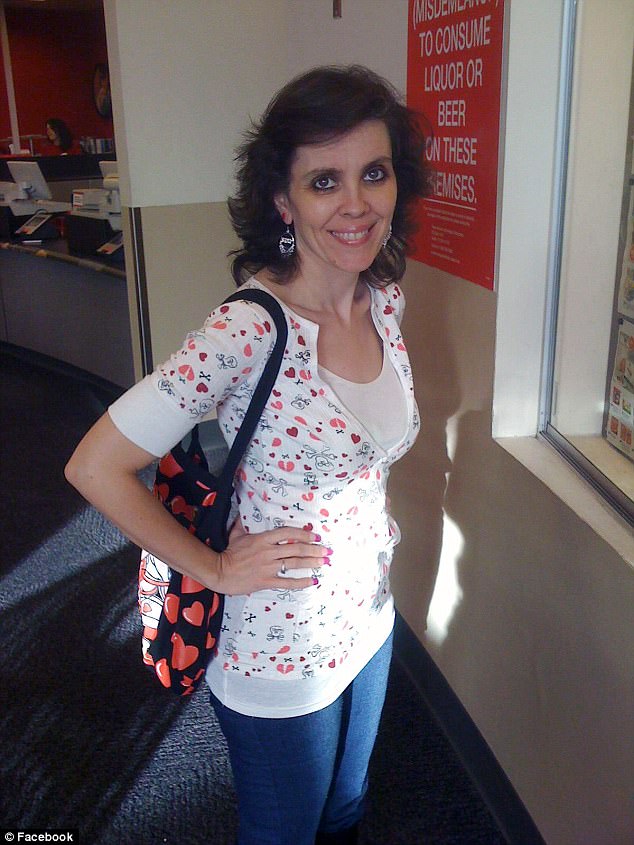 Louise (pictured in 2013) is believed to have naturally dark hair 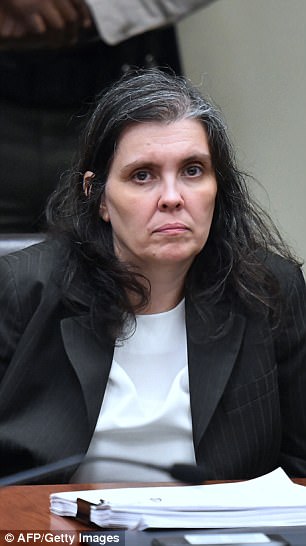 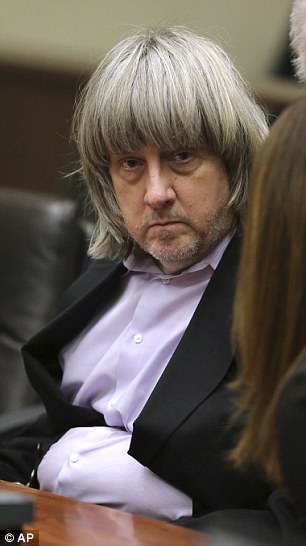 Louise, 49, and David Turpin, 57, were charged with 75 counts including torture, false imprisonment, child abuse and abuse of dependent adults. The couple, pictured during their arraignment last week, pleaded not guilty to all charges

Now Teresa believes the horrific torture that the couple allegedly inflicted on their 13 children could all be down to their late-in-life experimentation with things they never experienced when they were teenagers.

‘At that same time she started gambling, she started taking trips down to Vegas and she got a totally different hairstyle — dramatically different,’ said Teresa, 36, the youngest of three sisters born to former preacher Wayne Robinette and his wife Phyllis.

They started having a wild period that they didn’t have when they were younger.

On Monday, Teresa told Megyn Kelly that around 2009  her sister told her of a plan she had, to sleep with a man she met online, with her husband’s permission.

‘She told me that her and David had met a man online from Huntsville, Alabama. And they were on their way there to meet him and that she was going to sleep with him. And that David was okay with that,’ Robinette said.

‘Getting drunk or going to Vegas, they just didn’t do that sort of thing and once they started experimenting I wonder — and I have battled with this ever since I found out what had happened — is that what started this?

Authorities in Riverside County, California, have charged the Turpins with 75 counts including torture, false imprisonment, child abuse and abuse of dependent adults. David Turpin also faces a charge of lewd acts with a minor.

They are each being held on $13 million bail and deny all charges. 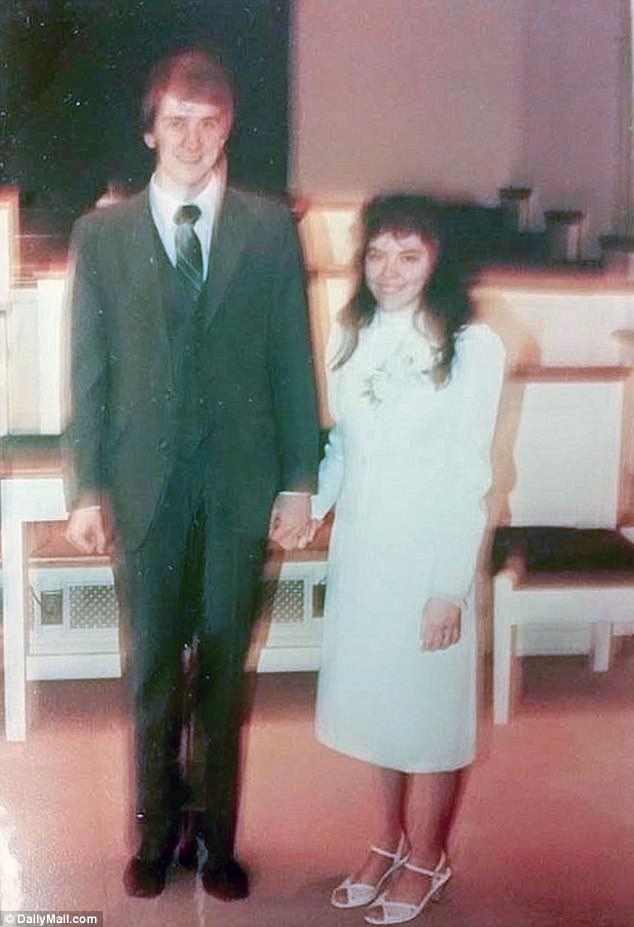 The couple have been married since Louise was 16.  She eloped with David Turpin after he signed her out of school and drove them to Texas. The couple was caught and returned to their hometown to wed. Above they are seen in their wedding photo in Princeton, West Virginia in 1984 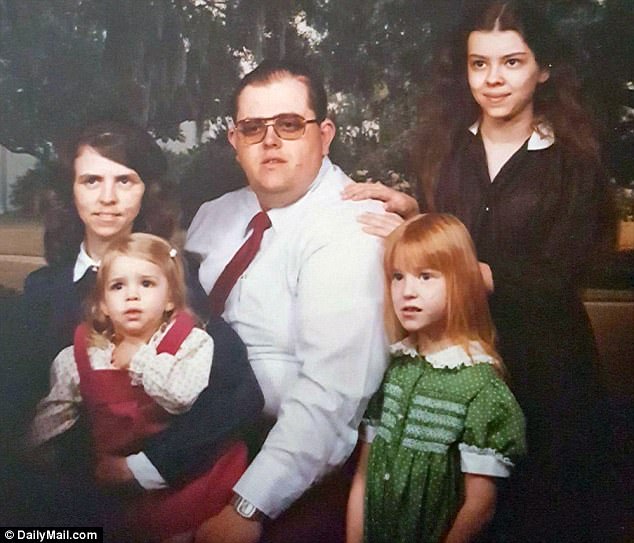 Teresa Robinette says her sister had never ‘had never drunk a beer or smoked a cigarette or done a drug’ in her whole life. ‘Pictured: Louise (top right) with her mother Phyllis, (left) her father, sisters Teresa (on father’s lap) and Elizabeth (bottom right) 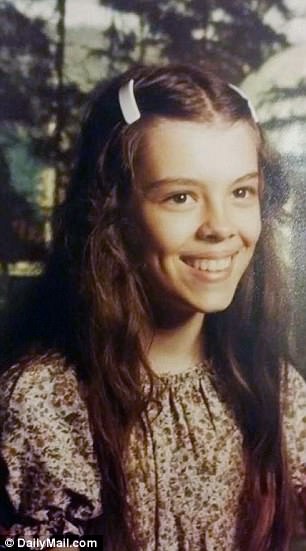 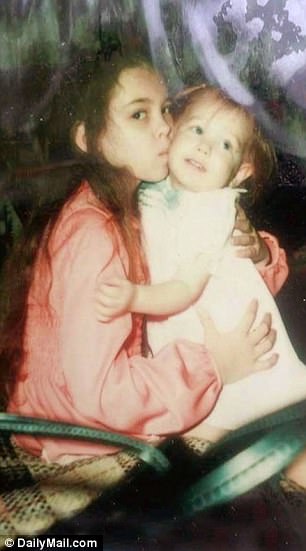 Her mom, the wife of a preacher, allowed Louise to date David Turpin secretly. Above she is pictured as a 7th-grader (left) and with her sister Elizabeth (right) 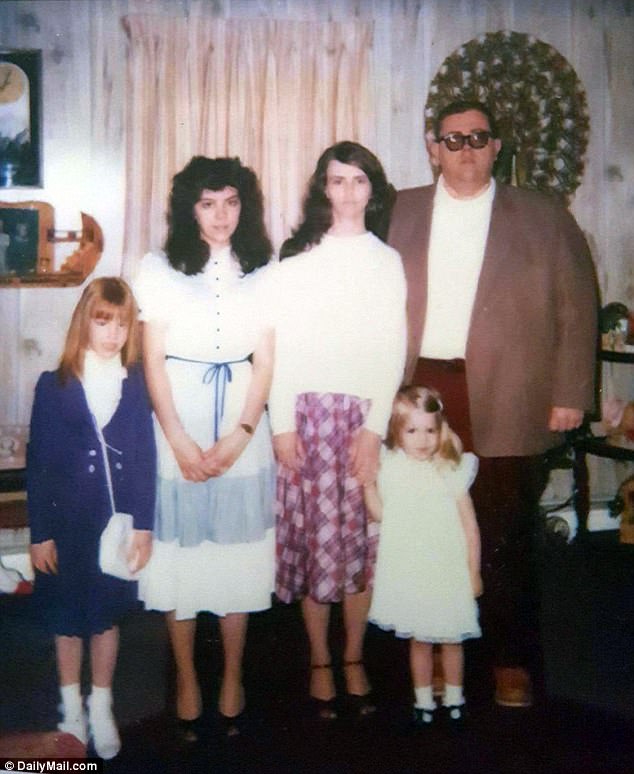 The kids’ horrific lives were revealed when the Turpins’ eighth child, a 17-year-old girl, managed to escape with a deactivated cellphone she had found in the house.

She could only get out of the window because she was so undernourished that cops initially took her for a 10-year-old.

Once outside she used the phone to dial 911. When cops arrived they found children wallowing in filth chained to their beds. They believe the couple shackled them because of an earlier escape attempt.

All 13 — seven adults and six minors all with names beginning with the letter ‘J’— are now in care. The older children are being classified as ‘dependent adults’ as they are unable to look after themselves.

‘I was told that the 17-year-old was tested at a first-grade level. There was no record of any schoolwork done even though they were registered as a home school,’ Teresa revealed.

But she said her sister, who — as DailyMail.com revealed exclusively last week — ran away with David when she was 16 and so never had an education beyond tenth grade, was a fervent believer in homeschooling.

‘Virtually every time I spoke with her on the phone, she would tell me I should homeschool my kids.

‘But I always told her I wanted my kids to be in public school where they can experience other people so they know how to handle themselves when they get older. 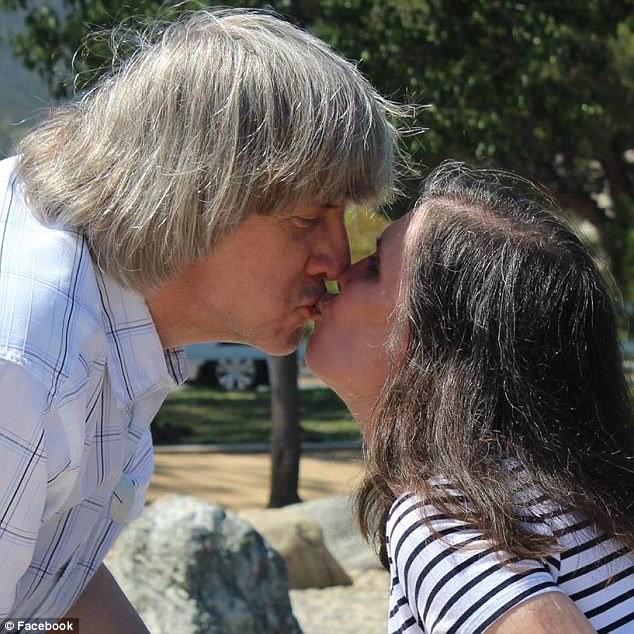 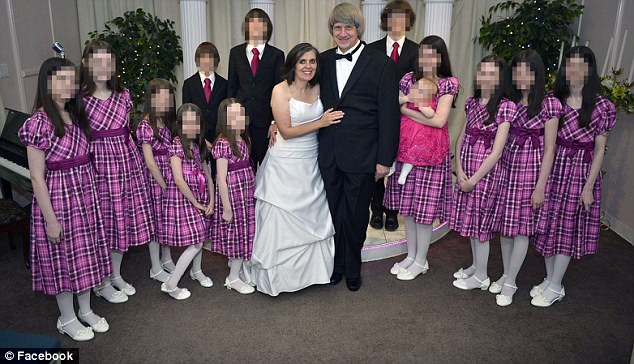 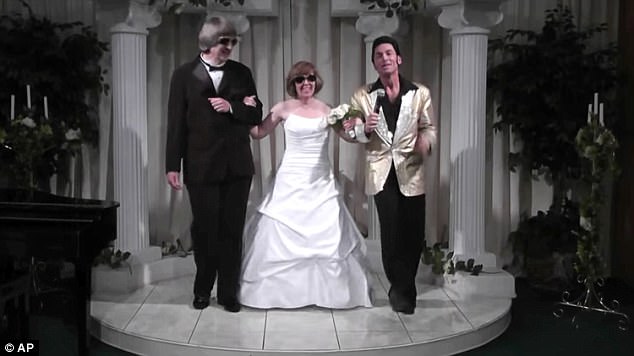 ‘There were times when I would call her and she would say she was doing a lesson with some of the kids and she would have to call me back, so I always thought they did their work but now I wonder how much, if any, work they really did.’

Billy said that when he went to visit the couple with his mother 15 years ago in Rio Vista, Texas, he saw schoolbooks that made him believe the kids were getting some education.

‘There were desks, there were papers, reading tests, math, equations. So when I saw them there was schoolwork there. Who did it, I don’t know. All I know is I did see some books and four or five desks. I didn’t watch Louise physically teach them, but there was some evidence of schoolwork there.’ 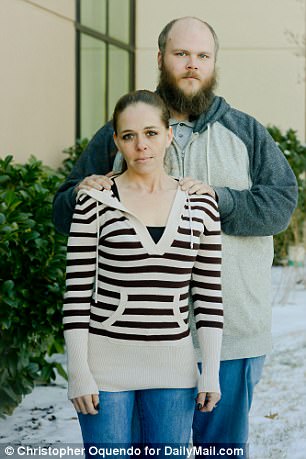 Siblings: Teresa Robinette and Billy Lambert (pictured) gave the full details of the twisted life of their older sister Louise Turpin. Lambert, 30, Louise’s half-brother, was the last to speak to her before her arrest

Teresa and Billy believe both parents are equally to blame for the life of horror they allegedly inflicted on their baker’s dozen of a brood — and they say they should pay for it for the rest of their lives and never be allowed out of prison.

‘I blame both of them equally,’ added Teresa. ‘If she had nothing to do with it she should have stepped up and left. She could have got out at any time — unlike their children.’

And Billy added: ‘I would rather believe that David put this into her head, but I can’t because she grew up knowing this sort of thing was wrong. We were not brought up like this.

‘If it was David, she should have got out of that situation herself a long time ago.’

Teresa and Billy, 30 — the fourth of their mother’s six children by three different men — say they have been attacked mercilessly online for not being able somehow to prevent the ongoing tragedy that unfolded over years in the Turpins’ four-bedroom home in Perris, California.

But the siblings who both live more than 2,000 miles away in eastern Tennessee, say there is nothing they could have done because their sister isolated herself from her family over the years. 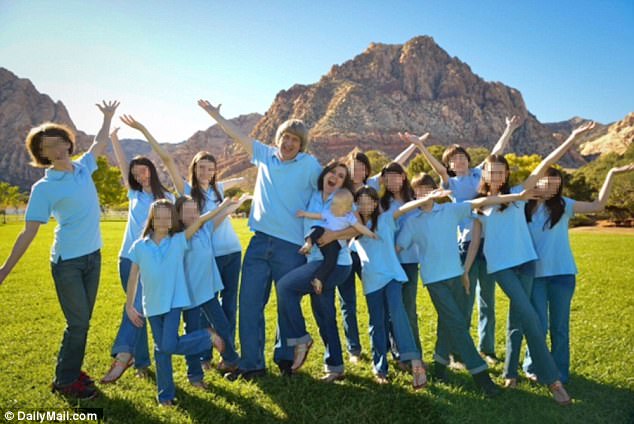 Police raided the couple’s four-bedroom house in Perris, California, and found many of the malnourished children shackled to their beds by chains, living in unimaginable filth 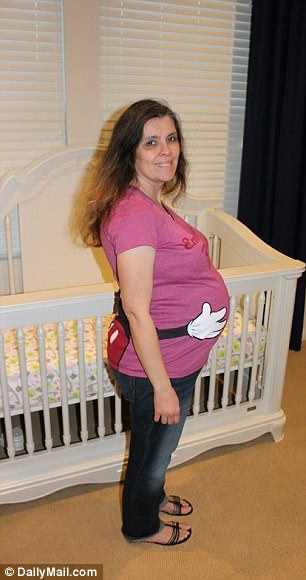 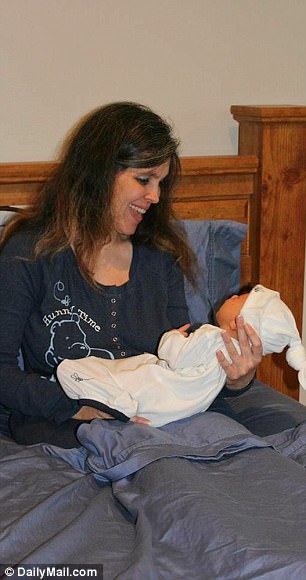 The mother of 13 had told her brother Billy, who was the last to speak to her before her arrest, that she wanted another child. She is pictured left while pregnant with her youngest daughter and right after she gave birth

‘I had always known that David and Louise were a little odd — but not that they were abusive monsters,’ said Teresa.

She remembers a trip she made with her mother to visit the couple when they lived in Brea, California, more than 20 years ago. At the time David and Louise Turpin only had four children.

‘We rode a train out there cross country,’ she said. ‘It was so cool. David and Louise were there to meet us at the station and she took us to her house. It was very clean and very well kept.

‘She took us to Disneyland while we were there. We went to Universal Studios, we went to the old Movieland Wax Museum, We saw the Hollywood sign and the world’s biggest tree with a tunnel cut through it. It was a trip I will never forget, it was the highlight of my life.

‘I know that when they took the children out, they would dress them all alike, and they would all walk in a straight line — they were like a school rather than a family.

‘But I just thought she was overly strict with them. People say I should have had them checked out, but why would I? Should I report all the strict moms I know?’

‘Looking back now in my mind, I’m thinking I should have seen this or that, but the thing is she was always very strict, she would never let them watch TV and as they got older I started asking questions like, “Why aren’t they dating?”

‘I told her: “Get that girl a boyfriend,” but she would just shrug it off and say things like “Oh, she doesn’t want to date. She really doesn’t talk to boys.”

‘Three or four years ago she told me the oldest, who would have been about 25, had been flirting with a boy. To me it was so weird because the girl was so old to be starting to flirt. I was sitting there thinking, “Really?”

‘But that just led me to believe that she was way too strict with her kids, but it would never make me think she was chaining them up and torturing them.’