A TV star and celebrity style icon has had her beach getaway ruined when thieves swiped her car keys, returned to her resort at 3am to steal her adored $50k MG electric sedan, then firebombed and dumped it at a local indigenous village.

Melissa Hoyer’s much-anticipated holiday break began in the new year when she packed belongings and her dog Scout into her smart 15-month old MG HS EV for the eight hour plus drive to Yamba Beach in northern NSW.

Hoyer, a lifestyle and news host on TV, radio and online, was looking forward to a short break before returning to Sydney to mark her son, Connor’s 21st birthday.

The well-liked personality has spent years on the circuit, fronting up with celebrities like Kylie Minogue, sports stars such as Shane Warne, Roger Federer and Ian Thorpe, on radio shows such as Ben Fordham’s and as a style and taste judge alongside the likes of designer Akira Isogawa and chef Curtis Stone.

After arriving at Yamba, the commentator posted photos of a friend’s birthday drinks sipping champagne on a balcony with Yamba’s main beach and surf in the immediate background. 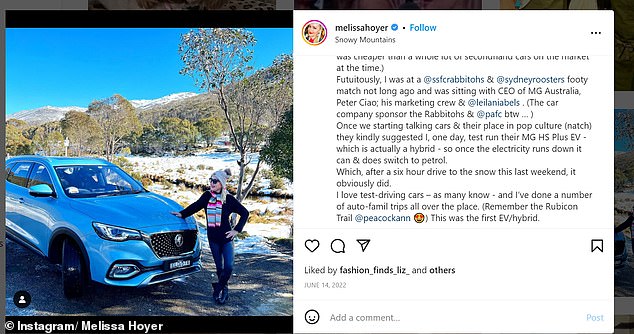 Hoyer with a test drive model of the MG HS Plus EV she bought last year and grew to love, taking it on an 8.5 hour trip up to Yamba only to have the keys stolen and then the car itself 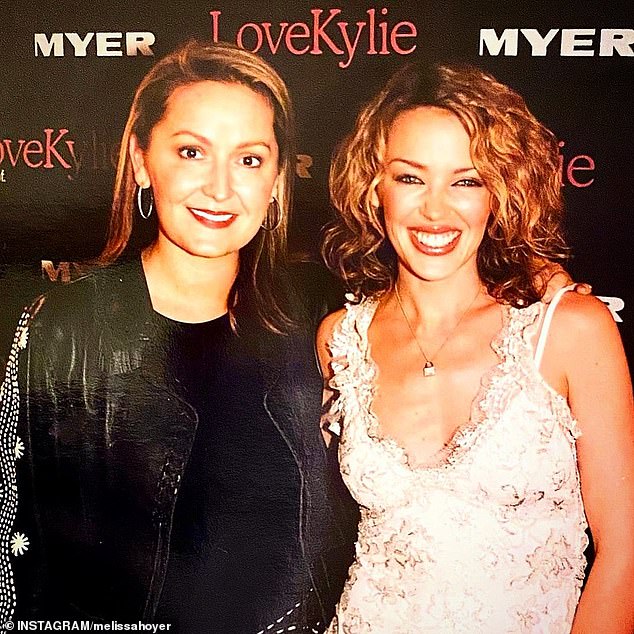 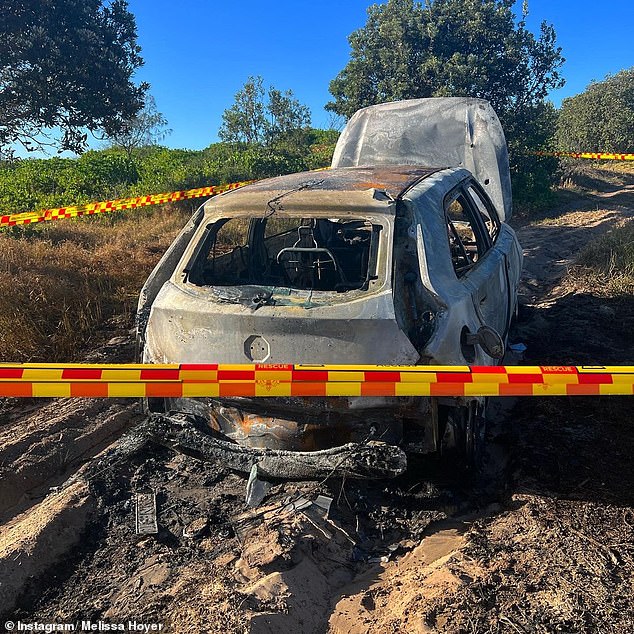 Hoyer posted another picture of the waves with the words ‘Room with a view. Loved this place so much last January, booked it as soon as I left last time’, taken from The Surf, Yamba’s luxurious ‘free thinking’ resort hotel with pool, undercover parking and sun terrace with panoramic views.

Hoyer enjoyed several carefree days on the beach before her car keys were stolen on January 6, and she arranged to have her spare key express posted to Yamba.

The thieves returned at 3am on January 7 and stole the car with, Hoyer later posted, ‘everything captured on CCTV.

‘And took my little 15 month old MG & burnt it, leaving it outside the indigenous Ngaru Village. Whoever they are – what complete and utter d***heads.

‘The crime waves in so many regional areas throughout the country are mind-blowing and having had 2 police interviews, they seem to have resigned themselves to the fact it has become the norm.

‘So, what was going to be my final day here before I drive back for my son’s 21st has been a day of insurance claims, finding a rental car and police interviews. Woohoo!’

However Hoyer did admonish her resort, posting ‘with a spate of robberies, a boom gate or secure garage door wouldn’t go astray @thesurfyamba ??’ 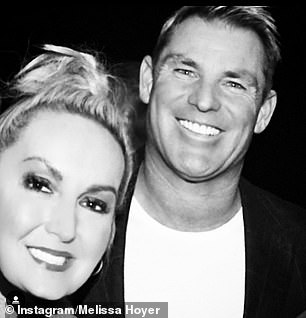 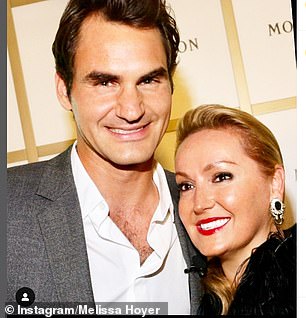 Melissa Hoyer is a well-liked lifestyle and news host on TV, radio and online, appearing over the years with stars such as Shane Warne (left) and Roger Federer (right) in the course of her career 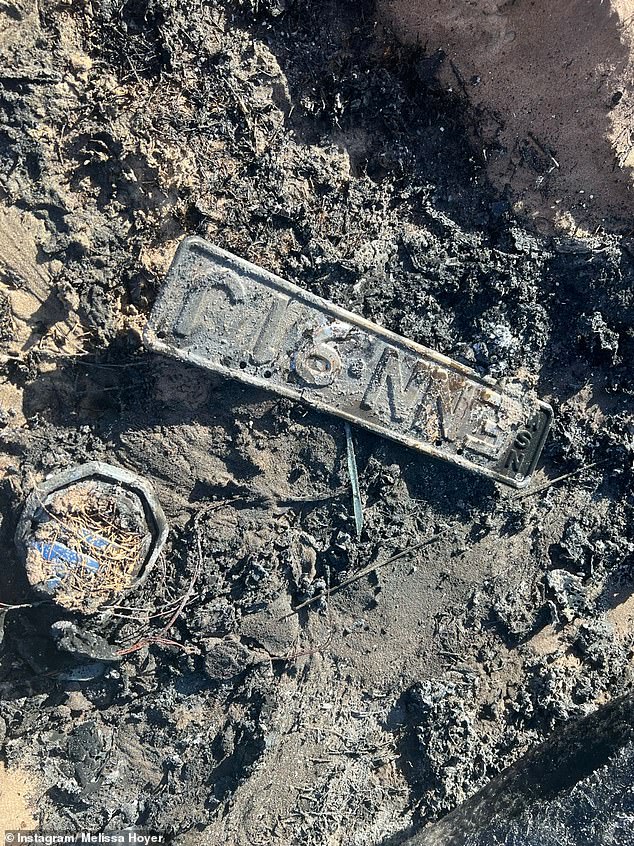 Burnt remains of Hoyer’s beloved car, the registration plate and MG badge of the vehicle stolen from her resort and abandoned outside the Ngaru Indigenous Village four minutes away in Yamba 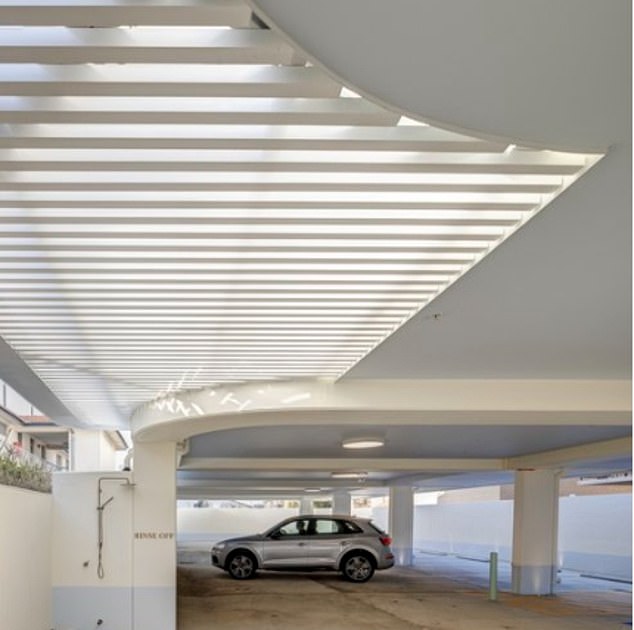 Melissa Hoyer raved about the resort but after her traumatic experience admonished the luxury hotel, saying on Instagram that after ‘a spate of robberies, a boom gate or secure garage door wouldn’t go astray @thesurfyamba ??’ 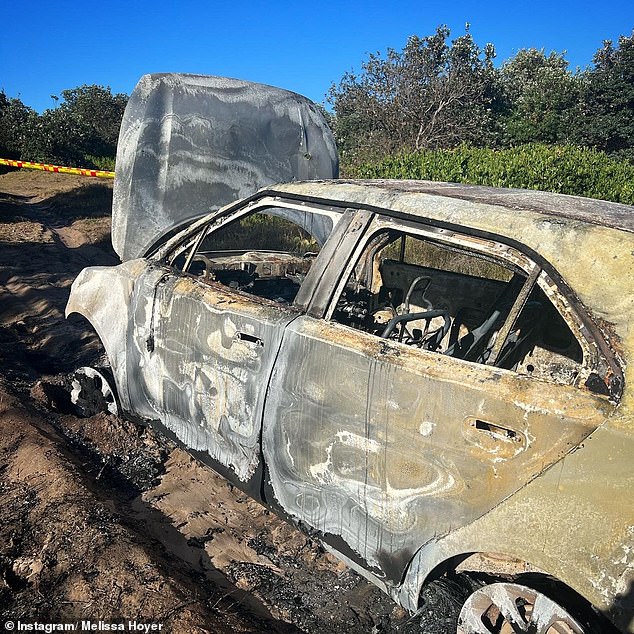 Hoyer received a phone call from Yamba police at 5.30am on January 7 reporting ‘my car having been burnt to a crisp outside the Ngaru Village mission’.

Located next to 1.6km long Pippi beach by traditional Aboriginal land sites, Ngaru Village, aka the Birrigan Gargle Local Aboriginal Land Council, is a four-minute drive from The Surf hotel.

It has a history of crime, drug and alcohol problems due to unemployment, transport and housing issues.

On being informed of her car’s fate, Hoyer wrote on Instagram, ‘Happy holiday, How much more “resilience” can this girl muster up? 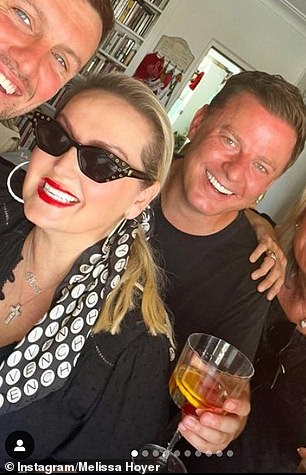 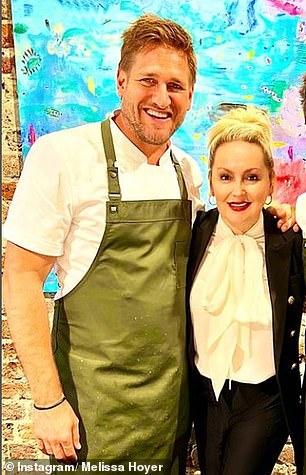 Melissa Hoyer (left with Ben Fordham) and (right with Curtis Stone) took a deserved break from her career on the celebrity and style circuit to relax in Yamba, where the carf theft occurred

‘I thought this short break was going to take the s**t our of the last few s*****y years, but adversity makes you strong, allegedly.

‘It’s funny, I had a huge cry before not because of the actual car (which I did love but it is just a “thing”) – more the fact it is a totally unnecessary and scary violation of you and the stuff you have saved up for.

‘And I know anyone who has ever been broken into, robbed or anything like that (me too!) you will know exactly what I mean.’

While organising a rental car to rush back to Sydney to celebrate her son’s 21st, Hoyer received many sympathetic remarks and condolences, with one person saying they heard the sirens and others admonishing criminal and car thieves. 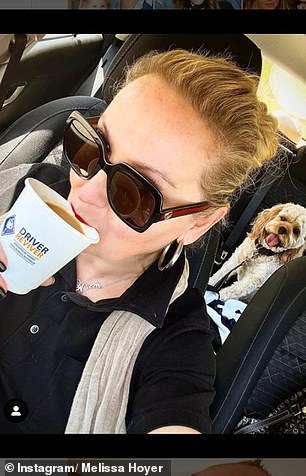 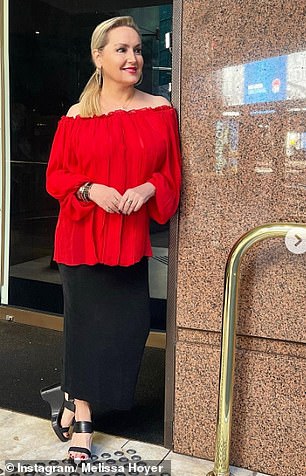 Melissa Hoyer took it in her stride, hired a rental and set off back home (left) with pooch Scout in the back, and was back to her normal elegant self in Sydney a few days later (right)

Hoyer responded: ‘Thank you so much to everyone who has been in touch – very lucky to have a really lovely community in life & here, on this crazy platform.

‘I will return home, not exactly with a holiday glow, but would still come back . . . Nothing will keep me down.’

NSW Police confirmed they ‘attended a vehicle fire’ on January 7 on Rocky Laurie Drive, Yamba about the ‘MG (that) had been stolen from a Yamba address.

‘No persons have been arrested/charged. Inquiries are ongoing.’