TV that costs $100,000 and ROLLS up like a piece of paper is finally coming to the US next month

65-inch TV that costs $100,000 and ROLLS up like a piece of paper is finally coming to the US next month

According to LG’s website, the television has an OLED screen, a Dolby Atmos and Sound Pro sound system and has both Google Assistant and Amazon’s Alexa for built-in voice control.

The 65-inch screen, which is described as a ‘revolutionary new experience,’ gets tucked into aluminum housing unit when not in use, either for watching movies or playing video games.

It has an OLED screen, a Dolby Atmos and Sound Pro sound system and both Google Assistant and Amazon’s Alexa for built-in voice control

The cabinet also has a Dolby Atmos sound system of its own.

Manufactured in LG’s Gumi facility, each TV is painstakingly assembled ‘with craftsman-like skill with attention to every detail’, LG said last year.

By comparison, the average price of a 4K TV can be purchased for less than $1,000, depending upon retailer. 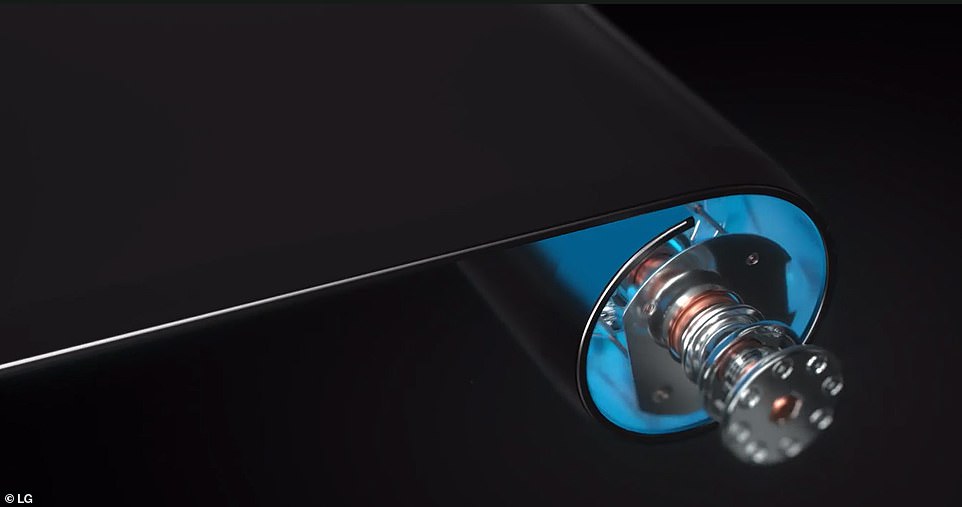 Described as a ‘revolutionary new experience,’ the TV gets tucked into aluminum housing unit when not in use

In addition to rolling down, the TV has a mode where it is partially rolled down, which can be used to show a clock, photos and other tasks.

It also comes with a 120Hz 4K gaming, a variable refresh rate and four HDMI ports to plug in other items, such as a gaming console.

The TV allows owners to ‘curate their living environment without having to permanently set aside space for a large, black screen that is only useful when turned on,’ LG said in a statement.

If a TV that costs the same as a BMW Series 5 isn’t ostentatious enough, buyers can personalize their TV with an engraving on the on the aluminum base.

Initially available in South Korea, Park Hyoung-sei, president of LG Home Entertainment Company, said in 2020 that the television ‘genuinely deserves to be called a work of art.’

‘This is a true luxury product that reimagines what television can be, this unique TV delivers a differentiated user experience and a new way of thinking about space while once again confirming LG’s leadership in the premium TV market,’ Hyoung-sei added at the time.

According to The Verge, the OLED R set will be available for pre-orders in August, but a look on LG’s website shows the ability to add to cart now.

WHY ARE OLED SCREENS CONSIDERED TOP OF THE LINE?

OLED is an improvement on LED technology. LED TV uses backlights. But with OLED there’s no backlight. LG OLED screen technology uses self-lit pixels which work independently to emit their own light

It is the only TV technology to create color like this. LCDs, for instance, use color filters and liquid crystals that block light to create an image.

This means that OLEDs can be thinner and more flexible than any other television technology currently on the market.

LG says: ‘If you’re watching a film with a typical LED TV, black is not dark enough and the details of the night scenes are not clear enough.

‘This is because LED TVs cannot achieve perfect blacks, creating an imprecise level of darkening which results in a halo effect around brightly lit objects on dark background.