By Henry And Tom Herbert For The Mail On Sunday

Where do experts choose to eat on holiday?

Here they give their top tips on where to go to enjoy the most delicious food.

Down the hatch: Tom Herbert (left) tucks into oysters at Estamine as brother Henry looks on. The restaurant is on an island in the Ria Formosa natural park. The views and service are great

Where is your favourite food market?

Henry: The town of Loule, just inland from Faro, has stalls filled with fresh produce, all spilling out on to the cobbled streets next to the indoor market. It’s a vibrant, lively meeting point every day but it’s best to go on a Saturday – the place is buzzing.

Tom: For a massive choice, the fish market in Quarteira can’t be beaten. From fresh clams and prawns to sea bass and dourada, the daily catches are perfect for bringing back to barbecue.

Which bakeries do you rate?

Henry: For me it’s Pastelaria Charlotte in Almancil. It doesn’t look much from the outside but you can’t beat its amazing pastel de nata (Portuguese custard tarts) and cakes.

Tom: Near the harbour in Faro is Urban Bakery, where you can see the bakers in action at the back of the shop. If you visit at Easter, try the regional speciality folar. It’s glorious – like a massive, buttery Chelsea bun but with less fruit and more spice. 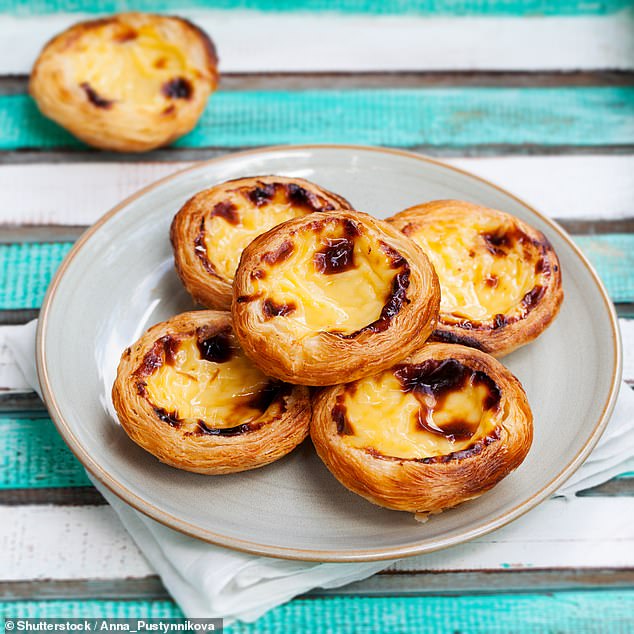 Egg on your face: The ‘amazing’ pastel de nata (Portuguese custard tarts) are a hit at Pastelaria Charlotte in Almancil, according to Henry Herbert who says the joint ‘doesn’t look much from the outside but you can’t beat the cakes’

And for great seafood?

Henry: Gigi’s (quintadolago.com/en/restaurants/gigis) is the perfect holiday restaurant – you get an entertaining afternoon eating some of the finest seafood cooked over charcoal while a sea breeze cools you down.

Owner Gigi strides around his restaurant as the master raconteur, telling stories, using his sabre to pop champagne corks and singing along to his favourite operas.

It’s not for the faint-hearted but it will always be a memorable occasion.

Tom: The most enchanting restaurant I’ve ever been to is the family-run Estamine (estamine.deserta.pt). It’s on a deserted island in the Ria Formosa natural park. The park is teeming with wildlife and the views are sensational. You also get superb service.

Where do your family like to go for dinner?

Henry: They would vote for the new Amara restaurant at Four Seasons Fairways (amararestaurant.pt), which is light and bright and has great views of the hills.

It’s modern, with attention to detail in everything from the design of the restaurant to the food. My years as a chef have taught me that contemporary Portuguese dishes featuring crab or foie gras don’t come without a lot of knowledge and skill in the kitchen.

Tom: Casa Velha in Quinta do Lago (quintadolago.com/en/restaurants/casa-velha) is true to its roots and serves locally inspired fare in a space perfectly designed for the world’s elite. Alas, we can’t go there as often as we’d like as we would quickly run out of money.

Four Seasons Fairways (fourseasonsfairways.com) offers seven nights’ self-catering in a two-bedroom villa (sleeping six) near Faro from £1,844, with access to clubhouse and facilities. Fly to Faro with British Airways from £75 one way (ba.com).