Careful, you’ve got a bear behind! Twelve-year-old boy keeps calm as huge animal rears up on him while he walks through the Italian hills

A brave boy who had recently studied what to do if he came across a bear in the woods was forced to put his lessons to the test when one reared up on him while he walked through the Italian hills.

Animal lover Alessandro, 12, tried to remain calm and walk away slowly from the enormous animal that was following him.

The boy recorded the dramatic scene which happened while he was enjoying a picnic with his family in Sudtirol, northeastern Italy.

In the video, the youngster is slowly walking down the hillside and a bear’s head can be seen poking out from the shrubbery behind him. 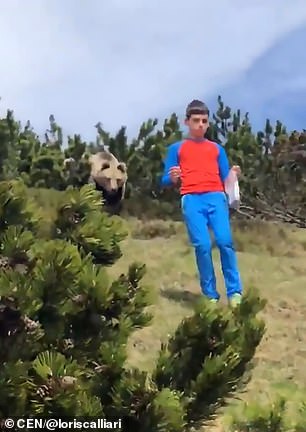 Alessandro, 12, had been enjoying a picnic with his family in Sudtirol, northeastern Italy, when the bear began following him through the woods

Alessandro takes a look behind him and the bear then starts following him but he does not panic, putting into practice everything he read.

The youngster continues walking down the hill and the bear can be seen standing up on its hinds legs as the boy walks away.

His uncle, Federico, told local newspaper La Stampa: ‘We had left home only a little while before. In the mountains there were some other people but it was otherwise silent.

‘Alessandro walked a few metres ahead of us in order to collect stuff and at one point we saw him coming out from the woods and being followed by the bear. Obviously we were terrified but he was calm.’ 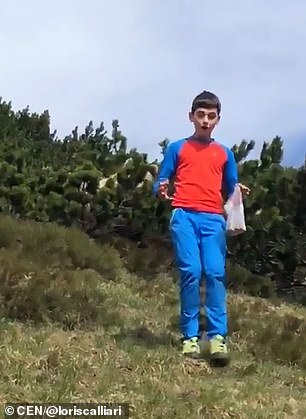 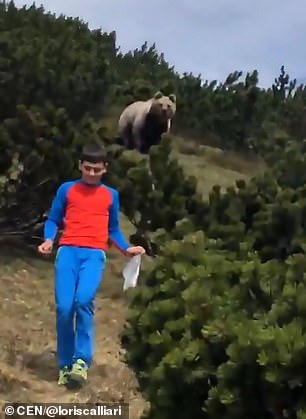 The 12-year-old had reportedly studied how to behave if you come across a bear in the woods whilst reading at home in lockdown, and his uncle said: ‘Animals and forests are his passion.’

The boy, who studies in the village of Sporminore, said: ‘It was important to leave quickly but without making the bear feel it was in danger.

‘I did not look it in the eye and the bear understood I was not its enemy. And now I am the happiest child in the world.’

The bear reportedly left the area and nobody was injured. Local media report the region is home to around 80 or 90 wild bears.