Their parents, Savannah and Kyle O’Malley, and four-year-old sister Poppy, couldn’t touch or hold them for two weeks, and they spent the first three months of their lives in the NICU surrounded by tubes.

Almost two years on, the family and their doctors are stunned: Lochlan and Lex are thriving, and ready to celebrate their second birthday.

Savannah O’Malley, pictured with her boys Lex and Lochlan as they near their second birthday 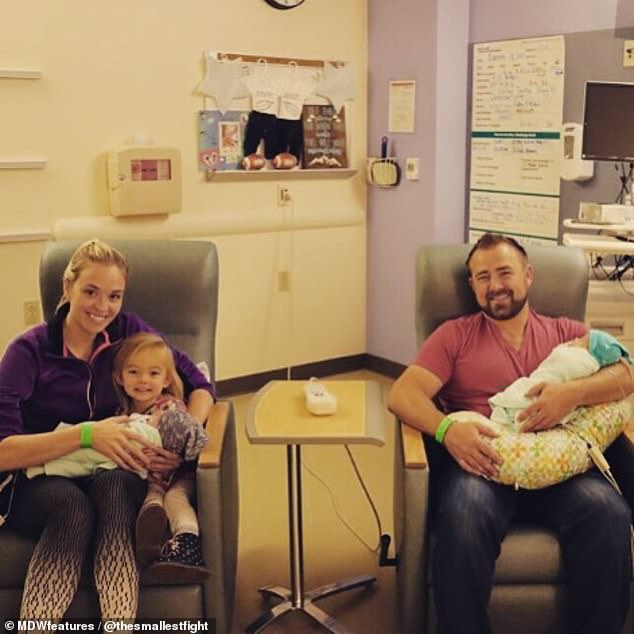 This is the first picture of the family-of-five together, with Savannah, Kyle, their daughter Poppy, and the twin boys 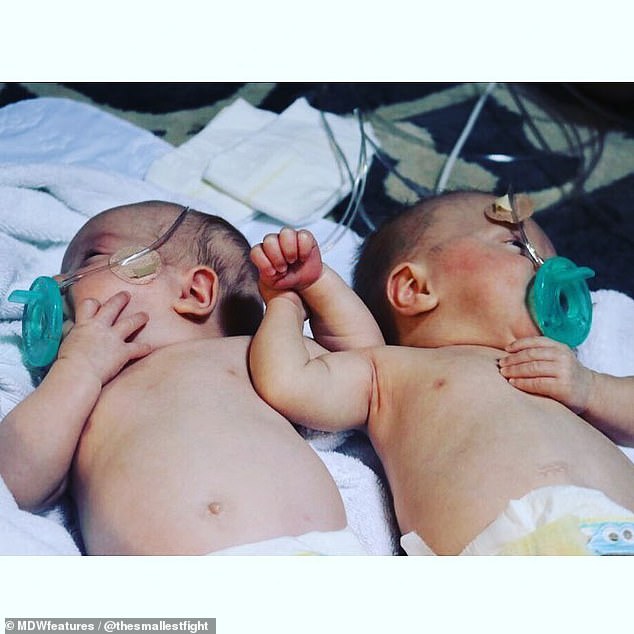 ‘Our warriors continue to defy the odds and I couldn’t be prouder of them,’ their mom Savannah, 34, said.

‘What I have learned while riding the NICU rollercoaster is that statistics are just numbers and that miracles happen every day, especially in the NICU.’

‘Today, you would never know Lex has overcome so many obstacles. He doesn’t walk, he runs. He is funny, curious and absolutely melts my heart.

‘Lochlan is currently in therapy and he perseveres. One neurologist said you’d never know this was the same child by looking at his MRI. Lochlan is incredibly verbal and observant, he makes everyone fall in love with his charm.

‘Although he is developmentally delayed, we don’t expect his neurological situation to limit him in anyway as he becomes a young man. He isn’t held back developmentally; he’s just taking the scenic route.’

Savannah, an artist, went into premature labor with twins at 24 weeks in 2017.

‘I went to the hospital that day to be checked over and expected to be sent home on bed rest,’ she said. ‘I didn’t even know if babies could survive if they were born so premature. We didn’t know the sexes, we didn’t have names planned and we had no idea what rollercoaster was just beginning.’

Doctors couldn’t halt the labor, so Savannah was wheeled in for an emergency C-section to deliver the boys, Lochlan Timothy and Lex Anthony on July 18. 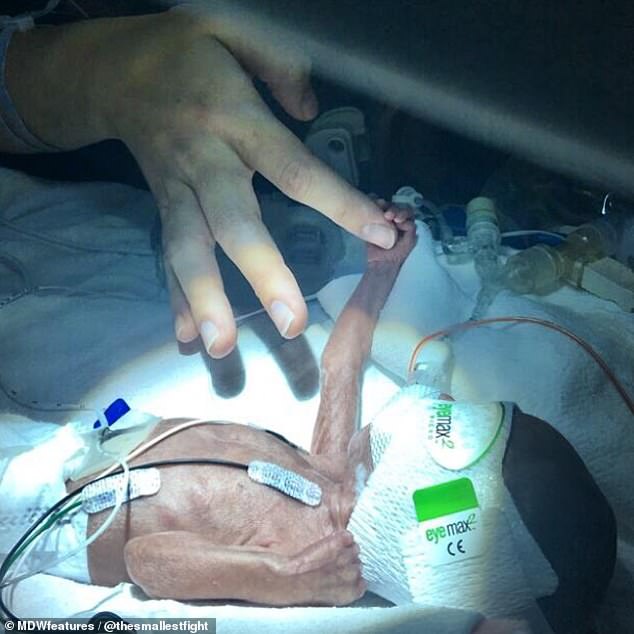 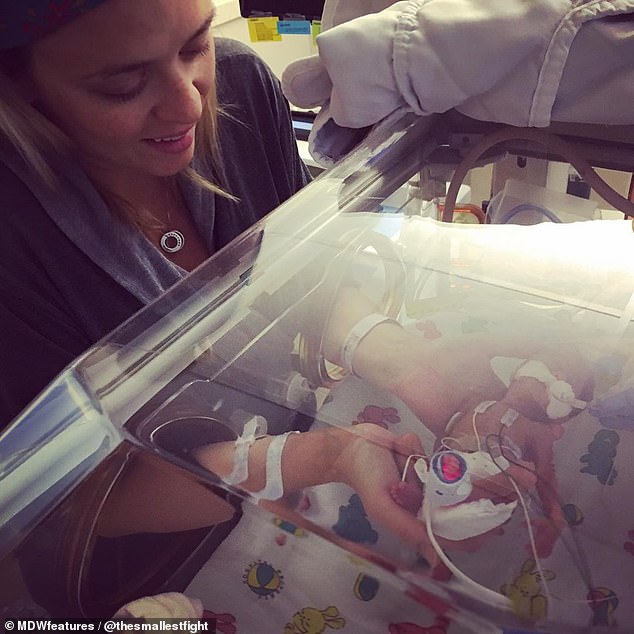 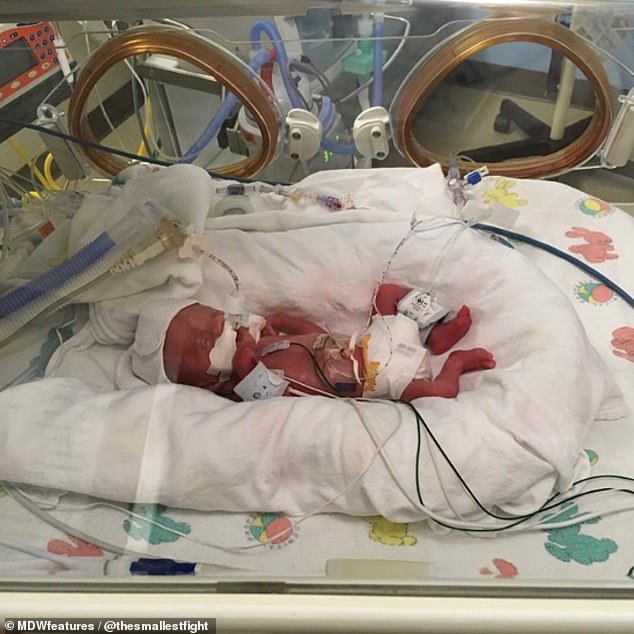 Lochlan pictured in NICU the day he was born. He suffered two brain bleeds

‘The nurses kept saying that our boys were so big, but all I could see were the tiniest creatures I had ever seen. They didn’t even look like humans. Their skin was transparent, eyes fused shut and their arms were smaller than my index finger.’

The boys were given their names when they were a couple of days old, with Lochlan Timothy meaning ‘warrior’ and ‘to honor God’, while Lex Anthony means ‘guardian’ and ‘priceless’.

‘We knew that this would be the greatest fight of our lives and whatever the outcome, our boys were warriors.’

Within a month of being born, Lex required heart surgery, weighing just 2lb.

Both babies developed brain bleeds in their first few days of life, however Lochlan’s was more severe than his brother’s, and he needed a shunt put in.

Then, during surgery, Lochlan had a second brain bleed. It gave him hydrocephalus, a build-up of fluid on the brain, increasing pressure within the skull.

After coming out of their surgeries, the boys had light therapy to ensure that their livers developed sufficiently.

In all, the boys spent the first three months (and change) of their lives in NICU, surrounded by feeding tubes and machines to monitor them. 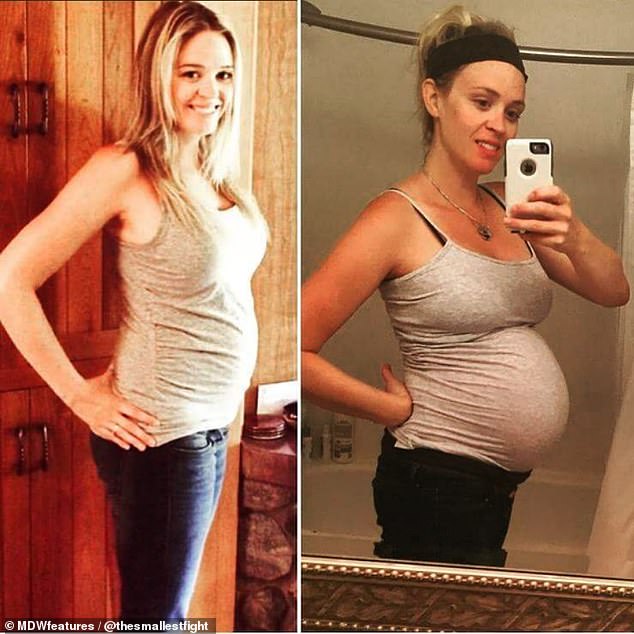 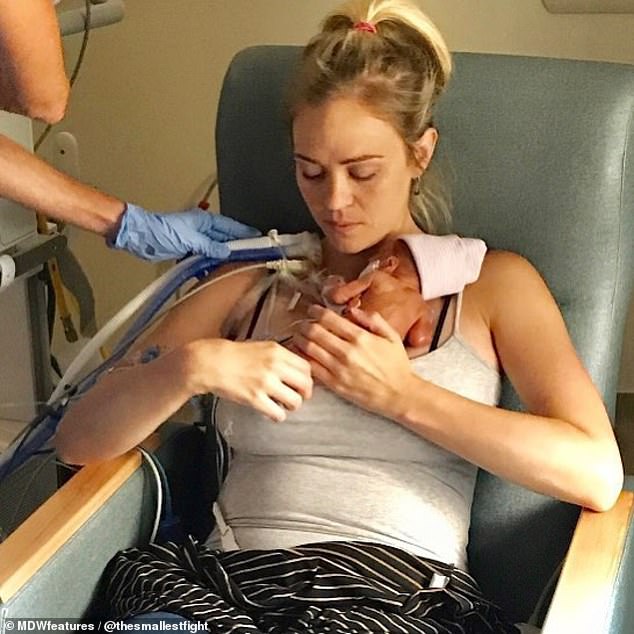 Savannah holding Lex for one of the first times, he was two weeks old and weighed 2lbs. Shortly after, he had to have heart surgery

She and Kyle struggled to divide their time between NICU and looking after Poppy, who was two at the time. Savannah used to leave the house at 4am to go to the hospital, pump milk and check on the boys before returning home before Poppy woke up.

As the family prepares to celebrate the twins turning two years old, they marvel at how far they’ve each come since living on the NICU ward for 100 days.

‘On the second day of life, a nurse told me that it’s two steps forward, one step back with these situations,’ Savannah said.

‘I had no medical background but had so much to learn in a short amount of time. I learned that in certain moments, I had to take everything one breath at a time.

‘In the first couple weeks, we had serious conversations with the complex care team.

‘Feeding tubes and breathing machines were the only things keeping our warriors alive.

‘I was terrified because I didn’t know what this meant and if they would be disabled. Once it set in, I didn’t care what severity the impact was, I just wanted to know my babies would come home.’ 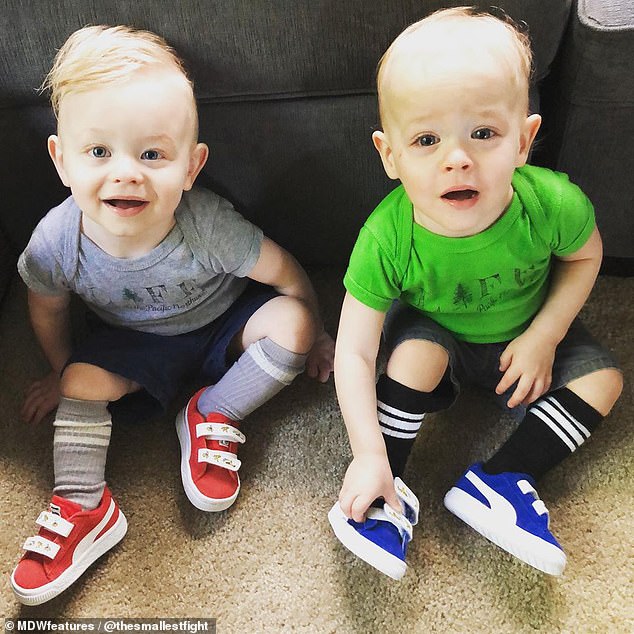 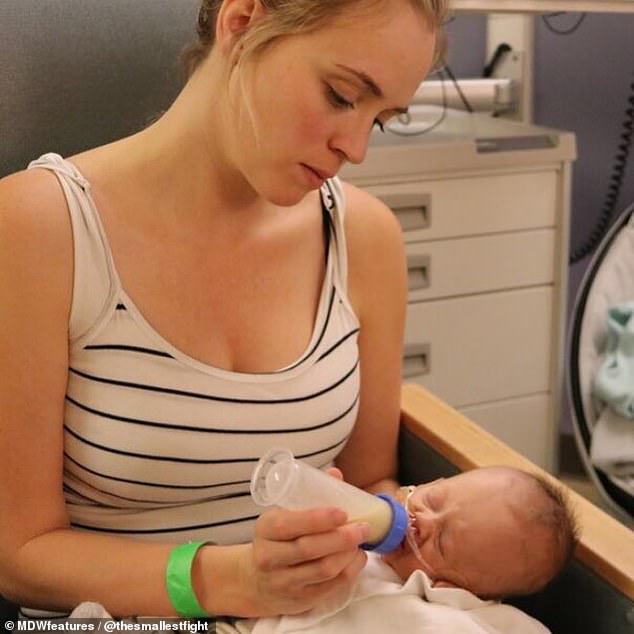 90 days after being born, Savannah feeds Lochlan with his first bottle

Lochlan was discharged after 96 days and Lex went home after 101 days in NICU.

All of this was over a week before their due date.

Savannah began documenting her struggle with micro-preemie twins in NICU on Instagram as a way to express her emotions but also connect with other parents who were dealing with similar emotions.

‘It was challenging because we had a two-year-old-daughter to take care of too,’ said Savannah.

‘I would wake up at 4am or 5am to head to the hospital. I would pump breast milk when I got there, say hello to my boys, get updated on their condition and head home before my daughter work up. She would wake up and Kyle would head to work.

‘The hardest part was that the future was unknown. It was difficult to try to live in the moment. Once I started worrying about the future, I couldn’t handle everything. If I was present, I could manage.

‘While in the NICU, I wasn’t able to fully process the trauma I had been through. It wasn’t until after discharge that I began to feel the heaviness of the situation.

‘Talking about my experience helps me process everything.

‘It also helps to offer hope to other families in similar experiences.’